Personally if I had the Still Life of a laid Table by Flemish artist Jacob van Hulsdonck (1582-1647) hanging on my wall at home, it would forever remind me always of the many fabulous feasts I enjoyed during my lifetime travelling. A master of a prosperous studio in the seventeenth century renowned for his paintings of fruit in particular, Hulsdonck works allowed the onlooker access to the fragile and fleeting moments that he enjoyed in his.

June is a great time to visit that wonderful city founded by the Romans as Londinium, with a core of some 1.12-square-miles. London, the capital of the United Kingdom today in summer abounds with all types of fairs, including those showcasing art and antiques, including Masterpiece London, 30th June – 6th July, the Art & Antiques Fair at Olympia 27th June to 3rd July and the London Art Week Fair, 2016, which will take place July 1 – 8, 2016.

While we are constantly made aware of contemporary art sales in our own time, it is not very often that we are alerted to the sale of period art works of the past, including antiquity, through a fair devoted entirely to their sale. In London for the last four years the London Art Week fair has focused on works of art from our pre-contemporary world, which are available at galleries within a small radius of the historic city, one that has over the centuries supported and represented internationally renowned artists of distinction.

All the galleries are situated in an aspect of the city I know well from my visits to London over a forty year + period, that of St James’s and Mayfair.

Talking about feasts, if you are into mythology and would like to feast with the gods Venus and Bacchus you can through the painting by Huguenot artist Louis Laguerre (1663-1721), who completed many of the wonderful works at Blenheim Palace. If you love sculpture as I do, also appropriately on sale is The Hope Roma by sculptor Vincenzo Pacetti (1746-1820) a favourite with the influential Italian Borghese family and on sale at the Lowell Libson Gallery. The Hope Roma has an impressive Provenance, commissioned, owned and shown by one of the Regency’s most colourful characters the Dutch born London based connoisseur Thomas Hope (1769-1831).

Pacetti was involved in restoring classical sculptures for the Borghese and his original work was inspired by an antique original in their collection and carved from Italian marble during the time of Napoleon’s Continental blockade, which was mostly ineffectual.

A great admirer of Napoleon’s architect’s Percier and Fontaine this work was initially on show in the picture gallery at Hope’s house in Duchesse Street in London, which was open by subscription to select people of means looking for ideas for their own interiors.

It would be Thomas Hope’s book of designs “Household Furniture and Interior Decoration” published in 1807, which would introduce the term ‘interior decoration’ into the English language. 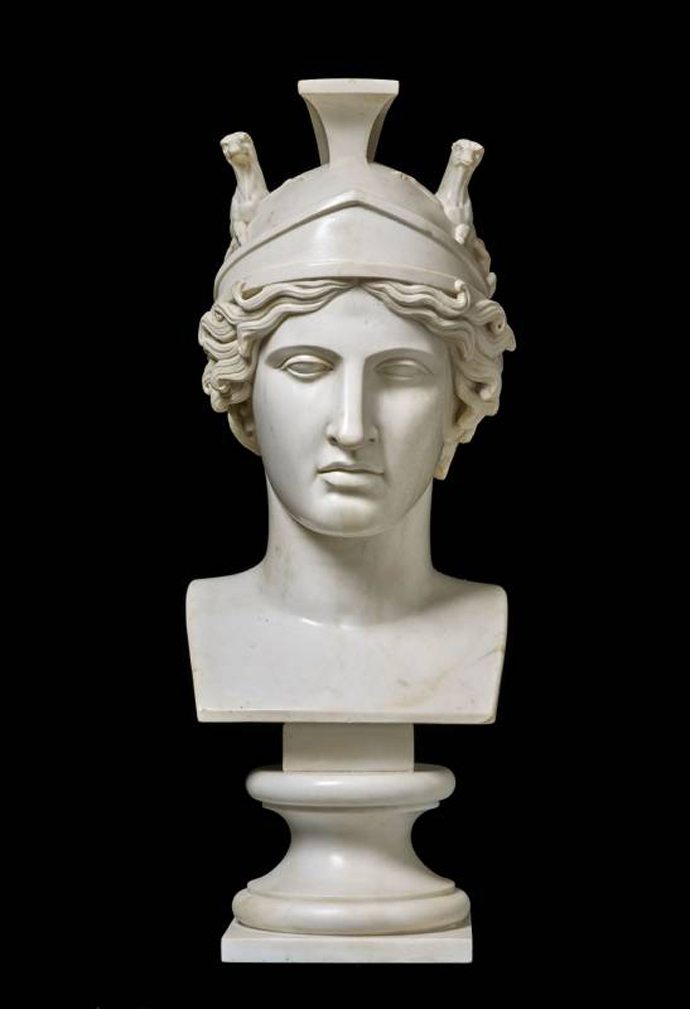 A preview of the London Art Week Fair, 2016 takes place on June 30 where if you have the ready necessary you can also purchase an exquisite sculptural relief of Cupid pursuing Psyche by John Gibson 1790 – 1866 for Algernon Percy, 4th Duke of Cumberland and his Duchess.

Gibson was one of the leading exponents of the neo-classical style, who writing in 1831 thanked God ‘every morning that opens my eyes in Rome’ where he undoubtedly led a charmed life.

Said to be a ‘philosophical allegory of the search of the soul for union with celestial love’ the love that Cupid had for psyche features often in all aspects of the arts down through the centuries.

The London Art Week Fair has proved popular with representatives from major museums around the world as they take advantage of the select pool of pre-contemporary works within a small radius, which they can seek to secure for their institutions.

This year some fifty+ galleries are involved, showcasing paintings, drawings, and sculpture and objets d’art, including works from the Kallos Gallery, which specialises in antiquity. Stars of its collection are a Corinthian Helmet, an Attic Black Figure Lidded Amphora and the bust and arms of a Kore. The Corinthian Helmet is aesthetically more than pleasing to look at, it has the great beauty of form that Greek works from the end of the sixth to the early fifth century BC attained.

Greek Philosopher Plato’s ideal republic was always geared to the requirements of its military strength. The Greek warrior depended heavily upon his sophisticated armour, sword, helmet and shield – which in turn depended on a supply of iron, the needs of war, the spurs of trade. The helmet’s patina today sports the much admired colour green bronze attains with age and is described in the Kallos Gallery notes as “Hammered in bronze in one piece and beautifully patinated … of the ‘Hermione’ type. It represents the latest phase in the three-century development of one of the most recognisable emblems of Greek warfare, manhood, and cultural identity.”

Ancient Corinth was a hub of communication between northern and southern Greece, which became for a long time the puppet of Macedonia when ruled by Alexander the Great’s father Philip of Macedon (382 – 336BCE).

Before that it was engaged in commercial rivalry with Athens and involved in Greek politics for over 200 years, often as a pawn in the struggles between city-states because its citadel was of great strategic value.

Showcasing a battle between the Amazon Queen Hippolyte is a splendid example of archaic black figure vase painting on an Amphora, produced at a time when workshops in the Kerameikos quarter of Athens saw potters and vase painters working closely together. They issued forth pottery decorated with motifs drawing on an inexhaustible mine of Greek myths and epic tales, especially about their great battles.

The Kore (Korai) or a maiden just under life size is characterised by her frontality lack of motion and enigmatic archaic smile, which was produced on sculptures during the Archaic period ca 800 – 500 BCE. This bust according to the gallery notes is ‘… preserved in three separately crafted terracotta elements – modelled head and shoulders, and two slender forearms finished with elegant hands –

Until the C6BCE Greek figures had been quite rigid in their stance, their fists clenched hanging at their sides their legs standing together…. however, a genius for learning, adapting and improving foreign techniques evolved and that meant a break-through from the conceptual to the observed in art. The Greek artist made his way forward toward a representational style, one based primarily on the male nude, which dominated the visual arts of the western world from this time onward for nearly two and a half millennia.

Their development in the six centuries before the Christ event is expressed more in the treatment of drapery than of anatomy on the statue of women.

At this time women had no official part in civic affairs, they were not citizens and men would only consider their beauty if they had straight shoulders, deep bosoms, high muscular buttocks, straight noses and high foreheads.

The details of the folds in their garments on these compelling statues became a matter of importance as were the application of principles of proportion and measurement as they progressed towards a realistic representation of anatomy. My favourite international art magazine in London Apollo notes, “… the (London Art Fair) event stresses the global importance of London’s art trade. The breadth of works on display is impressive.”

A consideration of others is simply right and proper behaviour in any society or culture and under all circumstances. This is 2013 and the world has advanced a long way since the end of World War II in the 20th century, at least in terms of attitudes. On the whole…