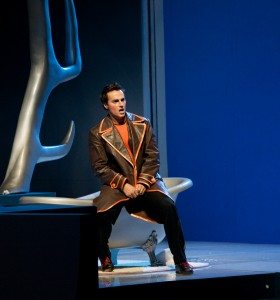 Andrew Goodwin, from all reviews and accounts, has been impressing many people over the past decade in Europe, England and most especially in Russia, where going to the theatre, the ballet, the opera, the orchestra and customized concerts is integral to the art of cultural life.

Andrew, because of a suggestion by his piano teacher that he study voice in Russia, left Australia for Europe in 1999 just in time for the arrival of the new millennium. In that ravishingly beautiful city St Petersburg he attended the Rimsky Korsakov Conservatoire, which has been the training ground for classical musicians for a very long time and, a coveted and cosseted institution under communism.

Since the demise of the old regime the arts in Russia has struggled to regain the level of support they once enjoyed. During that time and despite many difficulties Andrew has been performing strongly alongside his colleagues in many of Russia’s most prestigious musical halls. Now funding has been slowly restored and its performance arts are reaching new heights of success.

Andrew Goodwin graduated from the Conservatoire in June 2005. He sang the role of Lensky in Tchaikovsky’s Eugene Onegin at the Conservatoire Theatre, a rare achievement by a foreigner. He is also now a regular soloist with the St Petersburg Symphony Orchestra and a fine cultural ambassador for Australia on the world stage. According to the Greek lyric poet Pindar, whose poetry illustrates the beliefs and values of archaic Greece on the verge of its classical glory, Orpheus was the father of songs.

In grief for the love of his wife Eurydice, who had died, he played and sang such sad and mournful songs all the gods wept.

This story of Orpheus’s earnest quest to achieve eternal love is one of human frailty and has fascinated composers and librettists over the centuries.

The Pinchgut Opera’s performance of L’Anima del Filosofo is the first production of Haydn’s version of the legendary Orpheus+Eurydice story for Australian audiences. Composed in 1791, the opera was never performed during Haydn’s lifetime with its first performance, surprisingly, was in 1951 in Florence with a cast including Maria Callas and Boris Christoff.

The 2010 Pinchgut production will be simply staged, with a set and costumes and emphasis on the music at the highest level.  The cast also includes the sensational soprano Elena Xanthoudakis singing the double part of Eurydice/Spirit. 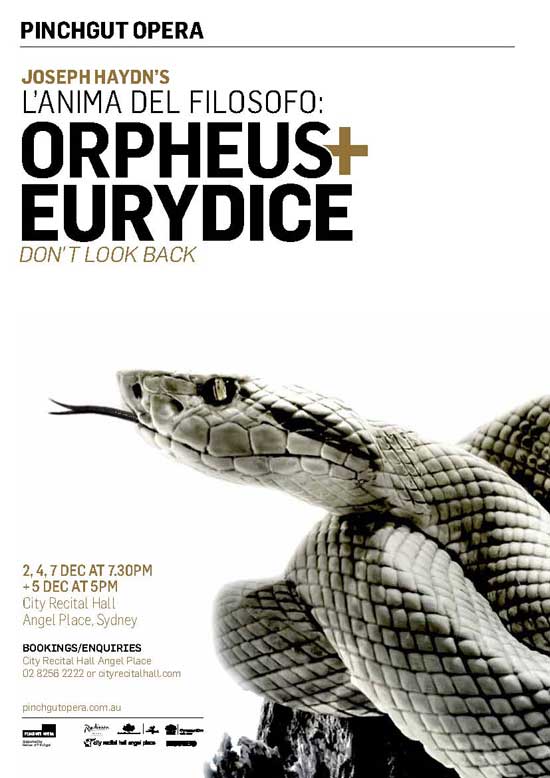 The opera makes extensive use of the chorus, which will be Cantillation, and Antony Walker will conduct a classical orchestra (Orchestra of the Antipodes) that will include Erin Helyard playing fortepiano.

L’anima del filosofo is an opera in Italian in four acts by Joseph Haydn, the last he ever wrote. The libretto, by Carlo Francesco Badini, is based on the myth of Orpheus and Eurydice as told in Ovid’s Metamorphoses. 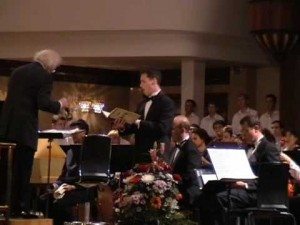 In 2006 he was involved in the world premiere of Rodion Shchedrin’s Boyarinya Morozova in the role of Avvakum (Big Hall of Moscow Conservatoire) and in 2008, he took part in the performance of George Palmer’s Mass Benedictus Qui Venit at Sydney (world premiere).

He has also formed a duo singing that mesmerizing genre of European romantic art songs Lied with Daniel de Borah, whom he met when students at St Petersburg. They have forged a close musical partnership and perform regularly in recital, including here in Australia this November.

Andrew Goodwin was born in Sydney, Australia and began learning the violin at the age of 5. While singing in St. Andrew’s Cathedral choir he continued learning the violin, piano and the organ, one of the world’s most difficult instruments to play.

He was a finalist in the 2004 Australian Singing Competition and won the Nelly Apt Traveling Scholarship to attend the International Vocal Art’s Institute at Tel Aviv in Israel. In April 2004 he won the Amber Nightingale singing competition at Kaliningrad in Russia. In November 2005, Andrew received 2nd prize in the Elena Obrastzova Singing competition at St. Petersburg where he also won the prize for best German Lieder. In March 2006, Andrew received 2nd prize in the Opera Foundation Australia singing competition and has successfully auditioned to begin a postgraduate diploma in Vocal studies at the Royal Academy of Music.

Brazilian Modern: The Living Art of Roberto Burle Marx at the NYBG, is an immersive experience, with a variety of colors and textures, capturing the imagination