George Gordon Noel, 6th Baron Byron (1728-1844) with his aristocratic demeanour, personal charm and undeniable beauty stands out as a rock star poet and the prince of passionate people’s perceptions in the art, design and style of the so called Regency era in England (1792 – 1830).

Lord Byron was described in his own time as ‘a child of passion and the fool of fame‘. Was he the very image of what a poet should be?

The relationship between art and science and the romantic’s simultaneous love and fear of scientific discoveries is of the most interesting cultural exchanges abroad during the early years of the nineteenth century. This was an age of extravagances and of the arts and sciences? The brief span of Lord Byron’s life encompassed an era whose turbulence mirrored the poet’s own stormy existence.

It was also an era about architects and artists, romantics and revolutionaries as well as charming celebrities – an age of paradox, one in which extremes met.

Lord Byron wore his hair short, letting it cluster at the front in what are now known as Byronic curls.

When he entered a room women swooned dead away, confirming his status as the first rock-star poet. It was during the 1790’s at universities in England that fashionable young blades began cropping their hair, wearing it unashamed in its natural state and colour, unwaxed without powder when they went out. They were given the nickname, the Apollo’s.

In France a taunt at the rich leading up to the revolution was all about depriving the poor of bread, by using the only flour that was available on their heads. So the abandonment of the wig and powder in France became a fait accompli.

Byron created a romantic fashion of casual elegance with open necked shirts and silk lounging garments. He had a rival in the good looks department – Sir Humphrey Davy (1778 – 1829), who preferred the Augustan curl inspired by the hairstyles on the busts of first century Roman Emperor, Augustus. He was also, my dear, quite the rage.

Inventor of the Davy Safety Lamp, Sir Humphrey pioneered work in electro chemistry and his apprehension of the physical universe was couched in such elegant and eloquent terms that he excited and inspired poetic imagination, making him the quintessential ‘rock star’ scientist of England’s romantic and revolutionaries age long before Brian Cox.

George Ticknor, an American visitor and recorder of London’s Regency life, called Davy ‘one of the handsomest men I have yet seen in England’. So it seems that brains and beauty can go together. 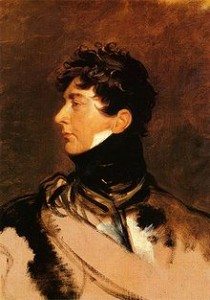 George, Regent of England and Prince of Pleasure George IV as a Voluptuary by James Gillray

George Prince of Wales with his friend Beau Brummel led the fashionable London set, as the many and varied new natural short hairstyles exploded onto the local scene.

This uncomplicated coiffure must have been so much easier to wash for boys of the Ton a group of pleasure seekers who lived to enjoy the delights of ‘the season’.

This sensible new hairstyle was surely far less prone to harbour, in its depths, the many undesirable aliens abroad at the time.

It was also an advance from the previous generation, who had shaved their heads and worn wigs because they did not have the benefits of a supermarket shampoo to help keep those pesky critters, who did not care one dot if you were a celebrity, at bay.

First as Prince of Wales, then as Regent and lastly as King, George IV was ridiculed by his contemporaries for his gut, his ego, his pretensions, extravagant passions, clumsy love affairs and disastrous relationships.

In short he made himself a target for satirists and cartoonists with his face a mask of rouge and grease paint. His image of a glutton by James Gillray is the antithesis of Lord Byron’s incredibly dashing portrait, painted by Thomas Phillips.

It depicts Lord Byron in Albanian dress, one of a number of costumes he purchased in 1809 at a cost of 50 guineas each. His colleague poet Samuel Taylor Coleridge said his countenance is ‘so beautiful...his teeth so many stationary smiles – his eyes the open portals of the sun…his forehead…passing from marble smoothness into a hundred wreathes and lines and dimples correspondent to the feelings and sentiments he is uttering’.

Byron lived his life hard and fast, and before his death at the age of 36 said that he felt himself to be an old man.

He died miserably at Missolonghi a town in western Greece where he was basically bled to death by courtesy of his doctors, whose profession was only just starting to emerge from previously appalling medieval medical practices and, at a time when mountebanks reigned supreme.

In dying for liberty and freedom, a cause so dear to the hearts of the English establishment, George Gordon Noel, 6th Baron Byron became one the most heroic figures of his age.

Ironically he was training troops for the liberation of Greece, where civilization had been expanded five centuries before Christ in an atmosphere of classical columns and a culture of creative ideas. Lord Byron’s seamy reputation remained intact following the burning of the only copy of his memoirs by his publisher. Other interested parties had quarreled over the ownership of the manuscript.

They said they were concerned about the pain unexpurgated memories would cause Lady Byron, his child and half sister, Augusta Leigh. However the publisher surely thought of the damage it would do to his further sales of Byron’s works and so he cleverly confined it to the ashes of life.

Thy vows are all broken,
And light is thy fame
I hear thy name spoken
And share in its shame

In secret we met;
In silence I grieve
That thy heart could forget,
They spirit deceive

If I should meet thee
After long years,
How should I greet thee?
With silence and tears

Despite all the work Louis XIV was to complete at Versailles in his own time it was called le Chateau, which means a Gentleman’s seat never palace, as it became