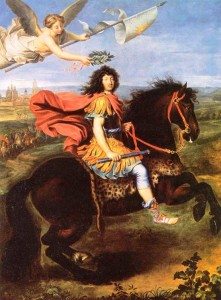 Louis XIV (1838 – 1715) was known for being dignified, gracious, exquisitely polite and never blamed his generals for a defeat. His reign 1661 – 1715 was of incomparable brilliance. French art and literature flourished and artisans, included the celebrated playwright Jean Baptiste Poquelin Moliére (1622-1673), dramatists Pierre Corneille (1606-84) and Jean Racine, (1639-99) and Baroque composers Giovanni Battista Lully (1632-87) and Francois Couperin (1668-1733). History painter Nicolas Poussin (1594-1665) and landscape artist Claude Gelée (named Lorrain) were also very influential. Louis founded the Academy of Painting and Sculpture in 1648 and bought the Gobelins tapestry factory in 1662. In 1664 he founded the Royal Academy of Architecture and the original Academy of Painting and Sculpture became the Royal Academy of the Arts. He excelled at sport and spent hours every day hunting or shooting, or, riding to war. Even in old age, the year before his death, he brought down thirty-two pheasants with thirty-four shots a considerable feat with a primitive gun. Keeping up with him must have at times been overwhelming for everyone.

Outlander Series 3, Episode 2, we find Jamie Fraser (Sam Heughan) hiding out in a cave deep in the woods nearby to Lallybroch and it’s a prison of body and mind