Francois Boucher (1703-1770) and his fellow artists in eighteenth century France achieved a basic nobility of design that served a greater human need, for that of a life where such qualities as good sense and a good heart became as important as the search for freedom. Produced in collaboration with the ARC Centre of Excellence for the History of Emotions 1100-1800 and The University of Melbourne, the National Gallery of Victoria is presenting at the NGV International, the desirable exhibition Love: Art of Emotion 1400-1800 now on show until 18 June 2017. It will help us as arts and cultural historian Sir Kenneth Clark recorded, to ’… reconcile the two parts of our being, the physical and the intellectual.’

If love is said to exist, in all circumstances, then we could infer that so do objects of love, which present as a social and cultural journey filled with beautiful images that tell fascinating stories of our evolution through time.  The Madonna of Humility became fashionable throughout Europe in the thirteenth century because it represented the humanity of Christ.

By an unknown artist and rendered in painted wood and seated on the ground as she looks down at him tenderly you are completely undone by the brilliant ability of the artist to create that connection and bond between a mother and her baby, no matter what her status.

For me this work brings to life the notion that ‘…ever since the creation of the world, the invisible existence of God and His everlasting power have been clearly seen by the mind’s understanding of created things’.* Another painting at the NGV, which depicts Carlo Broschi Farinelli (1705–1782), the most famous singer of his day shown enjoying life with a group of his intimates, has always drawn me to examine it in detail.

I love that we know who they all are and like all of us, they all had active lives they led separately and shared with joy when they came together.

Farinelli was a castrato with a voice of dazzling range and flexibility equivalent to that of a woman soprano today. He was in much demand by the opera companies throughout Europe. It was the last time they would be together and this happened between 1750-1752 when they were all in Madrid. Farinelli was at the time living and singing at the court of King Ferdinand VI (1713-59) who awarded him the military Order of Caltrava he is wearing. Tony Ellwood, Director, NGV, commented, ‘Love: Art of Emotion reveals hundreds of powerful depictions of love in art from 1400 to 1800, from Antonio Vivarini’s much-celebrated painting The Garden of Love, c. 1465-1470 to an intricately carved sixteenth century wedding dowry chest. Drawn from every area of the National Gallery of Victoria’s collection, this exhibition will offer an incredibly rich and diverse display of works, placing the NGV’s holdings in surprising new contexts’, he said. The Garden of Love, purchased in 1948 has undergone a lot of changes since it was first completed in oil, with tempera and gold on a spruce panel and is one of the works attributed to Venetian painter Antonio Vivarini (1415-1480) or an artist of his school.

Vivarini was one of a family of painters, whose works were often displayed in architectural settings. His major works during the first half of the fifteenth century were produced in collaboration with his brother-in-law, Giovanni d’Alemagna and when he died in 1449, in conjunction with his younger brother, Bartolomeo in Padua. His son, Alvise was the last of the famous family. Anticipation focuses on courtship, flirtation and seduction showcasing images of the god of love and desire Cupid whom the first century Roman poet Ovid delighted in portraying as a willful and capricious child in many poems, from the Amores and Art of Love. “Cupid’s there, quiver reversed, bow broken,
Holding a burnt-out torch.
See how sadly he walks, poor child, wings drooping,
How he beats at his bared breast,
How the tears rain down on his hair, now lying all tangled
About his throat, and his mouth’s a loud O of grief.
Thus he looked, they say, long ago, when he saw his
Brother Aeneas to the grave…” 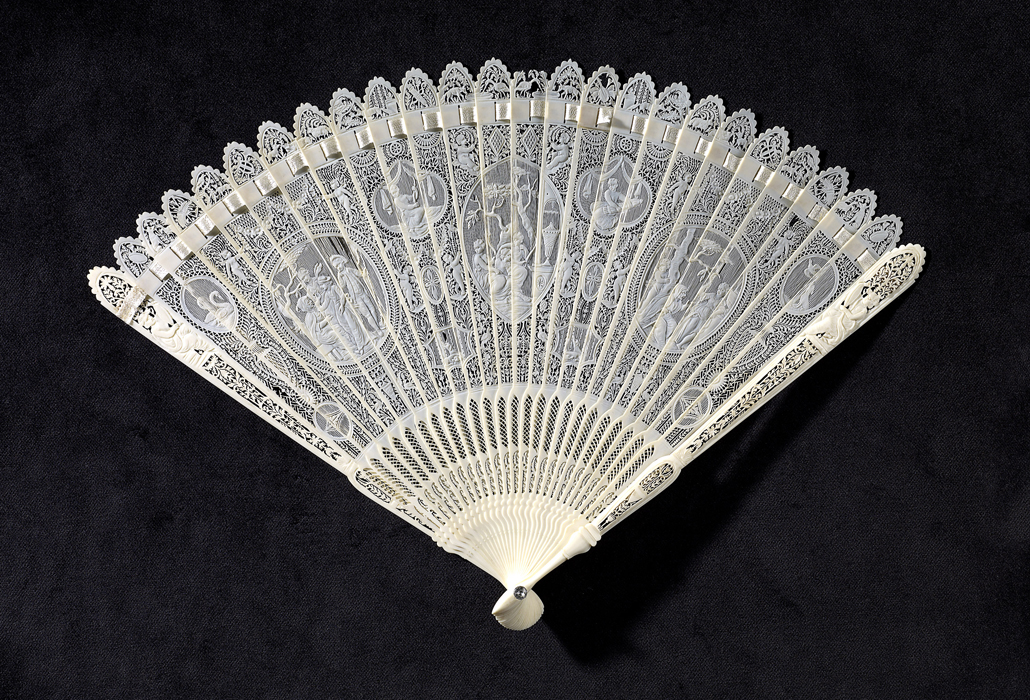 The idea Cupid was a child with wings appealed to poets and artists throughout the ages. Viewers will be sure to admire the porcelain sculptures of Venus and Cupid, showcased alongside delicate folding fans, which were often gifted as love tokens throughout the 1700s. During the eighteenth century in the language of fans, when you placed a fan near your heart it meant to the observer that ‘you have won my love, while hiding your eyes behind an open fan meant ‘I love you’. Realisation examines acts of love: marriage, motherhood, religious ceremonies and charities. The tender family portrait Mother and Child, 1624, by Cornelis de Vos depicts a woman from a family of means and her child. The mother is wearing a gown made from the penultimate fabric of the period cut velvet, inset with what looks like a panel of cloth of gold in a statement of high status.

Her glorious gown is enriched with lace, a multi-tiered ruff at the neck and exquisitely styled cuffs, and she is wearing stunning jewels in her hair, on her ears, wrists and fingers. She is holding a richly embroidered pair of gloves and sporting a gold cross and chain on her bodice indicating her piety. The child is also beautifully attired, wearing a lavish costume and clutching a handful of cherries, a luxury of the time and a reward perhaps for standing still.

The painter’s skill is highlighted. Cornelis de Vos was at first one of the leading portrait painters in Antwerp. Known for his sensitivity he was elected high Dean of the Guild of Saint Luke because he was a man who brought great pride upon his city giving it a high profile in Europe. Later a history and genre painter he collaborated with fellow artists including Peter Paul Rubens. The painting while focusing at first on the material world depicts members of a family whose lives were dictated by the social forces in play particularly in regard to self-presentation. The portrait has subtle layers of meaning for the viewer to find; the chair has arms, a symbol of status and luxury at the time, and the cherries whose colour is red echo the colour on her gloves and of the upholstery on the chair she is seated upon, red the colour of passion and love Remembrance reveals the complexities attached to relationships, known to have an impact on memory, longing and sentiment.

Rings, which represent the enduring qualities of true love, are perfectly symbolic of those we have loved and lost. An enduring custom for wearing rings to remember friends and family was integral to the customs associated with aristocracy for centuries. Some incorporated lockets of loved ones’ hair, the loved one’s image or images symbolic of mortality such as urns and weeping willows. A stunning ring of gold, crystal and enamel made mid to late in the seventeenth century, has been remounted in the nineteenth century commemorates King Charles 1 [1600-1649] who is said to have possessed in full measure the charm and charisma lacking in his father. As his father before him Charles 1 believed firmly in the divine right of Kings but unlike him, did press his claim and it cost him his head. He did however have a profound influence on English craftsmen on every level of the decorative arts, especially painting as patron to two of the 17th centuries greatest painters, Flemish artists Sir Anthony Van Dyke (1599-1641) and Peter Paul Rubens (1577-1640) who was a friend of kings, princes and rulers of the major European countries. They reflected a seventeenth century community that supported a society in which corporate effort for the public good was rewarded by a booming economy, combining scientific investigation with visual delight. Rubens was one of the most creative figures of his age and his life and work is an eloquent testimony to both the spirit and history of the period. While you are at the NGV International viewing this stunning exhibition, do also take on the Language of Ornament on the second floor they are exceedingly complimentary, one to the other.

THE LANGUAGE OF THE FAN

1) THE FAN PLACED NEAR THE HEART “You have won my love.”

2) A CLOSED FAN TOUCHING THE RIGHT EYE: “When may I be allowed to see you?”

3) THE NUMBER OF STICKS SHOWN ANSWERED THE QUESTION: At what hour?”

4) THREATENING MOVEMENTS WITH A FAN CLOSED: Do not be so imprudent”

5) HALF-OPENED FAN PRESSED TO THE LIPS: “You may kiss me.”

6) HANDS CLASPED TOGETHER HOLDING AN OPEN FAN: “Forgive me.”

7) COVERING THE LEFT EAR WITH AN OPEN FAN: “Do not betray our secret.”

9) SHUTTING A FULLY OPENED FAN SLOWLY: “I promise to marry you.”

11) TOUCHING THE FINGER TO THE TIP OF THE FAN: “I wish to speak with you.”

14) OPENING AND CLOSING THE FAN SEVERAL TIMES: “You are cruel”

20) PLACING THE FAN BEHIND THE HEAD: “Do not forget me”

21) PLACING THE FAN BEHIND THE HEAD WITH FINGER EXTENDED: “Goodbye.”

23) FAN IN LEFT HAND IN FRONT OF FACE: “I am desirous of your acquaintance.”

25) DRAWING THE FAN ACROSS THE FOREHEAD:” You have changed.”

26) TWIRLING THE FAN IN THE LEFT HAND: “We are being watched.”

27) TWIRLING THE FAN IN THE RIGHT HAND:”I love another.”

28) CARRYING THE OPEN FAN IN THE RIGHT HAND:” You are too willing.”