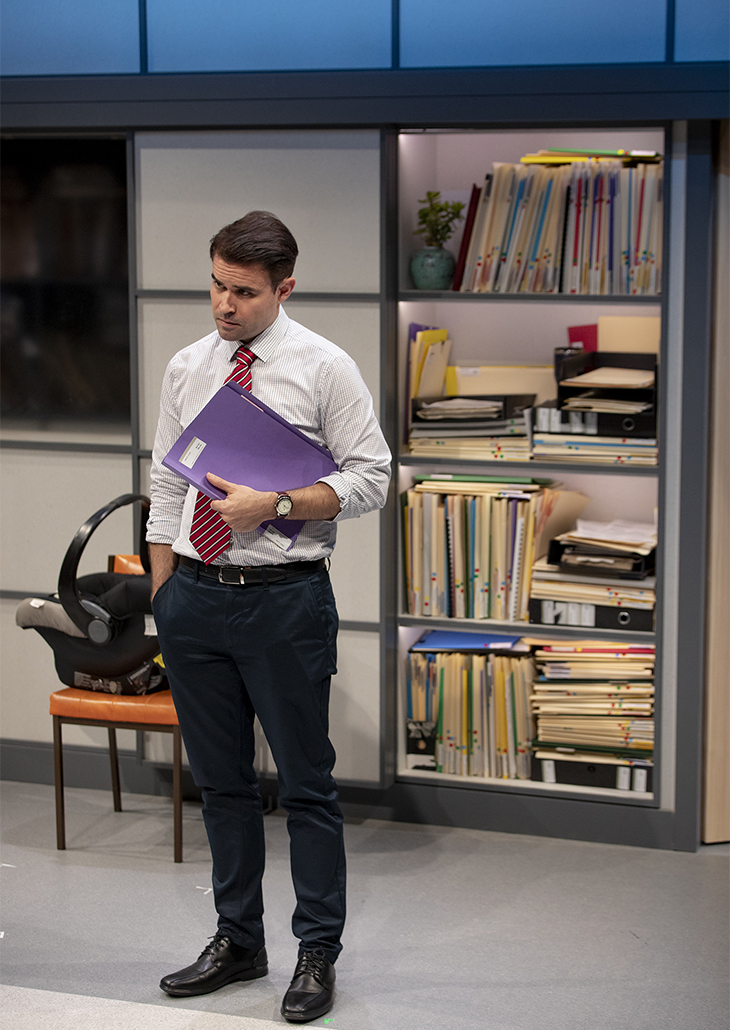 Rebecca Gilman is an American playwright who was a finalist for the 2001 Pulitzer Prize for her play The Glory of Living. Her gripping play Luna Gale had its world premiere at the Goodman Theatre, Chicago, Illinois in 2014. Fortunately for Sydney audiences, Luna Gale is now enjoying a season at the Ensemble Theatre, Kirribilli in Sydney. This is a very fine example of contemporary playwriting at its very best.  Rebecca Gilman demonstrates her astute understanding of human frailty and the way communication can become a tool to extract meaning or conversely corrupt meaning.

She has a deep understanding of motivation, the consequences of abuse and actions of denial are meticulously crafted in the way she renders confronting issues accessible to the audience.

Through her discerning script of sharp dialogue, character depiction and compassion she skilfully and subtly invites audience members to become advocates. 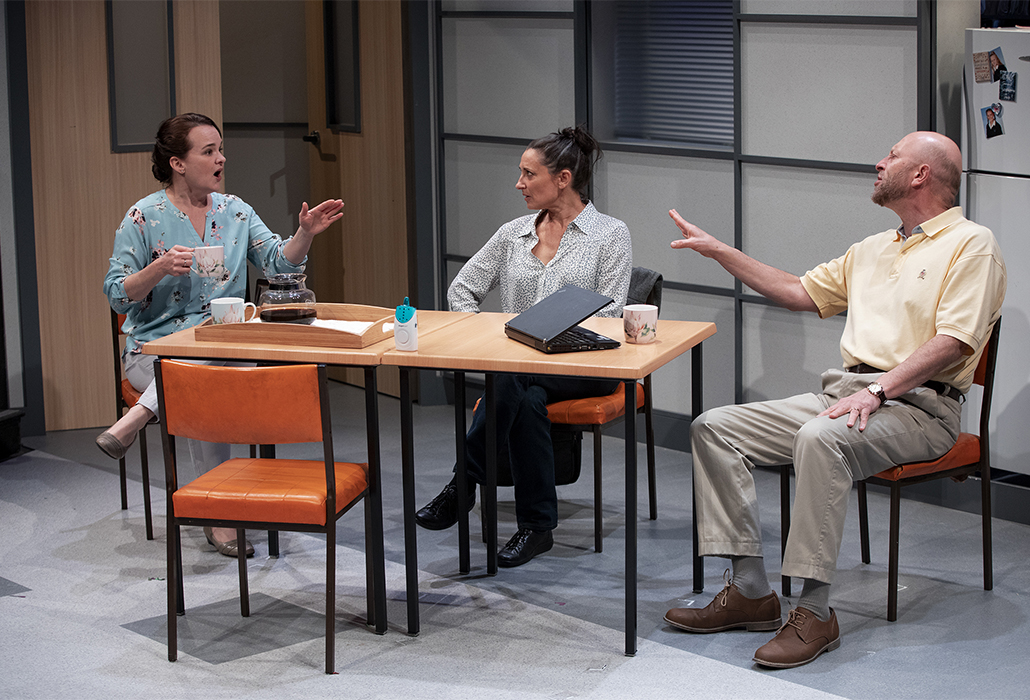 Rebecca Gilman has composed an emotional play, one that resonated with the audience to such an extent they were cheering and clapping throughout scenes.

The play is confronting but powerfully and intuitively real. Ethical conflicts are explored with sincerity, perseverance and humility. Core values are exploded by abuse and linger in addiction.

In the play Gilman investigates the universal issues of child protection, the social and moral dilemmas that arise from the quest of finding the best placement for newborn baby, Luna Gale. 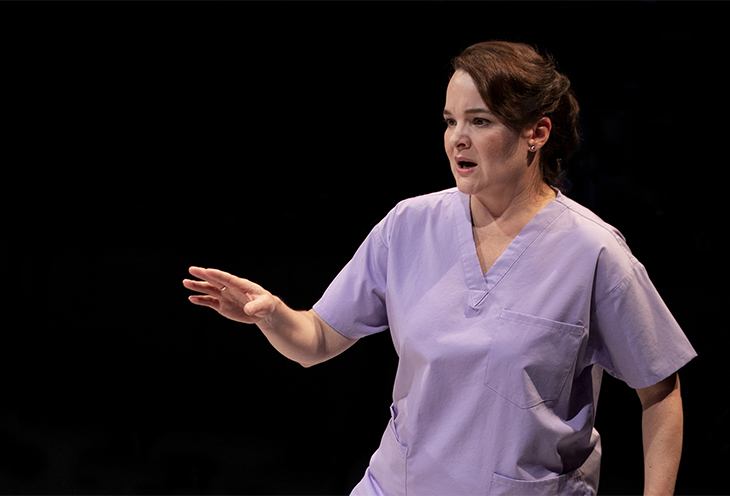 It is complex and absorbing theatre where the seven characters’ ambiguities create conflict and unnerving tension. The precious baby, a very new human being is relying on these enigmatic characters, her future hangs fragile in the wind.

The play opens in a hospital waiting room where the baby’s meth addicted nineteen year old parents Karlie and Peter are high. Their baby, Luna is severely dehydrated and on intravenous fluids. 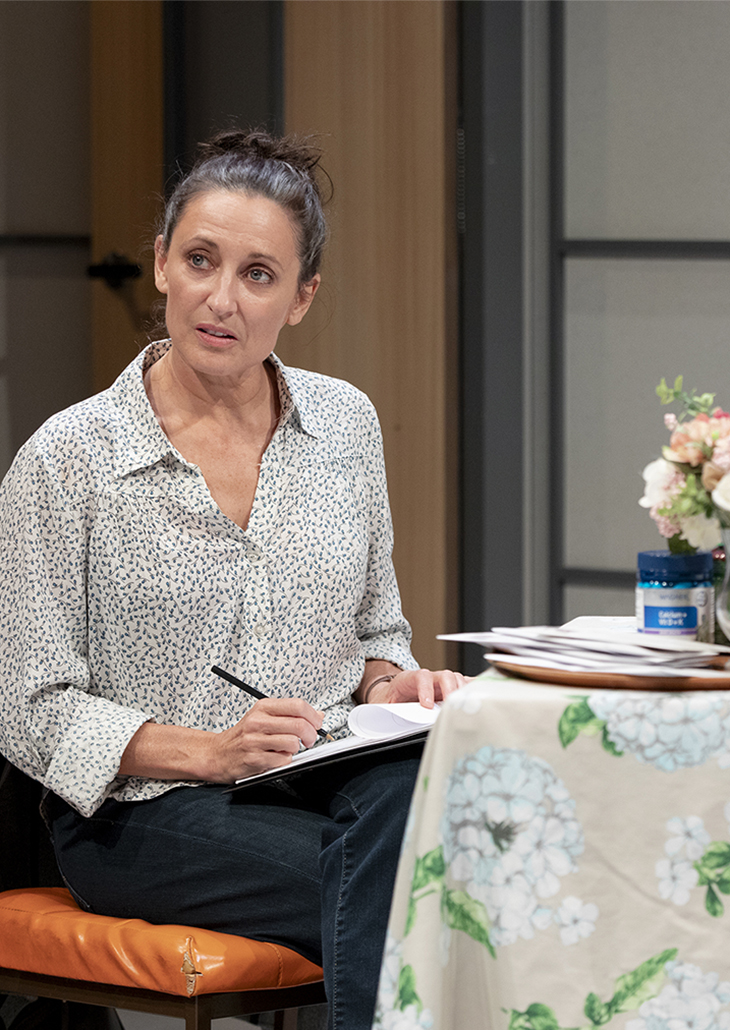 Caroline a veteran social worker, who has been slogging tirelessly in the Department of Human Services for twenty five years, meets these two teenage addicts. She begins to contend with the complicated process of protecting baby Luna and finding the best possible carers for her.

This process is besieged with issues, secrets, double standards, religious and non-religious bias and redemption.

Luna is temporarily placed in ‘kinship care’ with Cindy, Karlie’s mother while the under resourced practicalities of rehabilitation and counseling are organized for Karlie and Peter.

This arrangement is fraught with unseen difficulties, confidences are exposed, past traumas emerge, motives are revealed and judgments waver.

Caroline faces not only the complications of all parties involved in Luna’s future but her own underlying traumas surface. The politics and religious affiliations of Cliff, her bureaucratic and ambitious boss compound her responsibility for resolving the most appropriate outcome for the baby. 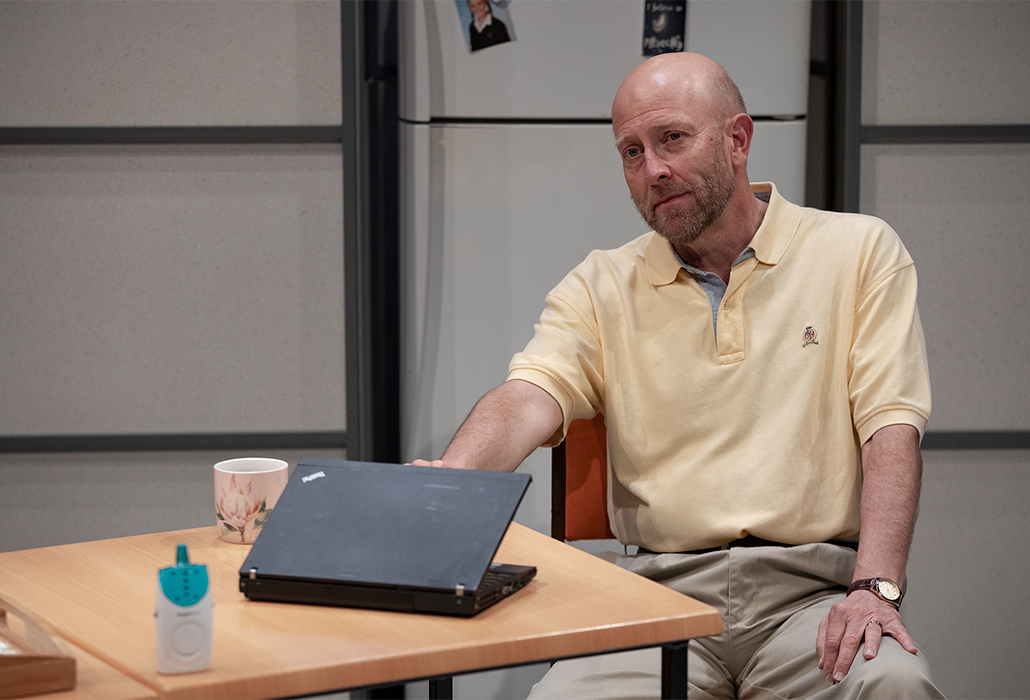 Pastor Jay is not only Cindy’s ‘wonderful’ pastor but a colleague/friend of Cliff and their allegiance is controlling and coercive. Intimidation and bullying are weapons Caroline is accustomed too. Although seemingly submitting to their tyranny she is always vigilant and a powerful force of her own.

She rigorously conducts her investigations, uncovering truths and dealing with insidious bias and system short falls. Amidst the chaos a further tragedy underpins the evolving drama. The twists and turns within this prudently constructed play are always intensely purposeful and often very sad. 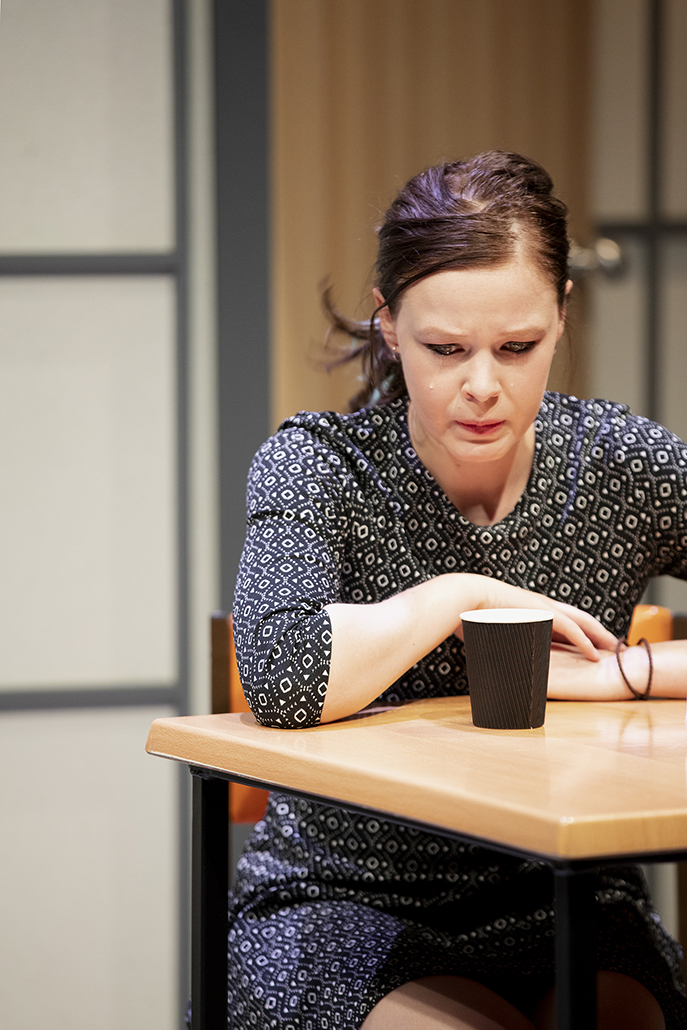 Star Director Susanna Dowling has successfully put her unique style and stamp on this production of Luna Gale. She has interpreted the script perceptively and implemented her vision with clarity, ever mindful of the intricacies and sensitivities of this very important play.

Dowling navigated the scenes building the tension and the unfolding revelations with both wisdom and assurance.

Guiding the actors, where their words and actions at appropriate times connected with the audience, she created a comedic sense that moderated the more serious subjects of the play.

The play has many scene changes, and Set and Costume Designer Simone Romaniu, innovatively met the daunting challenge by constructing a very functioning and clinical ambience. 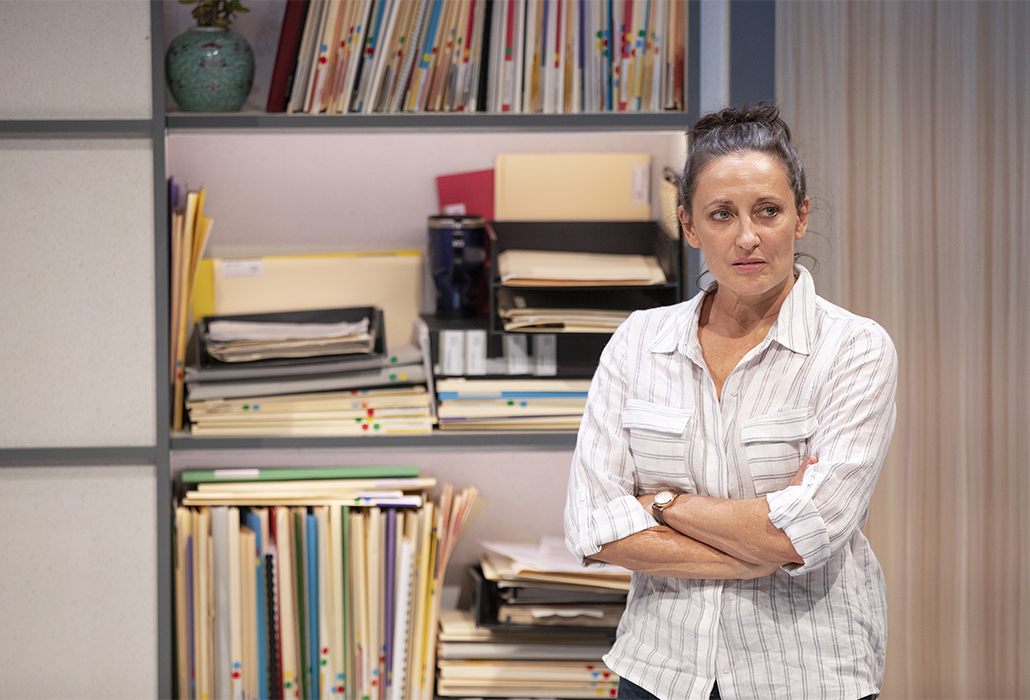 The impressive cast was led by one of Australia’s leading and most celebrated actors Georgie Parker. Her portrayal of Caroline captured her dogged determination and conveyed her insight into human behaviour, emotional responses and influences on actions.

Georgie was finely tuned to the idiosyncrasies, motivations and the realism of this underrated role in our society. She was steadfast in her performance retaining a sense of understated compassion. She was grounded and generously assembled the framework for this significant and influential play.

A commitment to the role of Karlie in her debut role at the Ensemble Theatre for Lucy Heffernan was a reflection of her innate talent and interpretive skills. The mannerisms and behaviour of a young drug addicted women underscored the pain within. 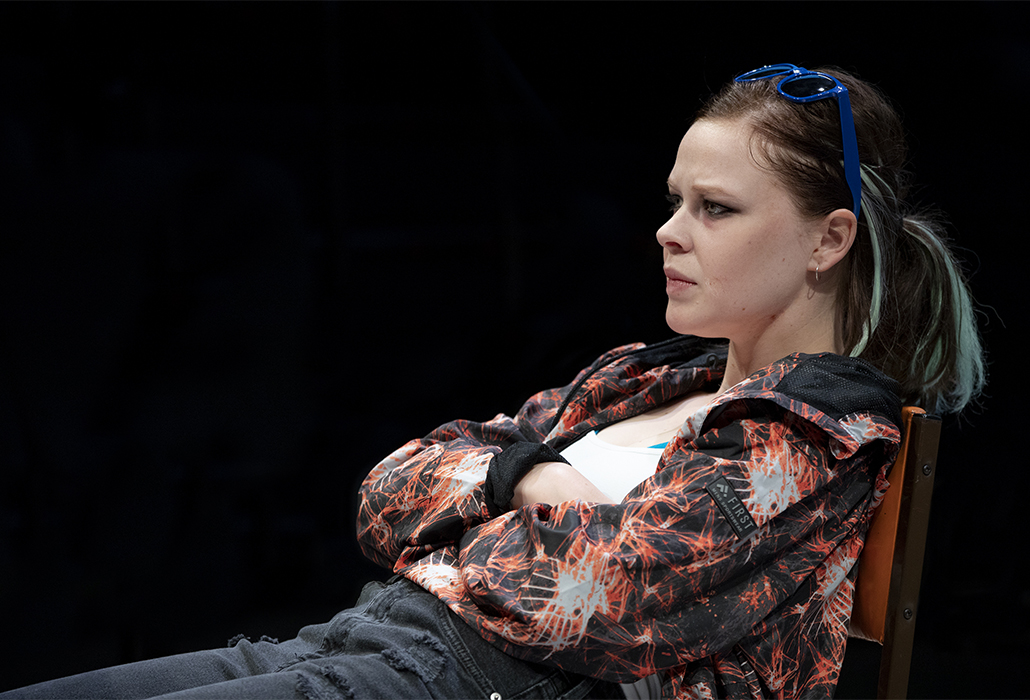 The pathos and genuine desire to care for his daughter were sensitively delivered by Jacob Warner in his performance of the distraught father of Luna Gale. His ability to articulate the anguish and betrayal within his partner’s life is poignant and wise.

The performances by Michelle Doake (Cindy) Scott Sheridan (Cliff), Ebony Vagulans (Lourdes) and David Whitney (Pastor Jay) are polished, as they convincingly develop the attributes that bring their believable characters to life.

Luna Gala is a fine example of a very strong theatrical performance, addressing challenging issues we all share that cannot be ignored. 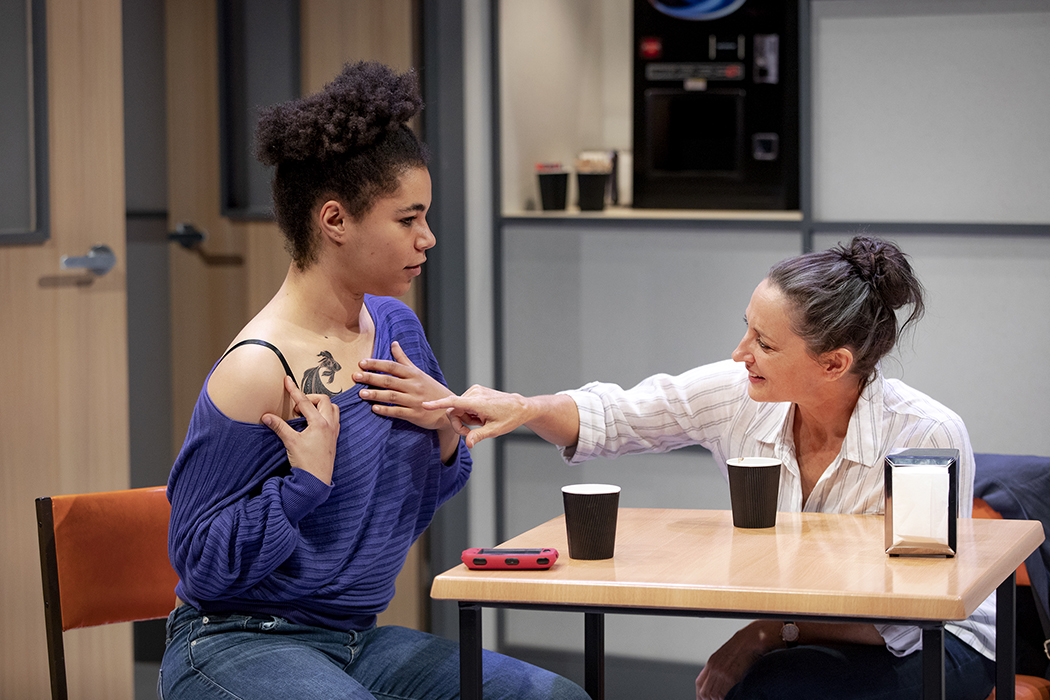 Ebony Vagulans as Lourdes and Georgie Parker as Caroline in LUNA GALE, photo by Phil Erbacher

This play has all the hallmarks of the fragility and vulnerability of life and I unequivocally recommend this compelling, influential production.

Those words, Australian Fashion. What do they mean to you? Well, when I heard the National Gallery of Victoria (NGV Australia) would be showcasing 200 years of Australian Fashion at Federation Square, I did wonder what would be on display, and what Oz fashion really meant to me? I have…