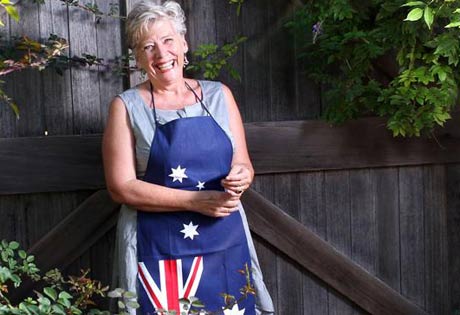 Maggie Beer A.M., all you have to do in Australia is to say her name and people perk up and smiles broaden. This much-loved iconic foodie, the ‘cook’ who gives the great chefs of Australia a reason to smile, is an integral aspect of the Barossa Valley and the Australian fine food tradition. She is one of our best-known favourite food personalities, who in her personal and very passionate pursuit of excellence in all aspects of food and its production has for over four decades, and over all four seasons of the year, excelled.

Responding to my enquiry about what she values and treasures most at Christmas Maggie said... “Having inherited the tradition of a feast of beautifully simple food from my own parents, it is so important to me to continue that tradition for my children, and now my grandchildren. We keep it really simple so there is no fuss or bother, with everyone chipping in so that much of the preparation is done the night before. Our favourite Christmas’ are when we all sit under the pear tree at the bottom of the garden, or in the courtyard under the umbrella of what must be a hundred year old wisteria, whiling away the time eating and chatting and being entertained by the grand children’s antics, which always seem to be extra spirited at Christmas time!” said Maggie. It was Maggie Beer and her cook and chef contemporaries who helped to educate and inform the Australian palate and develop what is today a thriving international food industry. She gently encouraged women in this country to break away from what they already knew and to experiment and expand their ideas and shopping lists, often quite outside their comfort zone. She was one of the cooks and chefs who made the modern food world and today is still inspiring those imagining and inventing its future. In the process she became a cuisine muse par excellence to many.

Maggie has generously supplied a favourite recipe for Christmas for our readers so that they can enjoy cooking over the holidays something truly delicious for those they love and who cherish true Aussie ‘foodie’ style.

Fresh quality produce is the key to successful cuisine for Maggie and in her hands something as traditional as Fruit Mince Tarts becomes extraordinary. Best of all you don’t really have to wait for an Australian Xmas to make them. How delicious they are when partaken nearby a log fire with a glass of the necessary during winter as well. In fact you can indulge and enjoy having these in any season. Thank you Maggie. Maggie Beer and her husband Colin have both been enjoying the fruits of their labours in the beautiful Barossa Valley of South Australia where they first began farming pheasants near Nuriootpa in 1973. It is in a place that for many may seem more like a romantic rural idyll.

They were an integral part of the whole new and exciting food revolution that gained momentum during the 70’s in Australia, one that would change forever the way every Australian would approach the preparation and consumption of food in the future.

Colin won a Churchill Scholarship to study game bird breeding in America and following their return to South Australia they both opened a shop on their farm to sell their plump precious birds.

This is where and when I first encountered Maggie Beer and enjoyed her fabulous produce, which for Maggie has always been about flavour. Her fabulous ‘Pheasant Farm Pate was taking Australia by storm at the time. If that was not enough then she opened her amazing Pheasant Farm Restaurant in the late 70’s, where she also served their great game at table in true foodie style.

Prior to Maggie Beer game was not something that many Australians, born on the sheep’s back for over two hundred years had ever really encountered, unless they were overseas and that was a minority.

Those who descended from a United Kingdom heritage had long been wedded to a tradition of everyday English cuisine, which had been passed down from generation to generation. However in some cases its essence had got entirely lost in translation and was now bordering on mediocrity. The Pheasant Farm’s fine Restaurant was one of the most joyous places I ever went in passionate pursuit of culinary delights over my lifetime. Visiting Adelaide on business from the 70’s until 1993 I always planned an overnight stay in the Barossa Valley so that I was able to enjoy Maggie Beer’s dining experience to die for.

Friends from Adelaide always came too and we all had a terrible urge to lick the plate, which was not really a well-mannered thing to think of or do, but an overpowering impulse nevertheless that we always had to repress. The Pheasant Farm was Restaurant of the Year in Australia on many occasions. When my girlfriend and I found out that Maggie was closing it down we wanted to experience this amazing cook’s cuisine one last time.

So I flew to Adelaide from Sydney and we made it a special occasion. We drove up the valley for lunch to celebrate my friend’s 50th birthday, wishing all the while we could extend our afternoon forever into infinity.

This memorable event brought our association with this fabulous Maggie Beer initiative to a sensational close, although we were not on reflection sad, because we knew by now having met Maggie a few times that there would be much more to come.

Fortunately Maggie did not go far, but moved on and into imagining all sorts of other fabulous food innovations, keeping all her contemporaries, including us on our toes.

She was always inspiring and motivational as she moved from breeding to cooking to growing and then from to writing and to talking about food. Her television show The Cook and the Chef with the Hilton Adelaide’s executive chef Simon Bryant while continuing the Maggie Beer creation story allow people from all walks of life and all backgrounds to plug into her and his culinary reputation for excellence in all things and its no surprise that it was a huge success.

Their relationship on screen was happy and glorious and a whole new generation was once again inspired to ensure that the meals they produced were full of fresh produce and infused with love. Long we hoped, that they would reign over us.

But like all good things, it came to an end and we all moved on, which is what you do when you embrace change, something that Maggie is very good at.

“Seasonality and spontaneity in creating short-run products is also what I love best,” Maggie said in an interview with the Australian in August this year, as she continues on with her quest.

In 2012 Maggie Beer has been busy revamping her original Farm Shop, where those who follow the narrow winding dirt road, which is luxuriously lined with apple and olive trees, will be rewarded many times over. She also has more exciting innovations to follow in 2013, which I will report on again soon. I can feel an autumnal road trip from Melbourne to Adelaide coming on already. Aficionados of both her food and style can encounter Maggie Beer Online and join her wonderful ‘Food Club’ for FREE.

There they can gain access to all her produce pronto, a marvellous myriad of recipes, helpful hints, terrific tips and anecdotes, as well as follow her wonderful social and cultural food odyssey as it continues.

It has indeed been rewarding eating out in so many great restaurants around the world, as well as here in Australia for nearly four decades now. It has been a journey full of ‘Culinary Delights’.

The food industry has certainly come a long way from my first experience of ‘posh’ food in the Coogee Beach Oceanic Hotel’s ‘Back of the Moon Room’. I remember it as if it was yesterday, Chicken Maryland – a roast chicken leg topped with a tinned Golden Circle pineapple ring.

I can hear Maggie laughing now, but it’s true and we all took it so seriously.

From a tiny trattoria at Florence to a chic Parisian or Viennese café or the elegance of dining rooms in restaurants and hotels all around the world, including here in Australia, the choice and diversity of both décor and cooking styles that has grown up during Maggie’s lifetime in Australia has indeed been nothing short of amazing. 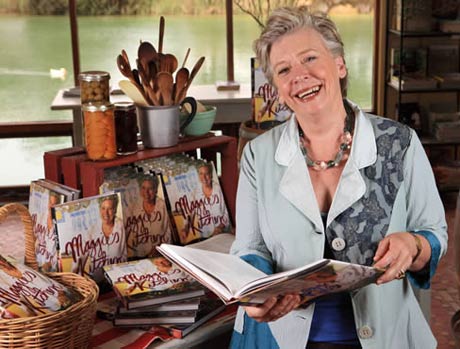 Maggie still has her old fashioned orchard and it supplies the fruit for the truly scrumptious jams, pastes, chutneys and sauces she manufactures, which are just right for fluffy scones at high tea. The varieties are all mouth watering and the apple range alone sports names like granny smith, pink lady, golden and red delicious, Bonza, Fuji, Cleopatra, Sundowner, Jonathan and Lady Williams. While the pears – Duchess, Packham, lemon bergamot, Josephine and Corella provide an extra touch of magic.

Maggie had produced eight successful cookbooks, her Lantern Cookery Classics: Maggie Beer is always at my fingertips along with Maggie’s Verjuice Cookbook. Then there is Maggie’s Kitchen, Maggie’s Harvest, Maggie’s Table, and Cooking with Verjuice, Maggie’s Orchard and Maggie’s Farm.

She is also co-author of the bestselling Stephanie Alexander & Maggie Beer’s Tuscan Cookbook. 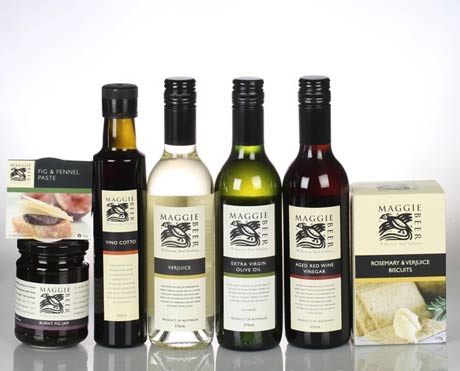 In 2012 Maggie Beer was appointed a Member of the Order of Australia ‘for service to the tourism and hospitality industries as a cook, restaurateur and author, and to the promotion of Australian produce and cuisine’.

As well as writing books, Maggie today devotes a great deal of her time to her fabulous export kitchen in the Barossa Valley, which produces a wide range of pantry items for domestic and international markets.

These include her now world famous Pheasant pate, her simply sensational Verjuice, a splendid range of fruit pastes that make cheese plates zing, as well as her fabulous melt-in-your mouth ice-cream range my two favourites being Vanilla bean and Elderflower and Burnt Fig, Honeycomb and Caramel. Maggie Beer has gone from farm to fame, expanding both her sales and her career through her intuition, her unique understanding of what her core customers want and all the while managing the considerable risks involved and adding value to her business.

She has been busy promoting the quality of Australian food produce at home and abroad and all with a wide smile on her face. For over four decades and for all four seasons Maggie’s energy and enthusiasm for what she does has not abated.

Wonderfully she is still busy inspiring cooks 8 – 80. Needless to say we all know it has in reality been all about very hard work and is about having the courage of your convictions, a passion for Australia, its climate, people and food, as well as an ongoing commitment to excellence.

Keep it going girl, you have many admirers out there who wish you continuing success. What a great role model you are for Aussie Foodie style. Go well Collecting ‘snippets’ of info about our social and cultural development, I came across this in an old file today, having saved it to laugh aloud again – Enjoy!