Once upon a time there were four children whose names were Peter, Susan, Edmund and Lucy Pensivie. They walked through a hidden door in a wardrobe and into a magical place called Narnia where they had many adventures with a lion and a witch before they went back through the wardrobe door and found themselves at home. It all seemed to take no time at all and they were left longing for the days when they were Kings and Queens ruling in Narnia.

The Summer Show at the Bodleian Libraries, running from May to October 2013,  is a fantastical and fabulous display of Magical Books: from the Middle Ages to Middle Earth plus relative paraphernalia.

Open now, the show features the works of celebrated authors all of whom were noted Oxford University graduates C.S. Lewis, J.R.R. Tolkien, Susan Cooper, Alan Garner and Philip Pullman, informal members of the so-called Oxford School of writers. This exhibition also celebrates the authors’ links with Oxford and with the historic Bodleian Library in particular. C.S. Lewis’s Chronicles of Narnia is one of the great classics of children’s literature and perhaps his best loved set of stories. A product of the 1950’s, the decade following World War II, today in many ways they would be considered politically incorrect.

In his On Stories: And Other Essays on Literature published in 1982 Lewis explained how they all began with a picture and gained momentum as the lion Aslan arrived. ‘At first I had very little idea how the story would go. But then suddenly Aslan came bounding into it. I think I had been having a good many dreams of lions about that time. Apart from that, I don’t know where the Lion came from or why he came. But once he was there, he pulled the whole story together, and soon he pulled the six other Narnian stories in after him’.

On display will be C.S. Lewis’s map of the land of Narnia, the enchanted land where animals talk and mythical creatures and beasts abound. It is a place where strange inexplicable things can and do happen to the earth children who go adventuring there. The Chronicles of Narnia are not always comforting and consoling, reflecting many of the ways human beings can become enmeshed in a prison of their own making. They cleverly provided a magical way in which we can examine our own humanity.

They are all about exploring an alternative world, incorporating a deeply felt defense of the Christian faith even if at times it seems ambiguous. As Lewis himself stated they were meant to be ‘a mouthwash to the imagination'; all about having a fresh approach to life.

Narnia is a world in which Christian language is absent, but one where children are gradually introduced into a world where they might be able to believe there may be a higher power looking out for us all, within a framework of reality.

The so-called ‘Lefay notebook’ on show is all about an unfinished prequel to The Lion, The Witch and the Wardrobe. 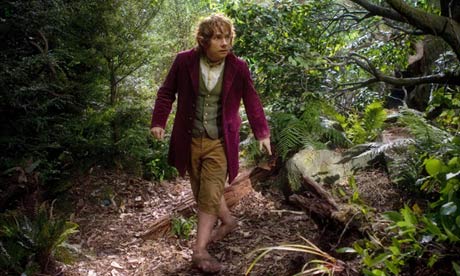 After discussing his ideas with his publisher Lewis eventually decided to dismiss his notations as ‘too dark’ and wrote the more upbeat sequel about the dashing Prince Caspian instead.

The Legacy of this unfinished fragment remains as found by his secretary, Walter Hooper after he had died, and it was ultimately widely published in his work “Past Watchful Dragons” in 1979.

The show also includes a selection of J.R.R. Tolkien’s original artwork for The Hobbit and The Lord of the Rings and we all know what an extraordinary success they have been as a movie series made by Peter Jackson in New Zealand. Tolkien’s world, like Lewis’s Narnia world, was a wonderful fantasy and its not surprising to discover that they were friends at a rich literary period of their lives, sharing ideas in a literary discussion group known as the Inklings.

While many had published stories in the fantasy genre before him, Tolkien’s works The Hobbit (1937) and The Lord of the Rings (1954-55) kick started a whole new fascination with the subject.

These successful novels included philology, mythology, religion, the author’s distaste for the effects of industrialization and his life experiences, especially WWII.

On public display for the first time will be the original manuscript of ‘The Fall of Arthur’, a previously unknown work by Tolkien. The poem was one of several projects left uncompleted at the time of the author’s death and has been published in line with this exhibition.

Albion’s historical once and future King Arthur by the Middle Ages in England had acquired legendary status. He was immortalized in Sir Thomas Malory’s Le Morte d’Arthur first printed in 1485 with the last printing for nearly 200 years occurring in 1634. Malory based his book, which was originally titled The Whole Book of King Arthur and of His Noble Knights of the Round Table on various previous romance versions.

His tales of the magical kingdom of Camelot, the knights of the round table, the wizard Merlin and the adulterous love affair between the dashing Sir Lancelot and Lady Guinevere have inspired centuries of writers ever since.

Art and life in the age of chivalry and romance was all about lords and ladies, knights seducing or rescuing fair maidens, knights on holy crusade and courtly love.

There were merry monks and monarchs, marvelous banquets, troubadours roving about the countryside singing songs, tons of people dashing about on passionate pursuits, not to mention merchants making money, family feuds and handsome youths languishing about in gardens of love. Illustrator Arthur Rackham’s images of ‘How Mordred was slain by Arthur and how by him Arthur was hurt to the death’ are also on display. They were made at the height of World War 1 and evoke the dreadful landscape of the trenches and unchivalric realities of war in contemporary times.

They are very dark indeed.

The manuscripts of novels and poems by Alan Garner (b1934), Philip Pullman and Susan Cooper will also be exhibited here for the first time.

Alan Garner’s most notable works include The Wierdstone of Brisingamen, The Moon of Gomraath, Elidor and The Owl Service.

Garner draws on transcriptions from that early novel in his The Wierdstone of Brisingamen (1960).

Alan Garner’s Carnegie medal-winning The Owl Service (1967) reimagines the Welsh legend of the flower maiden Blodeuedd and the original story tells how a wizard conjures a woman made out of blossom to be the wife of Lleu Llaw Gyffes.

Being turned into an owl when she takes a lover, who is magically killed by her husband, is her punishment.

The Owl Service was immortalized on a ceramic dinner service designed by none other than renowned designer Christopher Dresser, who worked for several English pottery firms between 1862 and 1904. 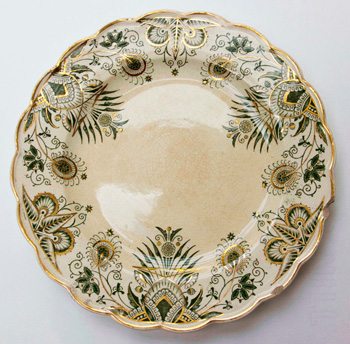 In the book it’s said that ‘if you take the design off the plate and fit it together it makes a complete owl’.

Phillip Pullman says he is in the ‘once upon a time’ business’.

Some of his novels have already made it into film including Northern Lights, renamed The Golden Compass at the  movies, which came from His Dark Materials series.

Susan Cooper (b1935) is best known for The Dark Is Rising a contemporary fantasy series, which incorporates British mythology especially the Arthurian legends and Welsh folk heroes.

The Bodleian Library’s collections include some of the books and manuscripts that contain the myths, legends and magical practices on which these authors freely drew inspiration.

This historic material is all housed in the Bodleian, which as a source of sorcery and arcane learning can be re-imagined as an enchanted location in itself.

The medieval Duke Humfrey’s Library is the reading room in which both Lewis and Tolkien as Oxford dons researched manuscripts and rare books, and where Alan Garner first consulted the demonic spell books in the Ashmole and Rawlinson collections.

The First Folio edition of William Shakespeare’s Macbeth, and the extraordinary ‘Ripley Rolls’, which illustrates the quest for the life-prolonging philosophers’ stone, represents witches and alchemists in the exhibition. Grimoires and richly-illuminated mediaeval bestiaries will also be on display, as will a variety of magical objects, including a 17th-century marble copy of the ‘Holy Table’ which John Dee used to converse with angels. Then there is Philip Pullman’s alethiometer, a unicorn named Findhorn and one of Alan Garner’s original ‘owl service’ plates.

The exhibition was co-curated by Sarah Wheale, Acting Head of Rare Books, and Dr. Judith Priestman, Curator of Literary Manuscripts.

They said: ‘this exhibition is a fabulous opportunity for people to come and see a great range of the Bodleian’s treasures from the past nine hundred years. It’s been a real privilege for us as curators to work with Philip Pullman, Alan Garner and Susan Cooper. ’ A rare first edition of Harry Potter and the Philosopher’s Stone was a STOP PRESS late addition to the Bodleian’s exhibition, although it was only on display in the Bodleian exhibition room until 10 June.

The volume, which included annotations and drawings by author J.K. Rowling, was sold at a Sotheby’s auction for the record price of £150,000 on Tuesday, 21 May in aid of English PEN International and J.K. Rowling’s own charity Lumos.  Due to the great generosity of the new owner who was also a friend of the Bodleian, the volume made it from the saleroom to the Bodleian exhibition room in less than 24 hours, just in time for the public opening.

It complemented perfectly a stellar line-up of illustrious authors of children’s fantasy literature featured in the exhibition. Rowling’s personal annotations cover forty-three pages and include references to the Harry Potter series as a whole and also the film adaptations. In the Bodleian exhibition, the book is open at the title page where J.K. Rowling noted below the title that this book ‘changed my life forever’.

This rare edition of Harry Potter and the Philosopher’s Stone sat alongside a selection of Tolkien’s original artwork for The Hobbit and The Lord of the Rings, and his manuscript of a previously unknown poem, ‘The Fall of Arthur’; C.S. Lewis’s ‘Lefay notebook’ and his map of Narnia, and manuscripts of novels and poems by Alan Garner, Philip Pullman and Susan Cooper, many of which are exhibited here for the first time.

‘An exhibition on children’s fantasy literature could not have been complete without Harry Potter, the series which has captivated the imagination of the latest generation of children.  The Bodleian Libraries are extremely grateful to the new owner of this rare first edition of Harry Potter and the Philosopher’s Stone for the opportunity to display the book for the first time for thousands of visitors to view for even a couple of weeks. ’

An illustrated book accompanies the exhibition: Magical Tales: Myth, Legend and Enchantment in Children’s Books, edited by Carolyne Larrington and Diane Purkiss (Bodleian Publications, 2013) is also on sale. You can purchase it at www.bookoffers.com.au

J.R.R. Tolkien’s The Fall of Arthur is also available, follow our link for both paperback and de-luxe edition http://wp.me/plN7Q-8Zc

Magical Books: From the Middle Ages to Middle-Earth

A program of lunchtime lectures will support the exhibition.

The Bodleian Libraries at Oxford in England will mark this year’s World Book Day on the 1st March with a series of events dedicated to legendary British writer Jane Austen.