Magnificent Trees, like those of The New York Botanical Garden over the centuries all over our world have supplied an abundance of beauty, refuge, warmth, shelter and food for all the creatures of nature, including humans.

They have shed their bark and leaves for compost and to help make other things grow around them. They have helped to clean the air and cool temperatures, played a vital role in the evolution of our planet and the early frontiers of human life on all our continents, as well as the many diverse societies and cultures that have inhabited them from way back in the mists of time right through to the present day.

As they have transformed with each passing season so has the world around them, and the people in it. Trees like to have kids climb on them, but trees are much bigger than we are and much more forgiving*

Reluctantly the magnificent trees gave up their wood for making bows and arrows and gun barrels in times of war, civil or otherwise. Then, following our darkest hours and when the light of reason finally dawned once more, they provided materials that have helped to build up humanity and its society all over again. 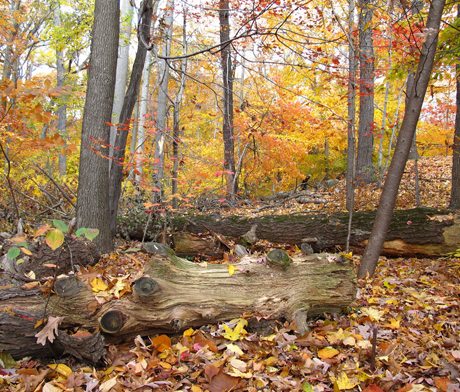 The New York Botanical Garden (NYBG) was founded in 1891, reportedly inspired by the description of Elizabeth Gertrude Knight Britton, and her husband, Nathaniel Lord Britton, both academics and botanists, of a recent visit to the Royal Botanic Gardens at Kew, England.

The area chosen was situated within the already designated Bronx Park and was to “retain as much as possible the natural scenery of the place”, which it was reported, “… in beauty far exceeds that of any existing botanic garden”. It opened with Nathaniel, Lord Britton as its first director.

Calvert Vaux and Samuel Parsons, Jr. created the initial design, developing a pattern of curvilinear drives that highlighted the Bronx River and hemlock forest on the site.

The Bronx River was an important aspect of the site, where the aim was to establish and maintain the first American museum devoted solely to botany that was ultimately….‘for the entertainment, recreation and instruction of the people’.

The only fresh water available to early New Yorkers, like other rivers of the world it has suffered from being a refuse for society. It is today receiving rejuvenation so that it can continue to offer society refreshment.

Today The New York Botanical Garden complex serves as a vital education centre for Americans and tourists to that amazing city, as well as a vital research facility where continual monitoring of the changes of climate on its fragile ecological system is being carried out. It is recognized throughout the world for its considered stewardship and connoisseurship.

The garden has a wealth of native and exotic trees in its grounds, representing many lands and cultures. The stewardship of the gardens is indeed impressive as are its magnificent trees, which benefit the New York environment in many ways. 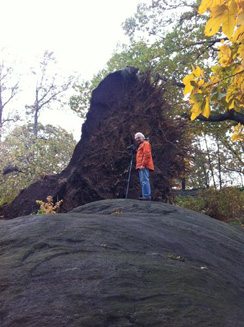 Maintaining them means integrating greener gardening techniques, including adopting best practices for horticultural care and using low and no-emission vehicles, which assist and help to keep the garden healthy and its 50-acre native forest beautiful.

In October 2012 the NYBG celebrated its collection of marvelous trees with a landmark publication, Magnificent Trees with lavish photographs by Larry Lederman, who brilliantly captured their grandeur. He highlighted some 30,000 specimens that adorned the landscape of the garden and what is for Americans, a national historical, and important landmark.

When Superstorm Hurricane Sandy struck New York in late October 2012, just after the launch of this book, nearly 500 of the Garden’s trees were either uprooted or otherwise destroyed. 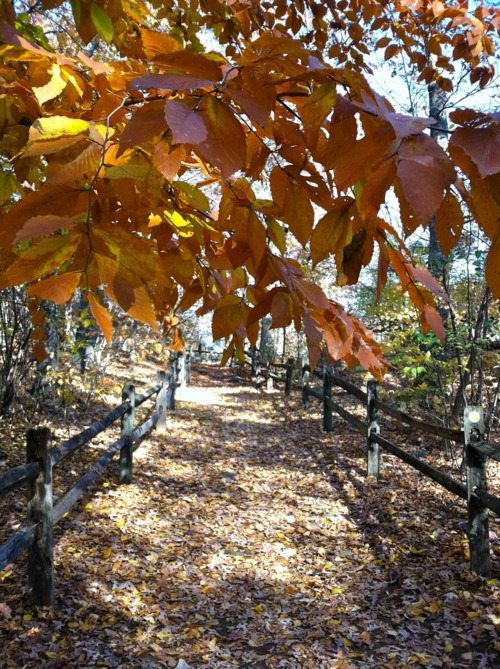 The book will now always remain as a great record and homage to those ‘Magnificent Trees‘ that were felled, which had been there since the Civil War.

As the author toured the native Thain Family Forest in early November to see the damage himself, he noted, “to see this beautiful majestic thing that was leveled by some force is just beyond your imagination. It makes us understand the power of nature”.

Larry Lederman said. “The force of the wind yanked them out of the ground. You see this tree that’s 100 feet high and 80 to 90 feet wide and you see it ripped out”

The text of the book details the histories of the trees ‘from their vital role in Native American life and culture, to their wartime function as neutral territory during the Revolutionary War.’ The magnificent trees featured were disposed in forests, in groves or left standing in solitary majesty within The New York Botanical Garden’s grounds, where with the changing of the seasons at both sunrise and sunset, the light interplays with their branches and leaves to produce shadows that reflect the passage of history in what is a truly wondrous place. They bent low in the prevailing winds and arched their branches high like great Gothic cathedrals, reaching for the heavens. Their bare branches bore the weight of the snow on a chilly winter day, or an abundance of the fresh new leaves arriving each Spring to provide shade during summer for people, flora and fauna.

Designated a New York City landmark in 2009, the always-stunning Tulip Tree Allée in The New York Botanical Garden invites people to visit the historic and grand neo-Renaissance style museum building originally constructed in 1898 – 1901 in a style reminiscent of Beaux-Arts civic buildings of the turn of the century. The Great Museum Building now contains the Mertz Library, arguably the most important horticultural and botanical library in the world

The Allée was damaged by the Hurricane as some trees came down, while the building survived.

Designed by Robert Williams Gibson its rusticated and pedimented central pavilion, monumental columns and copper-clad dome are distinctive characteristics, as is the classically inspired ornament on its façade.

The tulip trees were planted between 1903 and 1906 amid poplars. However by 1911 the poplars had been removed leaving only the tulip trees, which today form a spectacular and complex geometry of barren branched beauty during winter when their foliage falls away.

Although altered since, this wonderful building, the historic Fountain of Life (1905) and what remains of the Tulip Tree Allée also damaged in the storm of 2012, today form an impressive civic space, which celebrates the visual and natural arts in all their glory.

The Fountain of Life was designed by Charles E. Tefft for Robert Gibson’s marble plinth and basins, which feature a cupid astride a dolphin, which surmount a globe of the world and two plunging horses being restrained by a girl and boy. Restored in 2005, the Allee consists of trees lining both sides of the drive leading up to the fountain. From marvelous Maples to sturdy Oaks, the ethereal beauty of Beeches as well as the magnificent display each March made by its many varieties of scented Magnolias, whose flowers adorn and are arrayed in spectacular style on bare branches, the magnificent tree collection, within The New York Botanical Garden complex provides an outstanding example of the world of nature’s biodiversity.

In the gardens there are also unexpected surprises, such as the cutleaf staghorn sumac, whose fuzzy red fruit is set against a backdrop of slender orange leaves.

You’ll see everything that’s glorious about the fall in America in one place in The New York Botanical Garden, where you can entirely immerse yourself in all the spectacular colors and flowers of the season, especially each autumn when the colours of nature feature in such spectacular style. 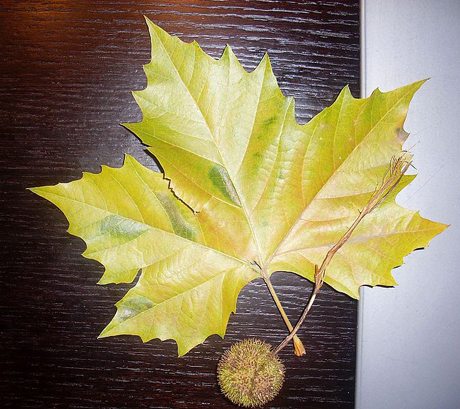 The largest tree in the gardens is a Platanus x acerifolia, more commonly known today as the London Plane.

It was born, as legend would have it, when an Oriental Plane and American Plane stood in proximity to each other in the landscape of seventeenth century England.

Tolerant of atmospheric pollution and root compaction, this popular urban tree all around the world has branches that meet across many a road to form sensational tunnels and canopies of green. Its seeds are a food source for birds and squirrels, and it also suits the technique of pollarding, creating a distinctive shape and style enhancing city life.

Douglas-firs are a conifer native to western North America and they were planted near the southern border of The New York Botanical Garden in 1919 as a tribute to the American soldiers lost in World War I. These tall towering columns of green carry distinctive cones.

This fabulous fir was named for David Douglas, the Scottish botanist who first introduced the species into cultivation at Scone Palace in Scotland in 1827. As well he introduced many other North American native conifers into Europe.

The New York Botanical Garden also contains the largest remnant of the original forest that once covered most of New York City area, whose preservation is sponsored, providing an excellent example for others to follow in the magnificent tradition of American philanthropy, which is all about giving beyond self. As a remnant of the old-growth woodlands, the forest has suffered from the changes humans have made over the past centuries. The Forest Management plan is about taking action to further enhance its role in the future with invasive species being eradicated, a worthwhile project that volunteers help with.

As magnificent trees in nature do the trees in the forest have adapted to changes in climate.

The seasons, man-made pollution and the violent forces of nature continually shape their evolution.

They have also responded to invasive species, pests and diseases, which has impacted on their performance as they either thrive, or struggle for survival.

Consequently the Thain Family Forest is a living laboratory and The New York Botanical Garden and its sponsors, supporters and volunteers are devoting both manpower and money to monitor the forest constantly so that it will still be available to future generations.

Visiting researchers in many aspects of botanical education apply to study in the garden. They bring primary and high school students to this very special place, where investigating plants and plant parts help them to develop an understanding and appreciation of nature.

It also helps pre-schoolers with the development of their literacy.

University students carry out vital research as part of their degree process. Increasing public awareness of the facts about the impact of climate change is a priority.

Stunning exhibitions and a whole range of informative and exciting events are planned and held throughout the year. They provide everyone with inspiration so that they can also enjoy the countless joys attached to gardening whether they live an apartment, on a terrace, in a backyard or on acreage. Volunteers are always needed for such valuable work and as a bonus, they gain intimate knowledge of the forest and magnificent trees of its landscape.

Wise people plant trees knowing that they won’t have an opportunity to sit in their shade is an apt comment, for it takes wisdom and vision to preserve, conserve and protect the natural resources of our planet into the future. 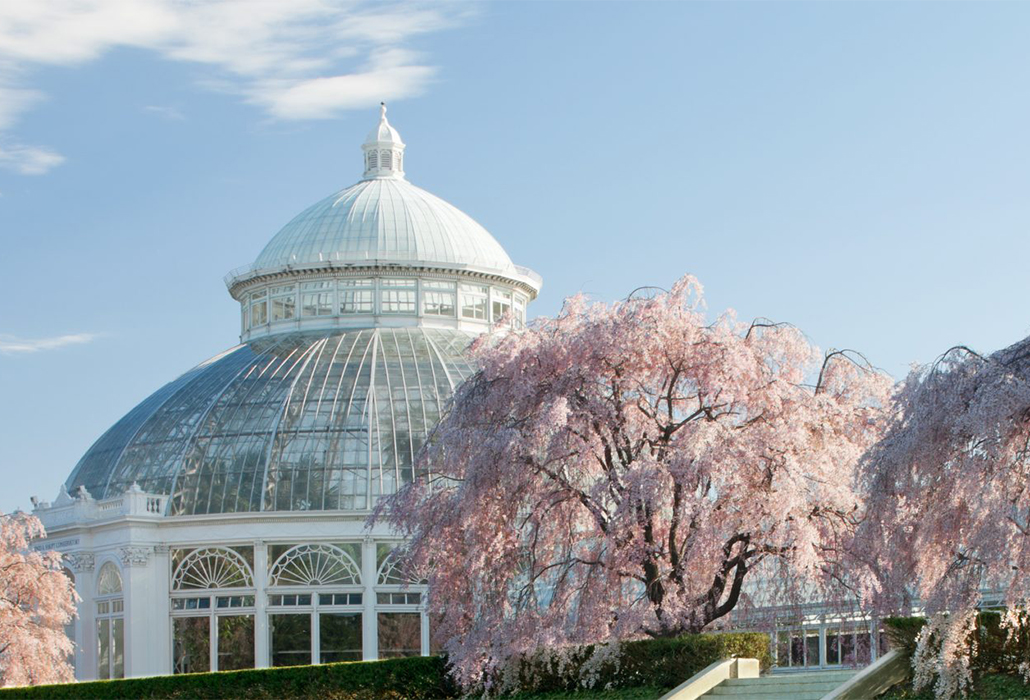 The New York Botanical Garden is in every sense a microcosm of the macrocosm, a small complete expression of the vastness of nature. Today it is providing a wonderful role model for us all to follow. 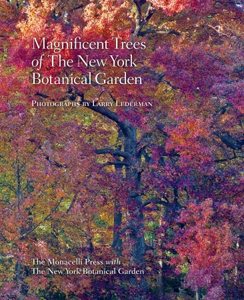