Mallett, of London and New York, one of the world’s leading dealers in antiques and art started 2016, their 151st year in business, with an exhibition at their New York gallery of fine English furniture, clocks and decorations from some of the leading cabinet and clockmakers of the eighteenth century.

Ranging across many styles from the curves inspired by the frivolous French Rococo style to the clean refined lines of English neoclassicism, a balanced combination of the useful and the beautiful* were gleaned from American private collections for the show. All the works on show were very fine.

The splendid victories of John Churchill at Blenheim in Bavaria in 1704 ushered in peace and stability to England, as well as parts of Europe. This allowed economies to become buoyant and massive growth to occur, a state of affairs that lasted for nearly one hundred years.

The political party known as the Whigs came to power placing Hanoverian George 1 on the throne in 1714.

The new rulers represented the traditional landed class, who were wealthy, educated, anti-Catholic, and very suspicious of both Stuarts and foreigners. 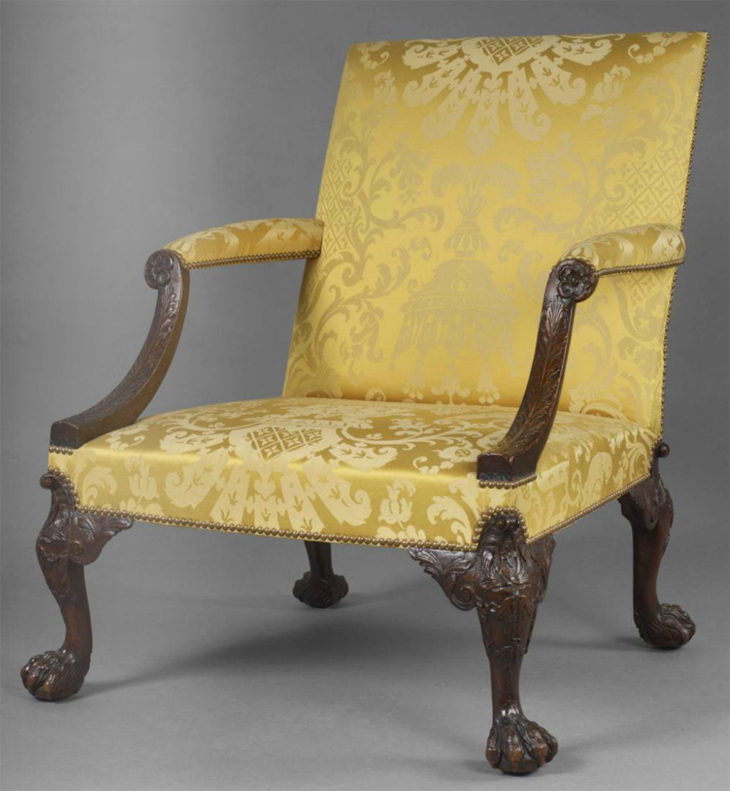 Walnut was the wood of favour at the time, and a walnut library armchair raised on cabriole legs, has been attributed to the workshop of Giles Grendey (1693-1780) who mainly specialised in red lacquer, walnut and mahogany.

He labelled some of his products, between 1735-55 and his seat furniture was sometimes stamped with varying initials, often likely to be those of chair makers employed by Grendey. This one is monogrammed J.B.W.

Existing evidence reveals that Grendey was an immigrant to London from the provinces, who saw the opening for making middle-class goods for the home market, and specialised goods for export.

He was also active as a timber merchant. During the late 1720’s, due to the lifting of import duties

Mahogany timber became available in significant quantity in log and plank form and between 1725 and 30, it began to take precedence over the use of walnut.

This enlarged the repertoire of designs. With the population increasing and trade expanding, the greater demand meant greater output. It was not long before cabinetmakers and carvers alike recognised, and took advantage of mahogany’s many qualities, which meant that carving could become finer with a new vigour and crispness.

Only in England and later in America at this time emerged the smallish self contained and especially designed family house in the country, one that suited the landed gentry who increased in numbers.

Leading architects gradually refined designs inspired by the architectural remains from antiquity at ancient Greece and Rome, to better suit the scale and layout of domestic housing.

In England power now had a broader base. Landownership formed a pyramid spreading out from the aristocracy down to the smallest yeoman farmer, forming roughly three categories; the peers, the gentry and the freeholders.

It was also possible with some difficulty and the aid of burning ambition to break in on these established circles. Royal favour was no longer a guaranteed way of obtaining land and wealth as it had been in the past. The route to the top now also lay in outstanding success in a military career, the law or trade. The French Rococo style popular for interiors up to mid-century looked to nature for its inspiration.

Mainly confined to bedchambers, closets and secondary rooms in England, the aquatic and naturalistic were well suited to three-dimensional stuccowork.

Rococo as decoration was not as successful in England as in France, its frivolous nature not considered acceptable in some circles.

Painter and social commentator of the time William Hogarth (1697-1764) remarked ‘it leads the eye on a wanton kind of chase.’

By the end of the 1740’s, the furniture trade in England had entered a period of almost unparalleled productivity.

The climate of taste provided ideal conditions for fine craftsmanship and design to flourish.

The system of patronage set high standards of design and execution. The very best furniture was expensive and created for a privileged elite.

The centre of the less rigidly controlled furniture trade was London, more particularly St Martin’s Lane the location of the St Martin’s Lane Academy, which had been founded by Hogarth in 1735.

With a concentration of artists, craftsmen, architects and tradesmen working in the same area, there was ample opportunity for exchange of views, ideas and skills.

A pair of mid eighteenth century giltwood mirror-girandoles attributed to William France and John Bradburn were commissioned for Sir Lawrence Dundas. Their style reflects the Rococo’s love of assymmetry and some of its characteristics such as C and S scrolls as well. His town house at 19 Arlington Street, Mayfair was newly decorated by the Scottish born London based architect Robert Adam (1728 – 1792).

It featured a “Turkey” carpet (with typical red/blue decoration), fashionable blue wallpaper, with a golden fillet above the dado; simple horsehair covered Gainsborough chairs arranged against the walls; the table brought forward because it is in use.

There was a chocolate brown skirting, providing an anchor to the base of the walls, and the blue damask curtains hung in the new “French” (side drawn) style.

The pictures were arranged in a slightly crowded fashion, but complemented the rest of the decoration, note the two paintings hung low over the chair rail.

The chimneypiece was superbly decorated with neo-classical motifs, and the broad mantel displays a wonderful collection of bronzes and Yorkshire born London based cabinetmaker Thomas Chippendale (b.1718-1779), who made four sofas and eight chairs to an Adam design for Sir Lawrence Dundas.

As the century progressed classical concerns were reflected in interiors and furniture and when combined with economic expansion and widening trade relations this in turn affected the types of materials chosen and design. The Mallet show also featured a pair of giltwood pier tables in the manner of Thomas Chippendale made for  the 10th Earl of Pembroke for Pembroke House.

At London by the 1760’s long straight streets and beautiful squares appeared where the ground on either side was not paved with gold as some believed, but with flat stones so you would walk without danger of being knocked down by coaches and horses.

Those in the upper echelons were proponents of a scandalous new dance called the waltz, as well as proud owners of a flushing water closet. They belonged to clubs and poetry circles and discovered the benefits of bathing regularly. They established their partnership in 1758, publishing their pattern books “The Universal System of Household Furniture” 1759 and “Household furniture in the Genteel Taste” 1760 .

Probably the longest lived and least well-documented workshop in the eighteenth century, much of the firm’s most expensive cabinetwork was enriched with ormolu mounts and probably came from the local firm of Boulton and Fothergill in England although some may have been imported.

The source of inspiration for the English neoclassical style was that period during the Italian Renaissance when Venetian Architect Andrea Palladio (1508-80) was designing a series of pleasure and agricultural villas for private clients in the Veneto. There was need for a style that encompassed the principles of order and harmony as espoused by 1st century Roman architect Marcus Pollio Vitruvius with a combination of elegance and a lightness of touch meant that the end result a style that was aesthetically very pleasing.

The English neoclassical style became highly influential in America, particularly through the support it received from American President Thomas Jefferson, who pursued his passion for knowledge of the design style that went on to reign supreme, at least until the advent of Frank Lloyd Wright and the arrival of Modernism in the late 19th century.

The newly-formed AWO Chamber 8 ensemble presented a captivating program of beautiful music in the Melbourne Recital Centre, engaging our head our heart and soul