Bathurst Regional Art Gallery has a strong history of celebrating the artists and cultural heritage of its district and in 2016 the Gallery presented Mandy Martin: Homeground, a touring exhibition curated by Sarah Gurich.

The exhibition then travelled to Penrith Regional Gallery & The Lewers Bequest. This beautiful heritage setting on the Nepean River at the foot of the Blue Mountains at Emu Plains attracts countless visitors. After much lobbying and negotiating it was established in 1981 at the former home and property of sculptor Gerald Lewers and his painter wife Margo Lewers.

I was fortunate to view the exhibition at this visual arts centre of excellence, where there was much to discover. Mandy Martin in the Studio

Mandy Martin is one of Australia’s leading artists and her reputation is international. She has had exhibitions across the world including France, Germany, Japan, Taiwan and Italy. Her works are in many public and private collections throughout the world. She is represented in the Guggenheim Museum, New York, the Nevada Museum of Art, Reno, the National Gallery of Australia, most Australian state galleries and many regional galleries.

It was at Cowra Regional Art Gallery many years ago that I first encountered Mandy Martin’s remarkable, discerning and deeply powerful artworks.

Mandy Martin has lived in Mandurma in Central Western New South Wales for twenty years and twenty artworks representing her practice during this time were selected for the survey exhibition. Mandy Martin’s profound artwork transcends the physical and resonates with the terrifying dichotomy of industrial development in particular mining and its effects on the environment. She crosses the threshold of acute observation and pushes the boundaries of serious environmental issues with an astute intelligence and strident confidence.

She documents a foreboding and apocalyptic cry in her classically conceived artworks that bare the hallmarks of the earth’s palette. Her rendering of space and light is masterfully crafted in the mining and quarrying landscapes of this twenty year survey exhibition. Mandy Martin thought she would become a scientist following in her father’s footsteps however, her mother was an artist and perhaps her destiny was cast, consequently there are strong scientific themes in her work.

Her constantly expanding knowledge and understanding of environmental science and its history and that of water is verified in her dramatically enormous landscapes. They evolved from her extensive, intense varied field excursions and impassioned responses to her observations and reflections. The triptych Wallerawang Power Station 2009 Wanders in the Desert of the Real series is unsettling, morally challenging consequences of the eruption of the mineral boom. The putrid air and man’s wayward journey into progress is juxtaposed with destruction.

Coal seams plunge the viewer into the endless abyss of sprouting manipulation of the earth. The plumes of smoke billow the demons of depression. There is no clarity as the textual nuances; layers of pigments and complexity create a visionary pictorial representation of the suffering earth.

The lone solitary figure grapples with mutilation, the moral dilemma of responsibility and the casualty of ignorance.

The study for this larger work is perceptively potent and hauntingly fraught with the changes wrought on the environment.

Haunted 1 is a monumental work that is testament to the unique Australian landscape and Mandy Martin and Trisha Carroll’s unequivocal connection to it.

The five vertical curved lines that meander across the sweeping view of the landscape are the opaque spiritual lines of the land. The ethereal spirits of the land are the lingering custodians.

The two artists have crafted textural surfaces and colours of the earth that express their respect and love of country. The tonal warmth of the endless remote scene creates an expansive landscape saddened by the absence of the Traditional Owners.

The eerie stillness exposes the hallmarks of the past and the grief of the present. I felt this theme is ever present across the whole exhibition.

Also included in the exhibition were more recent examples of Mandy Martin’s collaborative practice this time with her son Alexander Boyes, Canberra based artist and curator. 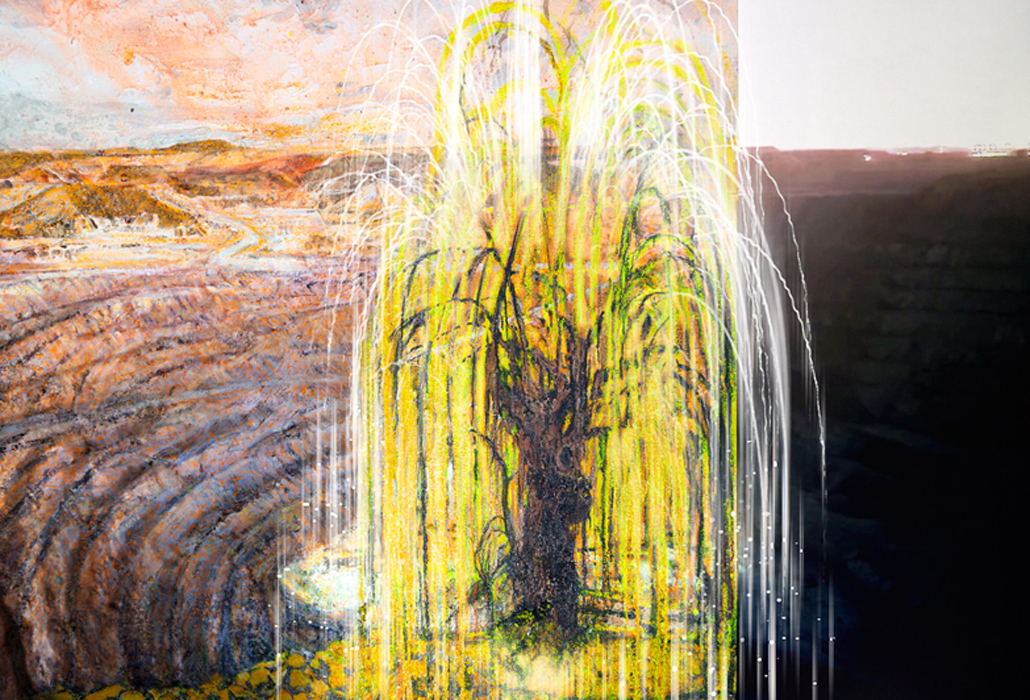 Mandy Martin is always pushing boundaries and she is not afraid to embrace technology. In the mother and son collaboration Willow Yellow 2016 pigments, oils and linen were given the added dimension of a digital progression loop.

This mining landscape conveys the grooves and circular forms of continuous digging. The hues of the stark patterns of excavation change with the digital imaging.

The flat weep of the yellow willow is electrified by the digital light and the continuous activity of the mine site day and night. A never ending cycle of relentless drive is palpable in the moving beams of yellow light. A conveyer belt of monotony and usurping is rhythmically communicated. The willow shimmers with yellow lights that quiver and glow changing the colours of the landscape and the sky. The desolation, isolation and unease of the mining quarrying landscape are intensified in the cyclic motions of day and night, light and shade.

Mandy Martin’s continuing journey between nature and industry is compellingly documented in her art and this exhibition uniquely defines her position in Australian art history.

She judiciously articulates “I feel I have always been painting the same painting” and she has, digging ever deeper into the scarring of the earth.