Ole! In his next flamenco fusion Concert at Brisbane in April 2012 talented musician Gerard Mapstone will perform high energy flamenco guitar with the addition of multi layered sounds and contagious rhythms. These will be produced in collaboration with guest instrumentalists Shenzo Gregorio on the violin and Dheeraj Shrestha on the Tabla, a popular Indian percussion instrument used in the devotional music of the Indian subcontinent. The trio are going on an exciting exploration of exotic and sublime sounds from Nepal, India and Spain, sounds that stir the soul.

Gerard Mapstone is a composer and virtuoso musician, who delivers strength and vitality with each performance. He graduated from the Queensland Conservatorium of Music, awarded the universities prize for guitar. He fell in love with flamenco music and lived at Jerez de la Frontera for a while, to follow his dreams and hone his technique. Jerez is in the province of Cadiz and the community of Andalusia, whose culture has been infused and influenced by the ancient Carthaginians, Greeks, Romans, Visigoths and Byzantines among others. 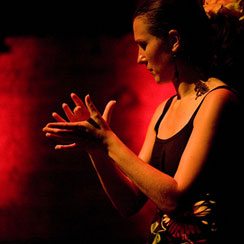 He toured the United Kingdom with flamenco fusion group Candela, developing a fierce following of fans, while based in the seaside town of Brighton. His first album release Vuelta al Mundo for solo guitar laid the way for creative collaborations with the Doch Gypsy Orchestra, James Sherlock, Shenzo Gregorio, Pierre Bensusan, Dheeraj Shrestha, Barry Conyngham, The Queensland Ballet, Siberian Circus, Laique and The Camerata of St John’s (Chamber Orchestra). This has meant he has enjoyed many exciting experiences.

This year with his Australian flamenco group the DALéCAÑA Flamenco Company, he has been playing to sell out concerts. DALeCAÑA (to give it fire) is a fabulous take on the flamenco tradition, with dancers trained in Seville and musicians trained in Jerez. They are all set to release a new album in 2012. 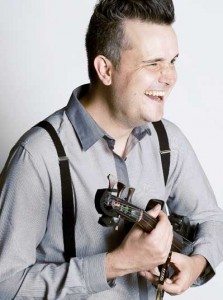 From London to Spain and down under to Australia Gerard, along with Shenzo and Dheeraj, has featured at many top world music festivals, where they have all drawn inspiration from their friends and collaborators to create exhilarating live performances.

Shenzo is renowned for his electrifying performances. From Classical to Jazz and Pop music Shenzo can rove effortlessly through all genres. The death defying performances of his exciting electric stunt orchestra have pulled huge crowds all over the country. His is a talent that is indeed prodigious and completely awesome in its delivery.

From Nepal, Dheeraj Shrestha has been wowing audiences here in Australia for some fifteen years. He tours as a performer both around Australia and extensively overseas. He has developed an innovative style of performance, collaboration and teaching and is the foremost person in the Australian music industry promoting the tabla tradition. He has brought this very special instrument into vogue.

What a trio, what an opportunity that Brisbane people have to enjoy a simply sensational performance experience.