Fashion is knowing what suits you and wearing it well The InForum Group, run by key lifestyle Sydney based professional industry figures Jenny Garber and Fiona Coogan, will present special guest speaker, fashion and travel journalist Marion Hume, as the business community gets back into gear to start the 2012 year. At Sydney over lunch in the elegant Ivy Room on January 31st, and at Melbourne over champagne and canapés at the stylish Mossgreen Gallery on February 1st, Ms Hume will offer InForum Group members and guests an insightful talk about the constantly changing world of fashion. She will share her understanding of how currently the rise of e-commerce is transforming the industry, the retail environment, the future for the fashionista, as well as all our shopping habits.

Since graduating from Exeter University at London Marion Hume, from 1985 – 2012, has been involved in writing, lecturing, consulting, editing, producing and presenting seminal programs about key fashion industry figures, sporting identities and glamorous celebrities. She has a renowned reputation for being a straight shooter, insightful, honest, with great integrity and independence. She is an advocate for many social profit organizations, including co-founding in the UK a social profit organization known as Fashion Acts, which raises awareness and millions of pounds for the fight against Aids. She also consults to The Ethical Fashion Forum, an industry social profit body that helps some of the world’s poorest people. Louboutin lovelies, for stepping out on the red carpet

Judging when to speak or stay silent in her industry must be a fine balancing act. And being honest would have people either mad at you, or marveling at your courage. Knowing how to keep your enemies close, just like Miranda Priestly (Meryl Street) in the now 2006 ‘classic’ The Devil Wears Prada’, would be important. You would also need to keep your stilettos sharp. No doubt wearing shoe designer Christian Louboutin’s fabulous red-soled shoes would prove an advantage, especially if you found yourself stepping through blood on a ‘red’ carpet.

Ms Hume is no stranger to controversy and has interviewed in her professional lifetime many amazing characters. She was reported in The Age in 2005 as saying about the book she had taken time out to write, The Fashion Pack, which was published that same year, that it was all “about friendship in a world of fakes”.

A girl should be two things: classy and fabulous* Harper's Bazaar presents highlights of Australia's sartorial past at the opening night of the 2009 Melbourne Fashion Festival. Photo: Penny Stephens

Born into the world of art, design and style with a father who was a designer and a mother who was an art teacher, Marion Hume is an English literature major, who after going back and forth for years fell so much in love with Australia that she became a citizen in 2002.

She is currently International Editor for The Australian Financial Review and Travel Editor (London) for Harper’s Bazaar, Australia. Ms Hume also writes for The Financial Times, The Daily Telegraph and the Saturday Telegraph Magazine in the UK.

From 1989 – 1992 she was a consultant to the BBC on their landmark six part television series about the world of fashion entitled ‘The Look’, which included documentaries on industry luminaries such as Gianni and Donatella Versace, Giorgio Armani, Ralph Lauren, Donna Karan and Christian Lacroix.

Fashion is not something that exists in dresses only. Fashion is in the sky, in the street, fashion has to do with ideas, the way we live, what is happening*

The InForum Group are about educating, enlightening and expanding the knowledge of women in the workplace. 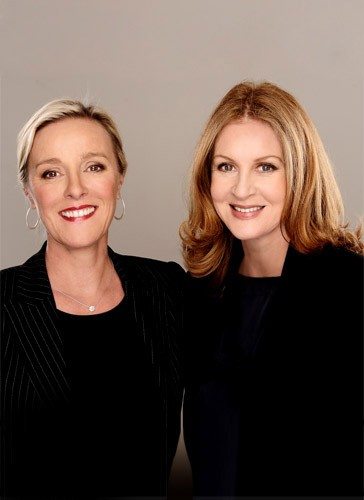 With extensive qualifications, industry knowledge and experiences that are complimentary, Jenny Garber and Fiona Coogan are both very well placed to help their members gain personal and professional satisfaction.  If you would like to become a member consult the InForum website.

Marion Hume has gained a broad range of experiences in the world of fashion and journalism, and as such would have many captivating, and controversial stories to tell. Building a reputation in any field is hard enough, but in the glamorous, and sometimes nail biting and backstabbing world of fashion, it is no mean feat. It takes dedication, commitment, a good work ethic, plain talking, and above all a passion for the industry.

The fashion and arts industry certainly makes or breaks many people, especially those with only a thin veneer to hold back the blows. Fortunately Ms Hume comes from strong stoic Scottish stock. They are made of much sterner stuff, and renowned for their ability to tell a good tale.

The Australian Antique & Art Dealers Association (AA&ADA) Show is on at Royal Randwick Racecourse at Sydney from the 7 – 11th September. It is the leading industry body representing antique and art dealers in Australia today. Their Code of Practice is surety that your investment in the past is also an investment in your future.