The sixty seat venue is situated in the cellar of the Old Fitzroy Hotel where the new management, Red Line Productions took over in 2014.

Freak Winds, a bizarre three character thriller was revived at the Old Fitz Theatre sixteen years after its inaugural opening there.

Back then it was actor, playwright and director Marshall Napier’s first attempt to write a full length play.

However unfortunately, very recently he had an accident resulting in a shattered tibia.

As a consequence Marshall Napier has had to meticulously rework the play to accommodate this misfortune as he was starring in this production.

I was drawn to the familiar phrase in show business “the show must go on.”

This is a matter of honour and a highly valued principle in theatre traditions, dating back to the nineteenth century.

Faded dark and sombre tones heralded the unsettling atmosphere that gradually evolved as the audience confronted the unfolding, threateningly sinister traits that permeated from two of the three characters. 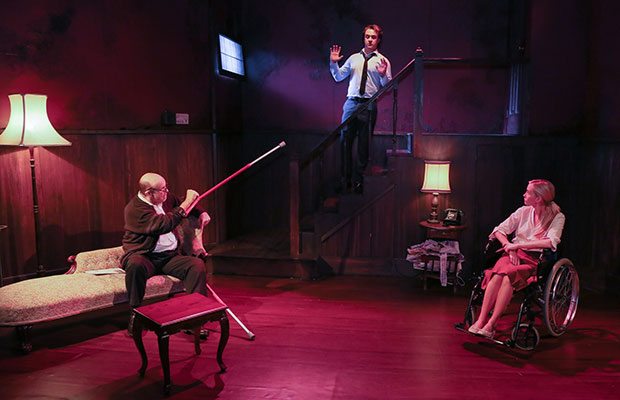 Three lamps, included a standard lamp, right of stage and strategically placed near the chaise lounge.

It allowed for muted light and this intensified the unnerving impression of the violent storm that erupted outside the isolated home of the inhabitants.

A variety of medicine bottles adorned the dresser suggesting that the mental and physical states of the household members could be problematic.

The portrayal of physical ailments permeated the characters and presented disguises for more significant and deep rooted psychological disorders. 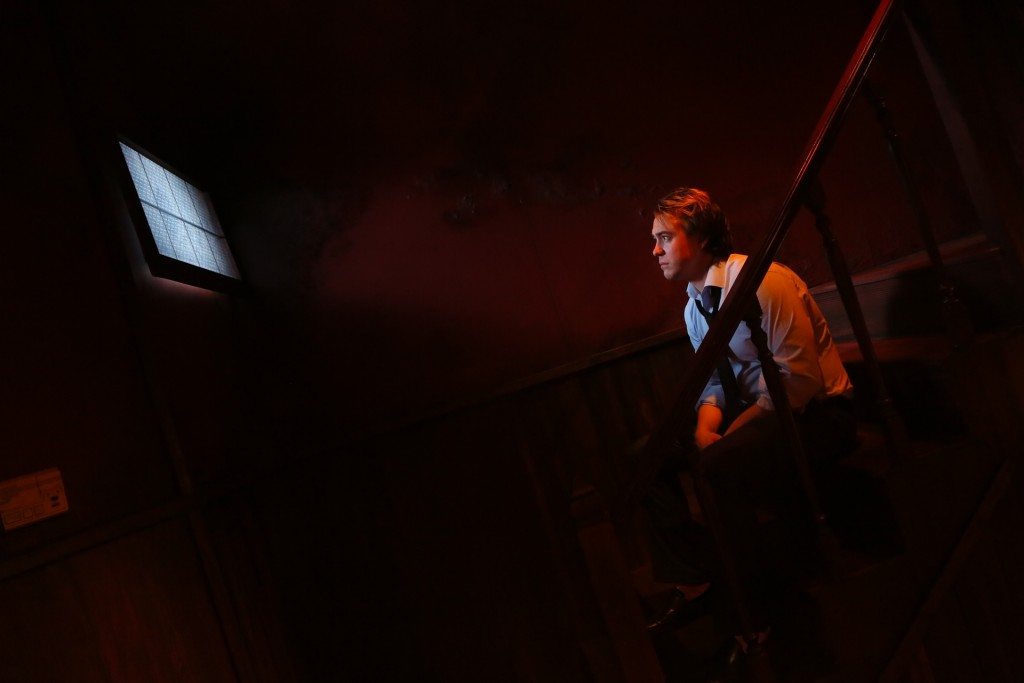 Ben O’Toole’s performance as Henry is sharp and his dialogue shrewdly delivered as he is relentless in his pull to convince Ernest of the benefits of insurance. He steadfastly appealed to Henry at emotional and psychological levels.

He was ardently rebuffed by Ernest who coldly responded with “don’t call me mate.” Ernest was unimpressed and unmoved by the hard sell arguments proffered by Henry.

While Ernest was offstage making coffee, Henry snooped around uncovering a scrapbook with a confronting theme of teenage girls who were victims of kidnapping, sexual assault and murder.

A sexual tension begins to build as Ernest ruthlessly interrogates Henry about his relationships with women. He persistently questioned “what do you do with these women?”

Tension mounted and was intensified by silences until Ernest confronting and edgy, demanded an answer from Henry “what do you think of my scrapbook?”

Confusion and fear began to shroud Henry as he realised he was not only “stuck because of these freak winds” and an oak tree smashed onto his car but he was a prisoner. The unexpected appearance of Myra [Anna Bamford] as she emerged from the ‘depression chamber’ and manoeuvred herself across the stage in a wheel chair, further unsettled Henry.

The verbal and physical control shifted ominously back and forth between Henry to Myra. Ben O’Toole as Henry and Anna Bamford as Myra in Marshall Napier’s Freak Winds at the Old Fitzroy Theatre, Sydney

Ernest zaps Henry in an ugly violent and taunting scene and the menacing tone of the play is cemented. Henry is in excruciating agony and consumed with fear.

The disturbing game played in the dialogue between Ernest and Myra intimated depravity and alluded to evil consequences for Henry.

Nate Edmondson was responsible for auditory effects and he masterfully created sound effects that were both real and frightening.

The threatening sounds of knives being sharpened triggered fear and an uneasy expectation of dangerous and cruel outcomes.

The precise use of sound effects quickened the pulse of the audience adding to the agitated and foreboding nature of the developing disturbing thriller.

Act two began provocatively with the power, control and devious natures of Ernest and Myra further explored and unashamedly exposed.

Henry continued to be trapped, cruelly tormented and inhumanly tortured. This was heightened by Ernest’s confronting appearance in a butcher’s apron.

Conversation developed into a courtroom drama dialogue, a game where Henry was tried with no respect or reference to his innocence.

The audience witnessed betrayal and a metamorphosis of Henry’s character as he was stripped of his dignity and human rights. He was a puppet for satisfying the evil pleasures of two totally corrupt people.

I found the structure of the final scenes confusing and lacking clear resolution.

Marshall Napier is a fine actor with superb credentials, however his accident forced him to use a series of different supports for moving around the stage and this led to ambiguity, it weakened the tension needed for the play to fully succeed.

The full force of Marshall Napier’s stage presence and character portrayal was jeopardised. 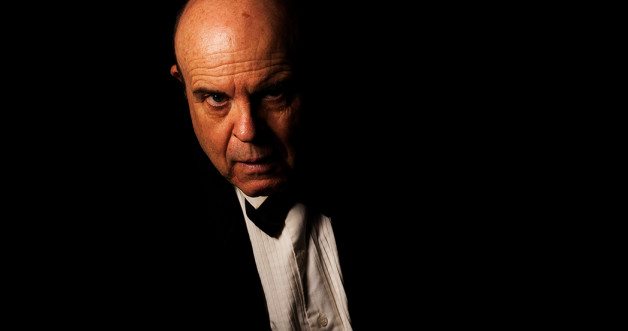 However Marshall Napier is to be congratulated for his diverse talents as playwright, director and actor in Freak Winds. His skills, knowledge and creativity were recognised in these distinct and demanding roles.

Key elements of this production were clearly executed and the evil nature of some human beings was shrewdly investigated and portrayed.

It was not a night of fun but rather a reminder and lesson about the wicked and callous side of human nature and the dangerous properties of power and perversion.

Martyn Cook (1958-2019) was a true Renaissance man, one whose thirst for knowledge was exceeded only by his desire for more; the epitome of a compleat gentleman