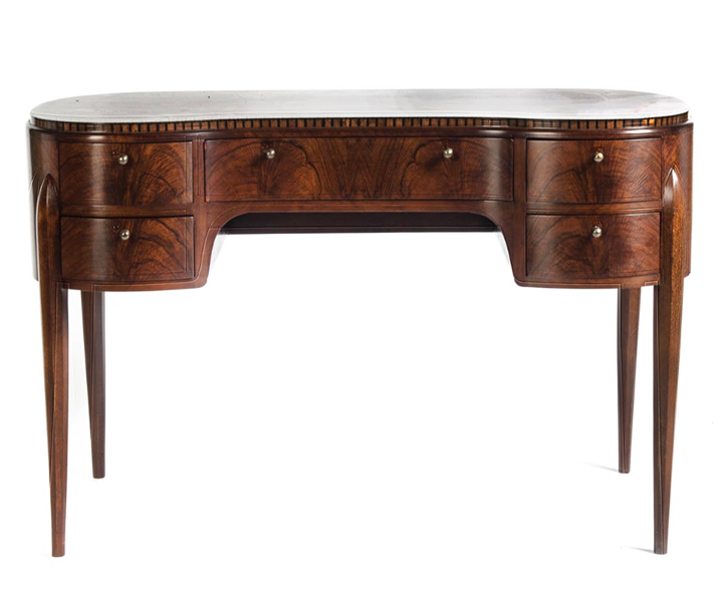 Martyn Cook Antiques in collaboration with Mossgreen is presenting a stylish selling exhibition of European furniture and objects 1900 – 1945 at their galleries, 98 Barcom Avenue, Rushcutters Bay, Sydney.

On show daily Monday to Saturday 22nd August – 19th September, 2014, there are some very exciting and select pieces, including a stunning desk c 1928 by the stylish French firm of Joubert et Petit.

Produced in 1928 from a timber that is stable when seasoned has fine grain and texture as well as a beautiful figure due to its annual rings, the finish on this piece is smooth and lustrous. Made of French Walnut c1928 it is an entirely classic piece of furniture, one suitable for every age. The simplicity of its detailing to highlight the timber and design’s superb qualities is most appealing. 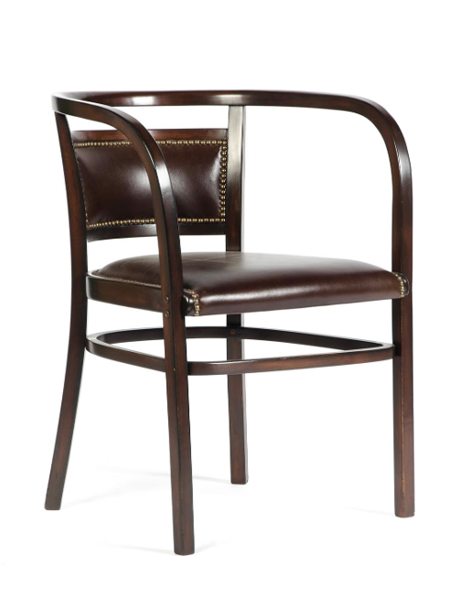 During the 50’s they also layered painted architectural views and landscapes into the range, seeking to regain the halcyon days that had now passed, the firm flourishing 1919 -1953.

Royal clients rubbed shoulders with all those enjoying the sleek streamlined styles of modernism as well as the use of innovative and exotic materials that are a hallmark of its style.

The fashion was for veneering furniture with such aesthetically pleasing materials as shagreen (sharks skin), malachite and parchment.

This happened during the last great ‘classic’ period of design during the twentieth century.

There is also a Bentwood armchair designed by Otto Wagner for Thonet that has remnants of original paper label – Vienna c.1906.

While the history of bentwood furniture dates back two centuries, it was Thonet who propelled the notion of bending woods and subsequently tubular metal into the 20th century 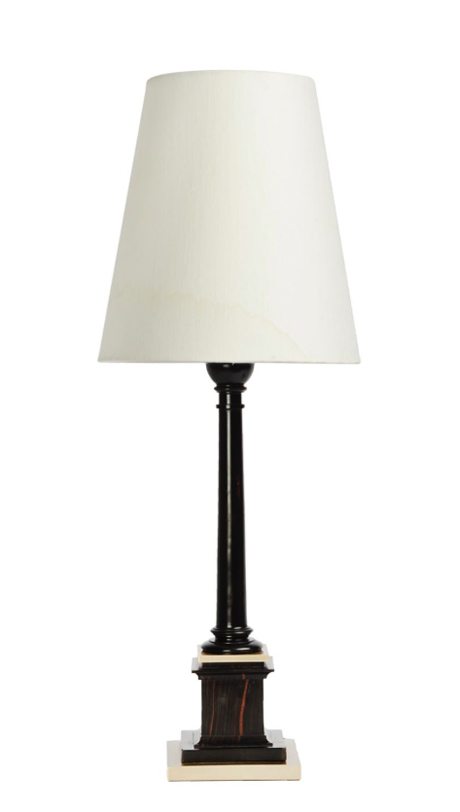 The secret of its enduring success lay in its social, as well as technical serviceability, low production costs and its competitive price.

Since the ‘café’ chair was designed first, Thonet chairs have become indelibly identified as classics of modern design.

Architect Otto Wagner (1841-19180 transformed the appearance and infrastructure of Vienna when it was a world centre of power, science, arts, music and culture.

It was in 1865, notionally the start of the Exhibition period, that the Emperor Franz-Joseph I ascended to power in a period of political turmoil.

He was intent on modernisation that recast Vienna in the light of a formative Modernity of electricity, efficiency and function.

In Austria, Germany, the Low Countries, Scandinavia, Russia and other cities of Eastern Europe by the turn of the 20th century, the select coterie of designers seeking simplicity and strength as hallmarks of their design had grown.

They favoured hand crafting as an important aspect of manufacture.

They were inspired by the Arts & Crafts Movement of the late 19th century, whose philosophy was based on returning to an age when a man’s craft had been admired and valued by society.

However, this new milieu wanted more, wanting their work to reflect the emerging sophistication of the burgeoning middle classes. They also wanted to produce a younger classic image, one that would reflect their generation offered imagination, innovation and great style. The first world war would cause all such movements to falter.

During the 20’s they bounced back, culminating in the designs produced for the 1925 Parisian ‘Exposition Internationale des Arts Decoratifs et Industriels Modernes”.

Art Deco is a term given to the movement in the 1960’s that petered out during the advent of World War II. 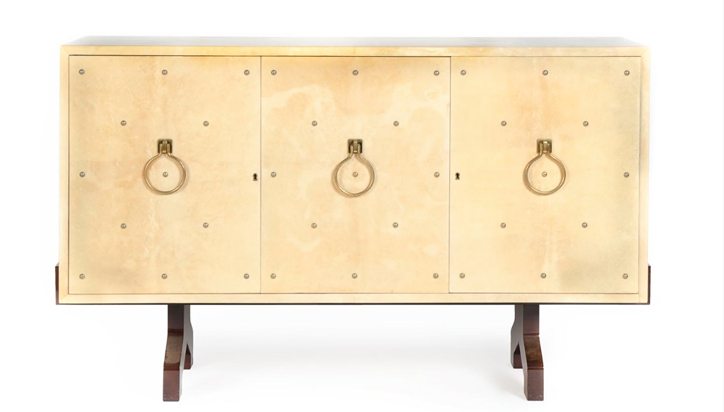 Italian Aldo Tura was an artist craftsman of the early 1930’s, who became particularly renowned for his limited editions of innovative forms between the wars.

His particularly pleasing aesthetic was often informed also by his use of unusual materials. They included parchment, egg shell, wood veneering or goat skin.

He’s represented in this show by a stunning parchment covered cabinet which is polished mahogany inside.

No matter how exotic or appealing, design and style would go on hold for a long time following World War II.

Following the war to end all wars, Borsani and his brothe4r founded TECNO a firm that became known for its research based approach to furniture design using technological advances made during the war. 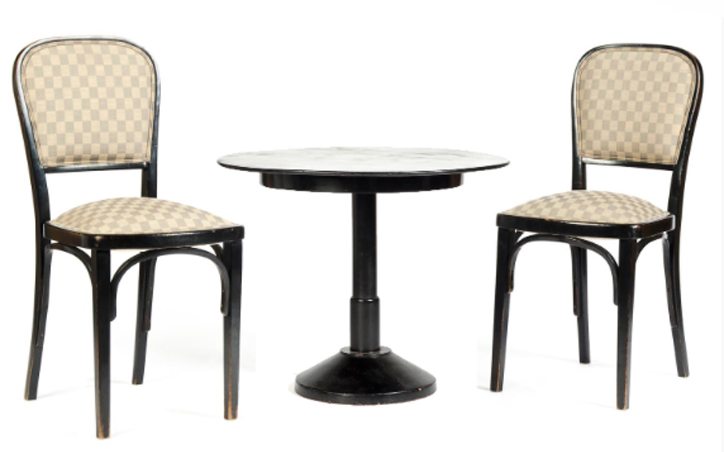 It’s only after a long meditation, and in the second decade of the 21st century, that we are at last embracing all the style movements associated with Modernism, the term that best describes the diverse range of architectural and decorative styles, as well as applied and graphic arts originally created between 1880 and 1940.

Christopher Dresser (1834-1904) is the designer who started the ball rolling. As one of the great protagonists of Japonisme, he was awakened by a journey to the Far East in 1876 of the wonders of simplicity. 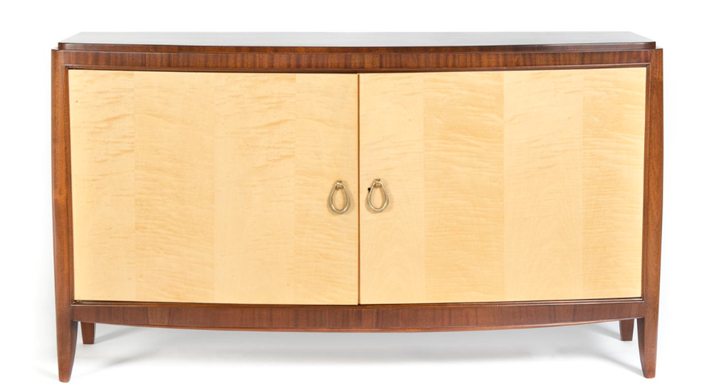 He had pioneered work devoid of ornamentation with severe lines, where, with the minimum use of materials, form and decoration became secondary to the presence of the substance, and where the actual function of the object stood in logical relation to the design.

The result was a formal discipline, which has echoed throughout the designs of the 20th century. 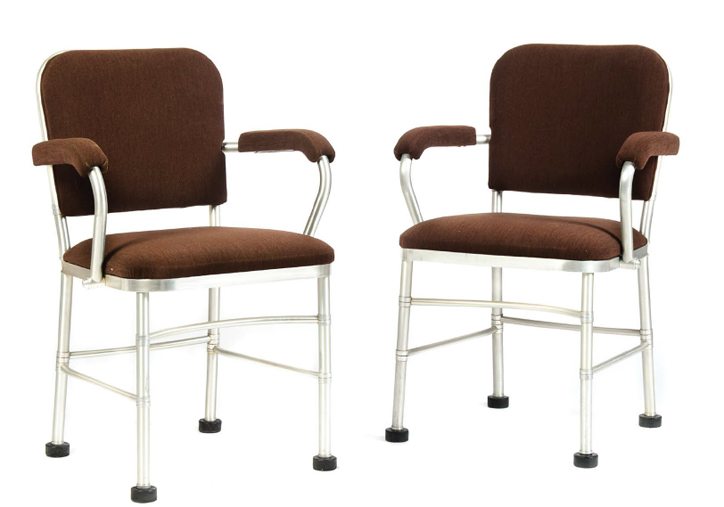 J’adore the circa 1935 pair of tubular aluminium desk chairs designed by the American Warren McArthur, which were incorporated in the setting for the film Mission Impossible II !