Those who want pieces that resonate well in any setting, either professional or personal, will find in his salon a range of superb choices. Some were made during the neoclassical style period in England, Europe and America.

In France this superb symmetrically disposed style movement began towards the end of the reign of King Louis XV (1710-1774). It was in favour during the reign of Louis XVI (1754-1793) as well as after the French revolution, when it changed shape and gained ‘military overtones’. 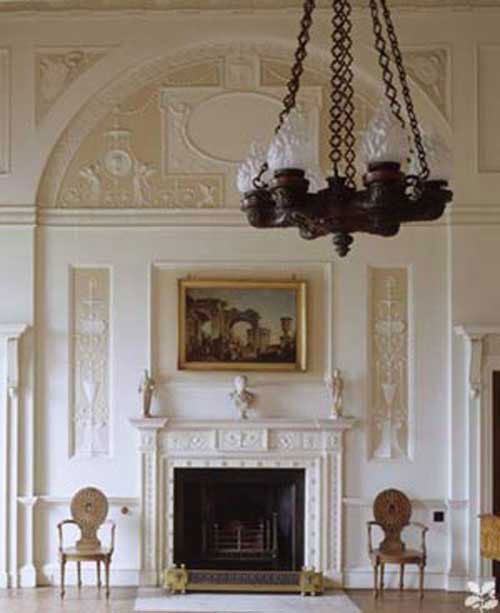 An Argand bronze lamp hanging against the backdrop of a superb neoclassical interior by Robert Adam at Harewood House, Leeds, Yorkshire in England - the style's invention changed the course of history in interiors, costume, powder, paint and allied artifices

The world that amused or intrigued during the age of light and elegance in the decorative arts and mind, was first lit by candlelight until Swiss chemist Aimé Argand invented colza oil lamps in 1783.

Just one Argand lamp could produce light six to ten times the output of a candle. From then on reflecting light became a design obsession. This happened through glass on the walls, hanging from the ceiling, on a table and as well, through the use of elaborately gilded surfaces.

This great age of reason in the decorative arts and mind became preoccupied with self examination and multiple mirrors were used for reflecting light with merciless clarity.

There were two distinct phases to the evolution of the neoclassical style in interior decoration, as introduced and championed in England by Scottish born London based architect Robert Adam (1738 – 1792).

He was busy investing in the future of style after a Grand Tour of Europe and studying at Rome. The superbly elegant refined and sophisticated style he preferred persisted for about forty years, taking hold after he had returned to London from Italy in 1760 to set up practice to cater for his client’s growing fascination with archaeology. This lasted in England until well into the last ten years of the century (and beyond in the countryside). The slightly heavier, much more exotic neoclassical style emerged when George III’s son George became Regent of England in 1811.

While his father was ill, the Regent’s interest in architecture and interior design and decoration served as a catalyst for the enthusiasm of his subjects.

To promote his innovative ideas he opened his newly remodelled Carlton House to the public in 1811, with some 30,000+ visitors flocking to see it in one day.

The Prince’s preferences were for stronger interpretation of classical ornament and form. Gilded to refract the light, rather than simply symbolize wealth, the house featured many mirrors.

There is nothing so ‘fabulous’ as a pairing of antique pieces with interesting stories attached to them such as the setting with a mahogany console and expanded gilded ‘convex’ mirror currently in Martyn Cook Antiques stylish showroom.

It may at first glance seem an odd pairing, however they are not.

Both have a great deal in common, being made during the same historical period, the early nineteenth century.

We also know because of history that this mirror comes after the invention of the sensational Argand lamp; there was no reason anymore to use candles on the sides of the mirror to reflect the light and its rare form only developed after that time. 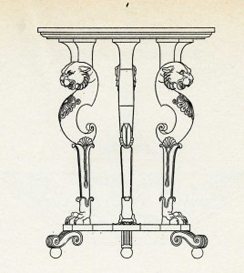 The mirror is English, the console French.

They are both in the neoclassical style, which we again know through history, responded to motifs and designs gleaned from new archaeological discoveries in Italy and Egypt.

This happened after excavations began in 1738 at Herculaneum and in 1748 at Pompeii and Napoleon Bonaparte’s sensational Egyptian campaign (1798-1801) fuelled the fire.

Napoleons’ expedition included Baron Dominique Vivant Denon (1745-1825) a gifted young draughtsman and engraver with a taste for adventure. He was among the hundreds of other artists including poets, talented scientists, scholars and linguists who went with Napoleon and recorded all they saw.

The gilding and increased amount of more advanced mirror plate used to flank the convex mirror in the centre reflected light far more than ever before, ensuring that life indoors after dark was now exceedingly enjoyable, at least for those who could afford the Argand lamp.

Console tables, such as the Chateau Mello table, were designed to sit against a wall. They came into use during the first decade of the nineteenth century their designs heavily influenced by all the archaeological discoveries.

The lion had been used for thousands of years, a popular motif with kings, princes, patricians, pretenders and potentates, because it symbolized strength and power.

They had been very popular on Roman furniture, revived by late neoclassical designers, including Dutch born London based connoisseur and designer Thomas Hope, who featured them in his 1807 publication Household Furniture and Interior Decoration. 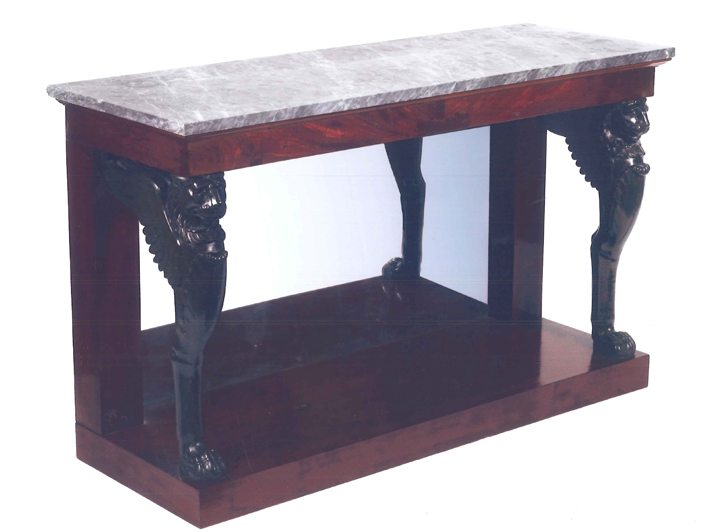 The mahogany, oak and ebonized fruitwood table retains its original Bardiglio Imperiale blue marble top, plus an intriguing architectural element known as ‘monopodia’, taking the form of a pair of winged lions to surmount the curvaceous cabriole legs that hold it up standing on sturdy lion’s paw feet.

Here the monopodia, which means a single leg support used to steady, are carved from well-figured mahogany.

It was a most highly favoured timber of the time and its density allowed for far crisper detail.

Mahogany remained in vogue right up until the time of a Continental blockade in 1806 after which it difficult to obtain.

The French were entirely unable to buy it from the English colonies so they turned to other exotics and local fruitwoods.

While this impediment increased the price of mahogany timber in England, the upper classes were still able to secure it, albeit at a price so it only reflected their wealth and status far more. 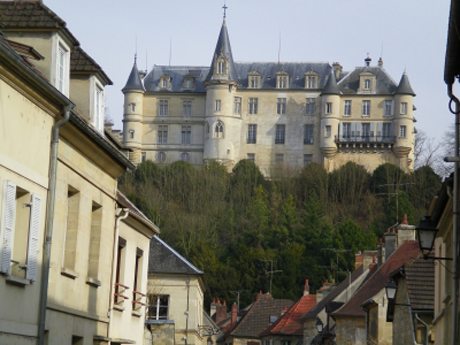 To find it in France at that time, meant you had to have the highest of connections or otherwise, very deep pockets.

This table was believed to have been originally made for Baron François-Alexandre Seillière (1782-1850), who lived at the Chateau Mello, overlooking the medieval village of Cires-les-Mello, one hour from Paris in the region of Picardie.

The mirror covering its lower back surface, was there to greatly enhance space and reflect light.

The Baron was a wealthy French industrialist, fine art and book collector and he purchased the Chateau Mello, whose foundations go back to the ninth century, in 1819.

Today the belongings of the Seilliere family are scattered around the world, many having been sold off by the youngest Achille at Christie’s London on July 14 and 16, 1888 in a famous sale. This included a renowned and fabulous library. La Bibliothéque de Mello was assembled in France during the nineteenth century and considered one of its choicest and most important collections of books during its time. Many found their way into the British Library. Mastery over reflection was only the first stage of a cultural revolution that influenced the relationship between man and his image for evermore.

Most archaeological evidence of glass mirror plate dates from three centuries after Christ in Egypt, Gaul, Asia Minor and Germany. Digs in Egypt uncovered mirrors made and backed with lead that have glass with a convex curve behind the lead over which a coating of gold or tin had been applied.

Variations on this process originally prevailed it seems, for centuries well into the Middle Ages, as reality and reflection supported each other reciprocally.

The mirror over the table at Martyn Cook Antiques is in a rare form, made by Thomas Fentham, London, a fact known from its still adhered trade label. It was probably made in the decade before Thomas Fentham’s death in 1808.

Thomas Fentham & Co had an establishment located mainly at 136 Strand, nearby Somerset House as well as at numbers 32, 49, 51 and 130 at different stages in his career. Fentham’s company made numerous looking glasses, as described in the Dictionary of English Furniture Makers and elsewhere, and both convex and concave mirrors.

He also manufactured all sorts of picture and glass frames as well as glass for exportation.

Thomas Fentham supplied frames for such illustrious patrons as connoisseur and collector Charles Townley (1782) and the 3rd Earl of Egremont (1794, 1799-1800).

Townley is renowned for saying ‘in every art good models give birth to ideas by exciting the imagination; theory furnishes the means of expressing those ideas, practice puts these means in execution and this last part, which is always the most common is also the easiest’

Thomas Fentham’s lengthy will of the 12 September suggests he was a relatively wealthy man as he requested a monument to be erected in his memory.

He also set out the basis for the business to be carried by his son, Thomas John Fentham, and son-in-law John Bainbridge. He made provision for his nephew, William Fentham, and for his five daughters. The English court recorded actions against his will by family members as late as 1846 (The Times July 14, 1846) by which time the business was closed.