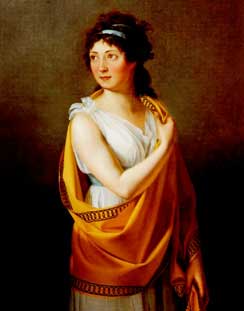 Following the revolution and during the reign of Napoleon 1 in France the ornate costumes of the Kings and Queens of France quickly gave way to garments of revolutionary simplicity. Based on the craze for neoclassical architecture they were emulating the classical purity of ancient Greek statues. Ladies wore dresses of flimsy material, often dampened so they would cling revealingly to their body. Doctors reminded ladies the climate of France was far harsher than that of Greece, but a fashionable Frenchwoman’s only concession to the elements was to don a voluminous shawl. High waisted and free from any unnecessary ornament, which might detract attention the tunics, inspired by Greek and Roman antiquity, favoured colours were yellow, white, lilac and pistachio green.  The Merveilleuses as these ladies were known were the talk of Paris. Among their members were Madame Juliette Recamier, Madame Theresa Tallien (pictured), Madame Hamelin, Mademoiselle Georges and Mademoiselle Lange. Two of them dared to walk down the Champs Elysees in October 1798 almost naked wearing only gauze sheaths. Napoleon entirely disapproved of this type of behavior and when Madame Tallien and two of her friends appeared as nymph huntresses, clad only in light tunics that reached barely to the knees with bare feet adorned with rings in light sandals with purple straps, he declared ‘the time of fable was over and the reign of history had begun’ The ideal jewel to complement these new high waisted opaque dresses had to be simple, geometric and flat. It was often a cross, which symbolized a martyrdom for their cause, rather than religious belief.