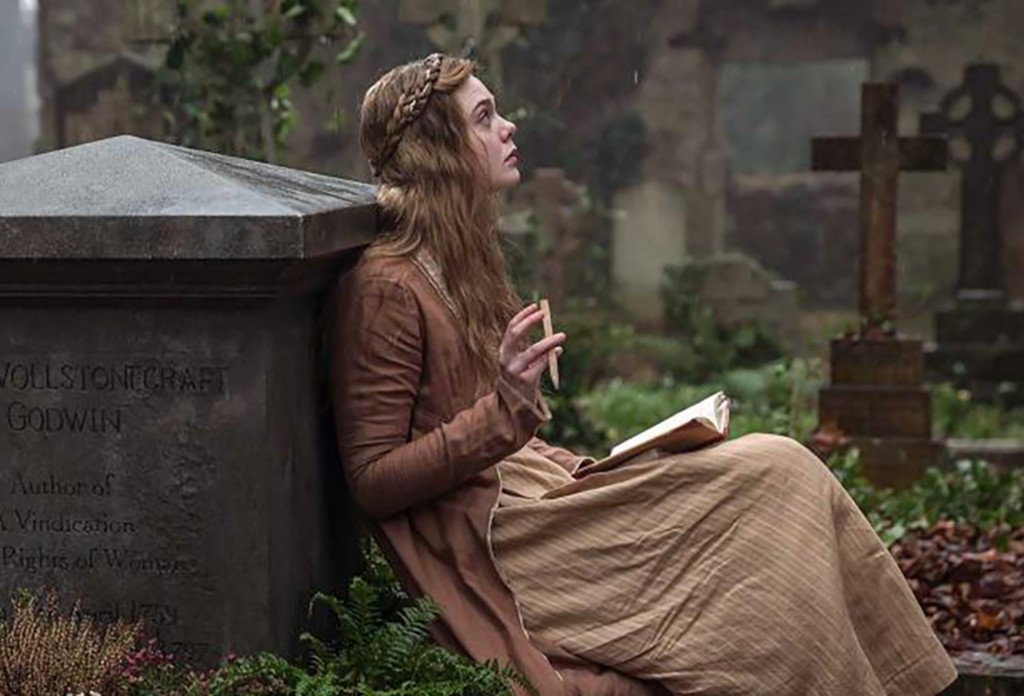 The British Film Festival in Australia presented the film Mary Shelley recently, as part of its line-up of desirable stories to see. A script by Australian writer Emma Jensen ensured the film enjoyed support from the Australian and New South Wales governments.

The difficulty for Emma Jensen was bringing so much information about the protagonists into a manageable script to deliver a story on film set during an age of reform when scientific discovery, dazzling artistry and both political and social scandal, reigned.

This is when romance was presided over by passionate poets, although it was still something society as a whole would be able to embrace as daughters were still being married off to secure family fortunes and ideas that they could have the freedom to marry for love and whom they chose, for the majority was in reality, a flight of fantasy. 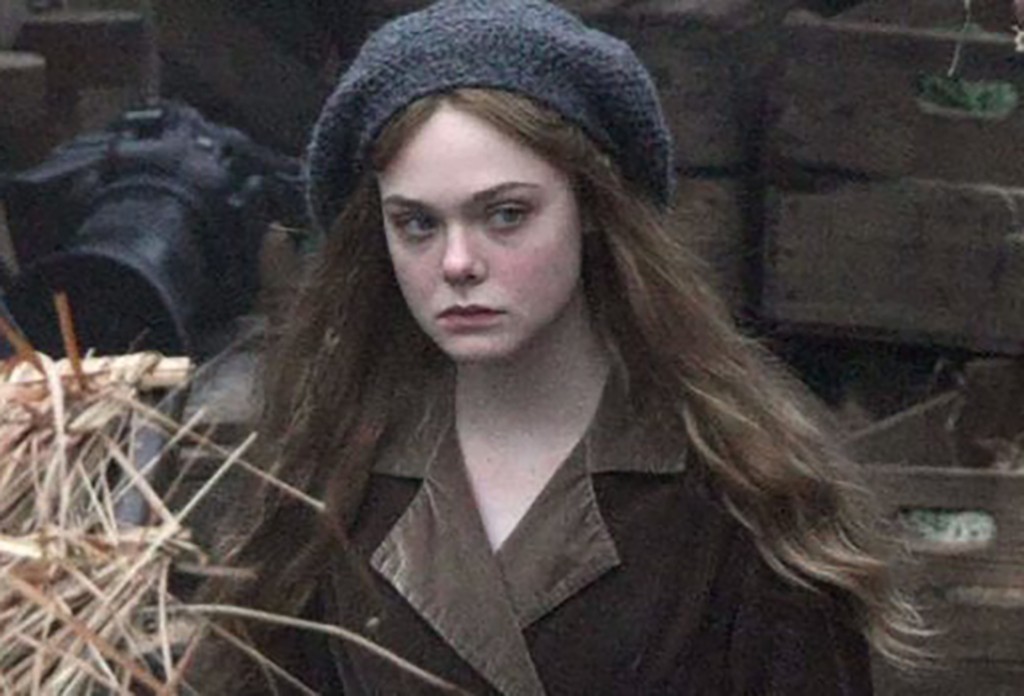 Directed by Haifaa Al Mansour, the producers gathered an impressive ensemble cast; Elle Fanning, Douglas Booth, Bel Powley, Joanne Froggatt, Tom Sturridge, Maisie William, Stephen Dillane and Ben Hardy. Funding also came from the Irish Film Board and from Luxembourg, where the cast and crew were on location for the main filming, with some investment from the UK and US as well.

The adjustments made by the author in the historical time line however, will be sure to have literary purists turning in their grave. 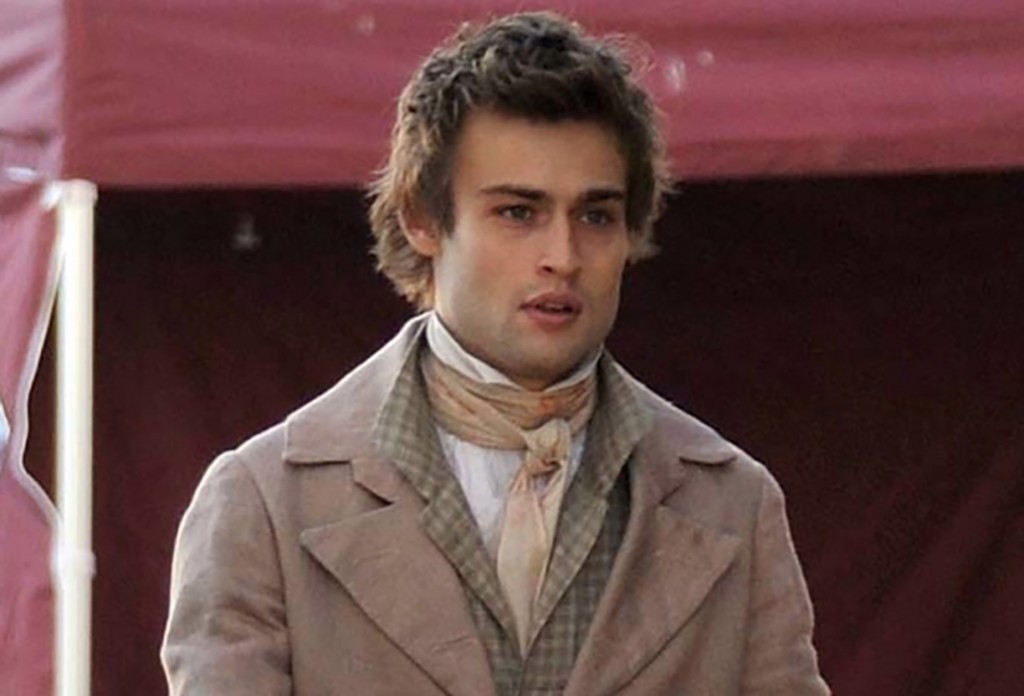 Today Mary and Percy Bysshe Shelley have gained a following among the intelligentsia in our society, who today admire the bond they formed based on their mutual respect for each other and a professional collaboration.

This has been proved by his notations in the margins of her hand-written text for Frankenstein, which is today held in the Bodleian Libraries at Oxford. They will also want to gloss over the very real attitude of society at the time, that single women who formed sexual relationships with married men were for all intents and purposes, fallen women, never to be redeemed or entertained publicly again.

Indeed they were lucky if anyone, let alone their parents ever spoke to them again. The pleasure attached to private theatricals gained increasing popularity between 1780 and 1830 in England and Europe when the fashionable vogue reached a peak. Both aristocratic and country gentry families developed private theatres as part of their estates, where talented friends and an occasional actor put on performances. There was no shortage of reading matter, nor of the growing interest in reading… which expanded rapidly from the accession of George 1 to the death of George IV 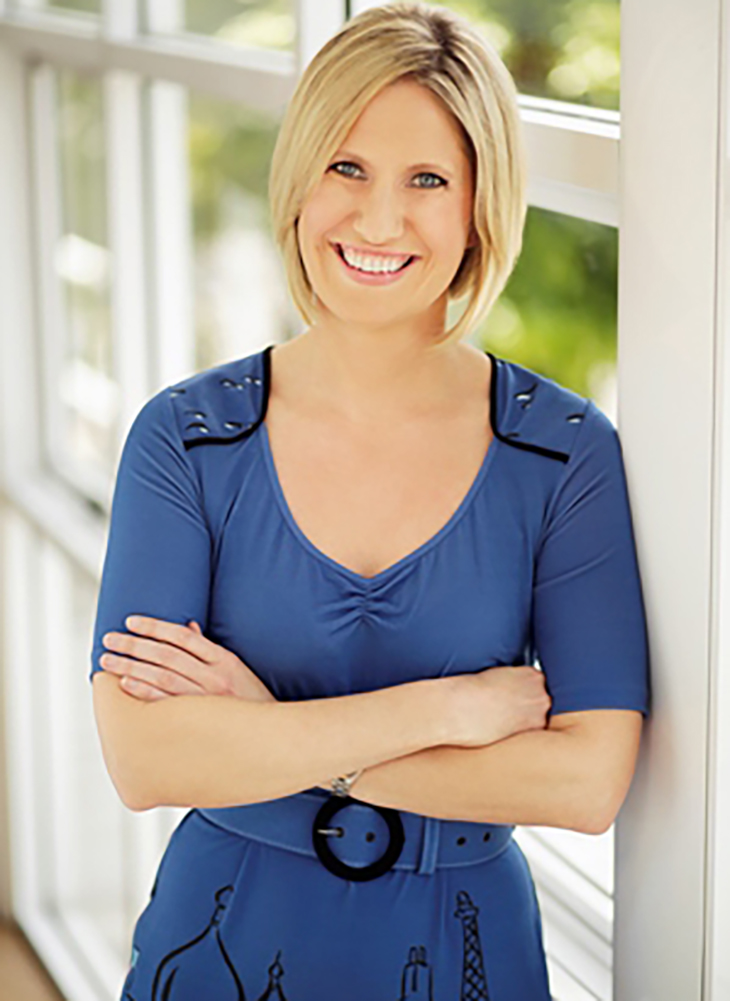 Emma Jensen developed the script for her film and went out to find those who would help her to bring it to life.

Having carried out her research, Jensen became intrigued by how and why the woman who became a skilled editor, critic, influential travel writer, literary historian, devoted mother, and a dabbler in verse, as well as in the new genre of the short story, Mary Shelley aged 18 was able to create the novel ‘The Modern Prometheus’, unleashing the monster Frankenstein one of the great ogres conjured out of her imagination, into the world.

The One remains, the many change and pass;
Heaven’s light forever shines, Earth’s shadows fly;
Life, like a dome of many-coloured glass,
Stains the white radiance of Eternity,
Until Death tramples it to fragments. 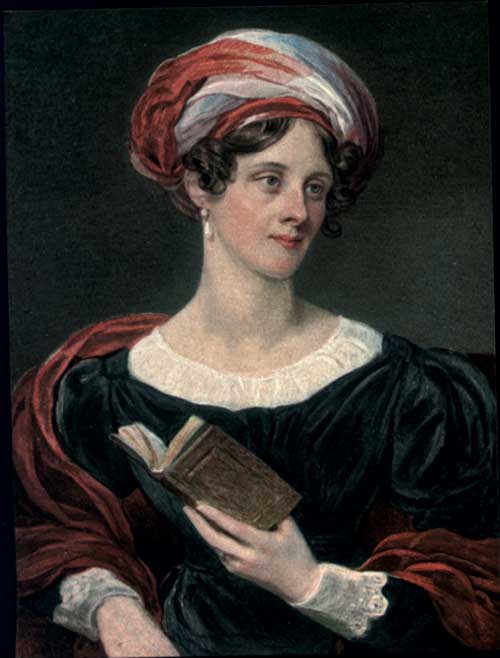 Mary and Percy Shelley’s works were produced in one of the greatest productive epochs of imaginative literature ever. Poetry, novels, essays, diaries, confessions, letters and memoirs poured from the presses, giving those able to read new avenues of life to explore.

Her father William Godwin was indeed a scholar who we discover taught his daughter Latin in an age when that would be seen as far from normal. It indicates he recognised her lively mind and wanted to not only educate it, but also expand it beyond the boundaries set for women in her time.

While I know it had historical flaws instead of being incensed by them I chose to find this film quite diverting and captivating. There were many parts I wished they would have been able to expand, but it was already long and ambitious in scope.

Most people would find the obnoxious drunken aspects of Lord Byron’s life objectionable and indeed such behaviour while admired among many today is just as much abhorred.

How do you encapsulate a single life into a film of two hours when you have such a rich and expansive story to tell and such amazing sources to satisfy? 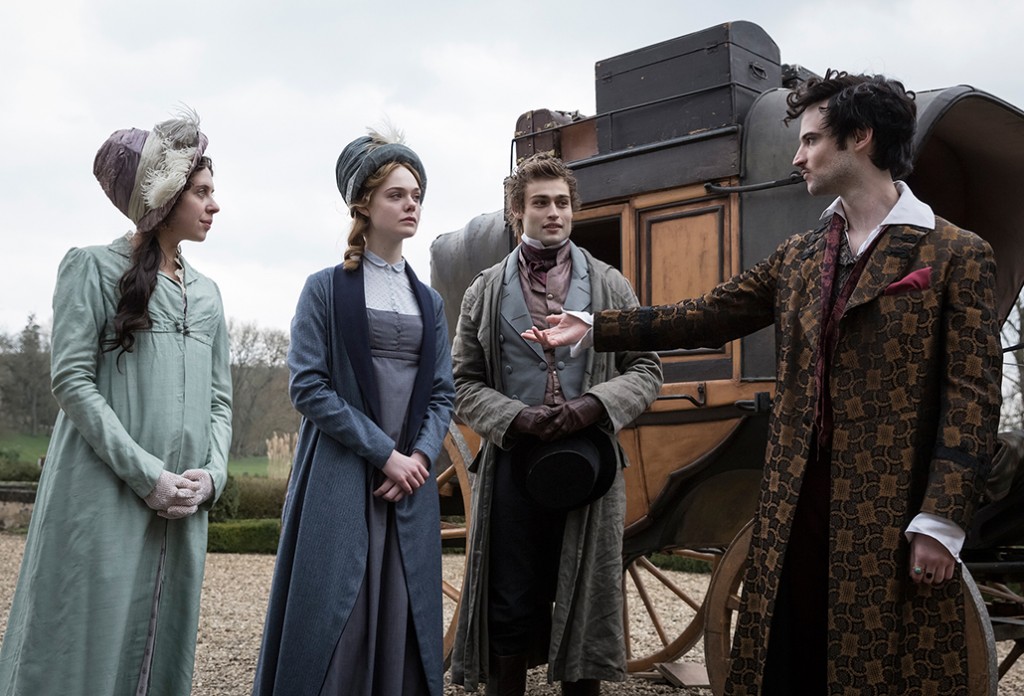 Perhaps only as this author has done by distilling Mary’s meeting with Shelley and they’re subsequent elopement, travels and travails into a narrative easy for those not wanting to dig too deep into history, to follow.

We visit the days spent with the by now quite dissolute Lord Byron nearby to Geneva, where Mary Shelly shattered social respectability by living an unconventional life with the man she loved while carrying on her mother’s fight, advocating equal rights for women. 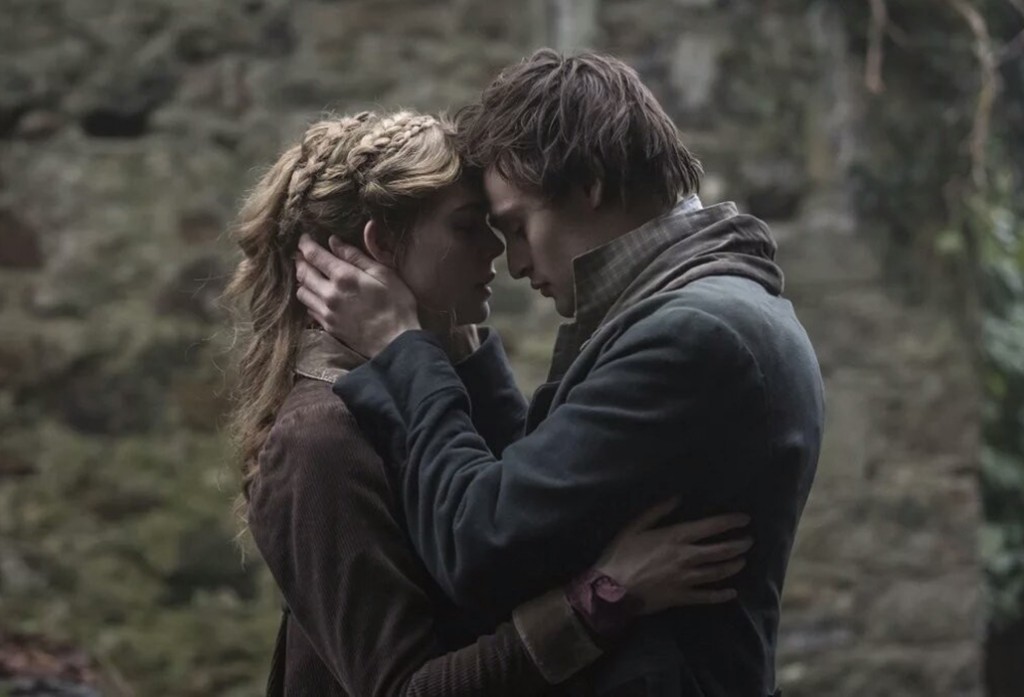 Mary Godwin married Percy Bysshe Shelly in 1816 after his first wife committed suicide, not only taking his name as both society and church demanded, but also never making herself subservient in any way.

Indeed, the film presents Mary as a woman with the seeming strength of a lion who not only had to protect herself, but also her step sister Claire (Bel Powley) who went along with her and Shelley on their travels where she became one of Byron’s lovers and bearing him a child. 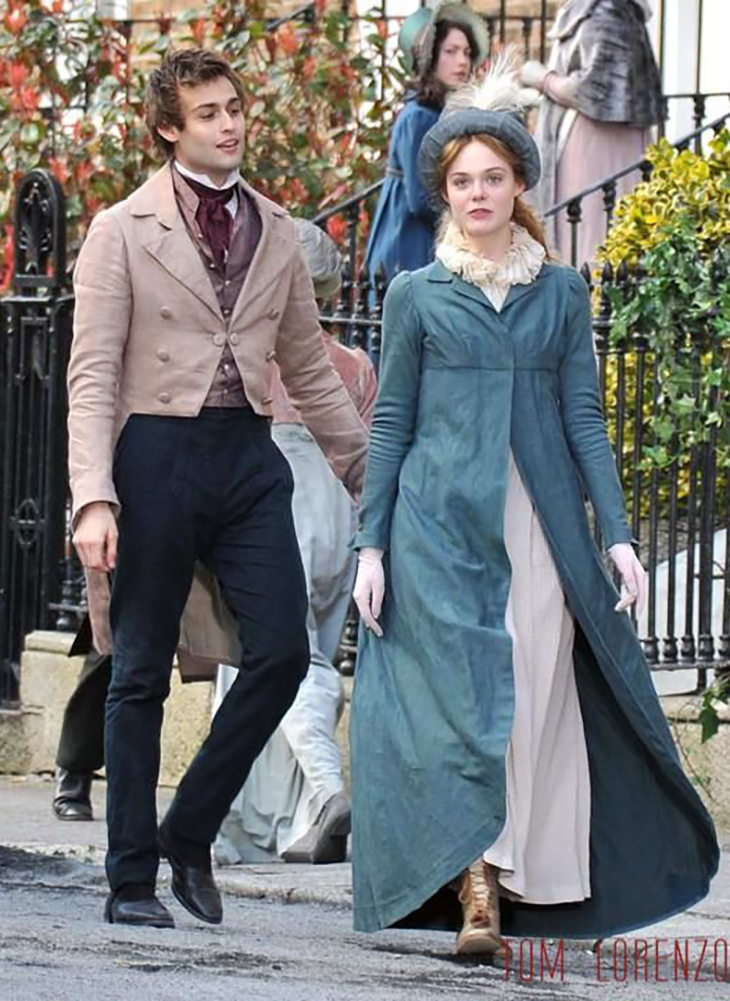 As the turn of the 19th century came and went, the large flourishing ever burgeoning middle class population were wanting to read about people who possessed the vices and virtues common in human nature. In short, they were wanting to have it acknowledged that their own human frailties were commonly shared. And these protagonists certainly have many. At this time the number of newspapers increased greatly. By the 1790’s one news vendor in London was offering 12 daily papers, ten tri weeklies, two bi weeklies and a dozen weeklies to say nothing of specialised papers like the bi-weekly Lloyd’s Lit.

Wife of philosopher William Godwin the mother of Mary Shelley, Mary Wollstonecraft had stood in her own right as one of the major figures of the period before her daughter and integral to a radical circle that also included English poet, painter, and printmaker William Blake, today considered one of the seminal figures of the romantic age.

Mary Wollstonecraft’s Rights of Women published in 1792 highlighted the ‘means and arts by which women had been forcibly subjugated, flattered into imbecility and invariably held in bondage. 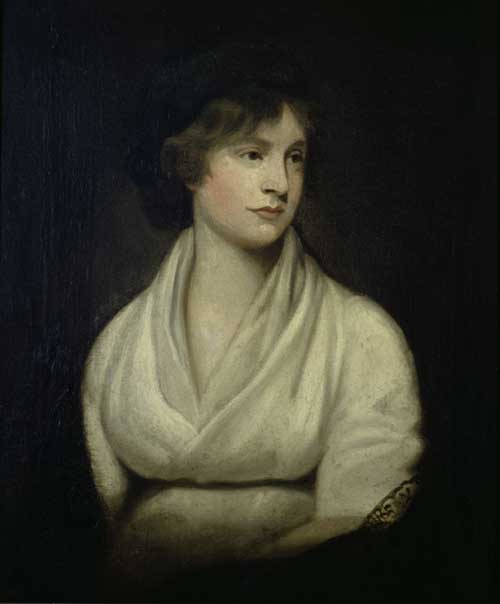 Now regarded as one of the founders of modern British Feminism Mary Shelley’s mother was in Paris during the Revolution where she fell in love with her daughter’s father aged 38 but sadly died not long after giving birth to the child.

The influence of the mother she never knew and the ideology and reality of what happened during the French Revolution would have a profound effect on her daughter Mary who was sixteen when she eloped to the continent with Percy Bysshe Shelley.

They became neighbours of Lord Byron on the shores of Lake Geneva and she visited his house often and it is where she began her famous work the novel Frankenstein in 1818.

The Poetry Foundation in America explains on their website: 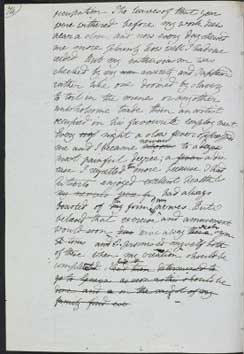 ‘The story of the composition of Frankenstein is often told, though it is hardly ever told the same way twice. Though critics have called some of its details into question, the best account of the novel’s genesis is Mary’s own, in her preface to the 1831 edition.

Sometime in mid-June, the literary discussion of the Shelley-Byron party turned toward German ghost stories. Byron suggested each member of the group (Shelley, Byron, Claire Clairmont, Mary, and Dr. John William Polidori) write a ghost story in the same vein. In the next few weeks Mary produced a short story which, when expanded, became Frankenstein

She wrote in her journal; … for eight years I communicated, with unlimited freedom, with one whose genius, far transcending mine, awakened and guided my thoughts. I conversed with him; rectified my errors of judgment; obtained new lights from him; and my mind was satisfied.

Now I am alone—oh, how alone! The stars may behold my tears, and the winds drink my sights; but my thoughts are a sealed treasure, which I can confide to none. But can I express all I feel? Can I give words to thoughts and feelings that, as a tempest, hurry me along? Is this the sand that the ever-flowing sea of thought would impress indelibly? Alas! I am alone.

Of their three children only one, Percy Florence, survived infancy and Mary returned to England with him at her side in 1823 and she lived to see him inherit his grandfather’s baronetcy and marry. 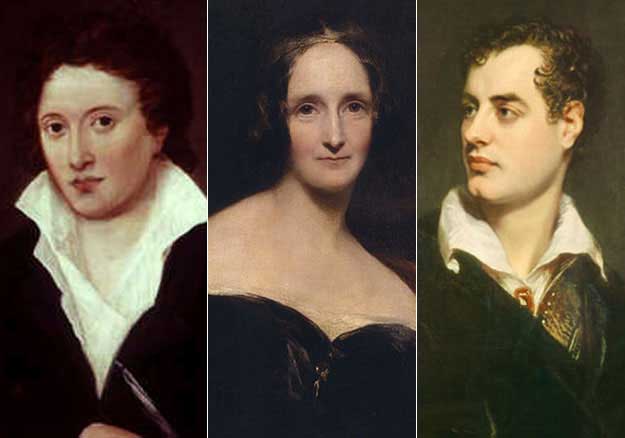 A portrait by Richard Rothwell of her hung over her fireplace at Boscombe 2 miles from the centre of Bournemouth, together with portraits of her father and mother. When it was exhibited at the Royal Academy Shelley’s description of her was in the catalogue

How beautiful and calm and free thou wert
In thy young wisdom, when the mortal chain
Of custom though didst burst and rend in twain,
And walked as free as light the clouds among.