The Victoria and Albert Museum (V&A) at London will be presenting works from the artistic traditions of China, which have been drawn from collections all around the world from 26th October to the 29th January, 2014.

Between the Peking man discovered by anthropologists in 1927 in a cave south west of the modern city of Peking and the Peking man of today there is a span of some 400,000 years. This show will survey the evolution of painting styles and their subjects for only 1200 of them, revealing how the techniques of painting on scrolls and silk developed into a fine art form. This exhibition is an ambitious undertaking to say the very least, and the many fascinating stories attached to the breadth of this extraordinary vision will offer an insight into why China’s reputation for being inscrutable grew up when it was inaccessible to the west behind a great barricade of mountains for centuries.

It will also help viewers to discover what happened when contact was finally established and how that impacted on the rest of the world.

Many of the works on show are very rare and have never been exhibited in the United Kingdom before.

All art forms in Chinese culture have been affected in one way or the other by its two main indigenous philosophies, Confucianism or Daoism.

The impetus of Confucianism concentrated on man’s relationship to man while Daoism sought to discover how man could best fit into the great universe in which he lived. It was from the romantic readings of Daoist philosophers that both the art of gardening and that of landscape painting in China would draw its influence.

The root meaning of Dao is often debated. In its early phase it meant a road, or way, however these took on a higher meaning and Dao is suggested as now meaning the ‘totality of all things’ – past and future – that which is in a constant and dynamic state of transformation. During the period 700 – 950 paintings were made for tombs and temples, for the liturgy attached to Buddhist worship including votive offerings that were made by artists who are unknown. The oldest and what is considered the finest dragon scroll that survives is the ‘celebrated Nine Dragons by Chen Rong, who depicted mythical creatures who represent and are symbolic of the many forces of nature existing in Daoism. In the period represented by The Quest for Reality, there was growing interest in the natural environment and landscape scenes predominate as artists sought to capture the shifting qualities of light. It includes the famous era of Tang dynasty poetry, which was introduced by Po Chu-I who became legendary in Chinese history. He insisted poetry must be understandable by an ‘old country women’ and his style influenced many modern Western writers when it was discovered.

The Chinese approach plants from a religious, spiritual and symbolical prospective rather than from an interest in botanical specimens.  The famous three friends of winter often depicted in art form a trilogy that has classical associations for the Chinese.

The pine represents longevity, the plum wealth and prosperity while the bamboo is about integrity and perseverance. They were so popular they were also painted onto porcelain vases for centuries.

How to define the periods of Chinese history is constantly debated.  The Sung dynasty lasted from 960 –1279 and it is at this time that the development of printing became central to a great burst of intellectual activity.  In 105 there was the discovery of paper, traditionally credited to the eunuch Ts’ai Lun. Feng Tao, traditionally regarded as the inventor of printing, presented the royal family a complete edition of the classics in 953 and the Sung dynasty reaped the benefits of this new aid to scholarship and learning.

Sung Dynasty Emperors sought to recreate the splendour of the T’ang court building palaces, attracting writers and artists to their court. They established porcelain, lacquer and silk factories on the outskirts of the capital Kaifeng.

While they avidly collected paintings from artists they admired they were also known to have wielded the paint brush themselves.

It was during the Yuan dynasty (c1260-1368) that knowledge of Cathay filtered through to the west. Established by the Mongols, Kublai Khan gained the title Great Khan by defeating his brothers and embracing Chinese culture.

Striking innovations in the next section Embracing Solitude: 1250-1400 include works from small groups of monks and scholars who were equally skilled at painting, calligraphy and poetry.

Relatively near and modern in the long context of Chinese history in 1368 when the Ming period began, many scholars consider the supreme periods of the major arts, such as literature, calligraphy and painting had already passed.

During the period that followed, from the middle of the 17th century when Chinese influence on western culture really began to intensify, the Manchus, who to the mainstream population the Han Chinese were really foreigners, ruled it. Artists working on silk using expensive pigments and rapidly expanding cities such as Hangzhou, Nanjing and Suzhou became important new centres for painting.

Traditionally sericulture in China was a specialized activity, which had been developed in the Neolithic period by farmers in north central China. Through the centuries state taxes were payable in silk.

Production was controlled to ensure its prestige for fine silk clothes and furnishings marked special occasions in life and these garments were often interred with the dead.

Each stage of the very labour intensive production demanded great skill and co-ordination. Keepers had to be alert when it came to the right moment to harvest the fragile filament and unwind it from the cocoon, because if the chrysalis emerged the continuous filament would be broken.

The filament was almost a kilometre long. Once the skeins of silk were ready production moved into workshops where waste silk was carded to form floss for padding winter cloths or, otherwise spun to form short threads for manufacture of what we call raw silk. 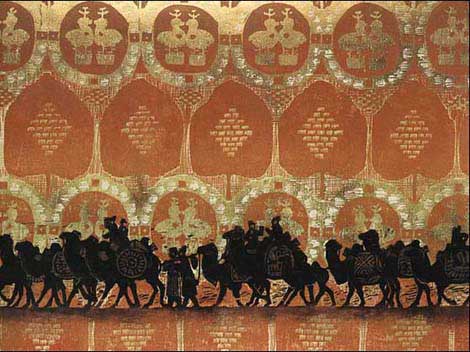 Silk Traders against a background of Silk

Silk filaments are extremely durable and have a tensile strength greater than that of steel and so painting on silk became an activity that was all about prestige and position.

Romantic literary characters or episodes in history, landscapes of great gardens and rare animals and plants that were admired were recorded in pictures made for seasonal festivals or other auspicious occasions.

When Emperor Wan Li sat on the Throne of Heaven ruling over the Middle Kingdom in the Forbidden City from 1573 to 1620 Elizabeth 1 was contending with Mary Queen of Scots and many other thorny issues.

The collapse of the Ming dynasty was a turning point in the history of China; there was a transitional period between the death of the fourteenth Ming Emperor Wanli in 1620 and the establishment of the Ching dynasty in 1644. 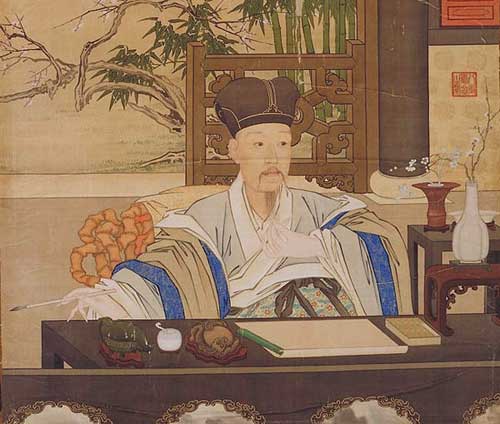 This period is under the theme of Challenging the Past and Looking to the West from 1600 – 1900.

From 1685 the Manchus really began their ascendency towards the splendour and power they achieved during the eighteenth century.

It was during their reigns that China emerged as the greatest Imperial power in Asia, and under their enlightened rule the China Trade with the west flourished.

The traditions attached to painting at this time were radically altered with the arrival of a Jesuit Priest Giuseppe Castiglione (1688-1766).

He arrived in China in 1715 where he was to pass his life at the Court of three of its Emperors K’ang-hsi, Yung-cheng and Ch’ien-lung.

Castiglione at the Court of the Chinese Emperors excelled at painting both horses and flowers.

While many may not embrace his style, he did have great success and influence on the creativity attached to Chinese painting during his lifetime, especially painting in perspective.

They learned from him the techniques of linear perspective and chiaroscuro.

Before his arrival that was not a skill they had developed, but after he arrived and within a reasonable amount of time as he became pre-eminent among a group of European missionary-court painters, his influence would soon begin to be seen in their works that finally were able to represent light and the illusion of depth.

Castiglione combined the propagation of the Christian faith (in the face of daunting difficulties) with professional dedication to the artistic commissions of the Emperors.

Martin Roth, Director of the V&A said: “The V&A has been collecting and exhibiting Chinese art since the Museum was founded. It is an honour to present this once-in-a-lifetime experience of seeing the greatest examples of Chinese painting together and understanding how they were created. We are indebted to our numerous lenders around the world for allowing us a rare opportunity to present these magnificent masterpieces, a number of which are national treasures and have never before left Asia.”