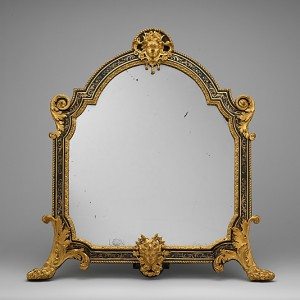 Mastery over reflection was the first stage in a cultural revolution that influenced the relationship between humans and their image evermore. A mirror allowed a knight to learn gestures of civility. It promoted the ideal gentleman by helping him to refine his image and bodily adornment. Appearance became everything. ‘Sweet mirror invented in order to know that which our own gaze cannot see’. A Sicilian visiting Paris in the seventeenth century observed ‘Ribbons, lace and mirrors are three things the French cannot live without’. The mirror an instrument of social hierarchy and aristocratic ideal gradually became commonplace and a symbol of equality, feeding our narcissistic need for recognition. The metaphorical distance between the polished surface of a mirror from antiquity to one made of glass for Louis XIV’s Chateau at Versailles is immense. It is probably about the same as comparing oilpaper and plaited rushes used in wind eye insets of ancient houses, to that of plate glass windows in a modern department store. What role will the mirror play in our future. Will we always remain haunted by what is not found within it?