Jacob van Campen (1585-1657) architect, painter, landowner and wealthy bachelor introduced ideas of Palladian architecture into The Hague in The Netherlands

A nation’s significance historically is not necessarily linked to its size or the number of people making up its population. Small countries have often taken a leading role in world events and garnered great wealth.

The United Netherlands was brought about by the Treaty of Munster in 1648, which ensured a country so long divided by religion; the Protestant north and Roman Catholic south, came back together again after a turbulent time apart.

Tiny as it was during the seventeenth century The Netherlands, of which Holland is part, grew to dominate world trade with extensive commercial interests and colonies in Asia and America.

The building of residences for ‘top people’ became an important activity. Building in a manner appropriate to one’s station in life, neither too meanly nor grandly, a focus. King Willem-Alexander and Queen Maxima of The Netherlands arrive for opening of the newly restored Mauritshaus, a museum to excellence in Dutch mastery during their Golden Age

The last vestiges of the old medieval Gothic style were swept away as Jacob van Campen (1585-1657) architect, painter, landowner and wealthy bachelor introduced the ideas of sixteenth century Venetian architect Andrea Palladio (1508-1580) into The Netherlands.

Palladianism, as the style has been termed, was produced by Palladio following discovery of the wonders espoused by the first century Roman architect Marcus Pollio Vitruvius, via his surviving treatise on architecture.

Together with his younger colleague architect Pieter Post (1608-1669), Campan built stunning buildings in The Netherlands. One stands out. The very beautiful, restrained classically inspired Mauritshuis.

This ‘jewel box’ of a museum filled now with priceless jewels, was originally built for Count Johan Maurits van Nassau-Siegen (1604-1679) in The Hague in 1633.

For me it’s the perfect house, glowing richly and warmly in the noonday sun in its wonderful setting overlooking a lake.

It’s groundbreaking style in its age enormously influenced King Henry IV (1553-1610) in France, especially when developing property in the Marais district of Paris.

It also helped inspire the continuing development of the restrained classical architectural refinements that would take place in both France and throughout England during the eighteenth century, as its pleasing countenance became more widely known. 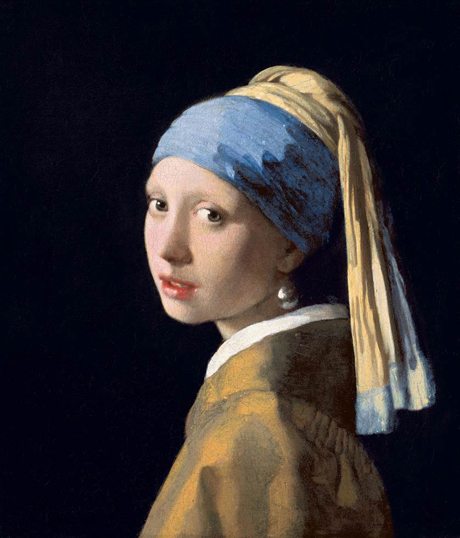 The Mauritshuis was a home for its occupiers over the years,  one that was filled with a fine collection of art on walls of an interior more on the scale of a very grand house.

The rooms were human in scale, built in honour of the principles of man and nature; proportionate measurements relating to those of the human body.

Following two years of being closed, the Mauritshuis was superbly restored, refreshed and renewed to become the ‘ideal museum’.

On the 27th June, 2014 it was officially re-opened by His Majesty King Willem-Alexander of The Netherlands.

He and his wife Queen Maxima were greeted at the entrance by the head-turning ‘Girl with a Pearl Earring’ by the artist who was a modest celebrity, Johannes Vermeer (1632-1675).

She is after all viewed as his masterwork, made famous again this century by a movie based on Tracy Chevalier’s 1999 novel.

The Mauritshuis is once again gleaming, gracious and dignified, sitting silently by its lake, rhythmically reflecting its lovely image of quiet order and propriety. Renovated and cleaned, she now sings with sheer delight. 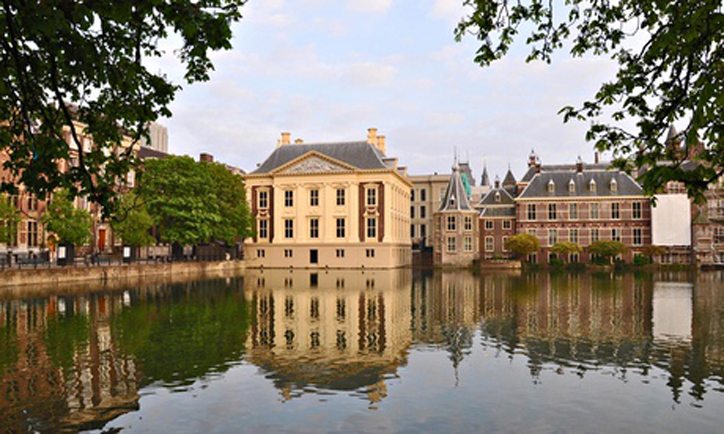 It’s undemonstrative and unpretentious really for what was essentially a princely palace for a military hero, a cousin to the Prince of Orange of the royal house.

At the Mauritshuis. the selection of works on show now for all to see is truly marvellous. The 120 that formed the core of the collection had to be rescued from Napoleon via a quiet word delivered personally by the Duke of Wellington! Its interior rooms have been restored to display a select number of Dutch and Flemish masterpieces from the ‘golden age’ of Dutch mastery in art from the 15th – 17th centuries. Vermeer’s View of Delft has had the same treatment and this wonderful landscape of the city made famous by its blue and white ceramics, today considered so symbolic of Dutch ingenuity at that time is a stand out.

It seems to be the ‘ideal sized city’, one perhaps we would all want to live in, a jewel in the crown.

The scene seems to have been painted on a glorious summer evening when the clouds and the sky were just illuminated enough to reveal its gentle hues amidst an expanse of sparkling spires, diamond window panes and high pitched roofs with its radiant sky above. There is a mind boggling whole room of works by that incredible luminary Rembrandt van Rijn (1606-1669), including his late self portrait (1669) and The Anatomy Lesson of Dr Nicolaes Tulp, 1632. 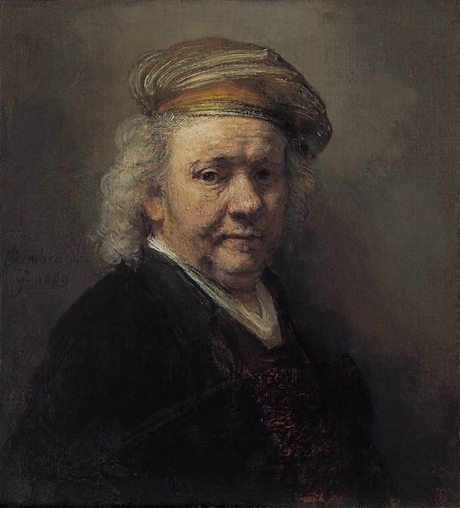 It is an important picture rendered in the evolution of medicine, originally commissioned by the Amsterdam Guild of Surgeons for their Guild Room.

Rembrandt was only 26 when he painted this group portrait of eager Amsterdam surgeons with great dynamism and energy.

Dr. Tulp stands apart as he demonstrates the flexors of the corpses forearm to an audience of some seven surgeons (they still know their names).

In the bottom right corner is a large open book normally identified as a copy of Andreas Vesalius’ De humani corporis fabrica 1543. The corpse was a notorious criminal who had just been hanged.

Rembrandt was only one of the many artists fighting to keep his head above water by earning money on the side, as artists struggled to be recognized in their own city in the midst of a huge artistic outpouring that saw foreign artists such as Holbein, patronised by Dutch merchants.

Just like all Rembrandt’s other portraits, the one depicting his aging face draws you into his world. At this stage of his life, his face is sporting deeply etched lines, craggy pits, pustules or moles. His shaggy hair topped by a cap in dashing style.

The fleshy tones of the face are impressively captured, with layer upon layer of oil paints that ensure its luminosity for all time.

He is depicted with his falcon on his forearm, which is protected by a leather half sleeve.

He was not a low-level game-keeper, but a nobleman and the virtuosity for which Holbein has become so renowned is most apparent in the fabulous contrasting of textures on his clothes and hawk.

Your eyes glide from the feathers, to the textures of the satin, leather and fur. Paulus Potter’s The Bull 1647 is a stand out in the paddock of such paintings. No wonder so many people love it; the realism, the naturalism and its depiction of the vagaries of country life are brought together to be entirely appealing, appreciated and celebrated. 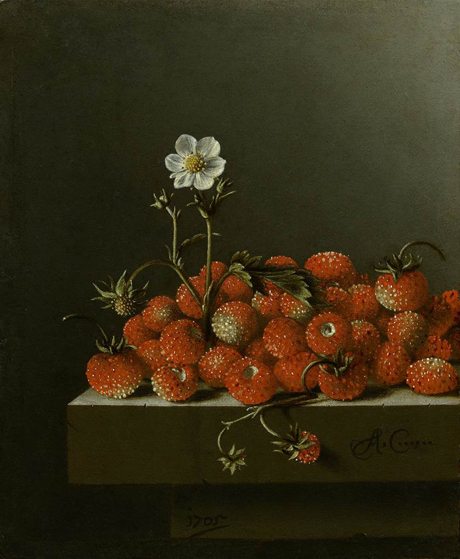 This was not an image ever seen before, although purists who always seem to like to spoil everyone else’s fun, tell us today that the bull didn’t ever really look like he does; he’s a composite, a figment of the imagination of the artist.

Well, bully for him!

A  Still Life with Wild Strawberries (1705) by Adriaen Coorte (ca.1665-1707) is guaranteed to have you salivating over this sweet succulent ripe summer fruit.

Must say I love the juxtaposition of the rich roundness of the fruit piled high against the restrained spare surroundings and the defined simplicity of the shelf.

They come complete with the fruit’s flower, just to remind us of of how they come from nature, through beauty.

Little is known of this painter of such unpretentious views, intimate as they are in their intentions and painted with what has been described as ‘wondrous tenderness.

Totally adore his work, his fabulous bunch of white Asparagus in the Rijksmuseum (1697) almost blew my mind when I saw it the first time, marvellously minimalistic. It’s not surprising that works by the very renowned Antwerp based Peter Paul Rubens are there.

His Old Woman and Boy with Candles, painted 1616-1617 is compelling with its melodramatic lighting effects borrowed from that famous Italian master Caravvagio.

This is one Rubens kept in his own collection during his lifetime and is considered one of the Mauritshuis Museum’s top ten.

He was painting at a time when fashionable ideas caught on quickly, a fact scholars confirm through studying trends across Europe at this time.

Ideas percolated down through the social strata slowly, the process taking years and indeed in some cases, decades. The Netherlands was very influential and in France King Louis XIV (1638 – 1715) was aggravated by their continued success.

By the end of seventeenth century Louis’s Chateau at Versailles had become a giant shop window, gaining for France supremacy in all the arts. Louis and his 1st Minister Jean Baptiste Colbert (1619-1683) both believed their success in ‘selling the fine and decorative arts’ should always serve the glory of France.

Colbert worked 15 hours a day seven days a week, running every government department except that of war and between 1661 and 1671 the national revenue doubled. By 1683 the economy of France was four times bigger than that of England and ten times the revenue of the Venetian republic.

The Netherlands in the north remained during his long reign, the richest and most envied by all. Today the Mauritshuis stands as a symbol to wealth, which is not about money at all, but about how its people both value and care for its great art. It’s a rare pearl of a house, truly representative of The Netherlands and its people.

Royal Cabinet of Paintings
The Hague, The Netherlands The renovated Mauritshuis now has an underground expansion into a building on the other side of the street. Little about the character of the museum has changed, the appearance and unique homely atmosphere preserved, thanks to the design of Hans van Heeswijk architects.

The most obvious change is the relocation of the main entrance to the forecourt. Visitors descend via the stairs or lift to a light foyer, connecting ‘old’ and ‘new’ underground.