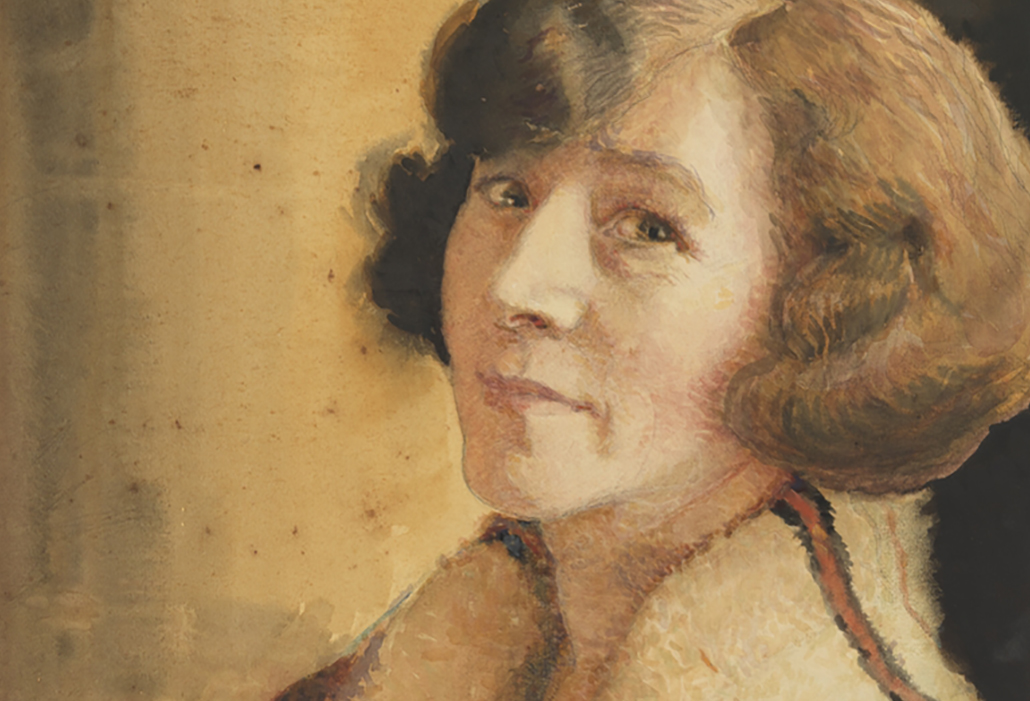 2018 was the year many people in Australia, and around the world, celebrated 100 years of wondrous adventures from the acclaimed English born Australian author, illustrator and cartoonist (Cecilia) May Gibbs (1877-1969). Her adorable gumnut babies, also known as bush fairies, delighted generations of children.

Tales of Snugglepot and Cuddlepie: Their Adventures Wonderful, was first published in 1918 and is very much part of Australia’s national heritage. 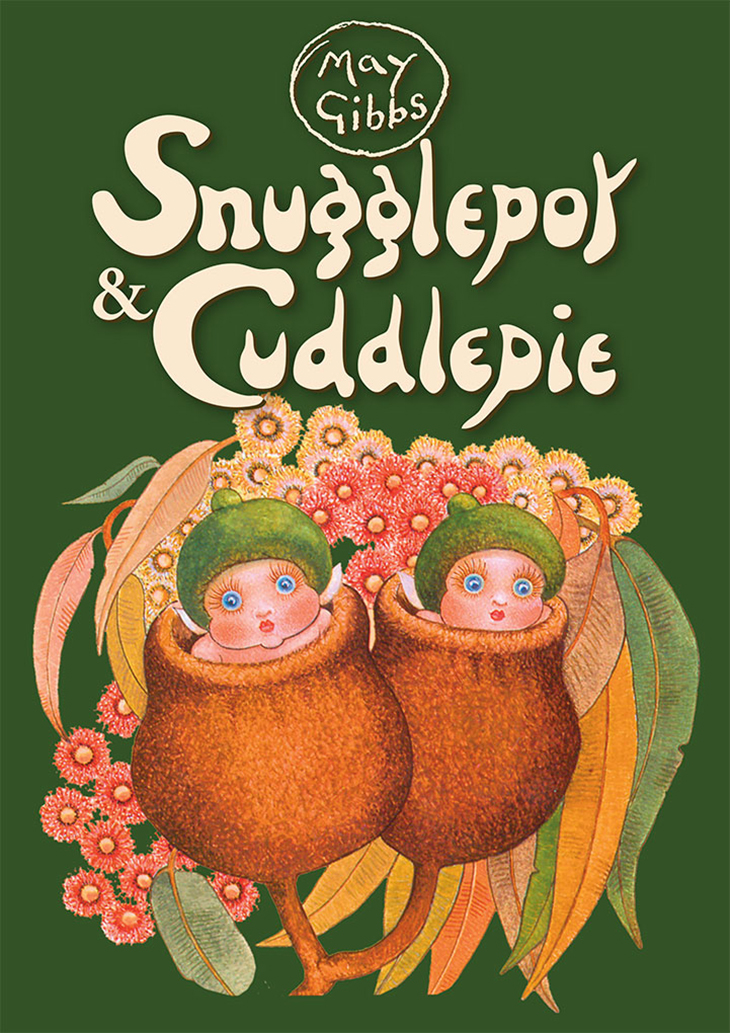 Snugglepot and Cuddlepie © The Northcott Society and Cerebral Palsy Alliance 2016

May Gibbs first book about The Gumnut Babies was published in 1916 in Sydney. Snugglepot and Cuddlepie are foster brothers, bush babies who live in the magical and wondrous Australian bush. Their exquisite cherub faces, innocent liquid amber eyes sparkling with a subtle ripple of mischief, rosebud mouths with playful lips and their soft-blush angel’s cheeks make these characters irresistible.

Opera singer Dame Joan Sutherland (1926-2010) eloquently articulated. ‘Wanderers from Australia’s shores are for ever drawn back to nostalgia for the Bush, nowhere more faithfully depicted than in the works of May Gibbs.’

In 1986 my daughter Jessica was given a soft toy, an adorable gumnut baby replica. This cherished toy began her love affair with everything related to May Gibbs. She was excited and cautious when the Banksia Man, whose form was based on a genus of around 170 species of the plant family Proteaceae, first made an appearance in the guise of a soft toy at Christmas. We were to discover much later that the origin of the Banksia Man was an ‘altercation’ May had with Isaac an employee on her family’s country property.

May was only eight years old at the time.

‘Sitting on almost every branch were ugly little men’ from this experience of confrontation, May witnessed and created her Banksia Men.

Jessica’s collection of memorabilia continues to grow and her passion for May Gibbs has never wavered and to this day, she is loved by children and adults alike. 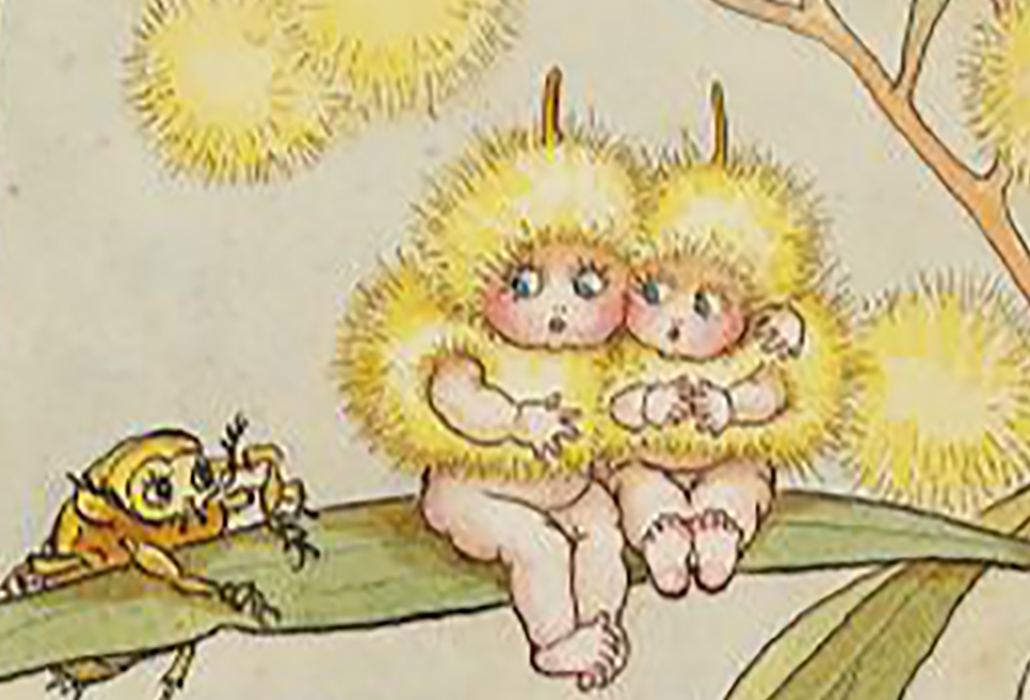 Her quintessential artistic fairy-tale response to Australia’s land is unique.

The expressive nature of May Gibbs characters and their enchanting adventures in the Australian bush, captures the hearts and minds of her ever growing fans across the world. Her gift of mixing reality and imagery and opening reader’s hearts and minds to endless possibilities is gently bewitching. 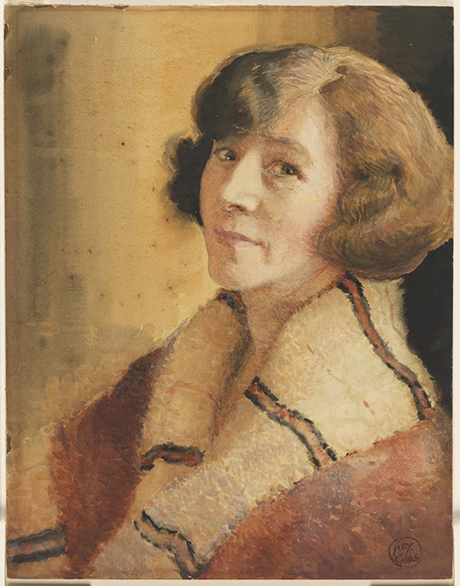 Cecilia May Gibbs was born in England in 1877 and named after her mother, but to her family she was always known as Mamie. Last year an enchanting picture book, Mamie by Tania McCartney was published.

It celebrates May Gibbs life and legacy through a delicately nuanced narrative inspired by May’s childhood. The book is an endearing entry for a new generation of readers to make discoveries, including May who ‘could draw as soon as she could walk.’

It’s a modern perspective touching on May’s imagination, fascination with nature and her artistic finesse.

May immigrated to Australia with her father Herbert William Gibbs, artist, cartoonist and public servant, mother Cecilia Rogers and older brother Herbert in 1881.

They travelled aboard the Hesperus where her younger brother Ivan was born at sea. In 1885 sadly May’s mother gave birth to a still born baby. However, in 1887 Harold the youngest and first Australian born child arrived to complete the family.

The family settled in South Australia but after several hardships and disappointments with rural life they moved and were ultimately established in Perth in 1897. They were accomplished with lines of magic, forms of beauty and beguiling innocence. Her illustrations and stories bought a life of their own to the Australian bush.

The hair, hats and skirts of Snugglepot and Cuddlepie were modelled on Eucalyptus flowers.

May took inspiration from the Australian Golden Wattle for The Wattle Babies.

Her parents were very artistic and always encouraging. May was particularly influenced by her father’s pictorial prowess. He was a wonderful role model and most certainly a strong artistic reference.

The earliest artwork still in existence is A Happy New Year card for 1887created by May when she was ten years old. This card was given to her childhood friend Mary Bird. It was at this time that she lived in an idyllic landscape where frogs were in abundance. The frogs would later appear in her Gum Blossom Ballet illustrations in Tales of Snugglepot and Cuddlepie.

In 1889 when May was twelve years old, as a result of a competition, her Little Folks artwork was published for the first time in the Christmas edition of the Western Australian Bulletin magazine.

Little Folks ‘showed its derivation, as May paid homage to the classic illustrations of childhood by the British artist Kate Greenway.’ This is acknowledged in the comprehensive, informative and sympathetically penned May Gibbs: More Than A Fairy Tale An Artistic Life by Robert Holden & Jane Brummitt. The wildflowers of Western Australia were a poignant source for May’s drawings and paintings over the next ten years. Her advanced ability and talent was widely recognised and celebrated in her exhibitions and art prizes. During this time May’s dedication, diligence and discipline were qualities that would remain with her for the rest of her artistic life.

Throughout the 90’s she developed as a fine botanical artist until she left for England in 1900, where she studied art. She returned to Perth in 1904 and contributed articles, illustrations and cartoons to the Western Mail. May returned to England in 1909 but ill health forced her to back to Australia in 1913.

She married Bertram Kelly, a mining agent, in 1919 and together they settled in Neutral Bay, a green harbour side suburb on the north shore of Sydney.  Well known Australian architect and designer B J Waterhouse designed Nutcote, the home where May Gibbs spent the rest of her life. 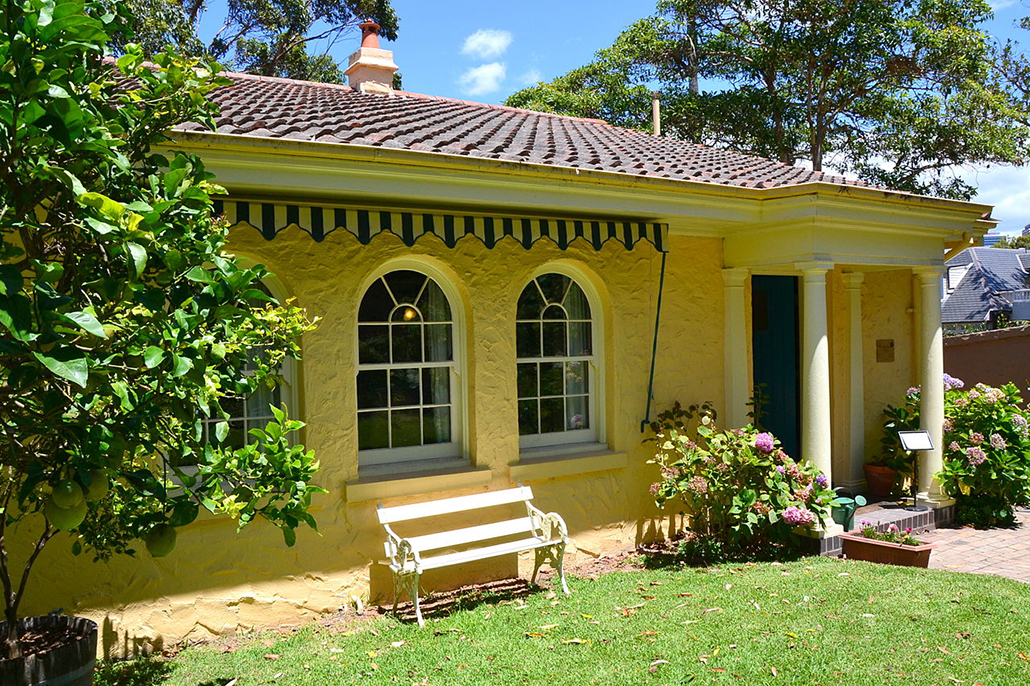 Today Nutcote and part of its gardens, classified by the National Trust of NSW, has been authentically restored and is open to the public. It is cherished by many visitors especially children.

She loved her garden and it evoked many images for her artworks, illustrations and stories, which included ‘Bib and Bub’, a very popular cartoon strip, which survived sundry newspaper mergers to run until September 1967. 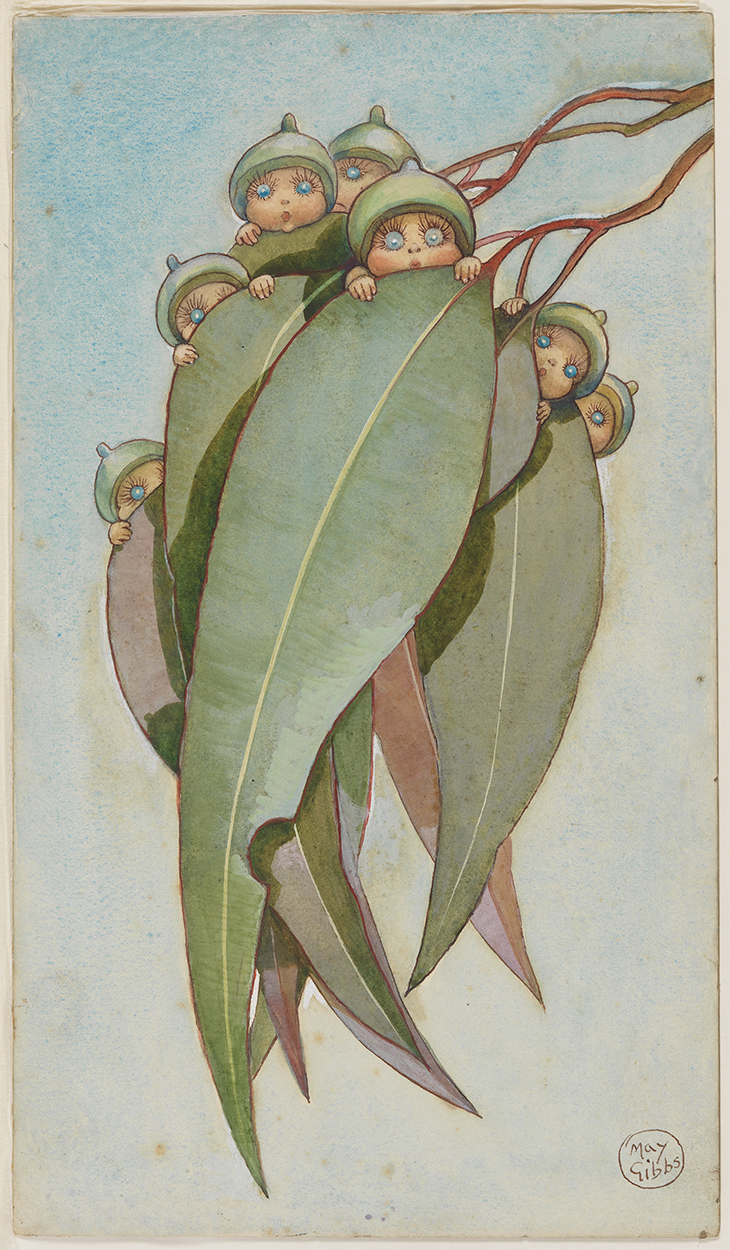 In 1993 a beautiful picture book A Day With May Gibbs At Nutcote by Jean Chapman and illustrated by Sandra Laroche was published.

This is an enlightening introduction to her life and gives children a historical perspective of May Gibbs’s time in her beautiful and much loved home and garden.

May was a committed conservationist aware of the fragility of the bush and her message is still relevant today. ‘Humans, please be kind to all bush creatures and don’t pull flowers up by the roots.’

May Gibbs wrote in 1925 about herself ‘I have so loved drawing and colour and am so enraptured with the art of word-painting that each person I know is a character in a book, and everything I see is a drawing or a painting … England sounds sweeter than the name of any other country; but if you scratch me a strong scent of eucalyptus will fill the air’.

Only when I came back to her did I realize what a fantastic, richly original, delightfully reckless place Australia is. 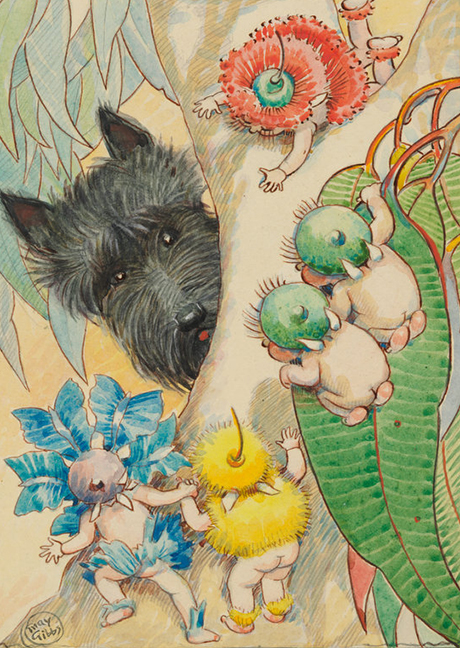 The bush immediately became a new fairyland,  and I saw ‘Snugglepot’ and ‘Cuddlepie,’ the Banksia men, the Flower Babies, the Tree-Woggs, and the Rock-bocks, and all other creatures to whom I could only do justice in three colours and, by spending  far more time on their portraits.

If only there were no telephone with voices in it, calling, calling, always the same words,

‘Are those other drawings ready?’ There it is again, that Voice. I must hurry.’

May Gibbs’s artistic, expressive illustrations and literary works have a lasting worth and a timeless quality that makes them truly classic.

Their universal appeal continues to touch and inspire readers of all ages across the world. They integrate themes and make connections with the Australian bush that translate into May’s vision and unique expression of life, beauty and truth.

Her commitment to conservation and respect and love of the bush is as relevant today as it was 100 years ago. 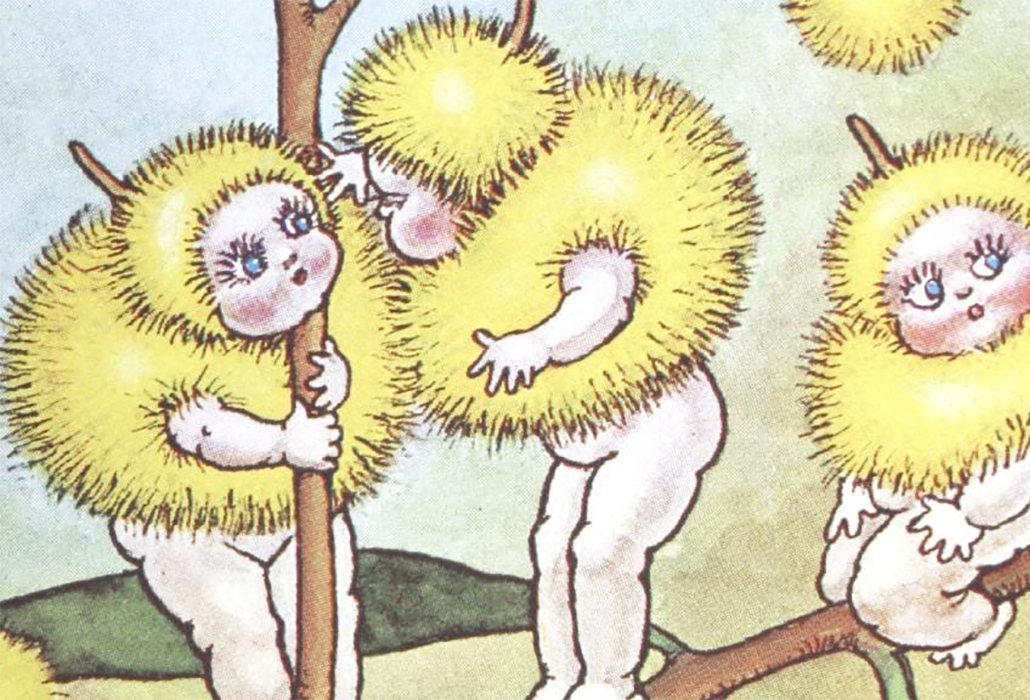 Today her collection of original illustrations, cartoons and literary papers, benefit many children in need, through the copyright holders she left them to; NSW Society for Crippled Children, (now The Northcott Society), and the Spastic Centre of NSW, (now Cerebral Palsy Alliance).

From Anna’s crinolines to the glitz of King Mongkut’s court, Jo Bayley understands why “The King and I”, now on stage at Sydney Opera House, has won many awards