Marvellous music and the Medici International Piano Masterworks Concert programs performed at Brisbane each year go together like peaches and cream. Celebrating its twentieth anniversary in sensational style, Medici Concerts are presenting the creme de la creme of piano talent internationally in 2012. The program will feature four of the best professional pianists in the world today. They are keyboard artists Alexander Gavrylyuk, Behzod Abduraimov, Piers Lane and Eldar Nebolsin, all of whom have splendid international reputations. They will showcase the musical brilliance and masterworks of some of the truly great “classic” composers.

Classic means of renowned excellence. The Ukrainian born award winning Australian pianist Alexander Gavrylyuk, fits the bill like a glove. He has performed the classics in many of the great concert halls of the world, including at New York in 2005. This was when a New York Times critic said of him that he was a ‘world class pianist performing at his absolute best’. A supreme talent, Gavrylyuk was Gold Medal Winner of Israel’s Artur Rubinstein Competition in the same year and critic Lawrence Budman said “From his remarkable playing and artistic insight, it was easy to see what impressed the competition jury.” He won it, the Horowitz and Hamamatsu competitions – all by the age of 20. Since then he has played with the Russian National Orchestra, Israel Philharmonic, Tokyo Symphony, Osaka Philharmonic, Warsaw Philharmonic, Israeli Chamber Orchestra, Kev Philharmonic, Melbourne and Western Australia Symphony and at the Moscow Conservatorium among others. “…such blow-your-socks-off virtuosity is complemented with a dark, intense, ferociously concentrated essence and nature…said Bryce Morrison, Deutsche Gramophone in June 2006

Of all of these exciting challenges the Franz Liszt pieces from Années de pèlerinage should provide some virtuosic fireworks and have many a heart racing. Composed in his maturity, Liszt the most famous technician of his day, aimed to stir emotions deep within the soul. Liszt was reacting to his travels in many new countries at the time of composing his Tarantella and Dante Sonata. He combines history, poetry, drama and harmony all in perfect tune. His lively self-expression and impressions establish a wonderful rapport immediately between the player and the audience. 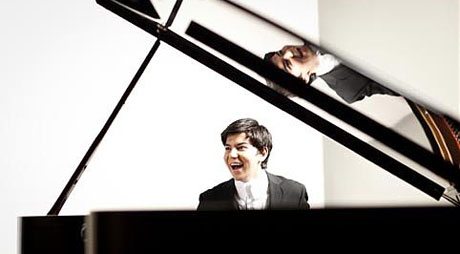 Behzod Abduraimov is from Uzbekistan and winner of the 2009 London International Piano Competition aged 18 years. Since then his career has taken off like a rocket. It includes signing an exclusive recording contract with Decca Classics. The London Daily Telegraph’s critic described his winning performance of Prokofiev’s Third Concerto as the “most enthralling roller-coaster ride … imaginable. Recalling it my knuckles still go white.” Renowned already for his willingness to take on technical challenges such as works composed by Liszt and Saint-Saëns, Abduraimov is a very refined showman. He made his debut when he was only eight with the Uzbek State Symphony Orchestra and has not looked back since. He has toured with the Sydney Symphony Orchestra and given recitals in London, Brussels and Milan, as well as Germany and North America. He will present

Like Gavrylyuk, Abduraimov also loves technical challenges. He will play the completely diabolical Paganini Variations, which should see many sitting on the edge of their seats as he is well up to the task.

Piers Lane almost needs no introduction, he is so well loved and admired at Brisbane town, and in Australia where he regularly performs to sold out seasons. Artistic Director of the Australian Festival of Chamber Music his successful international concert career must certainly keep him on his toes. His is a most wonderful sophisticated maturity of style. His legendary status has been earned through a continuing celebration of Polish composer Chopin, whose works he innately understands and brilliantly interprets. He presents them like rare jewels to be treasured. As well as Chopin he will also perform works by Liszt, the composer seemingly linking this series together. He will present

The Debussy gems are a homage to the French composer, who developed a musical language of his own. A central figure of European music at the turn of the 20th century Debussy also enjoyed celebrating ‘conversations at the piano’ with Ernest Guiraud his teacher. The piano language of Piers Lane, like Debussy’s, is most eloquently spoken

Eldar Nebolsin will close the 2012 series in November.

Known to ‘caress the keys’, Nebolsin has appeared with leading orchestras around the world and has collaborated also with some of the world’s most renowned chamber musicians. His program includes In an interview with Naxos he revealed that his love for passionate, magical Romantic music began when he was very young.  Its constant colour and emotion touched his heart and stirred his desire to play.

Expressing his thoughts and feelings as his fingers fly across the keyboard, the reality of his performances are that he is able to explore the exquisite harmonic dimensions of what is a sublime realm of music.

His choice of Schubert’s Fantasia to end the program will provide a memorable finish to a wonderful series of amazing music presented by great musicians.

The four movements are played through without a break from fanfare to finale. This was one of the pieces of music composer Franz Liszt most admired, and he transcribed it for piano and orchestra and two pianos.

Schubert was a musician’s musician. In 1905 Duncan Edmondstoune in his publication about the life of Schubert remarked that Schubert himself had said about his Fantasia that “the devil may play it“, referencing his own inability to do so properly. Ann Thompson OAM, Director of Medici Concerts has worked tirelessly to bring this splendid program to fruition. She is celebrating twenty years of providing wonderful musical experiences to thousands of people.

This is a recital series for all those who love the beauty and challenges provided by great composers for great musicians. It is also for all those seeking to know and understand just how much they have contributed to the social and cultural growth of many nations. Today fine classical music such as this is treasured by millions in both western and eastern cultures. It is not just about the notes or the playing,  which do matter, but also the harmony they can provide.

Great concert series like these provide a continual opportunity to bring together many different people from all walks of life and all backgrounds. They celebrate and encourage communication and intercultural conversations and also help contemporary citizens to better understand the nature of cultural difference; to grow an appreciation and respect for many cultures, so that we can all learn how to better deal with our differences and with each other.

Bravo Ann, what a fabulous anniversary series you have put together – it has been very well done and deserves to be sold out.

It was in 1762 that James Christie established himself, and successive members of his family, as an auctioneer in Pall Mall at London. By the time this portrait was painted in 1778 he had moved to commercial premises adjacent to the painter Thomas Gainsborough’s residence where this portrait was rendered…