Music is something we all enjoy. It is a powerful force; one that links each and every culture on earth…all has musical traditions.

The 2016 International Piano Masterworks Series, music making of the highest calibre, is presented by Ann Thompson of Medici Concerts in Brisbane. It will commence its season of four virtuoso piano events in the Concert Hall at QPAC starting 22nd May 2016 at 3pm.

This series in the classical tradition has an underlying theme in that all the solo pianists will present works by Poland’s famed composer Frédéric Chopin (1810-1849), allowing us to encounter the maturing of the composer’s technique.

Chopin’s was an abundant style, one that flourished through his fingers. There is a scene in the movie Impromptu (1991), which says it all, providing an insight into his marvellous music and output during his tumultuous love affair with novelist George Sand who was enamoured and captivated by the brilliance of his music making.

Australian actor Judy Davis featuring as George Sand lies down on the floor under the piano to admire Chopin’s playing as closely as possible, As a young émigré in Paris, Frédéric Chopin thrilled his audiences in the Salons.

Very soon he became a much sought after piano performer and teacher.

With strong technical command, stylish shaping of phrase, poise and grandeur, Pier’s Lane is renowned for playing the works of Frédéric Chopin.

His Chopin by Candlelight program on May 22nd, 2016 in the Concert Hall of QPAC will evoke the atmosphere of a candlelit salon at Paris.

Chopin’s Nocturnes are ‘hauntingly beautiful’ and would have pleased his many followers then as they do now. Over the years Chopin’s remarkable transformation affected the texture, growing harmonic richness and profound personal expression of his music.

This ensured his mature work and his youthful compositions would end up as a body of work planets apart, reflecting his steady artistic growth and ongoing spiritual refinement.

Ethereal melancholy, compelling originality with fireworks and exaltations, Chopin took his musical world by storm, with the poetry of his pianism and sound.

Multi-coloured harmony, enchanting melody all of these were only some of the characteristics of his music, which exuded romance that was highly original, with only a ‘few ancestors’.

Much admired pianist Alexander Gavrylyuk, who has won first prize at many of the world’s top international piano competitions will present works by Franz Schubert (1797-1828) and Frédéric Chopin, as well as the drama of the fiery Russians, Sergey Prokofiev (1891-1953), Sergey Rachmaninov (1873-1943) and Mily Balakirev (1837-1910).

Gavryluk studied music in Australia for a number of years before moving in 2006 to Berlin where he has established a brilliant career with the world’s top orchestras and conductors including Valery Gergiev. He will commence his concert at the Conservatorium Theatre in Southbank with Franz Schubert’s Sonata in A Major D 664, which releases its emotions within bounds and while it has drama at its core, offers a view of his gentle lyrical spirit.

On the other hand the Oriental Fantasy by Mily Balakirev for the finale, is a superbly colourful imaginative and virtuosic showpiece from a complex character, one that moved within and without musical life, often in great torment. Freddy Kempf plays to sell out audiences all over the world and his program has been chosen for dramatic impact. He will play Chopin’s Polonaise in C minor, Op 40 No 2 believed to have been composed in the dark atmosphere of a monastery and considered a symbol of Polish tragedy.

During the September 1939 German invasion of Poland at the outset of World War II the Polskie radio broadcast this piece daily as s nationalistic protest. They wanted to rally the Polish people to survive. It is dark, dramatic, powerful and uplifting piece in many ways and will be followed by the ‘tragic’ Polonaise in F sharp minor, Op 44 and the Sonata No 3 in B minor, Op 58 with the finale, the Grand Sonata in G major, Op 37 by the great Russian composer Pyotr Illyich Tchaikovsky.

His open-hearted melodies, impressive harmonies, and colourful, picturesque orchestration never fail to evoke a profound emotional response from audiences the world over. London based Queensland born award-winning pianist Jayson Gillham convincingly winning the Australian National Piano Award at Shepparton, Victoria in October 2008. Since then he has gained an international reputation for redefining the classics and introducing them, with contemporary works destined to become classical, to a whole new age. 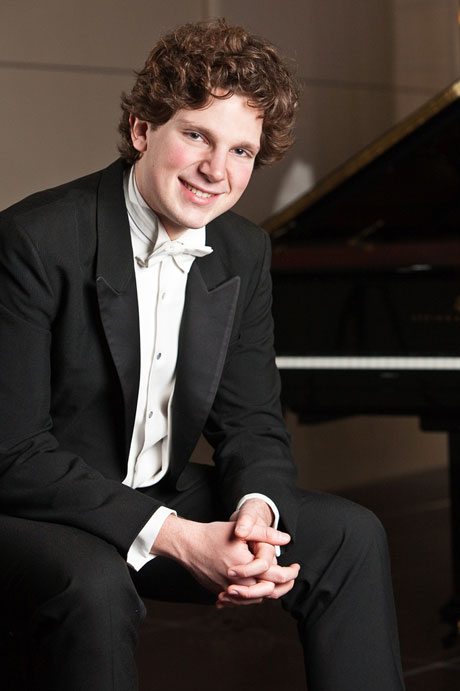 His diverse program is designed to showcase his brilliance and virtuosity, beginning with the Toccata in C minor, BWV 911 by Johann Sebastian Bach (1685-1750) the most celebrated member of a musical family of northern German musicians.

The Chaconne in G, HWV 435 by German born London based composer Georg Friedrich Händel (1685 – 1759) is a fine example of the masterly use of the format of the dance as a variation form for keyboard.

Fiery and fabulous, it is characterized by harmonic progression.

The Sonata No 21 in C major, Op 53 ‘Waldstein’ completed in 1804 by Ludwig van Beethoven (1770-1827) is undoubtedly the most technically challenging composition. Named for the Count who was a patron and friend, it is also known as L’Aurora (The Dawn) in Italian its opening chords offering an image of daybreak.

Funérailles, number seven in a suite of ten pieces is by Chopin’s friend the Hungarian Franz Liszt (1811-1886) and dedicated to Princess Sayn-Wittgenstein who remarked that, “Liszt has flung his spear far into the future.” This work was as indicated by Liszt, ‘an elegy written as a tribute to three of his friends who died in the failed Hungarian revolution. Jayson Gillham will end his concert with a grand finale of works by Frederic Chopin, his Berceuse in D flat major, Op 57, the delightful and joyous Impromptu No 3 in G flat major, followed by the Op 51, the Grande valse brillante in E flat major, Op 18 and his Polonaise in A flat major, Op 53 ‘Heroic which invokes images of patriotism, nationalism and the call to arms.

The Heroic is an ‘evocation of past splendour and a symbol of Poland, a true agent of cultural nationalism’. Works such as this would become a model for composers who came after in defining national style.

Classical music impresario Ann Thompson OAM founded the Medici Concerts Piano Series in 1993 to restore the art of the solo piano recital and give Brisbane music lovers the opportunity to hear some of the world’s greatest pianists.

The name Medici Concerts commemorates the d’Medici family, the family dynasty who ruled Florence for 300 years and patronised many artists. Music as glorious as this provides us all with the power to effect both intellectual and creative development and enjoying its many facets helps us to enjoy good health and well-being.

The Frick Collection will offer an exhibition from May 2017 surrounding an illuminating work by Dutch master Rembrandt van Rijn, Abraham Entertaining the Angels