Medieval Moderns: The Pre-Raphaelite Brotherhood at the NGV International will showcase for the first time in forty years the whole of their acclaimed collection from 11 April – 12 July 2015. Entry will be FREE.

More than 100 luminous paintings, prints, decorative arts, furniture, book designs and stained-glass windows by the Pre-Raphaelite Brotherhood and their associates are included.

‘The NGV’s holdings of works by the Pre-Raphaelite Brotherhood are world-renowned and form the largest collection in the Southern Hemisphere,” said Tony Ellwood, Director.

The NGV “…has consistently collected Pre-Raphaelite Brotherhood works since the 1880s – the most recent acquired last year”. Tony Ellwood said.

A portrait of the accomplished novelist the exotic and mysterious Baronne Deslandes (1866-1929) by Edward Burne-Jones will be showcased alongside an exquisite stained-glass window designed by Burne-Jones, which is like others can be found in Melbourne and Adelaide.

Alongside these works will be photographs by Julia Margaret Cameron and her contemporaries who were working at the same time as the Pre-Raphaelites.

They were pioneering highly skilled photographers creating stylish portraits and atmospheric landscapes, which imitated the formal language of the Pre-Raphaelites.

It was after 1848 that the Pre-Raphaelite Brotherhood through their works sought to transmit a message of artistic renewal and moral reform.

They reveal the freshness and vitality of the visionary vanity of the half a dozen or so avant-garde boys who eventually became involved. They all shared in common a total disregard for the academic ideals of beauty.

Instead they championed uncompromising realism.

During the late nineteenth century in England beautiful imagery was hard to find in a world bent on the technical aspects of industrialisation.

Those leading the creative impetus in London, included art patron and critic John Ruskin (1819-1900) whose personal ideals led to admiration of an aesthetic of individualism.

He championed the Brotherhood’s ideas of painting directly from nature admiring their dedication to working ‘en plein air’ and for taking pride in accuracy and minute detail, particularly in relation to botanical accuracy.

From day one of their time together the Pre-Raphaelite group were never without patrons, including art critic and patron John Ruskin. Like other dedicated followers he contributed to them all producing stunning significant works.

Architect, designer Auguste Welby Pugin [1812-52] believed that a decline in art was apart from the industrial revolution, was also the result of spiritual decline.

He fashioned the revival of the Medieval Gothic, preaching his True Principles of Pointed or Christian Architecture published in 1841.

Designer, social activist and spiritual leader William Morris was another member for a short while who was advocating the desirability of the ‘Arts and Crafts Home by admiring the virtues attached to the ideas surrounding the hearth and home.

When combined with Spartan design he projected an image for that of a return to simplified, honest forms always using natural materials.

Morris endorsed the ideas of Ruskin and his choice of living a medieval craftsman’s lifestyle as the best means by which to implement social change. Simple design and honest labour would become a shield against worker exploitation.

He set out to prove the high standards of the past could be repeated – even surpassed – in the present. Morris wanted everyone to experience work as a creative and joyous expression of one’s daily existence. 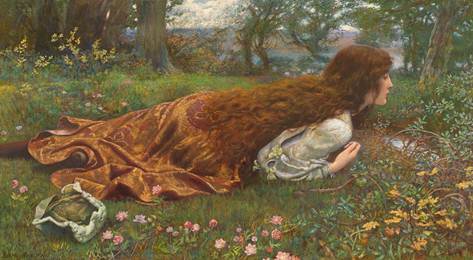 They both thought in terms of a return to the Middle Ages in England when their romantic view of that time when it was perceived life was much simpler, helped to inspire change.

A group of youthful desperate romantics, the Pre Raphealite Brotherhood and their followers shared a common loathing for the stale imitators of artists prior to Italian Renaissance artist Raphael (Raffaello Santi da Urbino 1483-1520)

They did this by introducing minute detailing, poetic symbolism, sharp lighting techniques and mystical romanticism back into the world of art they revived the emotive directness of much admired works from the late 15th century. This was the period when philosophical giants such as Sir Thomas More (1478-1535) and Desiderius Erasmus (1486-1536) actively pursued ideas of philosophy in Europe from the middle of the 14th century to the beginning of the 17th century in Europe.

They emphasized the ‘value’ of human beings, both individually and collectively, with an emphasis on ‘human nature’.

Raphael was working at a time when educated men and woman had begun questioning the world around them and their place within it.

He became renowned for his large figure compositions as well as his decorative work, which he produced with clarity of form and ease of composition, admired greatly for its ability to project human grandeur.

The Pre-Raphaelites expressed their admiration for what they saw as the direct and uncomplicated depiction of nature, earnestly seeking to emulate the art up until the time of Raphael, reflecting subject matter of a noble, religious, or moralizing nature.

They were clearly affected by other ideas of their time including those espoused by their colleague social activist, designer, architect and craft champion William Morris who championed the ideas, images and lifestyle of England’s golden age prior to industrialization all the way through to the mid 1880’s. Vital, fresh, inspiring and viewing religious themes in a realistic fashion the Pre-Raphaelite Brother garnered both followers and critics alike in their five short years of life as a group, whose influence on the development of the fine and decorative arts as well as society was profound. Medieval Moderns will be accompanied by the first publication on the Pre-Raphaelite Brotherhood to be published by the NGV since 1978.

A series of public programs and events will complement the exhibition, including a lecture series and free afternoon of talks on Sunday 12 April with curators and experts.

Melbourne dealer Jamie Allpress has been in the trade since he was 11 years old and will showcase fine antiques and art at Sydney’s AA&ADA Antiques Fair, 2014