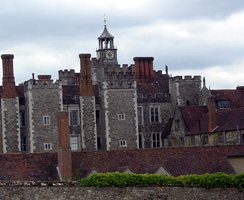 Poet, novelist and celebrated gardening writer Vita Sackville West (1892-1962) was born at Knole in Kent, considered by many one of the greatest of all the country seats of England. She wrote ‘there is nothing quite like the English country house anywhere else in the world. France has her chateaux, Italy her villas but the exact equivalent of what we mean by the English country house is not to be found elsewhere’. It may be large, it may be small, it may be palatial, it may be manorial, it may be of stone, brick, stucco or even of beams and plaster; it may be the seat of the aristocracy or the home of the gentry – whatever it is, it will not be found elsewhere’. Knole House in Kent resembles an early medieval village or small town with its acres of architectural jumble forming a homogenous whole.

Items sold at Sydney Antiques Fair 21 – 25 August 2013 will be vetted for authenticity and backed by member dealers of the AA&ADA. Win Your Free Pass to Attend