Australia, by world standards, is a young western democracy colonized by the English at the edge of Asia in the days of so-called eighteenth century European enlightenment. We are an emotive nation, wearing our heart on our sleeves while we admire, embrace and embolden those who train and try hard, compete well without cheating and win on their merits; whether they are trying to cross the line and win the X Factor, in a football team, a cricket team, or even if they are a jockey or a horse.

Blood horses arrived with the First Fleet in 1788, four mares, a stallion, a colt and a filly were landed at Port Jackson. They were meant to strengthen and expand the stock of horses working hard for their English overlords. Hector an Arabian horse was imported to Australia c1803 and the stallion Northumberland was imported from England in 1802, both contributing to the ‘breeding up’ of the local blood horse population.

By 1810 there were over 200 horses and during the 19th century when the horse population reached its peak, there was nearly one horse for every two people in Australia.

Horse racing was one of the first organized activities, becoming enormously popular with everyone and integrating the so-called ‘sport of kings’ into our society and culture.

But once a year at Flemington
A horse race stops us all
And we hold our breaths and listen
To the commentator’s call
For never has there been a race
That holds such fascination
Than the race they run at Flemington,
The Race that stops the nation*

Today our horse racing carnivals attract horses and owners to come here from all around the globe to invest in our flat racing scene and enjoy the outing.

They come to compete in the Emirates sponsored Melbourne Cup, which is run on the first Tuesday in November,  as well as other associated richly reward races on the spring and autumn racing calendars in both Sydney and Melbourne. 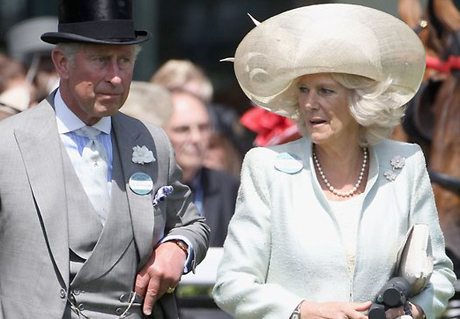 The Victoria Racing Club’s main horse race of the year the Melbourne Cup is the main focus. It has over the 150+ years since it was established, become a celebration integral to our nation’s health and happiness, honouring the good life we all live in Australia. Many overseas horses are successful so they are always in with a ‘good chance’.

Today in Australia horse racing is not associated with an inherited aristocracy as it is in England, it is more about those who succeed in life based on their own merits and work ethic and embraces those who have attained ‘celebrity’ status.

If royalty want to come too that’s ok, they will be given a very warm welcome, because in true 18th century English enlightened fashion, we Australians do love a ‘great gaze’. Movie stars, television stars and fashion celebrities are also welcome to attend and it is true that they add a great deal of ‘glamour’ and colour to the local Melbourne Cup Carnival scene.

They hang out in designer tents where the champagne flows and canapés are coveted, while everyone indulges in a bit of star-gazing and wishful thinking.

Giving everyone a ‘fair go’ has become an important aspect of the Australian psyche.

Early English settlers believed giving everyone an even chance was an ideal to strive for when establishing a new way of life for themselves and their families in this great southern land down under.

The idea that if you worked hard you would reap the rewards also played out well on the racing scene.

Melbourne Cup day is the day where all around our nation in offices, in shops, in country towns, on outback stations or in pubs everywhere, everyone has a flutter or takes a sweep.

Each year as the race approaches the stories about the owners, the horses, the trainers and the jockeys capture our attention and hearts with their stories, ensuring we gather around and lend our support while we all have a jolly good time.

On the day ‘the race that stops the nation’ is run everyone wants to say they have backed the winner. At Melbourne where I live, the day itself is a public holiday, the only place in Australia where that happens.

If you are not able to attend Flemington racecourse you book into a restaurant or a local club or pub, where they all have television screens so that you watch the cup with the rest of the crowd and celebrate the ‘lucky country we live in and love. One of the most important aspects of living in Australian in its early days would be to establish various forms of sport, entertainment and gambling, which all became integral to our way of life.

Right from day the sports we championed were mostly inherited from England.

During the twenty years between 1810 and the arrival of Governor Lachlan Macquarie and his wife Elizabeth in 1830, Australia’s main coastal settlements Sydney, Brisbane and Melbourne changed vastly in wealth and attitude, as well as its fashions and passions.

The Macquarie’s brought ‘culture to the colonies’.

They approved of the production of elegant houses designed in the English Georgian and Gothic taste and this ideal spread to each of the other capital cities. They also encouraged establishment of the first official horse race meeting.

Duly organized by officers of Governor Macquarie’s visiting 73rd Regiment, the first race horse meeting was held in Hyde Park, Sydney, which was named for its English counterpart. The races took place there until 1833, when Governor Bourke designated a large tract of land in the eastern suburb of Randwick for use as Australia’s first racecourse.

It was known as the ‘Sandy Course’ and from 1860 became the home of racing in NSW. Out in the bush racing quickly become a popular style of sporting entertainment for the local populations as gradually towns grew up all over the country. Some of these still survive and thrive today.

In the state of Victoria the first race meeting was held in 1838 and its ‘Melbourne Racecourse was established in 1840, although now known as Flemington Racecourse, it didn’t become official until 1871 when The Victoria Racing Club was made its trustee. As the colonies of Melbourne and Sydney grew in status society sorted itself into spheres of influence. Those who had the ready necessary were all involved. 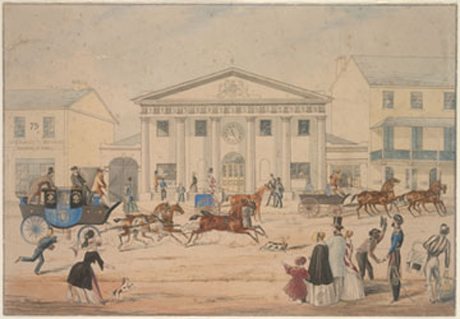 The racetrack was a place where high society could parade; part of a tradition that came out of England and the ‘park promenade’ established by Charles II following his restoration.

In Australia horse racing became a favourite pastime of ‘everyman’ and having a ‘flutter on a horse’ from the early days of the colony, an aspect of life

After all everyman owed a great deal to the horse, especially when they played such a huge part in the discovery of gold, which changed the nation and allowed punters yet another chance of taking home a prize.

The Gold Rush really began in February 1851 in NSW and in Victoria some six months later when discoveries at Bendigo and Ballarat proved transforming. 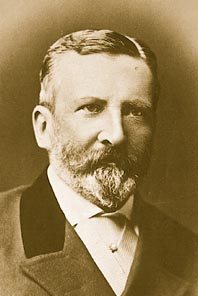 In just two years the population of Victoria alone grew from 77,000 to 540,000. The rush attracted British settlers in droves, as well as Americans, French, Italian, German, Polish and Hungarian exiles. Chinese immigrants made up 3.3 per cent of the Australian population by 1861.

As well as being hard workers, the Chinese were experienced at, and had a love of gambling that went back thousands of years.

Boosted by wealth from the goldfields the Chinese assisted gambling in Australia to flourish.

They didn’t care what status you held in society you just had to have the ready cash. No one was excluded and there was no limit on what you could bet from a penny to a pound.

The man credited with establishing a horse race and calling it the Melbourne Cup was English born Melbourne based and one very colourful character, Captain Frederick Charles Standish (1824-1883) whose father Charles was one-time companion of the Prince Regent.

‘No backer of horses was better known or more liked upon English racecourses’ than Frederick his son.

Despite his popularity Frederick Standish’s money losses were heavy. In 1852 he left England for the colonies where he worked on the gold diggings in various parts of Victoria until 1854 when he became assistant Commissioner of Police for the Goldfields at Sandhurst, later Bendigo, and the Chinese Protector and Chief Commissioner of Police Victoria from 1858. Chairman of the committee of The Victoria Racing Club from 1881 – 1883 he owned racehorses himself. He kept a diary, which reveals his ‘aimless pursuit of pleasure’ and he was known for his free and easy manner, indolence and love of food and the theatre.

‘Although there is no evidence to support the legend that Standish suspended the hunt for the Ned Kelly gang when the weights for the Melbourne Cup were declared, his conduct of the police operations was, according to the 1881 royal commission on the police, ‘not characterized either by good judgment, or by that zeal for the interests of the public service, which should have distinguished an officer in his position’.*

This horse race that stops a Nation in its tracks is about Australia’s fascination with the Melbourne Cup and has been evolving since the champion horse Archer won the first two races in 1861 and 1862. 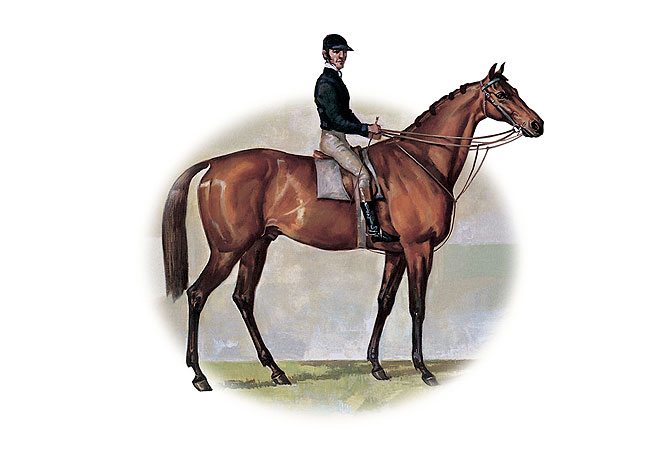 The story about the horse walking from Nowra to Melbourne with his faithful strapper by his side to compete in the race is now considered apocryphal, although for a long time its romantic connotations certainly helped to grow the popularity of the race.

An annual event, the Emirates sponsored 2 mile (3200 metre) race the Melbourne Cup is the richest handicap race in the world and the focus of the VRC Melbourne Cup Carnival, enabling the city of Melbourne to endeavour to outperform its east coast rival Sydney, in both the Spring fashionable and thoroughbred stakes.

So far it seems to be way out in front and staying well. 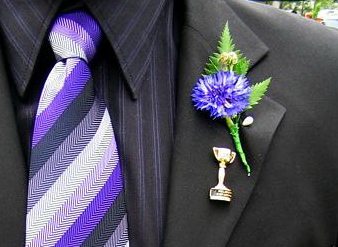 For down the years it’s history,
How losers come and go -
And horses who with bursting hearts
Can make the legends grow
The memories of champions
Will always linger on -
Immortalised forever by
The race at Flemington!*

*The Race that Stops The Nation – A Poem for All Australians

With thanks to Destination NSW, the lead government agency for the New South Wales (NSW) tourism and major events sector. They have two key consumer websites – Sydney.com and Visitnsw.com.

Australian born Dr. Michael Brand has an international reputation in the arts world and as the new director of the AGNSW announced his 2013 1st program of shows