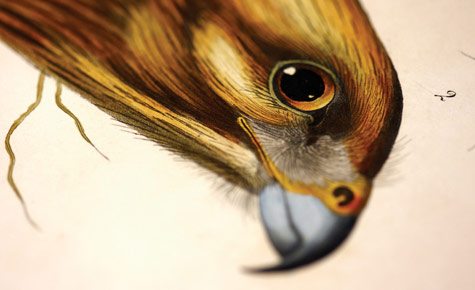 What we know about other species and those that didn’t make it to hop, fly, slither, swim or walk into the 21st century began with the work of scientific illustrators. Travelling to the far corners of the Earth as part of exploratory forces they braved the discomfort and danger of searching for the new world to document its flora and fauna, arriving home (if, indeed they did) with drawings remarkable in their detail and anatomical correctness.

Alternatively, illustrators worked from specimens (sometimes live, mostly dried skins) delivered to them by explorers or their wealthy patrons who wanted the unique plants and creatures of the new world documented for their information and amusement.

It celebrates the work of scientific illustrators, who combined artistic skill with an accomplished eye for scientific observation.

The exhibition displays the best of the museum’s collection of natural history artworks: rare books from the 18th and 19th centuries, field sketches from early colonial exploration of Australia’s wildlife, and contemporary photographic records – a hugely informative entertaining show.

For the last 150 years Museum Victoria has engaged scientific illustrators to record the disparity of species of the natural world.

These illustrations form a bridge between art and science; a bridge that is central to scientific research.

The exhibits have been carefully selected to show the history and technical evolution of scientific art illustration of the natural world.

It begins with the display of a volume of Albertus Seba’s Thesaurus, on show from the Museum’s Natural History collection – a rare beautiful exhibit. Albertus Seba (1665-1736), a Dutch pharmacist, zoologist and collector moved to Amsterdam and around 1700, opened a pharmacy by the harbour. Seba asked sailors and ship surgeons to bring exotic plants and animal products he could use for preparing drugs. Seba also started to collect snakes, birds, insects, shells and lizards in his house. He developed a collection of natural specimens and in 1734 published a Thesaurus of animal specimens with splendid engravings.

Carl Von Linnaeus (1707-1778), was a Swedish botanist, physician, and zoologist who laid the foundations for modern scientific species classification. In 1735 Linnaeus visited Seba twice – Seba’s collection and Thesaurus became the basis on which he began the development of his classification system.

They remain so today.

A favourite from the exhibition is John Gould’s Kea from his Birds of Australia series – a hand coloured lithograph on paper, the lifelike depiction, delicacy of line and soft hued background, sublime in execution. Fish Hawk by Audubon another grand thrilling exhibit.

Audubon and Gould’s sumptuous works do not overshadow the work of illustrators who on a smaller scale perhaps, recorded wildlife in the Australian colonies of the nineteenth century. Inaugural Professor of Natural Science at the University of Melbourne and the director of the National Museum of Victoria from 1856, Frederick Mc Coy aimed to publish a natural history of Victoria: Prodromus of the zoology of Victoria; figures and descriptions of the living species of all classes of the Victorian indigenous animals.

Mc Coy’s project began in 1858 and continued for almost four decades. He engaged the best artists in the colony, among them Arthur Bartholomew.

Pages from the Prodomus are on display in the exhibition and while the publication took a long time to come to fruition and was expensive both financially and professionally for those involved, it was critically acclaimed and is acknowledged today as one of the Melbourne Museum’s finest publications.

Research into Australia’s long-extinct species has demanded new illustration techniques. Palorchestes was a large marsupial that browsed on shrubs. The first fossils discovered were thought to be those of a giant kangaroo, but it became clear that the bones discovered belonged to an animal quite different from any living creature.

Palaeo–illustrator Peter Trusler, reconstructed the head of Palorchestes from extensive research. On display in the exhibition, the result, Palorchestes Azael, skull, (alkyd oil on gesso over paper) is quite extraordinary.

Composing an image of the skull from several angles, Trusler drew versions with muscle tissue, eyes, lips and nose to create a complete picture of this intriguing animal. The effect is amazing; akin to a sculptural piece copied from specimens found at an ancient burial ground. 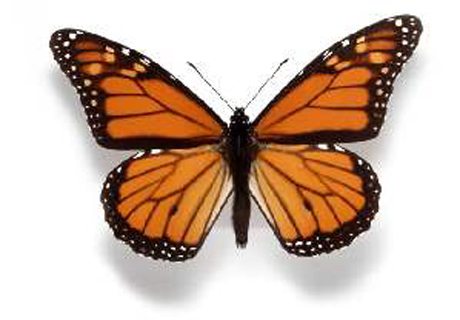 Contemporary museum practice has embraced digitalisation of images and there is a delightful hands or fingers on display panel which allows at the touch of an image of a butterfly’s egg to see the egg morph into a fully developed butterfly.

This digitalised exhibit, Butterflies of Victoria, which makes use of digital macro photography techniques, is the combined work of Ross Field, Simon Hinkley and Ken Walker.

To whet your appetite for the exhibition this informative great fun butterfly panel can be viewed from the Museum’s website.

Ross Field is an honorary associate of the museum and an entomologist dedicated to documenting each life stage of every Victorian butterfly species.

His passion has taken him to the top of many hills, along riverbanks and through parklands in pursuit of female butterflies as they lay their eggs. Simon Hinkley’s extreme close-up photographs of Ross’s egg collection are just a small fraction of the images that have been captured for his exhaustive guide to our butterflies.

It also documents its ongoing commitment to preservation, scientific research and engagement of illustrators to record the diversity of the world’s eco systems.

Vital aids to past and present scientific research, I have barely touched on the exhibits to see and wonder at in The Art of Science exhibition – artistry that has evolved from the early days of pencil and paper to the sophisticated techniques of the 21st century to document creatures of the natural world.

Great show, take the family… a must see.

Ref: Some of the above was drawn from the excellent notes to be found on the Melbourne Museum’s website pertaining to The Art of Science exhibition.

A Life Fellow of the RSA at London, I enjoy Adam Lent’s idea of standing shoulder to shoulder at a barricade shouting “Liberté! Fraternité! Egalité! Créativité!