Melbourne NOW is the largest exhibition ever undertaken by the National Gallery of Victoria (NGV).  The project, which brings together over 400 artists and creative practitioners is an exploration into the creative undertakings of the city’s artists, designers and architects who live and work in its midst. It has assembled the latest in art, design, architecture, fashion, performance and creative practice to reflect upon Melbourne’s unique and rich cultural landscape. 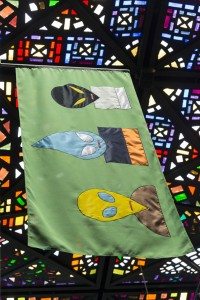 The project, On Top of the World: Flags for Melbourne, is a part of this brilliant Summer Show currently being held at the NGV. This public art project extends the Melbourne Now show out into the city at large, through the flying of artist-designed flags on flagpoles across Melbourne, with a concurrent display in the NGV International’s Great Hall on St Kilda Road. The project has been curated by Stewart Russell of Spacecraft Studios, who asks us all to consider the symbolic, semantic and decorative potential of flags. In all 41 flags have been quietly unfurled at sites all over the city of Melbourne, including the Town Hall, Manchester Unity Building and Royal Botanic Gardens. An enormous 15 metre wide flag shouting SALE (with the word scribbled out) is flying at the Haymarket roundabout.

Jon Campbell’s ‘four letter words’ are also flying high on working cranes with the words LOVE, SING and YEAH. John Warwicker placed his re-imagined Australian flag atop the Royal Exhibition Buildings, acknowledging the indigenous ground and its people’s relationship to the land. Three flags with WHO, ARE and YOU were placed atop Flinders Street Station. As part of the project the CFMEU (Construction, Forestry, Mining and Energy Union) workers and volunteers from the NGV will march the flags along Swanston Street to each other’s institution. The marches will take place at 12 noon Sun 26 January, 12 noon Thu 6 February and 12 noon Thu 13 March. Another great initiative from the NGV team of creative people, who are all contributing so well to the ongoing development and growth of arts and culture in Victoria. 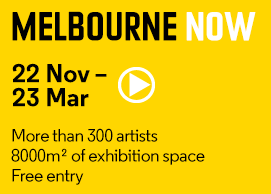 For  more information connect to the Melbourne NOW website.

The story of Marco Polo is epic in scope and scale and Season 1 of the Netflix ten part television series, with Lorenzo Richelmy as Marco, has had mixed reviews