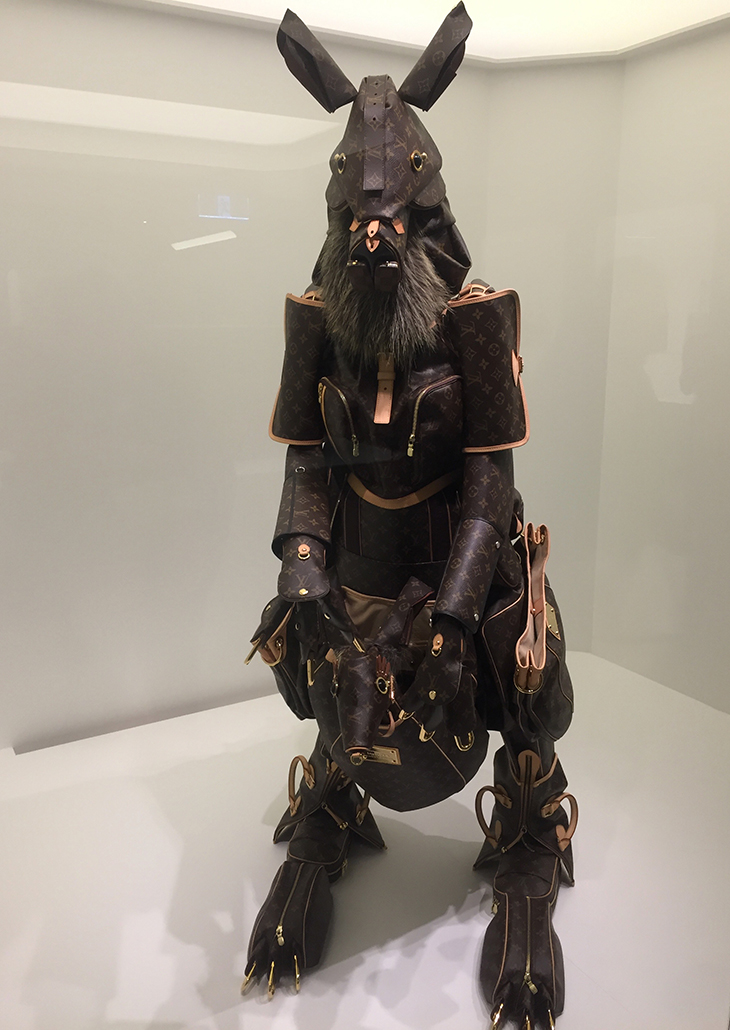 Entirely made from Louis Vuitton products, this representation of a LV kangaroo had many cameras snapping wildly!

The business of fashion and its history is big business and it is important to tell the story to the next generation of shoppers, so traditions, innovation and creativity continue to thrive. The Time Capsule Exhibition of Louis Vuitton is currently wowing shoppers until March 21, 2018 at the Fashion Capital, Chadstone, Australia’s largest retail shopping mall. 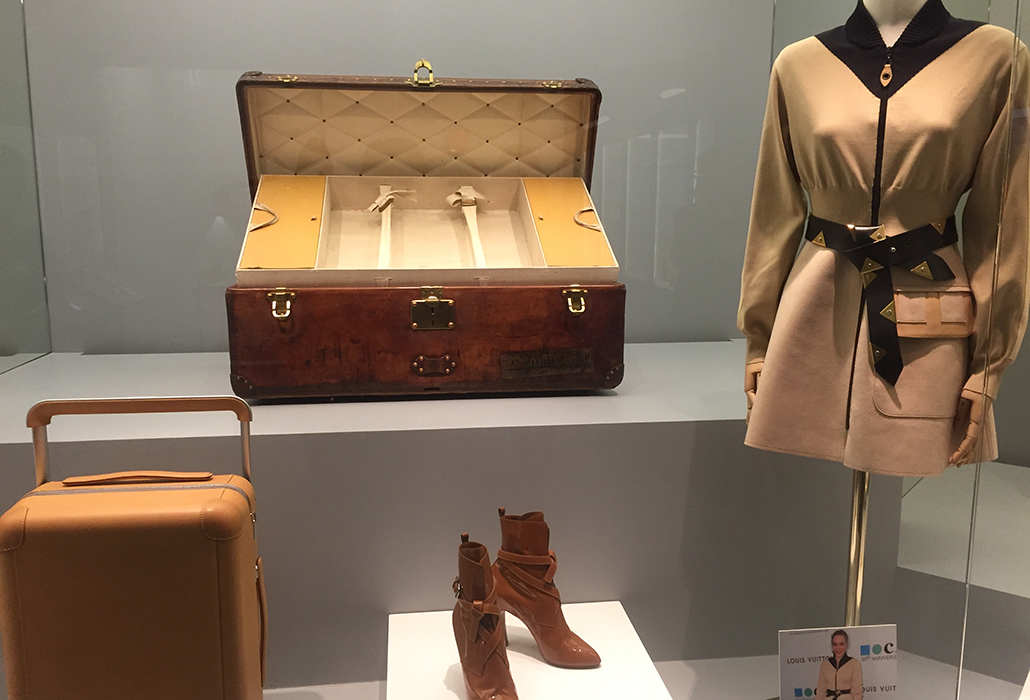 Trunk, shoes an jacket all have LV style straps

Selected from the Louis Vuitton archives, an array of interesting objects celebrate the past and present of the famous fashion house and the French Connection that remains strong with Australia and in particular, Victoria.

So many people in Australia still don’t know or understand Victoria has a French past… indeed, it was called Terre Napoleon first. 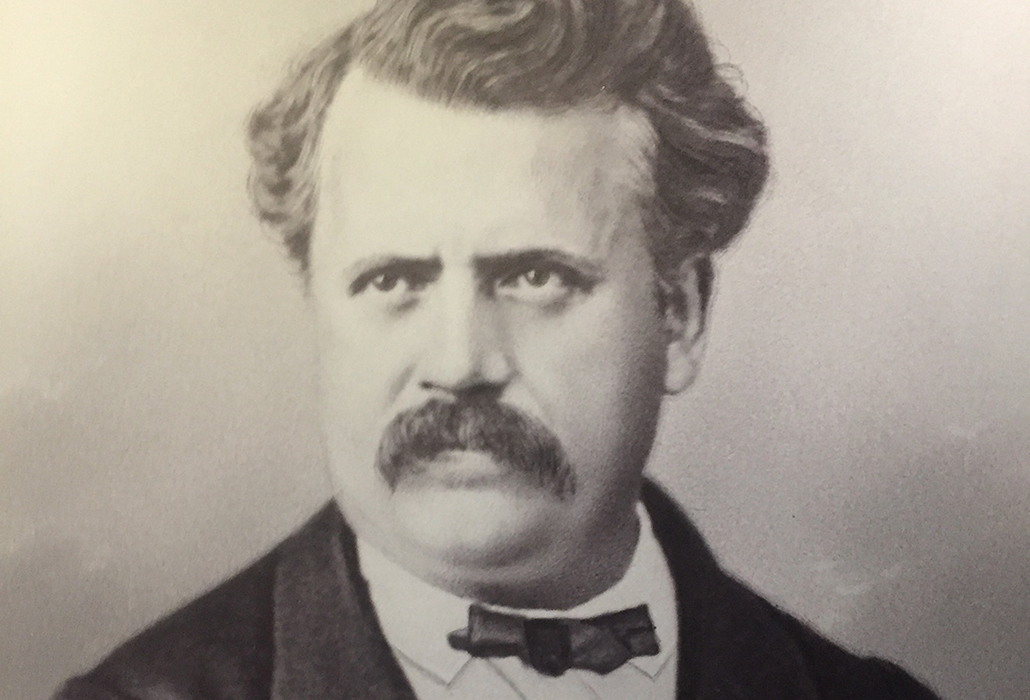 Louis Vuitton Malletier (1821-1892) a French box maker and packer, founded his fashion house at Paris in 1854 as the burgeoning bourgeouise getting richer by the minute with the industrial revolution in full swing, began taking up the whole idea of travelling well and bringing back home items not readily available elsewhere, at least at the time.

Its history consists of controversy and disputes, which makes for fascinating reading if you are so inclined, as it is one of the brands most copied in the world from the outset.

It was all about innovation and determination that when combined with the skill to create, attracts the elite in society. 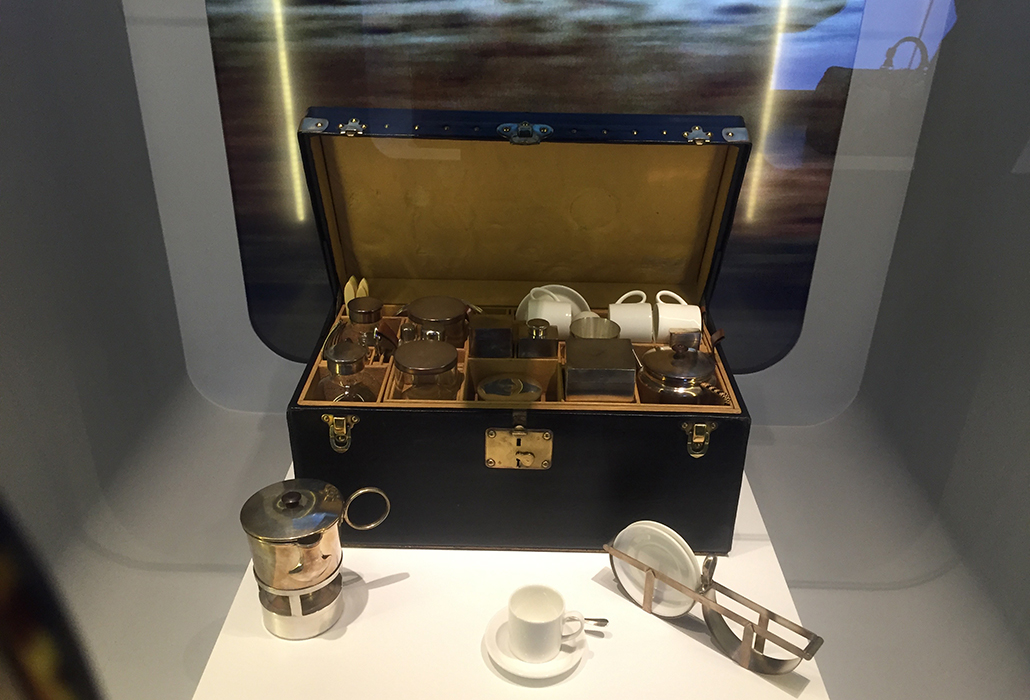 LV started with a special trunk, one that was lightweight and airtight and had the ability to stack with ease on voyages across the Atlantic. Right from the beginning others were anxious to copy his ‘look’ and so he kept changing until he was able to register his trademark “marque L. Vuitton depose”.

When he died in 1892 it was his son Georges Vuitton who began to put in place his vision for a global market and by 1913 it was the largest travel goods store in the world at the time, with the LV monogram appearing on most of its products.

It has been named the world’s most valuable luxury brand or many years, beating such other high profile. labels as Hermes and Rolex. 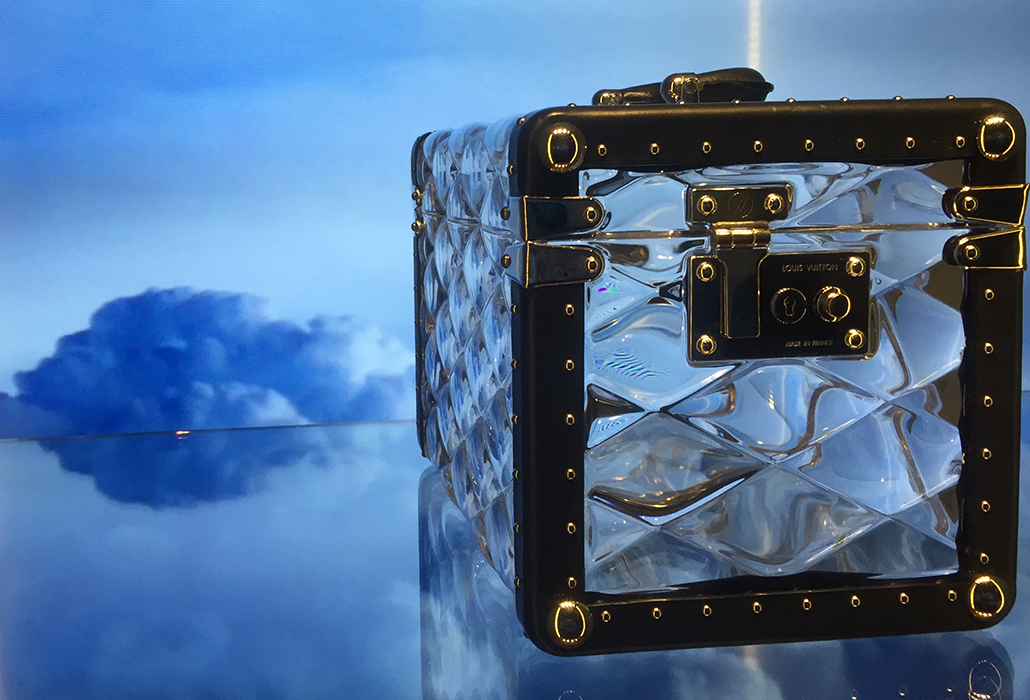 Today their selection ranges from handmade trunks and leather goods to ready-to-wear, shoes, watches, jewelry, accessories, sunglasses and books. The exhibition offers a view of items from its early beginnings to the present day where the LV monogram is well known and associated with many celebrities.

As visitors to Chadstone have free parking as well, it is sure to be well attended, indeed it was exceedingly busy when I attended the showcase with a friend recently. 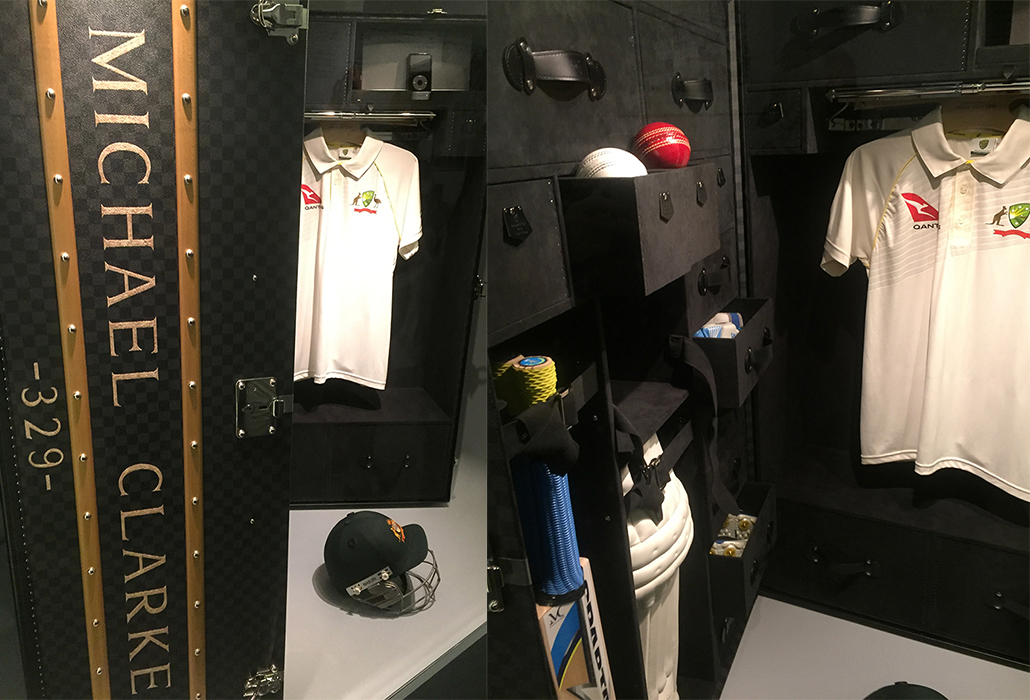 The Time Capsule Exhibition of Louis Vuitton at Chadstone is sure to have broken new records before it closes March 21, 2018.

Visitors are able to access some of the most high-profile pieces from the companies historic journey. Free admission and guided tours provided to community groups, schools and charities on offer is making it an attractive show to see. 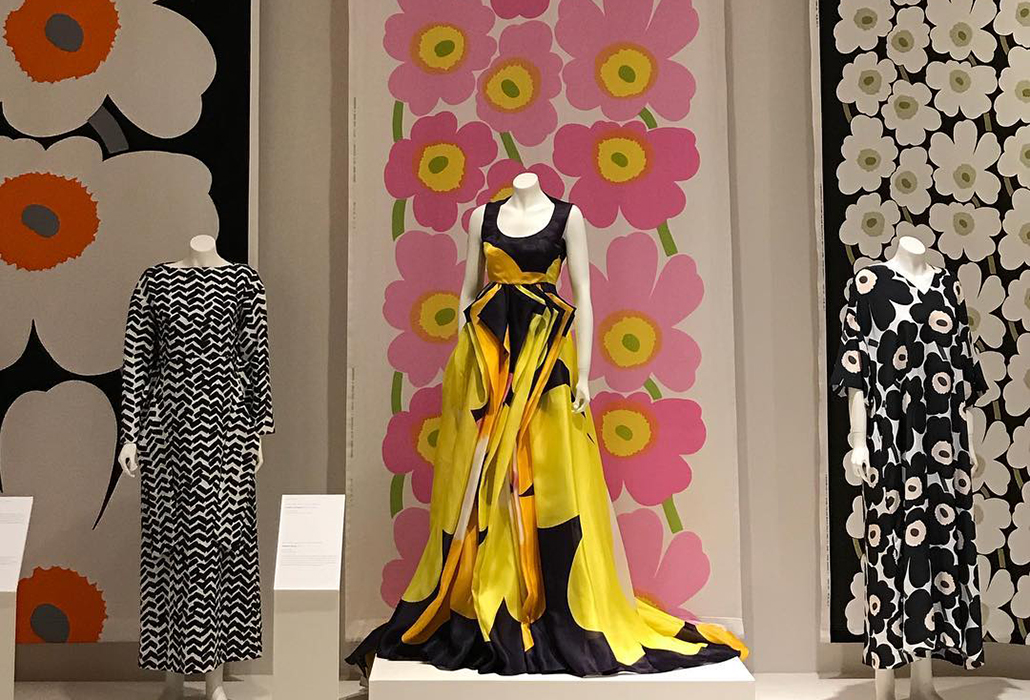 Out in rural Victoria, the Bendigo Art Gallery, a city integral to the centre of the state, started the weekend of March 3, showcasing the company that became a rage design icon during the swinging 60’s and 70’s. Marimekko: Design Icon 1951 – 2018began their exhibition which is also an aspect of Melbourne Design Week 15 – 25 March, NGV, looking at how the nature of design impacts on our contemporary life today. 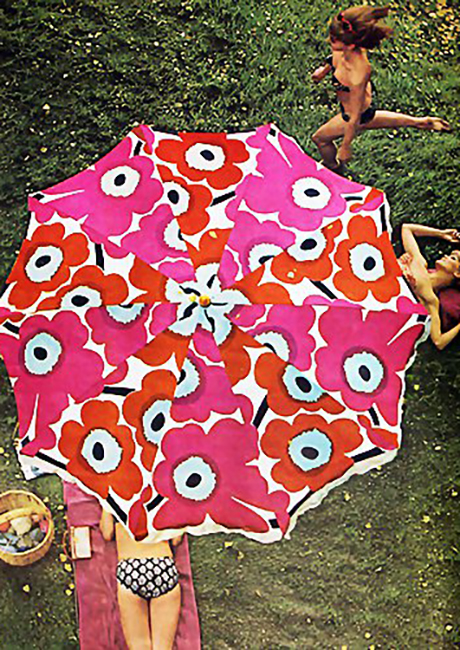 The big bold screen prints mainly on cotton, certainly impacted on my life as a young designer with its Pop Art style of graphics. They knocked our socks off at the time, with their boldness, aesthetic and ideas of informality and everyone clamoured to have them in their homes, post war and the depression.

This was happening at a time when formality in society was beginning to stifle a great many of the younger people born following the end of World War II, who were full of optimism and ideas about what lay ahead and wanted a more honest, simple and open approach to life. Today, wherever you go in the world, Marimekko is instantly recognisable, especially by its fabulous Poppy and flower designs.

This fabulous travelling show developed in Helsinki, Finland, features some 60 plus outfits, with great swathes of original fabric, homewares and other objects created by many different talented individual designers, who helped the brand expand internationally.

The exhibition Marimekko: Design Icon 1951 – 2018 also has many programs and events attached to its display until it ends on June 11, 2018, all accessible on the Bendigo Art Gallery website. 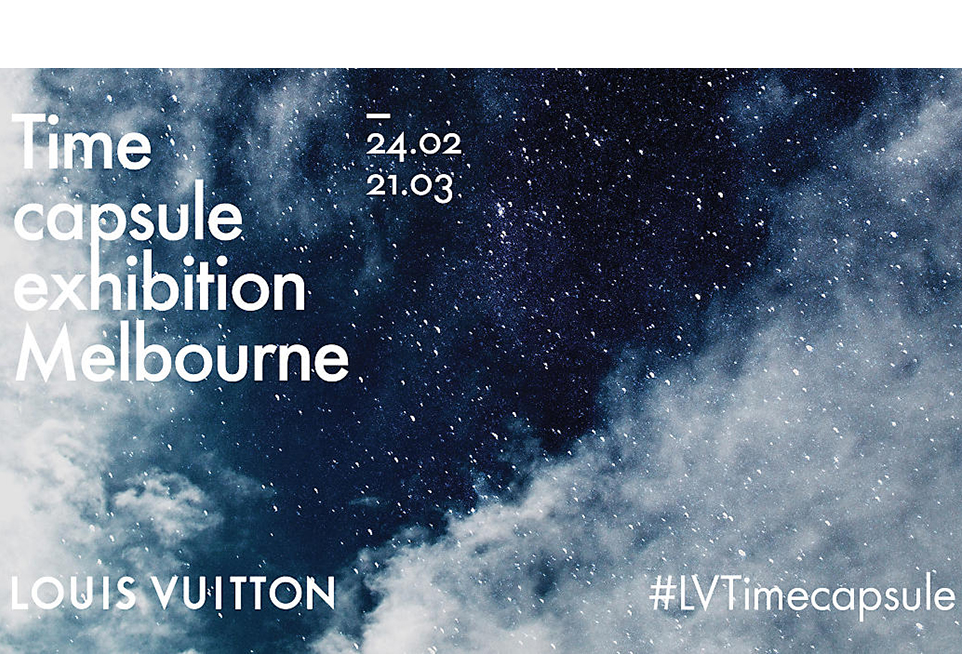 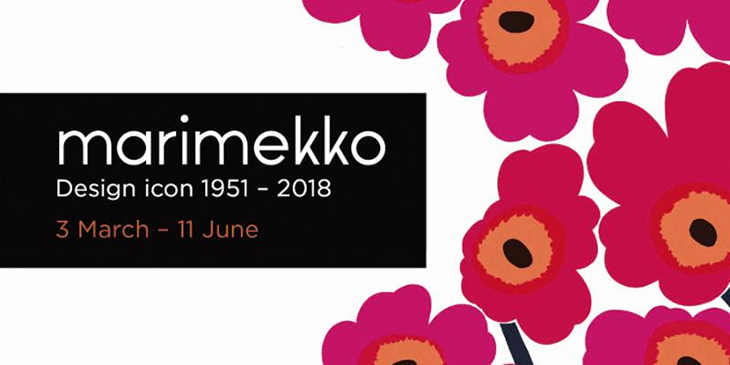 New Zealand International Early Music Festival will be on 28 Feb – 7th March, 2015 so plan your trip over the Tasman to enjoy glorious sounds of the Renaissance