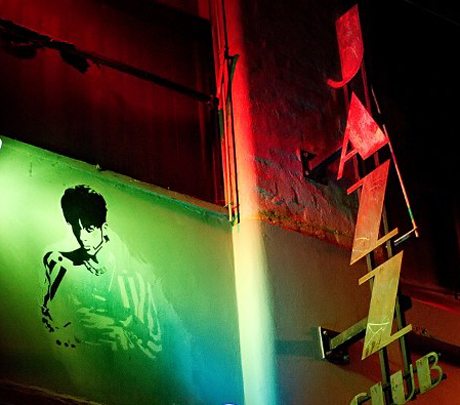 January, 2014 in Melbourne started off most accommodatingly; an occasional hot day followed by rain made the garden and me look quite perky.

Alas, climate change did its thing, sending an unprecedented wave of hot air to linger over not just my garden but most of Victoria causing tempers to fray.

February’s weather is bad, if not much worse than January and surviving it is what we do.

After wrapping the garden in shade-cloth I felt decidedly unperky – and so decided that a quick pick-me-up was needed, mucho fast.

A jug of wine (a glass would do), a loaf of bread (maybe a sandwich)… and Jazz or classical music in Melbourne’s great music venues, followed by a visit to the Mornington Peninsula Regional Gallery seemed like a terrific idea to me so that’s what I did.

I rocked out to all that jazz for days! Here are some of the city’s best jazz venues, where the temperature and the music are always cool!

The Club hosts local and international musicians every night and Lonely Planet has dubbed it “the world’s best jazz club”.

Brisbane based jazz singer Cate Shaw performed at Ziggy’s recently and had patrons saying ‘she’s fabulous! What a show!’

At Dizzy’s the music is syncopated and the dining experience always good; Dizzy’s restaurant provides delicious modern cuisine and has an excellent wine list. The food’s pretty good as well.

Ian Smith and Friends gig every Sunday from 12.30 pm at The Amora Hotel in Richmond, down by the riverside. You never know who Ian’s ‘friends’ will be which ensures a unique buzz to every Sunday performance.

Lunch and drinks are available and in the summer months having a bite to eat while listening to some sensational jazz in the Amora’s courtyard overlooking the Yarra River guarantees a good start to the week.

Check out Ian and his group

And now something to look forward to:

Lucius “Lu” Watters (1911- 1989) was a trumpeter and leader of the Californian Yerba Buena Jazz Band in the “West Coast revival” of Dixieland music.

Steve Waddell’s The Creole Bells is one of my favourite jazz groups and this is going to be a seriously swinging huge event so don’t miss out.

If you don’t live by or can’t get to Melbourne’s bayside beaches this summer a visit to the current exhibition running until 2nd March ‘Sea of Dreams: Port Phillip Bay 1915–2013 (Part two)’ at the Mornington Peninsula Regional Gallery, which focuses on artistic representations of Port Phillip Bay, is mandatory.

Just viewing these wonderful works will lower your body temperature, refresh your spirit and feed your soul – the paintings on display, by some of our best known artists, tell the coastline’s story in fascinating images of historical and current events.

It features many rarely seen gems, some of which have only recently come to light.

A diverse collection by Australian artists whose works are closely associated with the bay; in addition to languorous summer haze ‘blue and gold’ views of the coastline. Clarice Beckett’s painting of a young woman sun bather, lounging on the sand, face covered by a floppy hat, umbrella unfurled ready to ward off the suns’ rays, entitled ‘The Red Sunshade’ is still as vibrant and evocative of a sea breeze as it was when she painted it in 1932.

Clarice Beckett painted what would seem pedestrian to most of us; a strip of wet tar-sealed road, bordered with telegraph poles, delicate sunsets, lights glowing in the fog, misty mornings with a glimpse of a tram or T-model Ford. 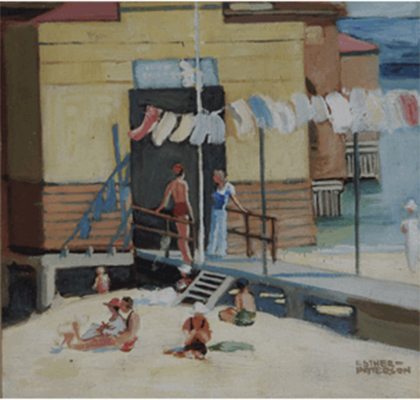 Working to record her own urban environment she filled her canvasses with understated shapes and colours, resulting in sometimes dreamlike but always arrestingly beautiful compositions.

Esther Paterson’s painting of ‘Middle Park Baths’, undated, depicts every Melbourne family’s summer weekends in the ‘50’s and ‘60’s; I could hear the squeals, feel the sun and smell the sticky salty air.

Mc Cubbin’s, ‘The Old Slip Williamstown’ and James Smeaton’s ongoing affair with Williamstown shipyards are displayed along with Fred William’s rise of the West Gate Bridge.

This was painted before the tragedy that resulted in the deaths of 35 workers and Nolan’s 1945 painting of St. Kilda’s original Palais de Danse burning, the flames watched by onlookers as firemen struggle to contain the blaze.

These are just some of the works in an exhibition which encompasses nostalgia for times gone by along with the creation of cultural identity and environmental change and disasters. To fully appreciate this truly lovely and important exhibition when you visit, set aside time to stroll while experiencing the work of Australia’s major artists.

Since its establishment in 1971, Mornington Peninsula Regional Gallery (MPRG) has grown to become one of Australia’s leading regional galleries, renowned for its exhibition program of Australian and international art.

The Gallery embraces traditional and contemporary art in all its forms, ensuring there’s something for everyone.

National touring exhibitions and MPRG-curated exhibitions offer a rich cultural experience for the local community as well as visitors to the region who travel the easy distance from Melbourne to enjoy the Mornington Peninsula’s beautiful coastal scenery and hinterland. If you see jewellery as wearable art (I certainly do) then the MPRG’s next exhibition ‘Signature Style’, 14 March – 11 May 2014, is one not to miss. Challenging conventional ideas of jewellery, this exhibition explores relationships between the wearer and the body adornment worn.

This exhibition is a partnership between Craft Victoria and NETS Victoria. Pack the Esky, a couple of picnic rugs and rock along to King’s Domain. Gates open at 4.00pm.

Sat Feb 22
Rachmaninov and Tchaikovsky
Free pre-concert entertainment from 5pm
Andrew Gourlay conducts this all-Russian program. Melbourne’s own Caroline Almonte is soloist in the concerto everyone knows from the iconic film Shine as “the Rach 3”.

So there you go, the sun may be on overdrive but no need to moan, respite and recreation is easy to come by in Melbourne’s music venues and eateries.