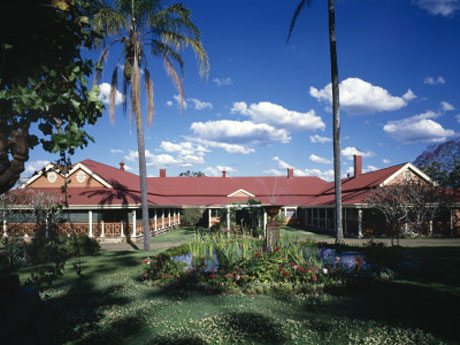 I am writing this on the seventh anniversary of the passing of (Beryl) Margaret de Burgh Persse Hockey O.A.M. (8 January 1941 – 11 February 2004). She lived all her life in one of Queensland’s most historic houses, Nindooinbah, which is sited superbly in a lovely valley nearby to Beaudesert in Queensland.

Margaret de Burgh Persse Hockey descended from two of Australia’s great pastoral dynasties, the Collins and Persse families, who at the turn of the twentieth through married alliances guided the development of some sixteen million acres in Queensland and the Northern Territory. They also built, or owned, many of its most extraordinary early homesteads, twelve of which are still lived in, and conserved by descendants today.

A traditional Queenslander dating from the 1850s, Nindooinbah had very large rooms, wide ornate verandahs and elaborate woodwork fashioned from Australian cedar that once grew on the property. A local Aboriginal word Nindooinbah means ‘the place of ashes’. Margaret’s grandparents William and Gwendoline Collins came to the property in 1900 when they set about extending the house between 1906 – 8. They established an extensive walkway, planted a spectacular stand of Jacaranda trees and Camphor Laurels.

In a lot of ways I suppose some may consider it a cheek for someone from Sydney to write about a quintessential Queensland lady, one of whom so many others would know a great deal more. However all my encounters with Margaret, although albeit brief at times, were so entirely memorable that when she passed in 2004 I felt compelled to write of her as a way of thanking God for her life. A copy of the splendid eulogy written about her, expressed so eloquently by her cousin, the former Head of History of Geelong Grammar, Michael Collins Persse at her funeral in St. Thomas’s Anglican Church, Beaudesert on the eighteenth day of February 2004, is now appropriately in the archives at St. John’s Cathedral, Brisbane. The eulogy was beautifully written and delivered, a true celebration of a warm and generous life reflected so completely in the house and garden that Margaret loved so much and shared with so many people. Her family has long been associated with the cathedral, donating its wonderful stained glass wheel window as well as ten others situated throughout the church and east end. My first encounter with Margaret was during the 1980’s in Sydney at an Art exhibition of the work of her husband and friend artist Patrick Hockey (1948-1992).

His was a natural talent compared stylistically to Sidney Nolan, although the subject matter of his early work was closer to another early Australian artist Russell Drysdale.

When Margaret and I met we discovered that we shared a common love of, and interest in many art disciplines, most especially the design, creation and conservation of great heritage houses and gardens.

My indelible memory of meeting Margaret was of experiencing her great sense of fun, listening to her most delightful, lilting laugh, while feeling nothing but immense joy at encountering her warm and generous spirit. Margaret’s grandparents travels to Japan influenced their layout of the garden, particularly the design of the grand entry pergola. Gwendoline was a keen gardener well into old age and began the project of developing the huge garden that Margaret’s mother, and then Margaret herself both continued.

Margaret was born, and spent all of her life at ‘Nin’, as it became more affectionately known. She married artist Patrick Hockey in 1983, and together they began to restore the house and garden. Patrick Hockey’s arrival, having fallen in love with both Margaret and her house, was indeed timely. His artistic flair and skill as a garden designer was an inspiring force and, they worked hand in hand, and hard to restore and revitalize the house and garden.

His abiding presence will always be evidenced by the beautiful water lily filled lake with its delightful Japanese Tea Pavilion that seemingly floats over it, picking up on the earlier oriental theme. It was a delightful addition, where one could while away a gentle afternoon, sip tea slowly or, indulge a quiet contemplative mood. Patrick also designed the entrance pond and the fountain picking up on the oriental influence the Collins’s had admired so much.

His studio stood in a quiet place and had a spectacular view of the mountains. He painted the garden, the flowers and scenes of the house, inside and out, as well as their pet dalmations and, during his lifetime these were hung throughout the house.

My long-standing private invitation to visit ‘Nin’ finally came to fruition in 1998. I was in Brisbane presenting a sixteen week course on the Evolution of Art, Design and Style and Margaret phoned to say that I should come down to the house for lunch. What a joy it was, seated on the verandah looking across the gardens it was like stepping back in time. Then in 1999 Margaret invited me to bring the students on my one year Certificate Course to the house to end the year with a gorgeous garden party, which everyone enjoyed.

This became a fixture in the Academy calendar from 2000 when I began living and working in the precinct of St John’s Cathedral at Brisbane. The Academy was sited in a huge space on top of a wonderful ‘Arts and Crafts’ style building St. Martin’s House. Originally created as an apartment for a priest living in the precinct, one room was so large we made it a library and teaching space to present courses in design history and the decorative arts.

At Nindooinbah with Margaret during those happy years I shared many a light and delicious lunch on the verandah looking out over a simply gorgeous garden filled with roses, annuals and its well-known pink and white Shirley poppies. Then, until she became too ill with the cancer that finally defeated her, I also enjoyed some absolutely amazing visits to Nindooinbah with friends.

One memorable lunch in the delightful dining room was thrown for my birthday at ‘Nin‘ in December 2002. As a special Guest she invited a mutual friend Martyn Cook, the antique dealer from Woollahra at Sydney who had exhibited Patrick’s work. It was simply one of the loveliest days I have ever spent and much treasured in my memory. One group of design history students decided a ‘hat parade’ was appropriate for one visit near Easter that included lunch on the wide verandah. Margaret particularly enjoyed that day, donning a bonnet, joining into the fun and taking on the difficult task of choosing a winner. She had a fund of stories to tell and share about the house and its many visitors and occupants.

As she led you from room to room her enthusiasm and reverence for its place in Australia’s fascinating history was keenly felt. There were the family portraits and wonderful paintings, many by Patrick especially those in his studio still in the spot where he had placed them before his passing in 1992.  She could not bear to move any, or to sell them. This was proven by one instance when she wanted to donate one to assist the establishment of a Cultural Centre at Musgrave Park. As only Margaret would, she went and purchased one from the Schubert Galleries at the Gold Coast in order to do so.

We all remember the enjoyment of viewing and hearing about the china and porcelain collection, which graced the living room with its stunning wallpaper and delicate lace curtains fluttering in a welcoming breeze. The whole experience was enhanced by the vast array of scents that wafted across the verandah and in the doors from the garden to assault the senses and linger long in the memory. 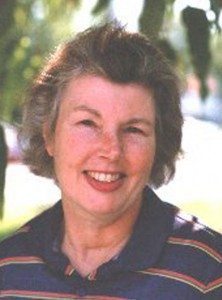 Margaret was an indomitable spirit; many would say she had a very stubborn streak, however if she set her mind to achieve something she did. She learned Braille so she could better assist in translating books for the Queensland Blind Institute and worked hard to raise the profile of the district of Beaudesert. She was admired far and wide for her commitment to its history and future potential. Her judgment proved sound for the area has grown greatly in recent years as many new wineries have been established in an area that has as its picturesque backdrop Mt. Tamborine.

Margaret was involved with many bodies that she either worked voluntarily for, and/or helped financially, opening her house continually for fund raising for the many ecumenical charities and the many causes she supported. She was involved with the Arts Council, Queensland Art Gallery, the Open Garden Scheme and so many clubs, societies and associations that the list of those who nominated her for a well deserved O.A.M. in recognition of all her many kindnesses, was extremely long.

An important aspect of Margaret’s outstanding character was her faith in Jesus Christ as her Lord and Saviour. Indeed the last morsel of food that passed her lips was the holy sacrament.  In her eulogy Michael Collins Persse recounted how the Rev. Ian Turnbull had ‘anointed her to her great comfort, for her journey towards, and through the gate of Death, that gate we all must pass before the soul is brought by angels into the presence of God. 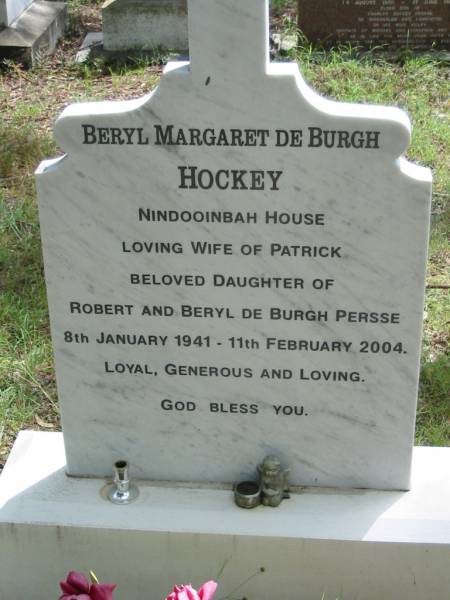 Margaret’s passage through the world left an influence for all time one shared by all those who remember her. Today and always Margaret, thanks be to God, for allowing us to enjoy so much time in your presence.

Throughout her illness her generosity of spirit shone with great luminosity as she set about relieving the burdens of everyone she encountered by brightening their day. Her ashes were laid to rest alongside her beloved husband Patrick Hockey at the chapel of St. John’s, built in 1900 on the nearby Mundoolun, another family property.

Margaret de Burgh Hockey’s life was one that espoused integrity, was admiring of beauty and overflowed with great kindness and love. All who encountered her on their life’s journey was both enriched and enlightened by the experience. Those who loved and respected Margaret and her achievements will long remember her many kindnesses.

We all have an opportunity in life to try to make a difference however hard it may seem. Margaret de Burgh Persse Hockey with her warm welcoming nature and wish to share her many gifts and blessings was a great ambassador for her faith and belief system and proof positive of ‘the power of one’ in changing lives through goodness.