English Playwright Will Shakespeare’s tragicomedy about a bitter Jewish money lender (Shylock) seeking revenge on a Christian Merchant of Venice (Antonio), who had defaulted on a loan, was a common tale in late 16th century England. A merchant’s ring was a central aspect of the story, in which a pound of flesh became too high a price to pay, especially at the court of the Stuart King James 1 of England, James IV of Scotland in the spring of 1605 where the first performance of this groundbreaking play was recorded.

By the 15th and 16th centuries life in both England and Europe was filled with cloak-and-dagger style politics, many intrigues, elicit romances and the schemes of greedy nobles, hungry for the power that surrounded monarchy. At London the court was renowned as a dangerous viper’s nest. Many of the elements found in Will Shakespeare’s plays, including incest, love, illegitimacy and tragedy, were basically people’s everyday real experience.

Rings don’t just mean one thing in The Merchant of Venice – they’re significant for all sorts of reasons symbolism, imagery and allegory. Many rings at the time bore the ‘mystical sign of four’, a development of the ‘Chi Ro’, a Christian symbol and the Greek letters for Christos Rex.

Merchants who all wore rings, simplified it to a 4 or an inverted 4. The four combined with the merchant’s own symbols was not only to identify his cargo but also to ward of the Devil and evil spirits. 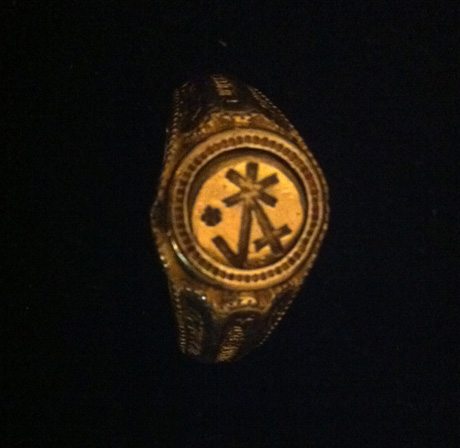 Inside the shank is an inscription ‘IHESVS.NAZARNVS.REX.IVIDEOR’ and the reference ‘Jesus Nazarenus’ is significant. The recital of such words was considered protection against sudden death. The swivel bezel has the mark of the Merchant it belonged to on one side and the monogram S R on the other side.

Merchant adventurers used their trademarks to identify themselves and they date mainly from the fifteenth century, a period when the merchant classes were expanding and they were traveling more widely.

A widely held belief at the time was that the ‘unbroken’ circle of a ring was useful in the ‘conjuration of demons’.

A merchant visiting London in the sixteenth century had his portrait painted by court favourite, Hans Holbein the Younger (c1497-1543) who had a genius for subordinating the interest in garments and accessories to heighten facial characteristics. The Latin inscription on the paper on the office wall behind Gisze’s image certifies the portrait’s accuracy “Distich on the likeness of Georg Gisze.

The image was a showpiece for artist Hans Holbein the Younger’s great natural gifts in recording the portraits of eminent Englishman by the end of 1526. A misaligned set of scales and the placing of a vase of flowers too close to the edge of the table are suggestive of the instability of the world and our place within it.

Gisze, like many of his contemporaries, would have also worn his golden merchant’s ring as an important accessory to his splendid costume and it reflects both his integrity in business and his always-professional approach to getting the job done. 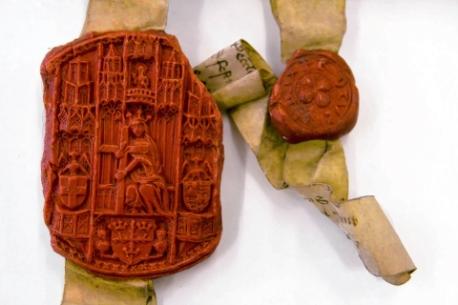 Seals attached to deeds created in 1462, found in the Essex Record Office now in the Colchester Arts Centre

Death was a co-traveler for anyone in a time when hygiene was not a major priority, the roads dangerous and frequented by robbers, as were the high seas by pirates.

During the era of the Tudor and the Stuart Kings and Queens of England Merchant’s, via their rings, left their mark on bales to identify their goods.

Red wax seals also imprinted by merchant’s rings survive on many documents, testifying to their widespread use.

In an age before literacy was widespread, when so many people could not write, imprinting your initials or mark via your signet ring was an acceptable alternative.

Rings were regarded as inherently magical, mingling both earthly and spiritual concerns.

Marks similar to those used by merchants were found in the wreck of the merchant vessel the Mary Rose, which sank in 1545 and was salvaged in 1982, recovering artifacts of immeasurable value that formed part a Tudor era time capsule of history.

Certain gemstones were also inset into some signet rings and worn to protect the wearer in a period when it was hard to distinguish between science and magic.  Allowing a gem to touch the skin of the wearer was especially advantageous, because with all the superstition that abounded at this time, direct contact of the stone with the skin was believed to have medicinal and therapeutic benefits.

Merchant’s marks were prototypes of the modern trademark and used by the merchants, who belonged to the various guilds that sent their goods abroad and were able to guarantee that, whatever the items were, they were both sound and good.

Their occupations can also be identified through inscriptions and documentary evidence and their ranks included ship-owners, grocers, drapers, tailors, brewers and ironmongers.

Evidence given by one Thomas Watts, a mariner of Brightlingsea in Essex, as to an alleged debt owing by Robert Cliff of York to Thomas Brytlysey, shows that the claims of the mercers fellowship to settle disputes about debts in their own court of law was a reality.

Although in the fourteenth century and first decade of the fifteenth century, such cases were taken to the court of the mayor.

However surviving documents reveal that this epoch marks the zenith of the power of the merchants as a self-governing community.

Merchant adventurers were an important aspect of the great diplomatic exchange of gifts that happened as they traversed the highways and byways of roads across Europe and those traversing the Silk Road into faraway exotic climes. They were usually welcomed at royal courts along the route they traveled, giving them an access into the very society that could afford their wares. In the process they also became cultural ambassadors for both their country, and their cause. During the 13th century Merchants of Venice Niccoló and Matteo Polo had set a precedent, taking important gifts to Cathay for the ‘Great Khan’ Kublai, who had sent a message of friendship to the Pope, as well as a request for 100 learned priests and oil from the lamp burning over the Holy Sepulchre at Jerusalem.

Niccoló Polo’s son Marco, aged 20, was charged with delivering them to him

By the middle of the fourteenth century merchant adventurers had access to the sea and a small body of Englishmen, each trading with his own capital, his own factor, using his own individual methods of trade, managed not only to break the monopoly of the state-regulated English staple, but also to wear down a powerful organisation of foreign merchants, the Hanzards.

They had seized the lion’s share of England’s foreign trade and from 1356 to 1420 was marked by steady mercantile and industrial development that worked within a complicated framework of religious and social connections.

The fifteenth century Merchant’s Ring on show and offered for sale at the Australian Antique & Art Dealers Association Fair at Melbourne 24 – 28th April is in a fine state of preservation, and has fabulous inscriptions. Dealer Anne Schofield will be only too willing to share their messages with collectors of objects of such rare charm and historical significance.

It has an excellent provenance too, coming from a line of illustrious owners, who included Monsieur G. Guilhou of Paris. He sold it at Sotheby & Co, London on Tuesday 9th November, 1937. His superb collection included rings of the classical period,  rings from the ‘dark ages’, the Middle Ages, the Renaissance and Modern Times especially Byzantine, Merovingian and Carolingian Rings, Signets and Portrait Rings of Personal Sentiment, magical, religious and Papal rings, peasant and oriental rings.

Must have been amazing.

AAADA Fairs offer for sale the finest and most diverse range of fine art and antiques in one place, at one time, in Melbourne.

AAADA Fairs are Australia’s only international quality shows. They are fully vetted for authenticity and backed by the reputation of Australia’s finest antique and art dealers.

The gilded coffin of Nedjemankh, a priest of ancient Egypt, will be displayed with seventy-other works at The Met Fifth Avenue New York, 20 July – 21 April 2019