At any time the Metropolitan Museum of Art (The Met NY) there are a great diversity of displays of art from different cultures and in many mediums. An exquisite small display of eighteenth century pastels currently on show in Gallery 624 is a rare look at a medium, which the great French salon critic, philosopher and writer Denis Diderot (1713 – 1784) described as no more than dust in an age when drawing and ‘painting’ in pastel was exceedingly popular, especially for portraiture. Unlike today, pastels were regarded as paintings in the 18th century. Italian artist Benedetto Luti (1666–1724) recorded in pastel a study of a boy wearing a blue coat in which Luti conveys the disarming directness and sweetness of childhood. Pastels were executed in vibrant colors on paper mounted on a wood strainer, elaborately framed with costly glass and on an intimate scale suited to the refined living spaces of the aristocracy and the haute bourgeoisie. A portrait of Two Sisters recorded in 1770 by Jean-Claude-Richard de Saint-Non (1727–1791) in pastel on paper reproduces an oil painting by Jean-Honoré Fragonard, which by chance is also in The Met. The identity of the sitters is not known and typically of their time, the girls are dressed as adults. The doll, a Polichinelle, takes the form of a clown with a mask and a bicorne hat are a reference to the popular Commedia dell’Arte. 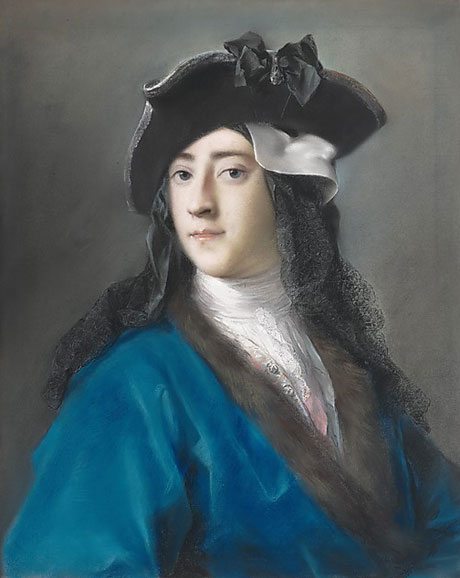 The ‘Commedia’ were a cast of colorful clown like characters that emerged in northern Italy in the 15th century and rapidly gained popularity throughout Europe, especially at Masquerade time in Venice. Gustavus Hamilton (1710-1746) was depicted with his ‘mask tucked up under his hat so we can see his face. Pastel works retain their original brilliance when kept in good conditions, out of light. Pastellists kept hundreds of these fabulous short sticks of pure colour on hand, which consisted of finely ground pigment and a binder then rolled into sticks and made in a progression of beautiful tints and shades 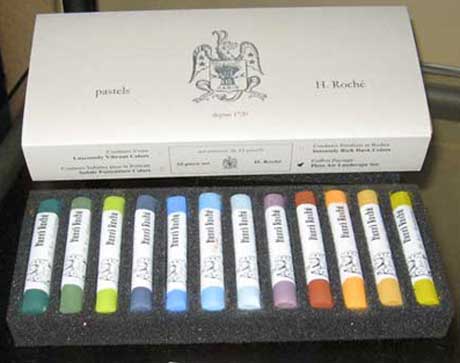 Interestingly the first pastel ‘paintings’ The Met ever acquired were by impressionist artists in a 1929 bequest. However since that time they have actively sought to go back in time to seek out older pastels, because the medium does not contain resin and this means the surfaces of works rendered in pastel never had to be varnished, doing away with the ageing process that often alters the hues of paintings in oils. Whether you have a talent or not for drawing pastels, like those still available at Impressionist artist Edgar Degas’ art supplier Henri Roche in Paris are so appealing you simply want to pick them up and start trying for yourself, such is their power of evoking a response. The good thing to know if you are in New York, The Met is now open 7 days a week. Eighteenth-Century Pastels August 2–December 29, 2013 Gallery 624 The Metropolitan Museum of Art, New York.