Michelangelo: Divine Draftsman and Designer at the Metropolitan Museum of Art is a monumental exhibition comprised of over 200 works by a towering genius in the history of Western art, Michelangelo Buonarroti (1475–1564). 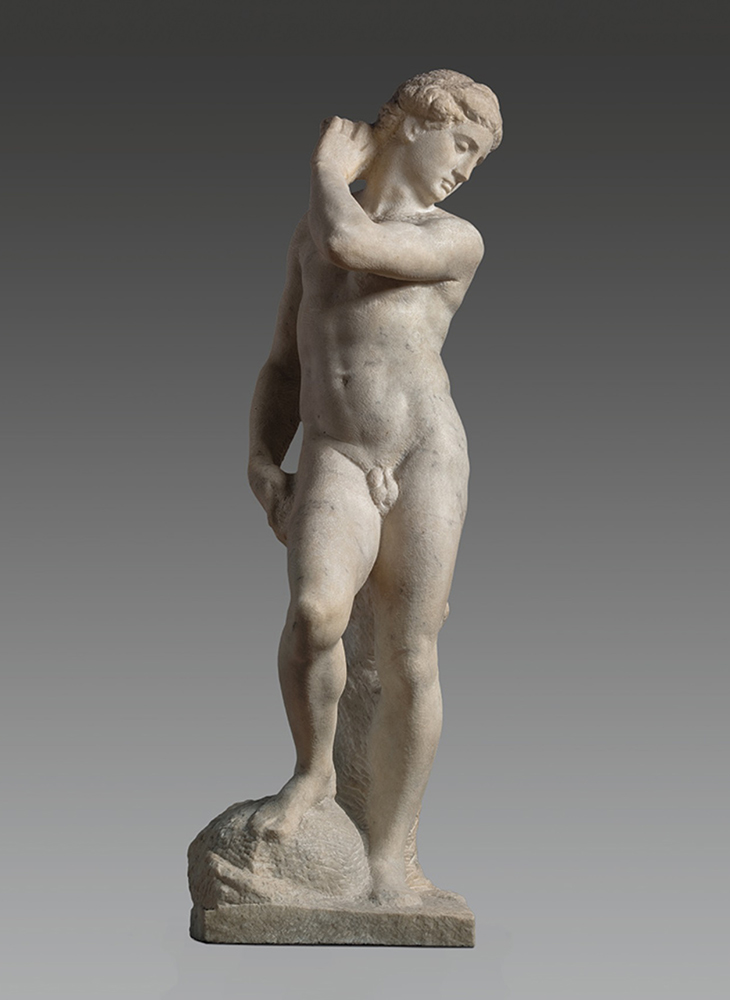 Paintings, marble sculptures, architectural models, hand written pages of poetry and over 133 drawings gathered together from 50 major collections and galleries around the world.

It is a once in a lifetime experience to see an exhibition of Michelangelo’s work on this scale. The transport and exhibition, let alone the political and logistical issues involved means that the majority of the works, in all likelihood will not leave their controlled environments again to be exhibited in public. 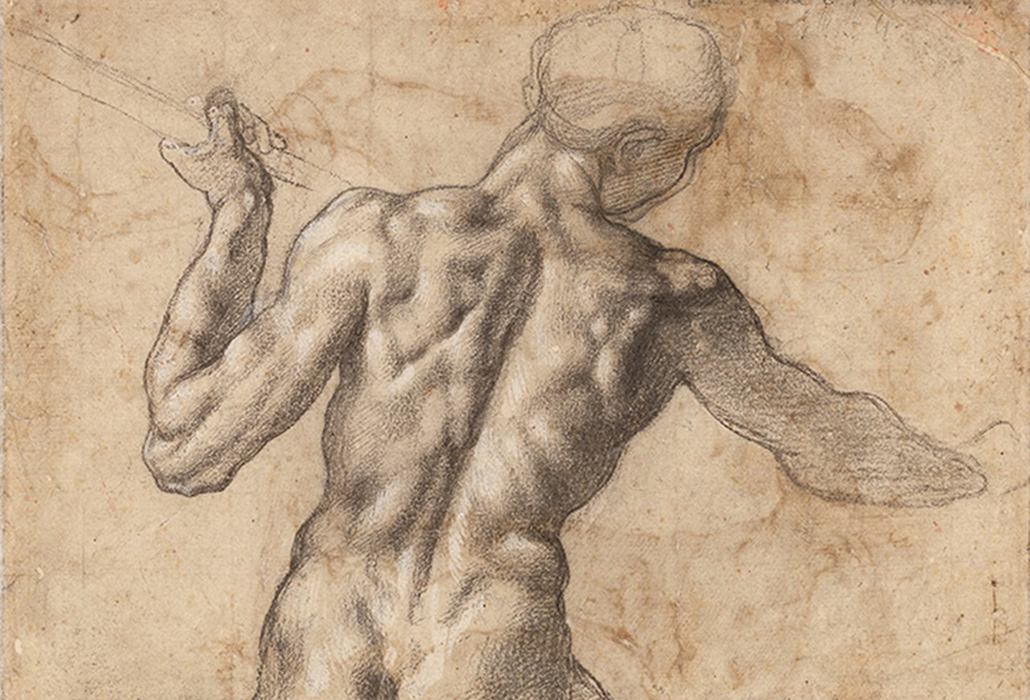 Michelangelo Buonarroti (Italian, 1475–1564). Study of the Torso of a Male Nude Seen from the Back. Black chalk, with lead-white gouache highlights. Albertina, Vienna (123)

How do you look at and talk about a genius of this order, one so breathtakingly gifted? Any comment or praise seems inadequate.

Thankfully, the access to the immensity of Michelangelo’s achievements is brilliantly arranged by the curator, Carmen Bambach. 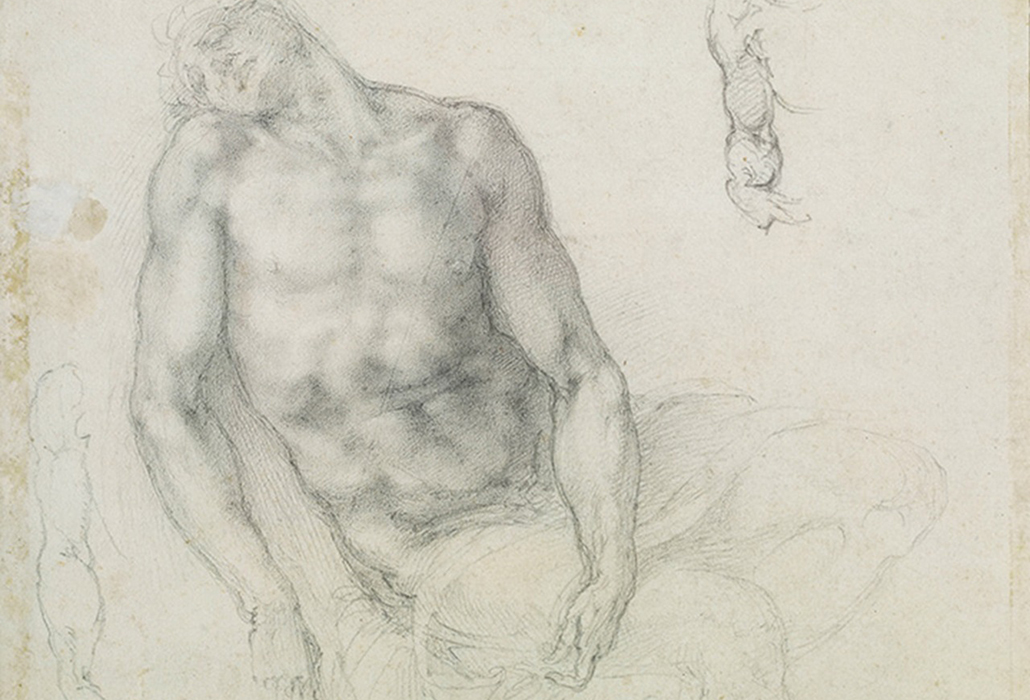 The exhibition is constructed around clusters of drawings exploring themes and projects. There are intimate glimpses of ideas followed by grand scale visions.

The backbone of the exhibition and Michelangelo’s entire body of work, are the drawings. Drawn predominantly in sanguine, they range in scale from intimate and private to drawings of an immense and dramatic rhetorical scale.

The fleshy warm tones of sanguine are a perfect medium for the inexhaustible passion and life impulses surging through Michelangelo’s work. Sanguine literally means dried blood and its sturdy, ardent, ruddy hue has appealed to many artists, including Leonardo Da Vinci and Raphael.

Many drawings are tiny, not bigger than a hand. Studies such as ‘Sketches for Compositions of the Pieta and Entombment’ is no more than 15cms by 50cms. It is five separate studies done in black chalk on one sheet of paper, each drawing tremulous, searching, teasing out the composition. Michelangelo Buonarroti (Italian, 1475–1564). Studies for the Libyan Sibyl. Red chalk, with small accents of white chalk on the left shoulder of the figure in the main study. The Metropolitan Museum of Art, New York, Purchase, Joseph Pulitzer Bequest, 1924 (24.197.2)

Michelangelo’s late drawing has been described as “La mano tremante”- the trembling hand, a deliberate, sought after effect to suggest life and movement.

In his drawings, Michelangelo is often drawn to the quirky, idiosyncratic or unguarded moment in a subject’s expression. His studies for the ‘Ancestors of Christ’ on the Sistine Chapel ceiling gave him opportunities to experiment with characters he observed and included. ‘Study of a Man in Bust Length Red Chalk’ is alive in detail, a perky, punky young man straight off the street.

Many drawings were made as gifts for friends and lovers and they reveal an intimate and personal tone. A portrait in black chalk of his friend of over 50 years, the young aristocrat Andrea Quaratesi, is an image of such dreamy loveliness and sensitivity it takes your breath away. The counterpoint to the private and personal is the public, and no-one was more famous, more successful, more prolific, more diverse than the towering figure of Michelangelo.

It is staggering to contemplate the vastness or commissions he undertook.

His fluent control of gargantuan scale defies understanding. One of the few surviving fragments of a monumental cartoon is displayed in this exhibition. It is of two Roman soldiers and was for the fresco ‘The Crucifixion of Saint Paul’ in the Pauline Chapel.

It is drawn in charcoal and black chalk on nineteen large sheets of paper glued together. The style is broad and gestural. In some of the work, you can see tiny holes pricked in the outlines. They act as a stencil in order to transfer the drawing to the wall as a preparation for the painting.

Looking at the huge drawing and taking in the details of the process and techniques, it is possible to feel the exhilaration of being in Michelangelo’s studio surrounded by his crew of artisans and assistants. The overwhelming achievement of Michelangelo is that he gave us the intimately uplifting, near mystical experience, the transformation of the humblest materials, red or black chalk, charcoal, paint, stone, wood and paper into transcendent celebrations of life.

His work is an affirmation of his passionate humanity and allows us to feel our own passion and humanity.

Bitter Wash Road by Garry Disher says Janet Walker is smooth assured crime writing at its very best by an award winning author and master of his craft; intrigue