Michelangelo: Divine Draftsman and Designer, organized by Carmen C. Bambach, Curator in the Department of Drawings and Prints, will be a once-in-a-lifetime exhibition on display at The Met Fifth Avenue, New York, November 13, 2017 – February 12, 2018

There will be approximately one hundred and fifty master drawings, three marble sculptures, his earliest painting, his architectural model for a chapel vault, as well as a substantial body of works by other artists for comparison and for context, will be on display.

The works of artist Michelangelo Buonarroti (1475–1564), the rock star artist of his day, remain as fascinating and beguiling today as they were in his own time. He is without doubt a towering genius in the history of Western art.

Before his body was laid to rest in his tomb, ‘… many of those talented people who have always abounded in Florence, attached various verses in Latin and Florentine over the tomb, and this continued for some time; and the compositions, which were later published, formed only a small proportion of the many that were written’**

International loans will include a series of masterpiece drawings created for his friend Tommaso de’Cavalieri and a monumental cartoon for his last fresco in the Vatican Palace. Selected from fifty-four public and private collections in the United States and throughout Europe, the exhibition will examine the rich legacy Michelangelo left to the world at large – his invention providing a foundation for all the arts in his time and in the future.

Drawing is the most accessible form of art we have. Really all you need is paper and a pencil or a marker of sorts, to provide a basis for many creative processes. After da Vinci, Michelangelo took drawing to a whole new level, as with dazzling technical virtuosity and through a powerful language in images, he communicated ideas, expressed conceptions about self, society, culture and community as well as about the past, the present, the transient and the eternal.

By the end of the fifteenth century artists in Italy had freed themselves from restrictive guild rules. They were at last able to accept any commission and individually, which gave them an opportunity to also become intimate friends with leading citizens, which only aided their success.

Artists became recognised not only as a skilled technicians but also as a thinkers, discoverers and inventors and in the case of Michelangelo, it went much further than that. Flatteringly his peers called Michelangelo Il Divino (“the divine one”), his dazzling technical virtuosity in every medium he embraced, transported the viewer into a whole new stratosphere 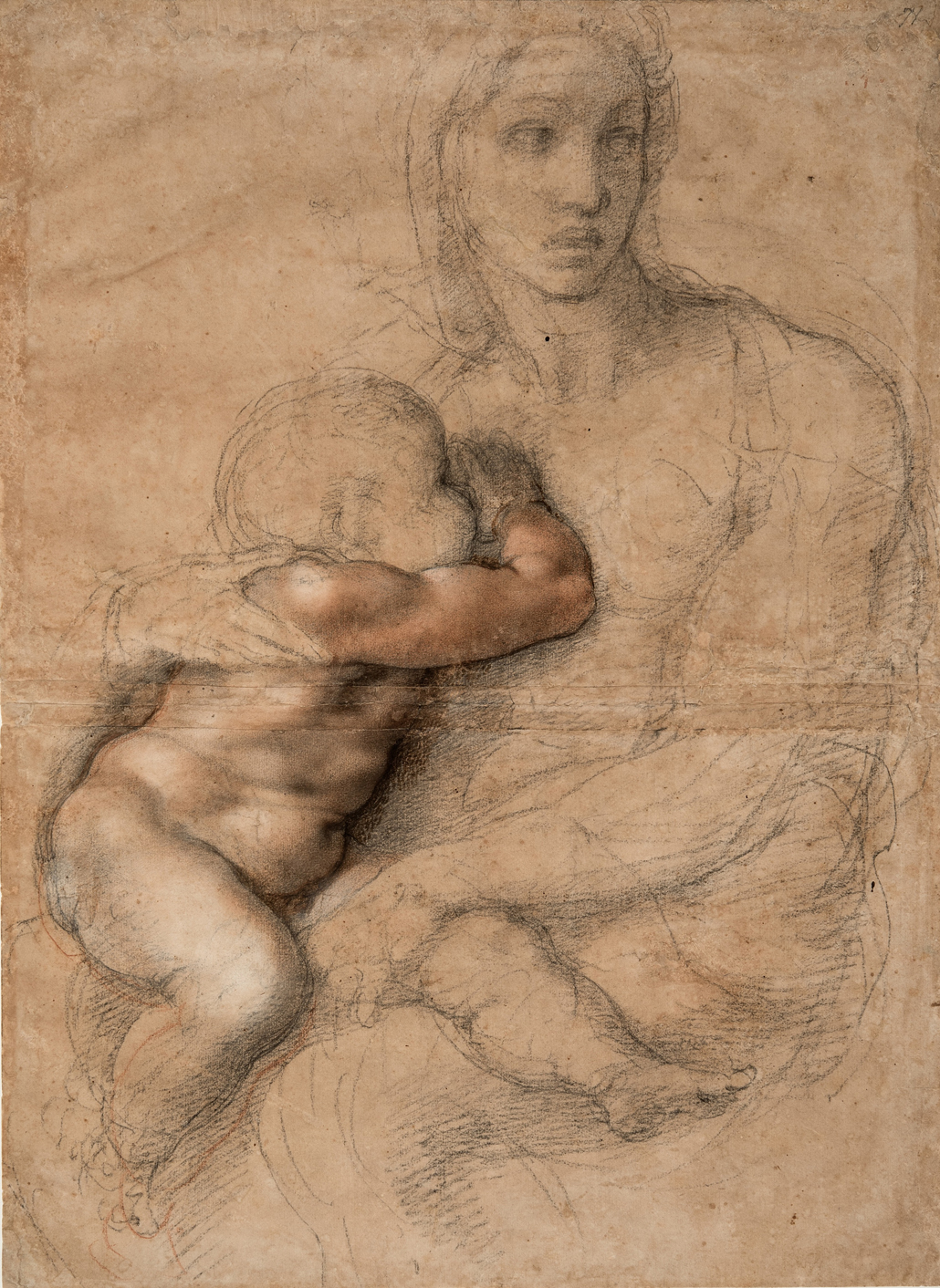 A sculptor, painter, poet and architect Michelangelo was celebrated in his own time by his peers for the power of his drawing and brilliance of invention. Although he considered himself a Florentine, he lived much of his life in Rome.

He maintained his high level of excellence in all the mediums he undertook for an extraordinary length of time, remaining at a pinnacle of perfection through out what is now recognised as three distinct design periods in history and a brilliant career. Through a number of ambitious projects he defined the excellence of art in his age.

His restrained take on classicism distinguished a transition from the Medieval period (500 – 1500) to that of Italian Renaissance art with his famous sculptures the Pieta, 1488–99, and the David, 1501–04, the latter becoming a symbol of the Florentine Republic. In his role as architect Michelangelo reacted against pure classical themes by setting columns back into the walls using elements, such as brackets as a distinctive and individual gesture, rather than solely a means of support.

He also skilfully grouped buildings together using sculpture in-groups and staircases to draw the spectator into what was an organized space.

His ‘mannerist’ style laid the foundations for the development and later flowering of a more fully developed seventeenth century style known as the Baroque, long after he had gone.

His poetry gave expression to the idea love will help humans to ascend to the divine.

No mortal thing enthralled these longing eyes
When perfect peace in thy fair face I found;
But far within, where all is holy ground,
My soul felt Love, her comrade of the skies:
For she was born with God in Paradise

Florence despite its basically medieval structure would always be thought of as a Renaissance city because of all its achievements in architecture, the arts and sciences. The humanists of the time ensured it became an example of an ideal city, the first since antiquity. The Tuscans are especially proud that within three generations they produced not only a great number of original thinkers and artists, more than any place of its size has ever done in a comparable period, but also enriched our modern world with such beauty, once seen can never be forgotten.

“… ne’er walked the earth a greater man than he.

The exhibition will be accompanied by a fully illustrated catalogue written by Carmen C. Bambach will include essays by a team of leading Michelangelo scholars.

It will be published by The Metropolitan Museum of Art and distributed by Yale University Press.

The Andrew W. Mellon Foundation has made the catalogue possible

A variety of Education programs will accompany the exhibition including Met Live Arts performances of La Dolce Morte, based on Michelangelo’s love poetry, and Shostakovich, Michelangelo, and The Artistic Conscience.

La Dolce Morte is made possible by The Howard & Sarah D. Solomon Foundation.

* Canto 1:1.34 Paradiso – of the Commedia by Dante Alighieri

**Giorgio Vasari; Lives of the Artists

A church or cathedral is made up of sacred shapes such as pointed arches, circles and ogee curves. The circle represents sacred order, the earth, sun, moon, planets and the whole of creation. The ogee shape derives from the architecture of Islam, which is abstract although fine and decorative, portraying…