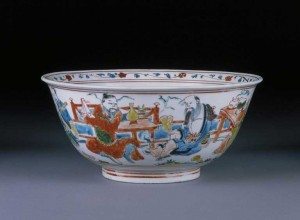 A description of the manufacture of porcelain in 1713 by French Jesuit priest Father D’Entrecolles, a resident in Peking, relates the firing of blue and white porcelain ‘A beautiful blue colour appears on the porcelain after having been lost for some time. When the colour is first painted on, it is pale black; when it is dry and the glaze has been put on it, it disappears entirely and the porcelain seems quite white, the colour being buried under the glaze. But the fire makes it appear in all its beauty, almost in the same way as the natural heat of the sun makes the most beautiful butterflies, with all their tints, come out of their eggs’. Blue and White wares would become the most popular associated with the Ming dynasty and China, although it was technological advances during the Ming period that allowed development of superb coloured wares as well.