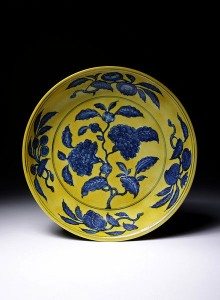 The description of the manufacture of porcelain written in 1713, by French Jesuit priest Father D’Entrecolles, resident in Peking, describes the seeming magic connected with the firing of blue and white porcelain. ‘A beautiful blue colour appears on the porcelain after having been lost for some time. When the colour is first painted on, it is pale black; when it is dry and the glaze has been put on it, it disappears entirely and the porcelain seems quite white, the colour being buried under the glaze. But the fire makes it appear in all its beauty, almost in the same way as the natural heat of the sun makes the most beautiful butterflies, with all their tints, come out of their eggs’. When the Emperor Wan Li sat on the throne of the middle kingdom in the forbidden city from 1573 – 1620, Elizabeth 1 was contending with Mary Queen of Scots. His reign mark of Wan Li is the most sought after of the Ming Period. Many of the wares were produced at Jingdezhen, where sixty kilns were working for the Imperial court and some of its most splendid plates were painted imperial yellow over the glaze which served as a ground colour for the designs that had been painted in blue under the glaze.

In an Age of Modernism most silver manufacturers at the turn of the twentieth century opted for the known over the unknown. Orthodoxy prevailed, even in an industry rapidly being overhauled by modern technological advances. Jules Auguste Habert Dys (1850-1924) was a notable exception. He was one of several metalworkers…