Australian Mirusia Louwerse on stage in The Netherlands

At marvellous Melbourne on Monday August 15, 2016, there was an advance on the transforming nature of Spring, as the delightful Brisbane based internationally acclaimed soprano Mirusia helped a huge audience make magical memories by presenting a variety of beautiful music from different traditions.

Those attending her two concerts at the Hamer Hall in the Melbourne Arts Centre started their week in style, as Mirusia provided a superb grand finale end to her full-scale national This Time Tomorrow Tour, which has been underway since May.

Her outstanding one-hour program of songs were selected from musical theatre, opera and both sacred and secular traditions. The songs she sang so superbly expressed the multiplicity of sounds admired in Australia today, as she wowed a crowd of some five thousand people. Mirusia sings Don’t Cry for Me Argentina from the hit musical, Evita

Mirusia‘s glorious voice resonated voluptuously in Melbourne’s premier concert venue, as she hit the high notes sublimely, supported with backing vocals by Keiarn Chesebro, a youthful soprano from the Gold Coast she is mentoring. An outstanding ensemble of very talented musicians accompanied her including on the Steinway Grand her Musical Director Graeme Press together with Dan Russell (The Australian Quartet) on Violin, globe trotting percussionist Luke Thatcher and on Flamenco Guitar Anthony Garcia.

They performed brilliantly to a crowd who were so obviously enjoying such sweet pleasure.

Live experiences of the ‘art of the voice’ are not always affordable today and I discovered half the people I talked to knew who Mirusia was, saying they have always wanted to hear her sing live but confessed they couldn’t afford big arena concert prices. Melbourne’s Morning Melodies held monthly at Hamer Hall are offered at a very affordable price, and by participating in such a worthwhile program, Mirusia gave many people an opportunity to fulfill their dreams.

They responded happily by flocking to the Arts Centre in their thousands.

Others confessed to being intrigued to hear this beautiful young woman they did not know about, sing and talking to some of these again after the show, they revealed they were in raptures, some standing for a long time in the foyer trying to take in what it is they had just witnessed.

I feel extraordinary said one, unable to express her delight with words. Yet another said she felt like she had seen ‘heaven’, high praise indeed.

Mirusia can at times still seem to me to be Australia’s best-kept secret.

She started her concert with a perennial favourite from the hit musical The Sound of Music. Her version of ‘My Favourite Things’ ensured the ‘almost’ sold out audience was immediately in the mood for her select program, which included favourites from two of her major CD’s This Time Tomorrow and My Favourite Things available on iTunes. The lovely Mirusia Louwerse in concert

What you do understand when you hear Mirusia sing for the first time is how at ease she is; her voice a natural expression and extension of her own personal passion for music and optimistic love of life.

She has the ability to embrace different characteristics of the soprano voice; agile enough to sing its very complex movements, powerful enough to encompass dramatic performance, while lyrical and flexible enough to showcase multiple personalities.

Creativity, control, depth and integrity were terms that came to my mind as we experienced her superb rendition of ‘Don’t Cry for Me Argentina’, from the musical Evita, which came next. Mirusia on stage in Amsterdam with violinist and conductor Andre Rieu

Her flawless, fearless delivery allowed us all to see why Andre Rieu had her sing this wonderful composition by Andrew Lloyd Webber with lyrics by Tim Rice when he played the violin to accompany her as she sang it for the coronation of the King of the Netherlands, Willem-Alexander in 2013.

Her incredible vocal virtuosity was showcased in solos with Anthony Garcia performing stunningly on his Flamenco Guitar.

To coin an old phrase they ‘knocked everyone’s socks off’. What a combination they proved to be, especially the sublime rendition of Cavatina, a classical guitar piece composed in 1970. Mirusia and Anthony Garcia, rehearsal on the road…

Set to lyrics by Cleo Laine in 1973, many tears gushed forth around me as she sang… He was beautiful, beautiful to my eyes, From the moment I saw him sun filled the skies…

Their thought provoking rendition was ethereal, elevating everyone onward and upwards as Mirusia immersed herself completely in Anthony Garcia’s glorious playing of the music’s sweet sounds.

She revealed the glories of the top aspect of her voice, which is both fresh and bright, while lower down it takes on rich, solid colours that are very appealing. Marriage is a sacred rite in most religions of the world and brings grace to those participating in receiving it.

Having married during the past year, her performance presented as a restrained but heartfelt outpouring of emotion, one that was deeply personal and one everyone present felt privileged to experience. Love was definitely in the air.

Mirusia and her protege Keiran also sang a lovely duet together – Pie Jesu, and I don’t think after that there was a dry eye in the house.

A happy sing-along element is an absolute requirement of the producers for behind the Morning Melodies, and Mirusia’s version of Waltzing Matilda and the Ay Yi Yi chorus from Cielito Lindo, a happy traditional Mexican melody translated as ‘Lovely Sweet One’, filled that bill with everyone joining in jubilant style. Mirusia asks, who will come a Waltzing Matilda with me…

One of her two encores was a heart-wrenching rendition of the very sacred Ave Maria, which revealed her raison d’etre and courage.

Dutch entrepreneurial entertainer violinist Andre Rieu invited Mirusia to come to Europe to appear on his concert stage a decade ago and since then she has introduced millions of people to the art of opera, the art of musical theatre, the art of traditional music, the art of sacred music and glorious modern and contemporary secular works.

Today she is all about raising an awareness of how the arts in all their forms contribute to our very special cultural diversity and can only but benefit society as a whole by exceeding the boundaries musical ‘purists’ impose.

Mirusia has gained a huge following world wide, appearing on many of Andre Reiu’s CD’s while producing her own solo albums. One of these, Always and Forever went to #1 on the Pop Charts in 2008 in Australia. Mirusia was graduating from the Conservatorium of Music in Brisbane a decade ago when we first met, going on to become the youngest soprano to be awarded the Dame Jane Sutherland Opera Award in 2006. As one of her ‘old fans’ it was indeed wonderful to catch up and see how far she has come.

The art of the singer in the operatic genre traditionally has been subjected to complete and rigorous education; dramatic expression, musical theory and composition, which are important, as indeed is attaining virtuosity. It is the sort of education she enjoyed.

In our progressive society today change is constant. We need to be able to embrace it because if we don’t the art forms we cherish and seek to keep close will both suffer and disappear. 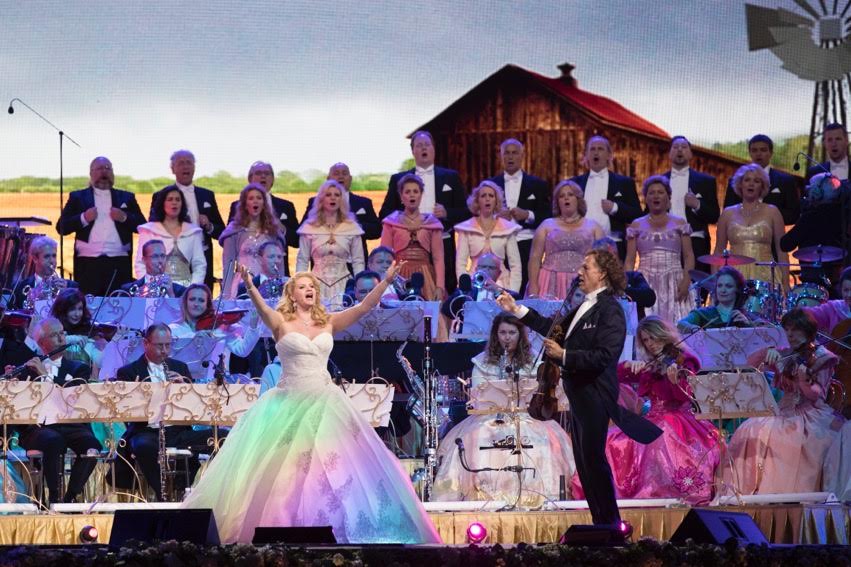 Mirusia, on stage with Dutch violinist and conductor Andre Rieu, 2016

The elite form of art as expressed by the soprano voice, and all the relative voices that suit the operatic, sacred music and classical genre, must always continue to deliver excellence as a norm.

If they feature wonderful works that stand the test of time they will become part of future traditions.

I am sure Mirusia when all those at your Hamer Hall, Melbourne concerts in 2016 look back on the occasion, they will definitely smile and feel happy. Mirusia, the voice of an angel

All the people I spoke to in the foyer afterwards, who were flocking to have their CD’s and DVD’s signed declared Andre Rieu was right, you truly are the Angel of Australia.