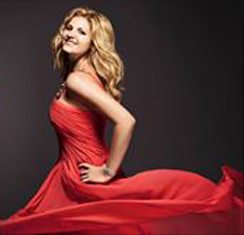 Internationally acclaimed singer Mirusia, the Australian born daughter of Dutch emigre’s who live on the Gold Coast in Queensland,  is often claimed by the Dutch people as their classical superstar.  It’s not suprising, she’s sung there more than she has here at home in Australia.

Mirusia  was named by acclaimed violinist and conductor Andre Rieu as the Angel of Australia when she first joined his world famous troupe. She is currently completing her first national solo tour at home: This Time Tomorrow, performing a program which people in The Netherlands have already taken to their hearts.

Enchanted by the beauty of the internationally acclaimed singer Mirusia’s voice and appearance, a member of the audience attending her This Time Tomorrow concert at Veenendaal said “Thanks Mirusia, you have given us “hope for a better tomorrow”. He had just heard her sing ‘Don’t Cry for Me Argentina‘, which internationally renowned Dutch violinist and conductor André Rieu chose for her to sing at the Coronation Concert for the King Willem-Alexander of the Netherlands and his consort, Queen Maxima in 2013.

It is one of the most powerful emotive songs from Andrew Lloyd Webber and Tim Rice’s musical Evita, which tells the story of the ‘spiritual leader’ of Argentina, Eva Peron. Mirusia’s version is truly sublime. Her glorious version of Ave Maria by Franz Schubert has over 27 million views on You Tube and her repertoire for This Time Tomorrow features songs from all her award winning albums.

Mirusia is the only classical Australian artist, who is internationally renowned, with an ARIA No. 1 Chart Award for charting at Number One on the ARIA Classical and Pop Charts. Her voice should not be constrained by boundaries of classification, nor should her opportunities. It’s a voice for everyone to admire and enjoy.

It is pure; renowned for its clarity and sheer beauty, one originally shaped at the Queensland Conservatorium of Music to go on and win the Dame Joan Sutherland Opera award, its youngest winner ever.

The International Ambassador of the Australian Children’s Music Foundation, Mirusia is touring nationally – all over Australia in suburban, country and city locations –  until mid August. Find a Venue | Buy Tickets

Being the spare heir George VI and his family, contented country folk were thrust into the limelight of city and royal life, where they would find their destiny