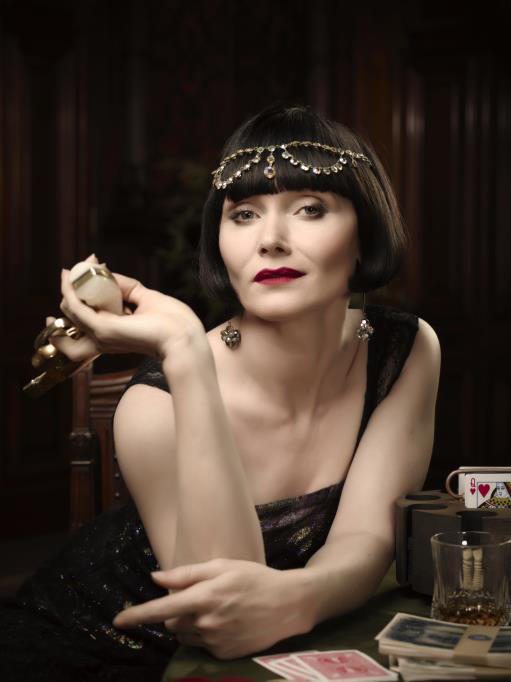 Frocking up and fighting crime with a pearl handled pistol while looking as if you just stepped out of the pages of a 1929 fashion magazine is both a challenge and delight for actress Essie Davis, who is otherwise known as Miss Fisher to her many fans.

Davis has brought Australian author Kerry Greenwood’s character the super sleuthing woman detective Phryne Fisher with the ‘dagger sharp wit’ not only to scintillating life with her very stylish acting, but also into the realm of reality with considerable panache. Fans adore her.

The independent, glamorous and unflappable leading lady detective leads everyone, especially Detective Inspector Jack Robinson (Nathan Page) on a merry kind of chase, one that requires expert sleuthing and derring-do if she is to win out in the end.

There is no doubt the costumes are integral to the success of the show.

That includes the superb jewellery Miss Fisher wears as she enjoys every moment of her ‘lucky life’. Visually the series is sumptuous.

To be held at National Trust Rippon Lea Estate in Melbourne from 1 May to 30th September, there will be a curated exhibition of the splendid ‘deco’ inspired costume showcasing 50 stunning pieces worn by cast members. Designer Marion Boyce created the costumes for the upcoming 2015 third TV series of Miss Fisher’s Murder Mysteries, produced by Every Cloud Productions based on Kerry Greenwood’s great book. It commences on ABC TV on Friday 8th May, 2015 at 8:30 pm.

The partnership with The National Trust of Australia (Victoria) has proved a fruitful one for all parties as their heritage locations are showcased constantly to ‘audiences around the world.’

The producers Fiona Eagger and Deb Cox observed they are incredibly grateful to the National Trust for enabling them to film so many important moments from Miss Fisher’s Murders Mysteries in the Trust’s truly magnificent buildings, including Como House, Rippon Lea and Labassa. The exhibition also coincides with the inaugural ‘Festival of Phryne’, a fabulous series of events presented by Every Cloud Productions throughout the City of Melbourne throughout May and June 2015, celebrating the world of Miss Fisher’s Murder Mysteries.

The show has huge following of fans and has captured the public’s imagination.

There were very loud protests at the announcement of one of the most successful shows the ABC has ever screened ending last year, ensuring its return.

There will be a focus on the inspiration, research and production that contributes to the show’s costume evolution and success. Everyone it seems just loves the ‘art deco’ streamlined styling of the series.

Themed rooms will complement the behind the scenes atmosphere, including interactive displays.

Guests can design a 1920’s themed gown themselves as they gaze longingly at the props and furniture from the set of the series.

At the exhibition you can try on replica costumes and interact with props and furniture from the show as you step deeper into Phryne’s world.

If solving crime is what you would like to do you can search for clues supplied by Detective Inspector Jack Robinson. “We are thrilled at the enormous success of the previous Miss Fisher’s Murder Mysteries costume exhibition hosted by the National Trust which allowed thousands of our show’s dedicated admirers to appreciate Phryne Fisher’s stunning wardrobe and the work of our amazingly talented costume designer Marion Boyce,” Every Cloud Productions’ Fiona Eagger and Deb Cox said. Everyone is ecstatic she’s back.

Phryne has certainly captured the nation’s attention as she treads the cobbled byways of Melbourne from its hidden city lanes to its stained glass lit arcades where high tea is served in superb style.

She keeps all of her admirers following in her wake as she infiltrates either the world of academia or that of a brothel keeper with equal elan, all the while dancing deliciously around her ongoing relationship with DI Jack.

During the 1920’s and 30’s design explored linear, vertical and horizontal ornamentation, occasionally softened by curves. Jewellery in the Art Deco style was characterised by its wonderful explosion of colour, despite a vogue for black and white inspired by the Exposition de Galliéra of 1929.

Jewellery manufacturers had a whole new range of unusual stones and metals to service their artist’s imagination and capture their client’s attention.

“We can’t wait to show off our beautiful costumes from series three at the 2015 exhibition and look forward to its National Tour.

We are also very grateful for the passionate support of our dedicated fans. The exhibition is a wonderful opportunity to give them some real insights into what it takes to make a show like Miss Fisher” the producers also noted. Essie Davis is Phryne, teasing and tantalising us all with her considerable charms and her glorious costumes will be sure to inspire many more young people to buy ‘vintage’. Glamour is the only way to go…

Miss Fisher’s Murder Mysteries’ costume designer and recent winner of the 2014 AACTA Award for Best Costume Design in Television, Marion Boyce, said “Miss Fisher’s Murder Mysteries is a costume designer’s dream job, and particularly for me as I have an abiding passion for the period. The costumes are such an integral part of the whole look and feel of the television series and I know from the fan mail we receive, just how much our viewers love Phryne’s wardrobe,” Marion said.

As part of the ‘festivities’ in Melbourne a number of public programs will run during the exhibition period (1st May – 30th September 2015) including Afternoon Tea at the Windsor Hotel plus a Walking Tour around that historic precinct.

There will be High Tea at the glorious National Trust mansion Labassa at North Caulfield, which friends and fans of this opulent house may recognise as the ‘hotel’ in London Phryne stays at in the all-new 2015 series. Then there will be a Murder Mystery Dinner Party at The Windsor Hotel, Miss Fisher’s Murder Mysteries Speakeasy at the Old Melbourne Gaol, and a night of Miss Fisher’s evocative music at the Arts Centre.

All will be sure to grab attention and fuel the fire of fashionable places to be see and be seen and who knows whether or not the lady herself, the lovely Phryne Fisher may just turn up in person to WOW the crowds.  Investigate NOW

The series is sold to over 120 territories and brings together two of Australia’s leading drama creators.

Debbie MacKinnon and Fiona Verity at me artspace present an exhibition of new works by me, her and us, displaying their individual and their collaborative works