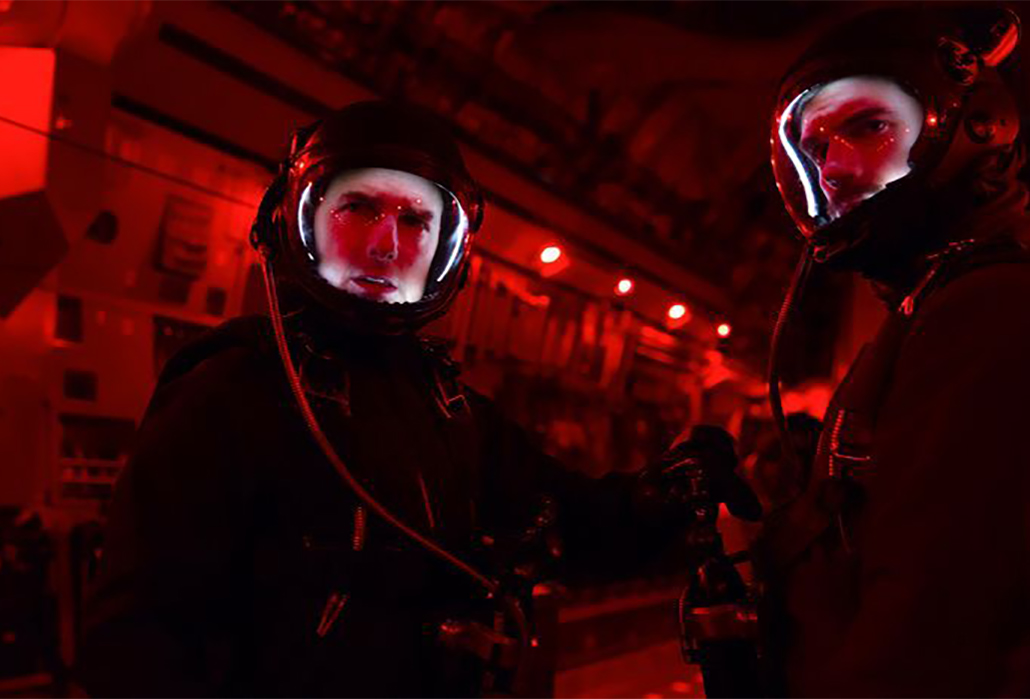 There is no doubt it’s not only his best movie in the franchise to date, but also perhaps one of the best real live action films of all time. This is a five-star turn, with our hero at the top of his game, performing all of his own stunts. 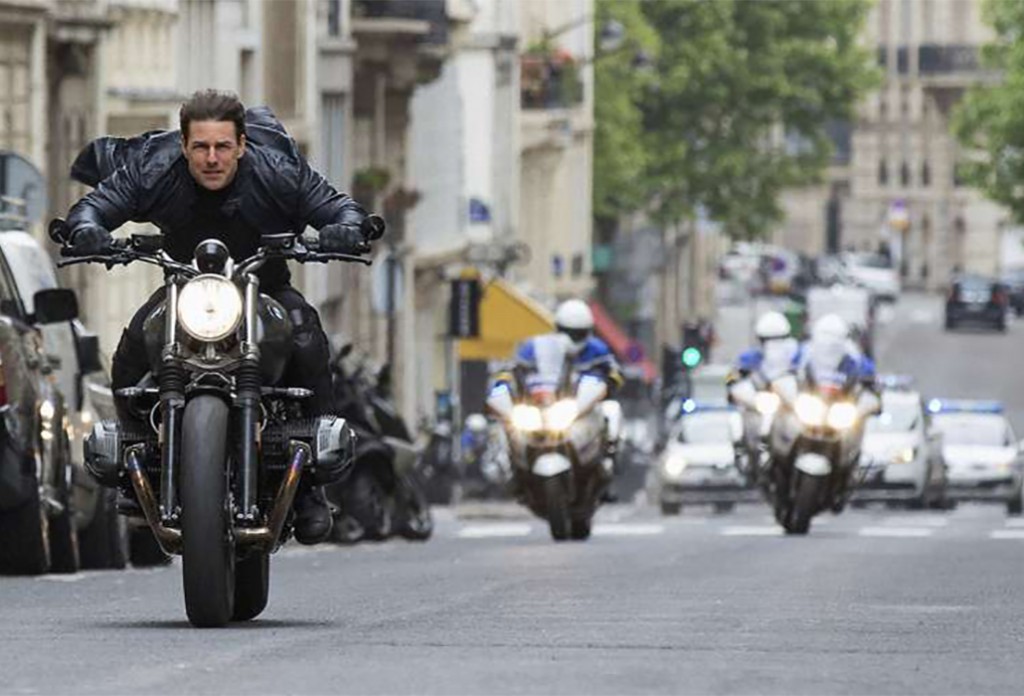 Mr Cruise leaps, rides, drives, runs and flies through the air in invincible style. Down on the ground though now we know he’s human after all, because he’s at least showing some signs of physical wear and tear (he is 56 after all).

This includes limping when he breaks his foot leaping from building to building as he vigorously chases down the villains who are seeking to destroy the world as we know it. 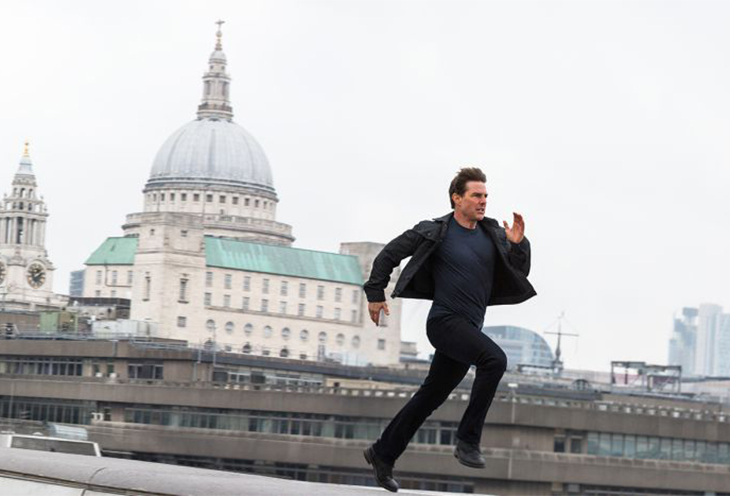 The rest of the time he’s running flat out across the rooftops of London his race against the odds from St Paul’s to the Tate Modern is so impressive. We are all out of breath a long time before he is.

This is the second film in a sequence, following on from Mission Impossible – Rogue Nation meaning the slithery villain plus Solomon Lane (Sean Harris) is back once more.  He and his colleagues are using their wealth as sponsorship for a World Health Organisation so he can manipulate from prison, the outcomes he wants to happen. 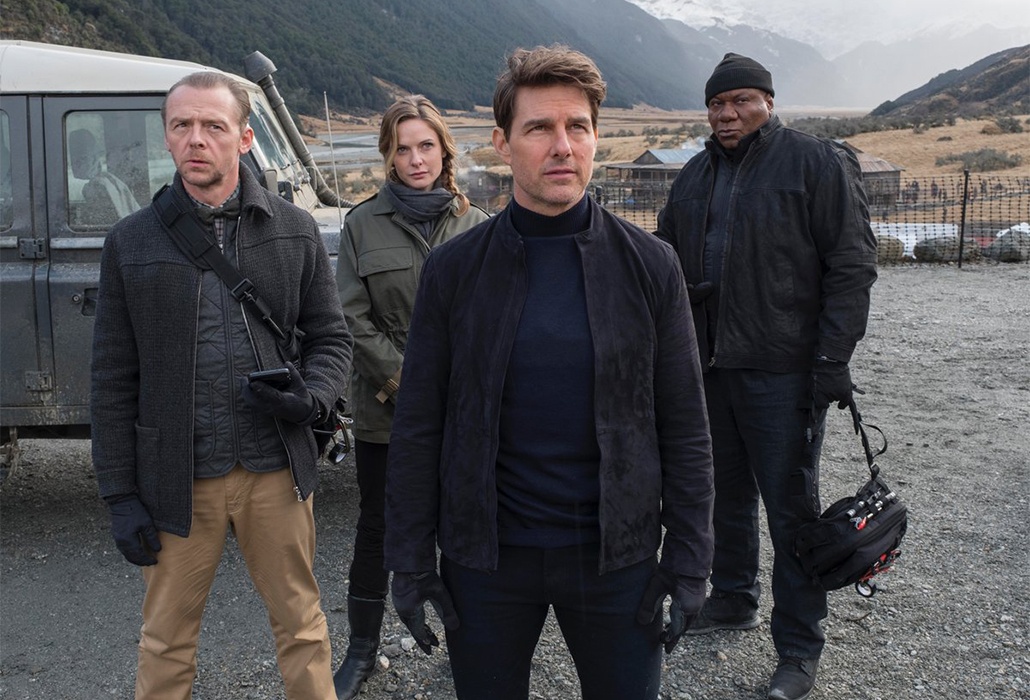 Foiling all his attempts however are the IMF team. Ethan doesn’t operate alone, they look out for and after each other.

Do Not Read Any More If You Don’t Want Spoilers 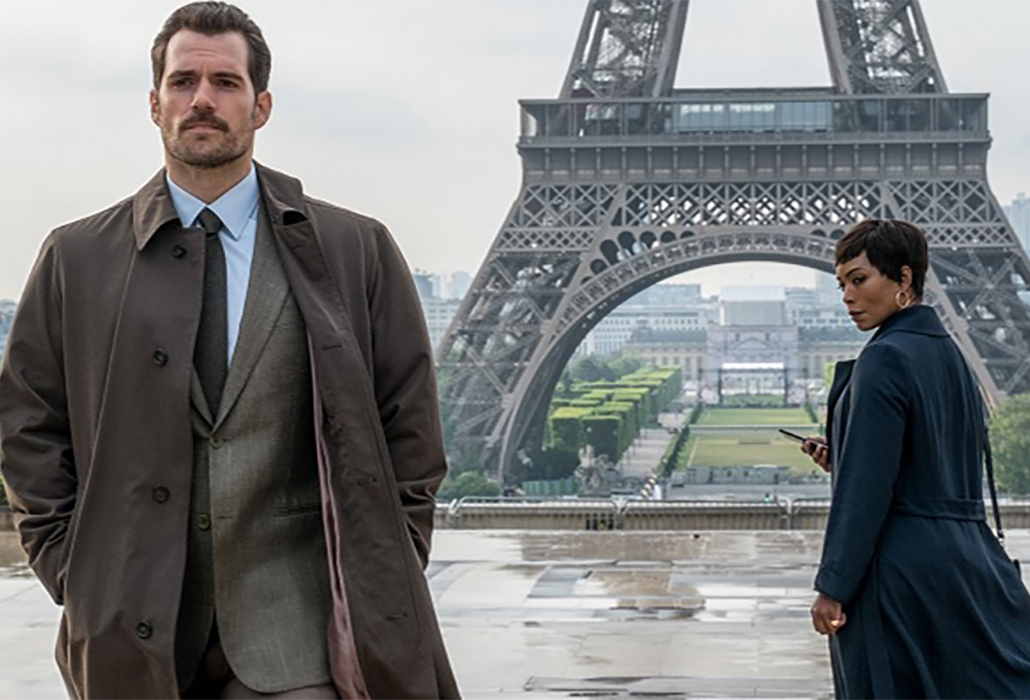 Mission Impossible: Fallout is filmed spectacularly in Paris, London and in the mountains of Kashmir. I cannot ever remember Paris looking so amazingly beautiful in any other film.

Shot from the air, through the rhythmic columns of its eighteenth-century architecture and stylish collonades as well as the shaded beauty of the allees of pleached mature trees of the Place des Voges in the Marais, with the Eiffel Tower and Grand Palais featuring spectacularly. 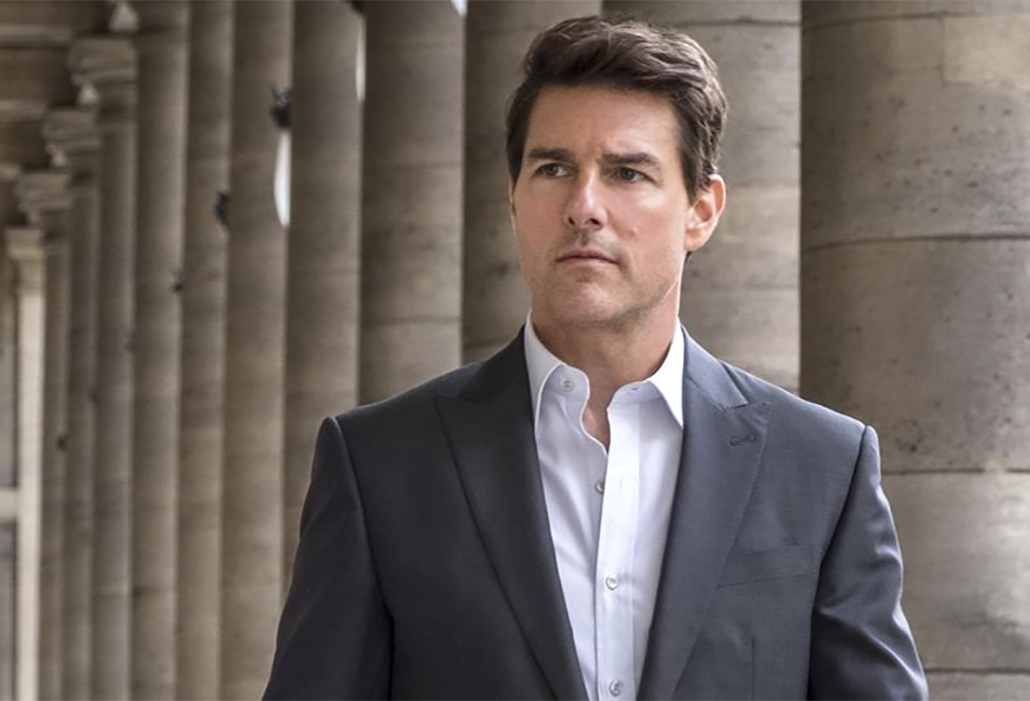 The Grand Palais is a wondrous Beaux Arts structure between the Champs-Élysées and Seine River in Paris, purpose built for the 1900 Exposition Universalle. Its 200-metre-long x 45-metre-high dome shaped conservatory style glazed roof proves an impressive complex both night and day, providing one of the most amazing of all places for our hero to arrive by parachute.

Ethan Hunt and his team are again watched over by Mr Secretary Alan Huntley (Alec Baldwin) with his reliable trustworthy agents in the field Luther Stickell (Ving Rhames) Benji Dunn (Simon Pegg) along with Ilsa Faust (Rebecca Ferguson) along for this action packed ride.

The White Widow a new adversary is played with conviction by Vanessa Kirby (The Crown). Another welcome addition as is Angela Bassett as Erica Sloan, a CIA agent less than impressed by the IMF. Ethan’s former wife, Julia (Michelle Monaghan) is back as a target in an act of revenge.

Lisa is a great asset. 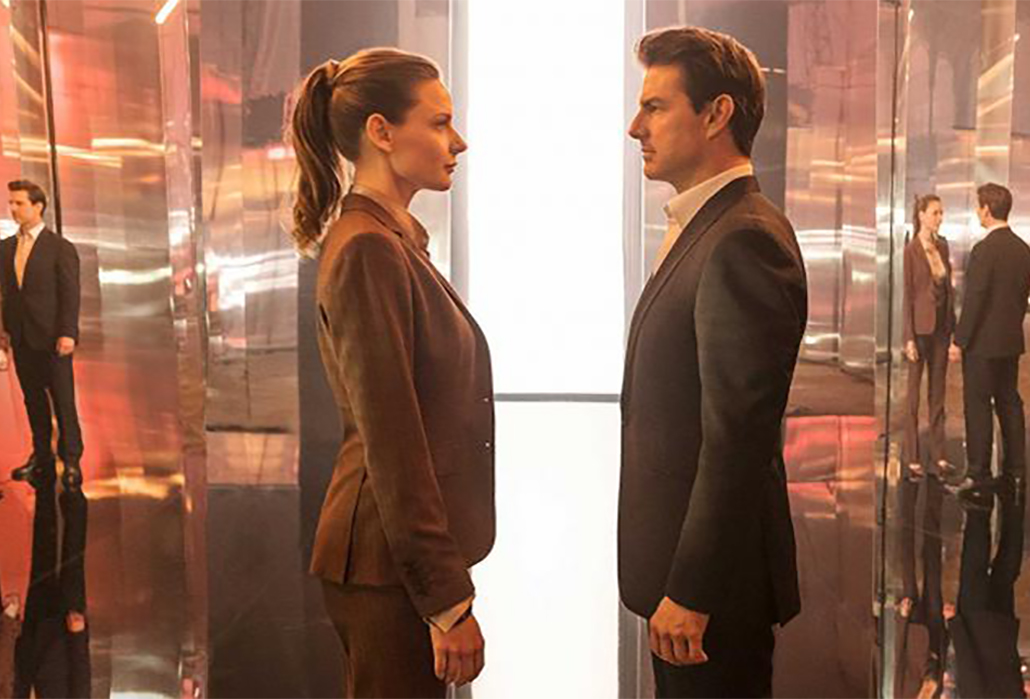 She is still giving Ethan Hunt trouble, courtesy of British Intelligence who have her on a tight leash. When needed, however, she is out there on the sidelines wearing leathers and riding a bike, from which she can either step in and help to save Ethan, or to help him to save the day.

The script is tightly woven, full of twists and turns that keep the team, and the audience, on their toes with the action full on. Ethan against his wishes has an additional member of the team, CIA agent August Walker (Henry Cavill). They are both involved in a final fight scene, which is alone worth the price of the ticket. 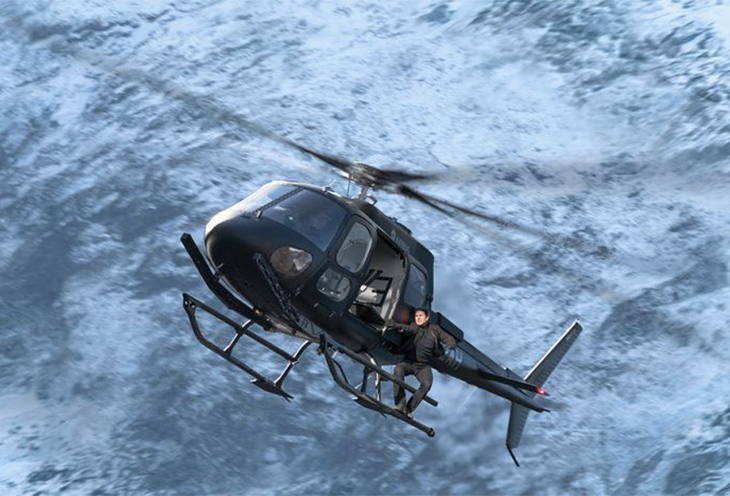 It involves flying helicopters through narrow gorges formed by snow-capped mountains, as a countdown to nucleur annihilation is happening while the rest of the team are fighting to win against all the odds. They do however require the last second intervention of their leader.

After I had calmed down and sat with a coffee in reflection, it felt at the end, like a new beginning for the team. 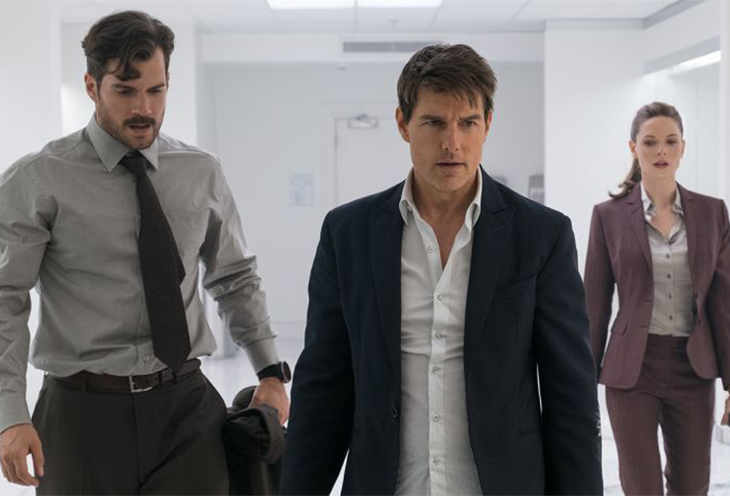 So, it will be interesting to see what Mr Cruise plans next… oh and there are so many surprises your head will spin and your heart will race so, be prepared.

With defining direction and earnest commitment from all the actors, Mission Impossible: Fallout is a highly recommended thrill a minute ride.
5/5

In the Queen’s Gallery at Buckingham Palace in 2015 a show of paintings, botanical studies, manuscripts and more will be devoted to ideas of painting paradise