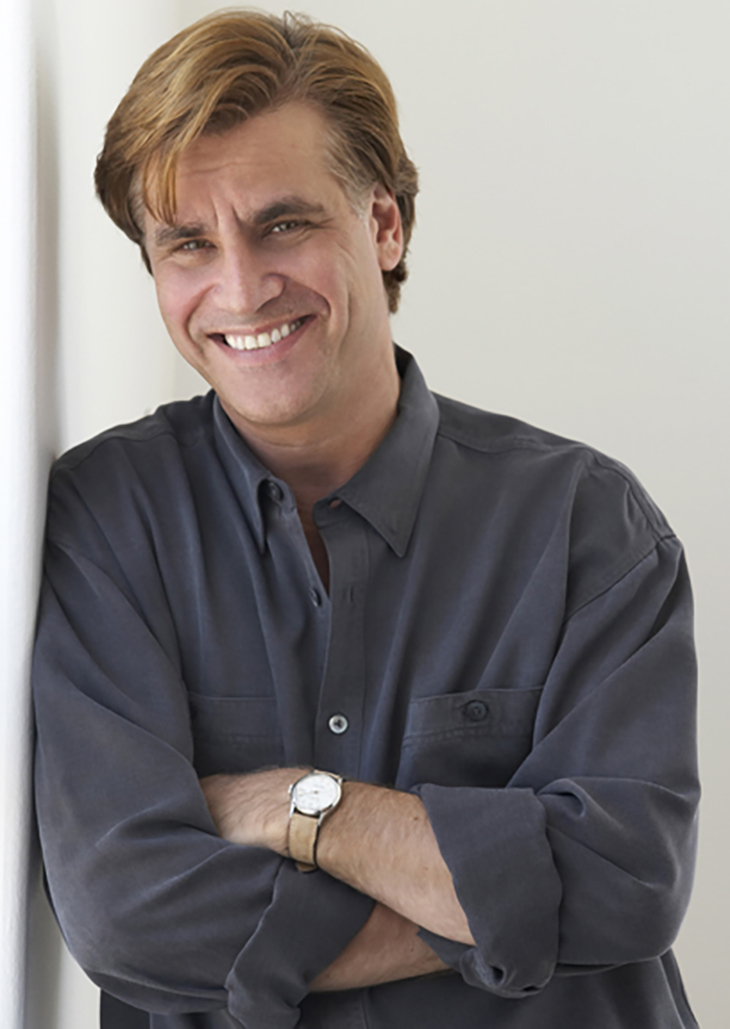 Based on the true story of American entrepreneur Molly Bloom and shifting from the ski slopes of the past to the present and The Rink for skaters at Rockefeller Centre in New York City, Director, Producer, Playwright and Scriptwriter Aaron Sorkin, (Steve Jobs, A Few Goodmen, The Social Network and The West Wing) is renowned for his amazing fast-talking and walk and talk scenes of dialogue.

He dazzles during the opening scenes of his latest film Molly’s Game, as Molly Bloom (Jessica Chastain) gives us a run-down of some of the defining events of her life during the first minutes, leaving us all completely breathless in admiration.

The complexity of the characters and strength of the cast in Molly’s Game is part of its appeal, as this beautiful young woman due to the circumstances of her life finds herself in a position of power over men. 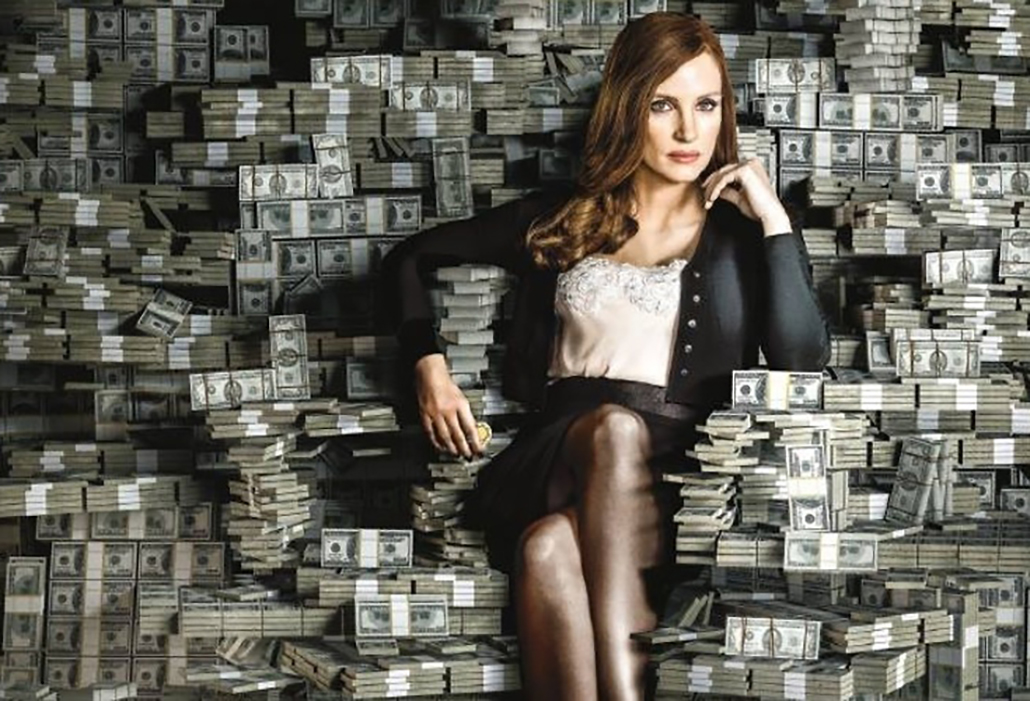 Raised to win, she is running a high stakes private underground poker game, one that expands way beyond her entertaining expectations, to become not only the biggest in the world, but subsequently perhaps the most dangerous.

Actor Jessica Chastain is superb as Molly Bloom, the girl who grew up with the high hopes of her high achieving family demanding that she concentrate on qualifying for skiing at the Olympics. 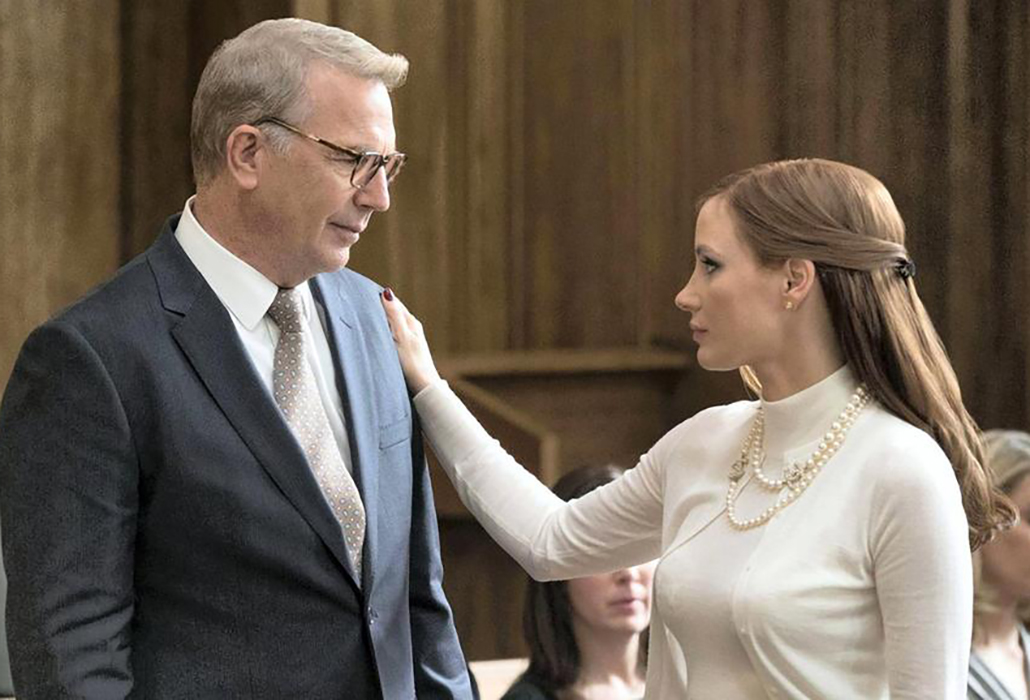 It’s a hard road for any athlete, particularly one who had a curvature of the spine, which had to be pinned back with steel rods so she could  stand straight to start with, let alone ski at Olympic standard.

On top of that, Molly experienced a freak accident during her Olympic trials, which finally broke her spirit and her relationship with her father Larry Bloom (Kevin Costner), which she needs to mend. 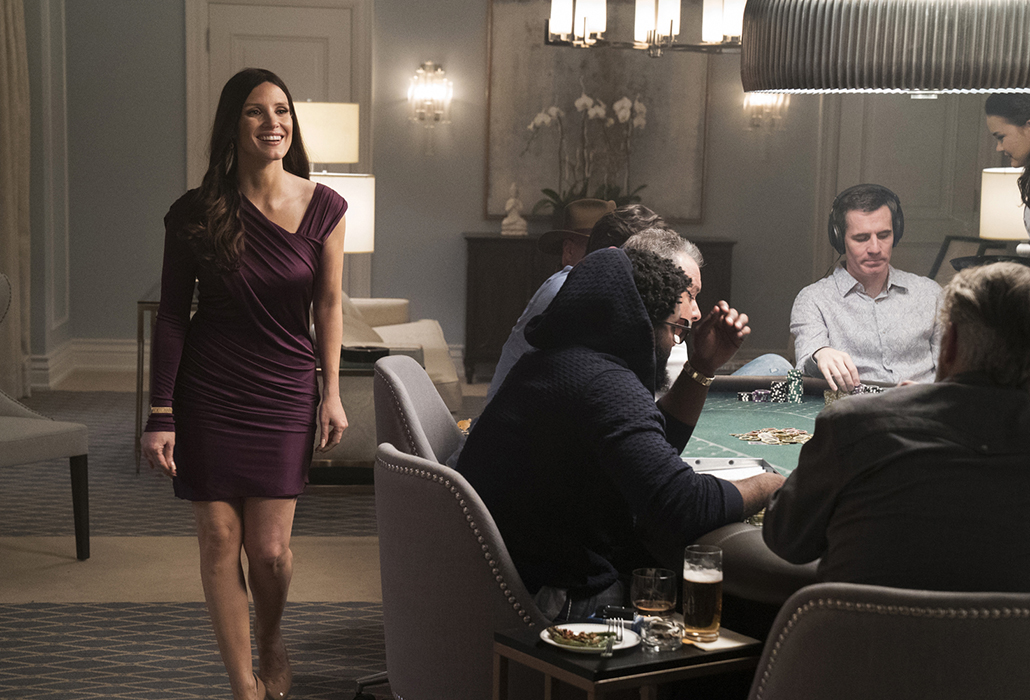 Finding herself out of favour, out of sorts and out of step with her father and family and feeling a failure, Molly bottoms out in the city before rising up to once a week for her bully of a boss, a shady character named Dean Keith, run a poker game full of big league players, including many well-known celebrities.

Young and naieve at first, but using her multi tasking skills to co-ordinate and craft an event that proves successful for him and learning a great deal along the way about how to a walk, to dress and to talk, things after a while take a turn for Molly Bloom.

Her misogynist boss finally realises his assistant is taking home very big tips, more than he pays her to work for him. He brings her involvement with ‘his game’ to a sudden and decisive end, wanting to put her back in her place. For her perhaps it’s a blessing in disguise. Only time will tell if she’s played the right hand. 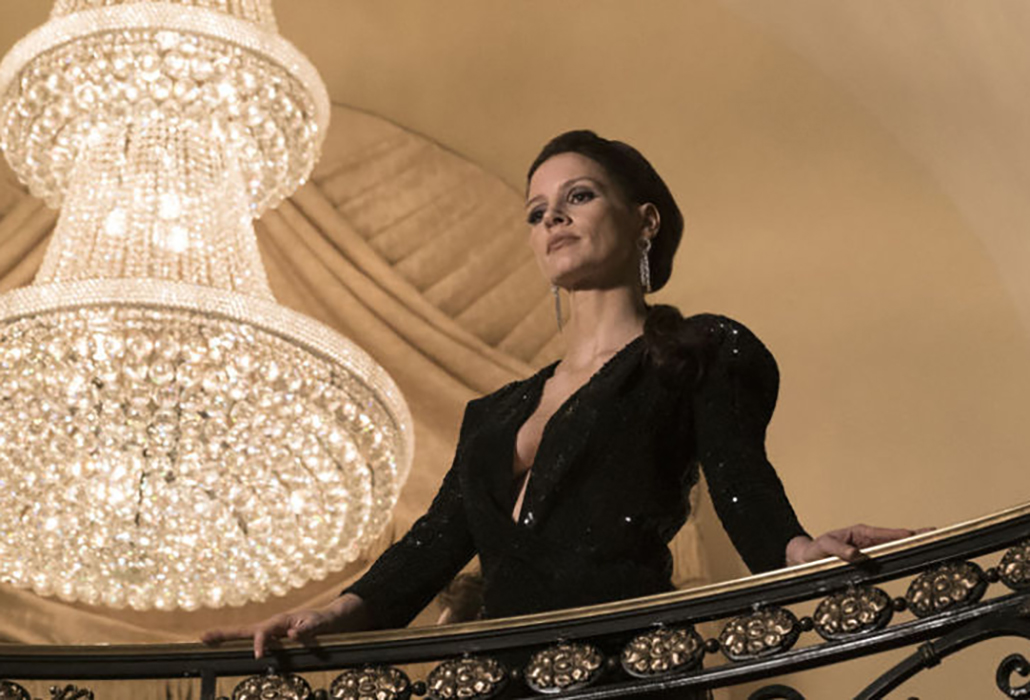 Not to be outdone, and now hooked on the lifestyle the game offers her and having a lot of the players on her own list of contacts, Molly decides to take the ‘game’ from the seedy atmosphere of the Cobra Club, upmarket to a new venue.

She begins running it in a suite of an exclusive luxury hotel, serving top of the pops canapes, cocktails and high class booze while employing other professional ladies to be involved with her and to help her expand the client list.

Molly Bloom manages this ‘man cave’. She wants to keep it high class and above board, because she has an integrity about how she deals with her players; purely professionally, and some admire her for it.

However finally after living the high life herself for quite a while, she enters the truly big league, with the Russians getting involved and it all begins to unravel. 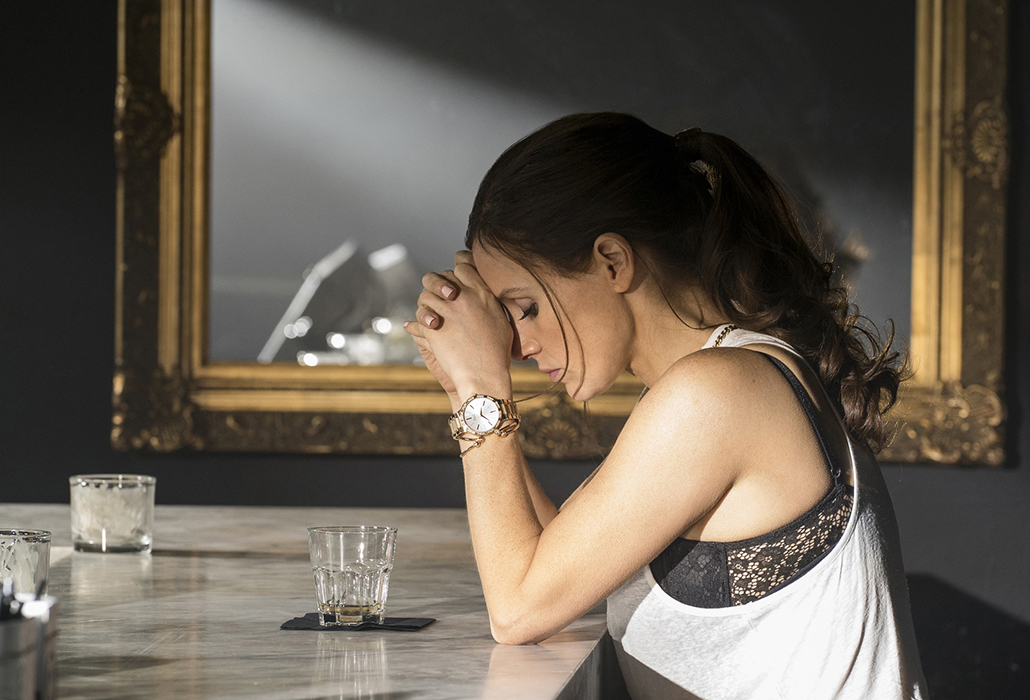 This is not a pretty story… one that speaks to a woman working only with her wits, who eventually succumbs to the temptation provided by booze, drugs and rock and roll, until she’s beaten half to death and cannot report the crime to the police without incriminating herself.

Trying to keep the ‘game’ legal as long as she was running it, Molly finds herself now needing an expensive lawyer, as the local law enforcement and the FBI close in on her for her connections and information. They cannot believe she’s truly ‘above board’.

She needs someone who can win her case, although has no money to pay for services rendered, despite having just published a successful book about her life. 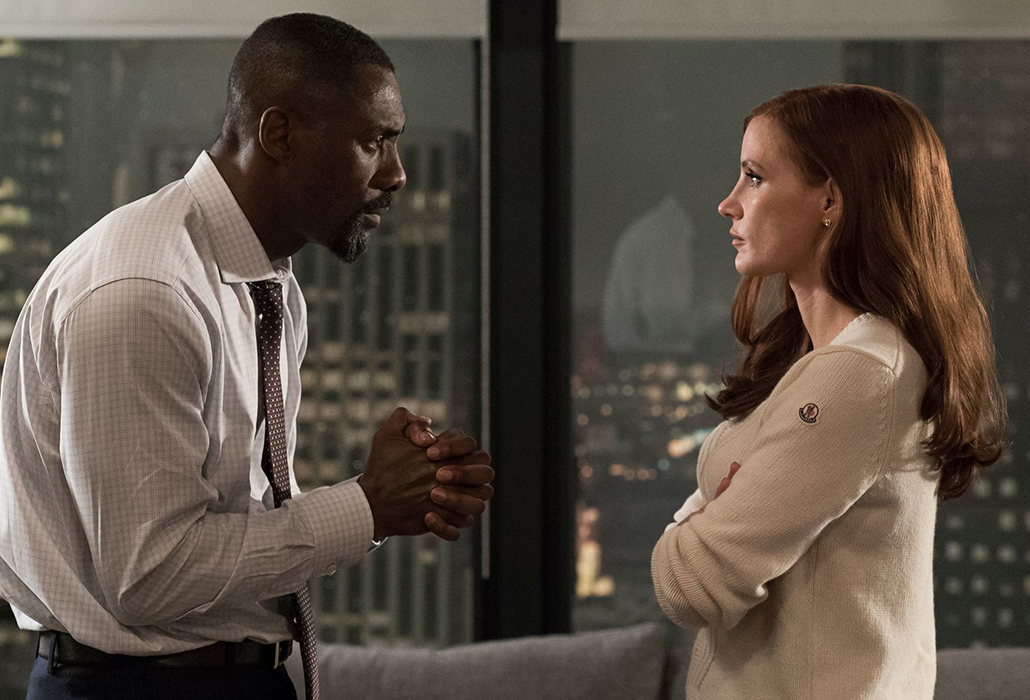 Idris Elba plays the lawyer she finds Charlie Jaffey, a fictional character who becomes caught up in the emotion of working with his very beautiful client, at first because his teenage daughter admires her so much and has read her book.

As Charlie learns more and more about Molly and her story, he becomes addicted himself, trying to saving this very beautiful client he so admires from going to prison.

This is high-class drama with many aces in the hole. Idris Elba, Kevin Costner playing Molly’s father Larry Bloom, Michael Cera as Player X, believed to be based on that ice cool actor Tobey McGuire (Spiderman, The Great Gatsby), and Brian d’Arcy James (Spotlight) as a very winning, Brad. 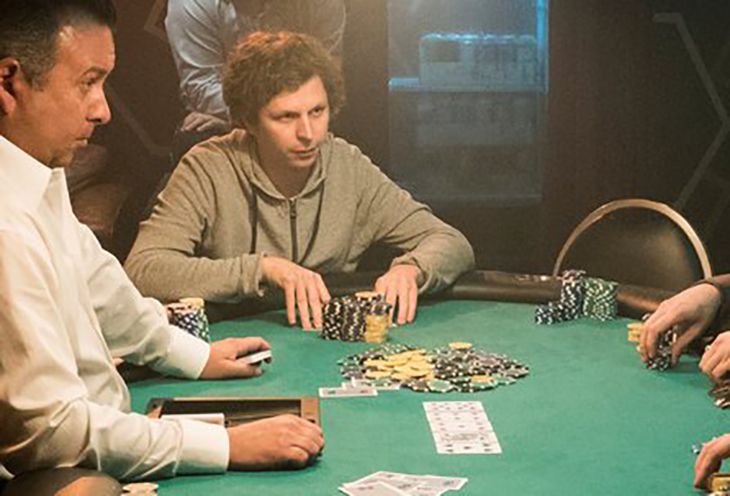 If you are a lover of ‘poker’ you will be in your element, as the stats and trivia about the game and the strategy and skill required to play it, both tend to captivate and intrigue.

In this you can virtually watch the player’s minds tick over as they back their play or enact an outrageous bluff. Hopefully you also realise that at the end of the day, Poker is really a game of chance on which anyone can become easily hooked. 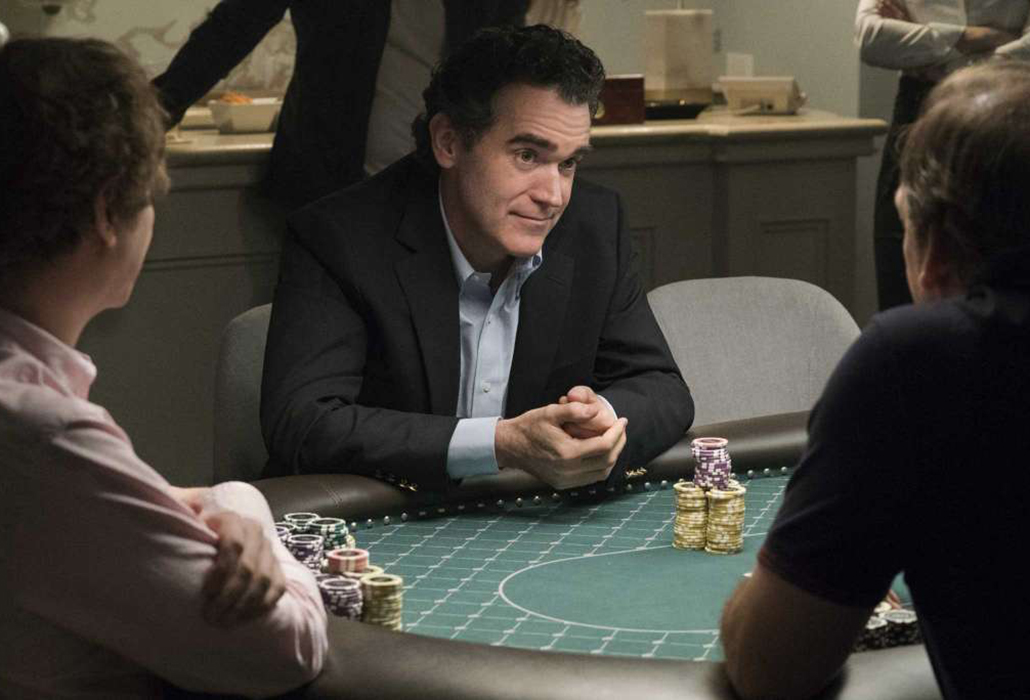 Must say I enjoyed it courtesy of my father, who loved his regular Thursday night (pay day) game of poker. He had a mathematical mind, which he passed onto my brother and I, teaching us to play poker and gin rummy at an early age, because he wanted us to learn to understand how numbers could and can be manipulated.

What he didn’t realise was that on the nights he came home without any money from his pay packet to buy the family food for the following week,  I had to go up the back stairs for my humiliated mother and borrow money from my sister to help her out.

In so doing he taught me another lesson. Poker is just like all games of chance, it can take away both your dignity and your soul and is like all other forms of gambling, to be resisted at every level of your being. 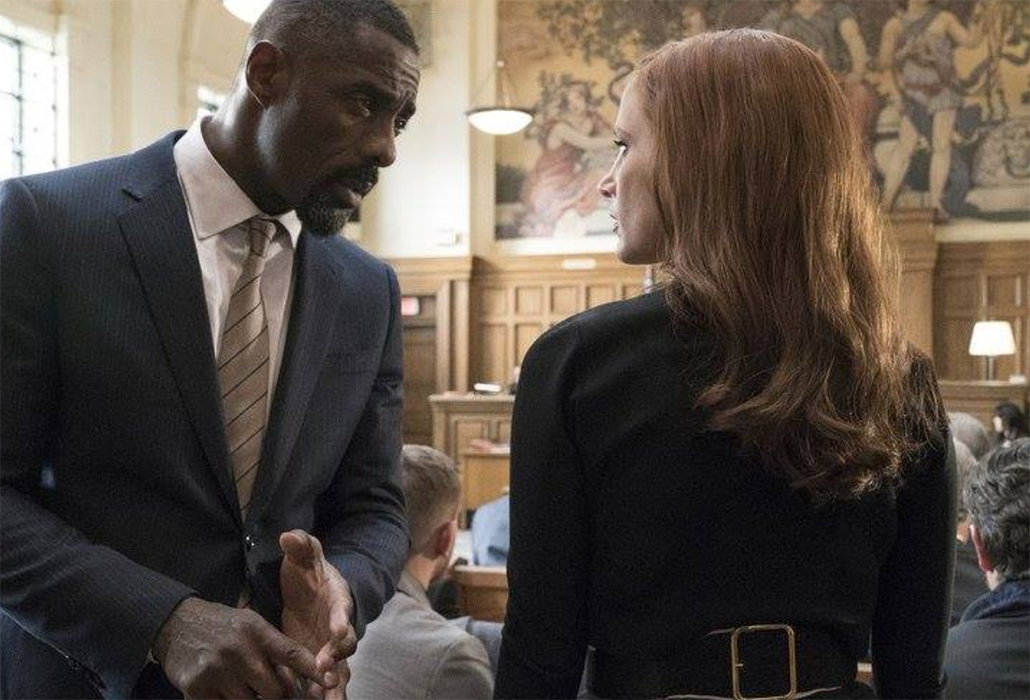 Molly Bloom basically ends up believing this and knowing it too and she fights tooth and nail to retain her own good name. 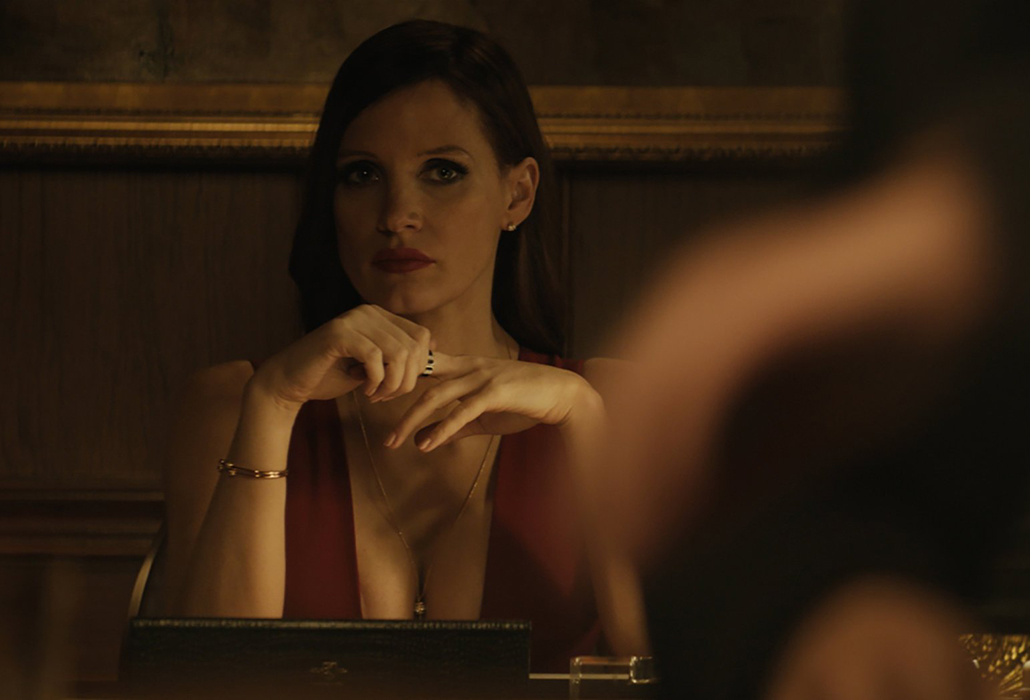 Jessica Chastain is a young actor I very much admire – although I don’t think we have yet to see at her perhaps at her absolute best. In this, well she comes pretty close.