Two centuries after the luminous enchantment of seventeenth century French artist Claude Lorrain (1600 – 1682), who placed classical ruins in an idealized landscape one that used light and shadow to depict morning, noon and evening, came the renowned French painter Claude Monet (1840 – 1926).

His works offer a great first impression of the relationship between art, and the beauty and romance of a garden sited within a French landscape.

Over the century past they have left a lasting impression through their pleasing and emotionally satisfying imagery. He brought a new sensuality and brilliance to his colour palettes. Light, he realized, transformed everything.

The drama of light, the depths of its dimension, the boldness of his composition and the exquisite gradations of colour he preferred infused both his painting and plantings in his glorious garden at Giverny in Normandy.

Monet’s Garden: The Musée Marmottan Monet, Paris is an exhibition that will be on view at the National Gallery of Victoria (NGV) from 10th May, until 8th September 2013.

This highly anticipated show is a 2013 Melbourne Winter Masterpiece Exhibition and will feature Monet’s most well-known works, from a stunning suite of enormous water lilies paintings to his iconic garden motifs, as well as some rarely seen late paintings.

NGV Director, Tony Ellwood, said “We are thrilled to collaborate with the Musée Marmottan, home to one of the largest collections of works by Monet in the world, to bring these masterpieces to Melbourne for the first time,”

This show will offer a selection of some fifty of the 300 painted views of Monet’s garden, conserved for the French people and the world in this highly specialised museum.

“This is set to be a spectacular exhibition and I look forward to welcoming it to Melbourne in 2013,” the Premier of Victoria Mr Baillieu said. “Monet is one of the great figures of art history, the father of Impressionism and the creator of works of extraordinary beauty and wide appeal” he observed. 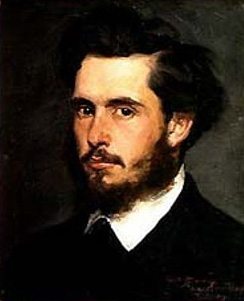 From the incredible beauty of the wonderfully flowering wispy wisteria delicately draped over the Chinese style bridge over the pond, where his water lilies grew to perfection, or the beauteous vision of blossom on apple and cherry trees from Japan, roses on the arches in summer, Monet’s Garden at Giverny in France is renowned for the diversity and divine aspects of the flowers that herald the arrival of each new season.

Monet never tired of looking at his garden from his bedroom window. Today it draws thousands of tourists a year to wonder at its many splendours. It is a great draw card in the north of France, a sea of fresh green dotted with the pale pink foam of cherry blossom and mauve mist of wisteria in the spring and summer.

The garden for Monet was all about the rhythm of nature refreshing the heart.

A commissioned installation, integral to this exhibition, will immerse the viewer in the beauty of Monet’s garden as it is today, presenting powerful impressions of it from sunrise to sunset.

Other works rarely seen, will also allow the viewer to gain a lasting impression of the countryside that seduced and held Monet captive from the moment of his arrival and for the rest of his natural life.

The life and soul of his garden was inextricably bound up with that of Claude Monet, the painter after whose impression of a sunrise over water in 1872 had given the artistic movement its name. The journey they took through life was one they took together. The age of Impressionism in Art is certainly all the rage right now around the world, as a new generation is introduced to its unique qualities, aesthetic beauty and popular appeal. At the Metropolitan Museum of Art in New York Impressionism is currently being aligned with both fashion and modernity.

Last year the Monet’s Garden show at The New York Botanical Garden, where they recreated flowerbeds from his garden at Giverny as well as aspects of his waterlily pond, was also a huge hit.

Claude Monet celebrated the art of gardening in the creation of his now world famous garden at Giverny, in Normandy. Just like we do today Monet subscribed to all the gardening magazines and nursery catalogues. He went to flower shows visited other gardens, swapped plants with his friends while nurseryman and editor Georges Truffaut supplied him with many of the plants he needed. Monet had a comprehensive botanical library and throughout his life remained faithful to the stalwarts of French gardens, beautiful hybrid tea roses, delicious dahlias, gorgeous gladioli and generous geraniums. In this glorious place Monet wove all the threads of his creative life together to become part of the fabric of his garden.

His view and tastes expanded to include rare collections of orchids and water lilies. The garden was always imaginative and unique. It was conceived and planted in the spirit and ethos of an Impressionist painter. The flowers he was said to have loved best were poppies, sunflowers, nasturtiums, asters, Christmas roses and jonquils.

He never tired of painting them and they are still growing at Giverny today.

The Impressionists thought beyond the square, brilliantly capturing life in special places indoors and outdoors where nature ruled in all her spectacular glory. They wanted society to become forward thinking and provided subjects that were either dark or light, en grisaille or in full glorious rich sensuous colour.

They recorded them at play, at the opera, the ballet or the horse races, at home, in their gardens, their bedrooms and from under their beds, whether undressing, dressing or, buck naked in their bath and much more. During the latter half of the nineteenth century (1874 – 1886) many people found it difficult to cope with this new vision. It was all about capturing the moment, the joy of life and revealing many of its secrets or truths.

The Impressionist promise was, that if you did decide to follow their lead you would at least be able to trust you were mostly seeing an optimistic view of life, one lived as it really was.

To remain true to their ideals, the spirit of their movement and the execution of their art they jumped onto new fangled trains weaving their way across the countryside from Paris to other cities in France to capture many more impressions of the elegant less is more aesthetic, with just the right amount of style we have come to expect from French people.

The Impressionists paused in the countryside, capturing the light of the sky in Normandy where the intense colour of red poppies flowering in its fallow fields remind us of war and peace. They recorded the haze leaching off lovely lavender fields in the heat of a Provencal summer, as it releases its heady calming fragrance into the cool night air. They floated on boats along the Seine, including Monet’s, which was especially fitted out for the purpose.

They followed the river as it meandered in circuitous routes through the city of Paris having picnics on its banks while recording all sorts of places from power stations to railway stations for posterity.

When they reached the seashore they scrambled over slippery moss covered rocks to capture the marvellous magic of the ocean and rocky formations along the seashore. This was where the turbulence of the waves echoed the up and down aspects of their life and its times. 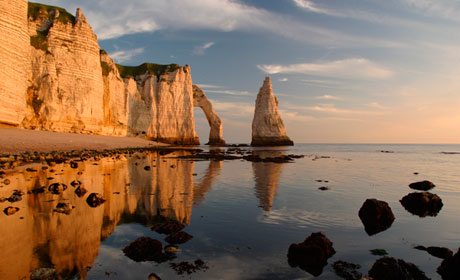 The waves were no doubt as unpredictable as the swelling number of tourists clamouring to see them at work, giving them a whole lot of trouble while helping to establish their all new celebrity status.

They captured the misty magic of valley mornings by walking through and even on water to record the ice, the flash floods and rotten rainy days.

At Paris in places such as the legendary Montmartre and Le Moulin de la Galette, the impressionist painters turned their focus to recording people in pleasant places coming together to enjoy dancing, singing or a night out at the opera.

Dear Monet who helped found the movement was the most consistent and prolific practitioner of impressionism outliving nearly all his colleagues. In old age and with the use of special glasses to help his fading eyesight at the end of his long career Monet managed with an extraordinary set of paintings of his beloved water lilies in his garden at Giverny, to keep the game going as long as possible.

Gifted to the state some of them have been on display in the Orangerie at the west end of the Tuileries Gardens at Paris since 1927. They ended up inside a building designed in the classical style, which is all about order, which is the opposite of what Impressionists were on about.

If we take the other meaning of classic, which is of the first or highest quality then we could see that if his art was to have a lasting impression then it was perhaps the ultimate compliment to his genius.

Impressionism because of Monet’s efforts, never really ended. By defying all the odds including blindness he managed at the end to continue being radical, making sure the Impressionists style always remained as it always had been, full of possibilities. This will be the tenth Melbourne Winter Masterpieces exhibition at the NGV since the series began in 2004 with The Impressionists. It has since attracted more than 3.5 million people to Melbourne’s cultural institutions. Monet’s Garden will be presented alongside Hollywood Costume at the Australian Centre for the Moving Image in 2013.

This show will also honour the very special relationship Melbourne, and indeed Victoria has with France; forged through her history, society and culture. During the height of the age of plant hunters in 1800 explorer Nicolas-Thomas Baudin (1754-1803) proposed an expedition to Australia and as first Consul Napoleon agreed. Baudin claimed Australia’s southern coast for France, calling it ‘Terre Napoleon’.

Although he died on the voyage home a delivery of plant seeds in 1804 to Empress Josephine meant that she grew the first Australian plant in Europe at Chatéau Malmaison.

The Musée Marmottan Monet was founded in a hunting lodge of the Duke of Valmy on the edge of the Bois de Boulogne. He filled it with the paintings, furniture and bronzes that he loved. Jules Marmottan purchased it and left it to his son Paul who had a huge interest in Napoleonic era art and furniture and bequeathed it to the nation.

It opened as a Museum in 1934 and although a showcase for the pieces from the first empire in 1957 an important collection of works by Manet, Monet, Pissaro, Sisley and Renoir were gifted and then in 1966 Claude Monet’s second son Michel, left his collection of his father’s works, creating the largest collection of Monet paintings in the world. Should be a great show.

“If you like it, then you shoulda put a ring on it” Beyonce’ told all those single ladies what needed to happen, and the smart boys listened! So what comes next? In most cases, if the ring has already been chosen, then it’ most certainly the dress! I think most…