Monuments Men in today’s context, is first and foremost an event movie based on a factual and extraordinary endeavour that took place towards the end of, and following World War II. The script, written by actor George Clooney and co-writer Grant Heslov, was inspired by Robert M Edsel and Bret Witter’s 2010 book The Monuments Men: Allied Heroes, Nazi Thieves, and the Greatest Treasure Hunt in History.

The movie, the book and the work of the Monuments Men have at their essence an important idea; that in order to improve quality of life we must continually reassess and revisit our past, in order that we can continually re-learn the lessons and secrets of life through history.

If we do they will help us to invent and to imagine a better future. The story is about those who executed what is considered the ‘greatest art heist in history’. The Monuments Men were in a race against time, as valuable artworks went missing during the armed conflict in Europe towards the end of World War II.

The rescue was also about identifying the ideas and philosophies we are prepared to defend by any means and if we do really have the courage of our convictions when our lives, our heritage and what we believe in really come under threat.

There was no precedent for the Monuments Men team to be formed.

This was the first time in history that any army had shown respect for the art heritage of the modern world during warfare. This story is about the heroic efforts, in the great scheme of things, of only a handful of people. In reality they actually numbered about 345 men and women from 13 nations, who all volunteered to carry out and complete what was a truly great assignment.

They were undertaking an amazing and Herculean task.

To find, to protect and to restore eventually to their rightful owners (individual or institutions), the incredible works of art appropriated by the Nazi regime as they marched across Europe destroying other people’s lives, looting the documents of their history and their cultural artifacts and symbols.

Modern artist Gustav Klimt’s stunning ‘gold portrait’ of Adele Bloch Bauer, handed over to Hitler by the Austrian National Gallery was returned to her previous family owners in 1998. A great many works of art (some 5 million) were eventually recovered using only limited resources and authority. The search for other significant works lost now for over 60 years is ongoing, because in real terms there are hundreds of thousands of items still missing and unaccounted for.

Many have been identified, including Raphael’s Portrait of a Young Man (pictured) dating from 1514.

Then there is a portrait of Manet painting in Monet’s garden by Claude Monet, sculptor August Rodin’s bronze bust of Mrs Rodin, Carvaggio’s portrait of a young woman and Van Gogh’s painting of himself on his way to work to name a few.

How good would it be to find even one of them?

You can help by joining the hunt.

Monuments Men the movie and the book are also about raising awareness about the importance and value of the preservation of art.

By the middle the 20th century, millions of important objects were considered symbols of man’s greatest achievements to date.

The Monuments, Fine Arts, and Archives Program (MFAA), established in 1943 by the American army, was all about stopping the destruction of over 1000 years of accumulative history and culture.

All the works and documents it set out to save were regarded as being integral to the ongoing development of global society and cultures. It was General Dwight D. Eisenhower who facilitated the work of the MFAA by forbidding looting, destruction, and billeting in structures of cultural significance and ordering his forces to assist where possible.

Fighting a war and at the same time aiming to reduce damage to cultural monuments and property was a major step in our cultural and societal development.

Works of art were not the only important items taken and today The Monuments Men Foundation is still searching, while also looking for important documents, manuscripts, and books

Interestingly several people on the staff of The Metropolitan Museum of Art before and after the war were integral to the ‘Monuments Men’.

He would play a central role in the development of the Met’s Cloisters branch museum in upper Manhattan, prior to enlisting in the United States Army in 1943.

He was appointed to the MFAA under the Civil Affairs and Military Government sections of the Allied armies established in 1943.

He pursued the mission until 1946, covering a broad territory across Normandy, France, and Germany. Walking to Work a self portrait by Vincent Van Gogh, lost during World War II

In the process he received several military decorations, including the Bronze Star and Croix de Guerre.

After the war he returned to The Met and was responsible for such major acquisitions as Rembrandt’s Aristotle Contemplating the Bust of Homer and Robert Campin’s Merode Altarpiece.

He also wrote his memoir Survival: The Salvage and Protection of Art in War (Abelard Press, Inc., 1950), providing a vivid and lively account of his war years.

Rorimer’s story will be an integral aspect of a display on view in The Met Museum’s Thomas J. Watson Library from January 31 through March 13, 2014.

Among the documents, letters, and other correspondence on view at The Met are: wartime photographs of Mr. Rorimer; a pocket notebook that he carried during his service in Europe; index cards and photographs he compiled that document damaged European monuments; the first edition of his war memoir Survival; a copy of a May 1944 order by General Dwight D. Eisenhower authorizing the Monuments Men; a photograph and speech from a 1946 event at the Metropolitan Museum honoring General Eisenhower for his role in protecting works of art; and promotional materials issued by the Met about post-war exhibitions of restituted paintings. 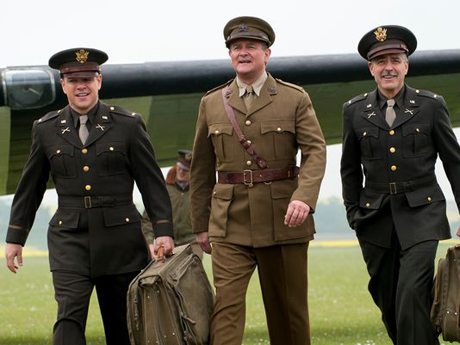 Then there were professors at esteemed universities such as Harvard, Yale, Princeton, New York University, Williams College, and Columbia University, among others

Just to find out who the initial people were that all clubbed together to save our collective global heritage has also been part of a documenting project.

It has required massive ongoing research for a number of groups since World War II ended.

These include The Harvard Group – members of the Harvard faculty and local citizens who established the group after the fall of Paris in June 1940 in order to provide expertise on cultural matters during the war).

Then there is the American Council of Learned Societies comprising of single focused scholars, art historians, antiques and art collectors and artists aided financially by the Rockefeller Foundation and headquartered at the Frick Art Reference Library. Their research is now in its seventh year as they appeal to the public for help in completing biographies of the people involved and listing them for posterity on the Monuments Men Foundation website.

They both aided and emboldened American President Franklin D Roosevelt charge to ‘the Roberts Commission’ established on the 23rd June 1943 to ‘promote the preservation of cultural properties in war areas, provided the mission did not interfere with military operations. … they wouldn’t do it if they didn’t like the screenplay George Clooney declared to journalists…”… I flew to Australia for one day to hand Cate (Blanchett) her script.”

Blanchett said “I knew that work had gone missing and that the Nazis had collected art and stolen art and destroyed art,” revealing recently that she had been entirely unfamiliar with the efforts of the Monuments Men until she received the script from Clooney, who also directed the movie.

“If  you destroy an entire generation of people’s culture it’s as if they never existed’.

Monuments Men is coming soon to a theatre near you.