Moonlight, the American Golden Globe award winning best movie of 2016 is one that you may truly not want to see, because it is a raw, emotional, truly agonizing tale of one man’s search to find out who he is.

A first release for 2017 in Australia, to say the least Moonlight is emotionally complex and challenging, helping us to understand difference.

A movie in three parts entitled “Little,” “Chiron,” and “Black”, the attitudes and prejudices Moonlight reveals are an indictment on our society. While this is essentially a coming of age story specifically about a black man, it will resonate for a long time with people from many different creeds and cultural backgrounds.

For my companion and I at the preview, the experience of watching the story it tells, about the pain and beauty of wanting to be in love or to feel love personally, was both truly distressing and heart wrenching. We could all choose to take knowledge of the events that happen in Moonlight as an opportunity to gain an understanding of how societal attitudes can and do impact on individuals and whatever our background, cultural differences or sexuality, do something positive to contribute to facilitating lasting change.

Moonlight is very much a tale that needed to be told and Director Barry Jenkins does that with rare insight in his ‘daring film, born of his harrowing childhood’.

This story is all about the nature vs nurture argument, graphically informing us how much the environment that surrounds us and that we live in as a child can affect the whole of our lives until we can grow up enough to make our own choices and change it.

While that can sound simple, it is more than complex as we take our lead not only from experience but also example.  Many people have defining stories to share. Moonlight tells the tale of the evolution of one human being as told through the story of Chiron who when growing up in the late 80’s and 90’s discovers that the majority of society have set themselves up as his judge and jury.

At first a child about nine years of age, who is struggling with how and why the world has already judged him before he has found out who he is, Chiron (Alex R Hibbert) is like all those other ‘black’ boys who are said to look blue by the light of the moon.

As we discover, the movie like the colour blue has many shades and nuances to the point that I am sure many of the people in the audience around us felt totally exhausted, speechless and often dispirited as they were drawn so cleverly by the director into putting themselves inside the young man’s skin. 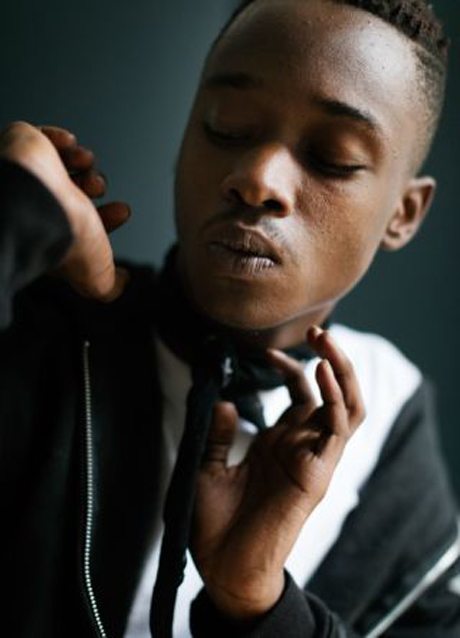 Equality, freedom and liberty don’t reign at all in Chiron’s America.

He has to face being ostracized for being different from the majority of children’s he’s attending school with every day.

He is also struggling to communicate with anyone around him.

He’s not only reluctant to speak but virtually can only form a few words at a time without breaking down.

Chiron hasn’t yet realised that he is gay, although the adults around him already know it and understand that this means his life will be torturous.

You might think his teachers should be able to recognize his struggle and offer him counselling, or some sort of help, but in the main it seems they are overwhelmed and just ignore him. His mother Paula (Naomi Harris) is a bitter disillusioned woman, On a daily basis she prostitutes herself to get the money to space herself out on drugs so as not to have to deal with her life or the day to day running of a household.

In doing so she completely neglects the health and well being of her young child, telling him to go away while she has men in the house.

As he has no friends, basically he has nowhere to go. He’s so isolated and so alone deep down that it is terrible to take his agony on board.

Despite attending school every day where other children and teachers surround him, no one really interacts with Chiron except one boy named Kevin (Jaden Piner). Then he meets Juan, a wonderful defining performance from Mahershala Ali – he was splendid. Juan is drug dealer, who seemingly lives his life with an honour code of his own.

Having observed Chiron being harassed and chased by other boys wanting to give him a beating, he comes to his aid. He takes him home to meet his partner the kind and giving Teresa (Janelle Monáe) who offers the young man food to fill his empty stomach and a place to come if he needs help.

Chiron is in turmoil about trusting anyone at all, because the prime example of trust is his mother, who always lets him down. So how can he know or hope that what Juan and Teresa say is true or will remain the same. 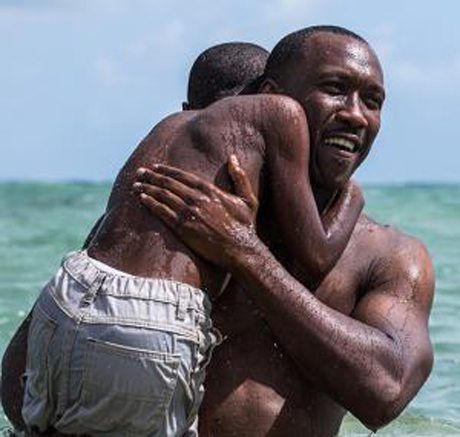 How do we know if Juan is only grooming him for more sinister purposes and if he should just run? His mother thinks he is, and snatches him whenever she finds Chiron in Juan’s presence. He has supplied her with drugs after all and she blames him for her addiction. For Chiron however, his relationship with Teresa and Juan is the only a continuing acquaintance in his life where an adult couple offer him empathy and some sort of security.

The first defining moment in their growing relationship takes place when Juan takes him to the beach where he gives Chiron lessons on how to swim, teaching him to float first by supporting him to lie on top of the waves until he finally relaxes and gives himself up to the moment. The second happens when sitting with Juan at a table, asks him what a faggot is and if he is a faggot. There is no music playing here, the audience is left out in the cold, frozen in their seats. Juan attempts to explain in a gentle way helping their trust issues, but tearing him completely apart because he knows this kid’s life has now forever changed and will irrevocably advance forward towards even more misery.

Then the trust established is violently wrenched away when we discover Juan has been killed, a reality we don’t witness but only learn after the fact. In the second part, Chiron (Ashton Sanders) is now a teenager marked by all his classmates, except the talkative Kevin (Jharrel Jerome) the friend he has acquired, despite himself.

Things at home are if they can be, only worse. His mother Paula is totally spaced out all of the time, contributing absolutely nothing but angst in her son’s life.

Teresa and her home is now his only place of refuge, and despite her telling him he can stay whenever he likes, he’s hesitant to take her up on the offer, unless things are really very bad indeed. He’s now also being protective of the only kind female influence on his life.

Kevin is living near a beach where Chiron goes to visit prompting him to remember Juan and the moments they shared swimming in the sea. After tenderly dealing with Chiron by giving him his first and only experience ever of what the promise love could be. The next day back at school Kevin follows the school bully’s orders to beat his friend up, breaking both his nose and his spirit completely.

So much so Chiron won’t heed the School Headmaster’s advice to press formal Police charges against his attackers.

We walk with him from home to school after his wounds have healed, as he progresses along the corridors and through the doors leading to his classroom.

There he deliberately puts down his bag, picks up his chair and breaks it violently over the back of his worst tormentor who is knocked to the ground unconscious.

The next think we find out is that he’s being led away by Police to answer charges drawn against him and we are left to imagine what happens. The next time we meet him Chiron (Trevante Rhodes) he’s a splendid muscled up and outstanding looking, although withdrawn adult, whose face doesn’t at first give away who he really is. Paula whose mind is deeply affected is now in a home where he visits her often. Her life is full of regret.

His only ever male role model Juan now fashions his way of earning a living, being the king of drug traders in his neighbourhood, driving a flash car with a ‘crown’ on the dashboard, he quietly reigns supreme Then one day he gets a phone call from Kevin (Andre Holland), which throws him into a complete spin as his coming of age story takes a whole new turn.

Kevin tells him how he’s been in jail himself, now has a child even though he’s not with the mother, and is a chef in his own modest restaurant in Miami.

Curiosity prevails for Chiron because he has only known that one brief moment of pleasure shared so long ago with Kevin and so he decides to go and visit him, despite the terrible beating he gave his ‘friend’. Trevante Rhodes is truly outstanding as the adult Chiron. In just one third of this movie and with the camera following him up close up and personal; we can see the deeply etched pain in every aspect of not only his face, but also in his whole demeanour.

His final meeting with Kevin is indeed torturous, especially when Chiron finally lets down his guard informing him that the one defining moment of love they shared, is really all he has ever known.

My companion and I were quite overcome and emotionally, totally undone.

It seems that this year’s Spring race wear trackside will be all about curvaceous lady like silhouettes and pastel shades. At Flemington Racecourse in Melbourne for the Spring carnival in 2012, including the great Melbourne Cup Day, they are celebrating all the style and glamour of 50 Years of Fashion…