As a tribute to Australian potter Janet Mansfield OAM (1934 – 2013) Mossgreen on the High Street at Armadale in Melbourne, will hold an exhibition of Australian ceramics from 1st February to 22nd February 2014.

Curated by Prue Venables, the Mossgreen ceramics exhibition will contain works by many of today’s leading potters, surveying some of the exciting and inventive work Mansfield encouraged during her lifetime that was influenced by her and her legacy.

An award winning potter on every level Mansfield enjoyed her formative years during the swinging 60’s in Australia. Over her lifetime she offered 35 solo exhibitions of her work in Australia, Japan and New Zealand.

The Japanese aesthetic in pottery was one she embraced wholeheartedly, knowing that as part of the philosophy attached to all their art works, only those who mentally complete the incomplete can discover true beauty.

Mansfield also knew we can only complete the picture if at first we understand that the virility of life and art lays in its possibilities for growth.

Works by potter David Pottinger reflect that heritage. He seeks to distill form and technique to express the elemental nature of the medium of porcelain itself; malleable, tough, practical and lyrical. The clever and uniquely Japanese thing to do is to borrow heavily from other cultures, re-interpret and make it your own, which is what happens in the world of ceramics, each new artist inspired by the canvas of clay that they can shape and model with their own hands.

David Pottinger’s ceramics reveal that his artistic expression is reflected in how he examines the volume and surfaces of his hand built forms.

He practices Nerikomi’ (or ‘Neriage’) a traditional Japanese decorative technique that involves layering and stacking of his coloured clay bodies (porcelain), and then cutting or slicing through the clay to reveal delicate striated patterns.

What you arrive at is a form that explores the essence of the Japanese aesthetic through the interplay of colour, tension, rhythm and pattern.

He has gradually evolved his work over the years since he began to achieve in maturity a sense of simplicity and timelessness, one we can all relate to. Bruce Nuske’s teapots, which emerged in 2013 with their curved spouts, imaginative lids, handles and decorations, are about brewing much more than tea. He is using the subtle understanding of materials he works with and the techniques he employs for their abilities to appeal.

They are an expressive aspect of his lifelong passion for keenly observing botany and zoology and have a confluence of Oriental and European bloodlines.

They are great starting points for stirring the imagination. Conscious and keen observation as well as an appreciation of wild nature inspires the creator of a Japanese garden and Fiona Hiscock is motivated by traditions surrounding botanical illustration, especially lowers cultivated in Australia’s early colonial period.

They are often a source for her inspiration, as well as pieces used in daily domestic rituals of the past.

She exaggerates the scale of their form and gives them prominence and position as individual items of beauty.

The meanings behind the motifs she uses are not given rather they gain associations for the beholder, borrowing from their own experiences and memories.

Hiscock is inspired by the themes of the seasons of life to which everyday objects bear witness. Pippin Drysdale merges a love of landscape with a sense of time, space and place.

Her finely crafted porcelain vessels represented in all the galleries around Australia, draw their inspiration from the overtly romanticized idea of Australia as a wide brown land.

She has a commitment to engaging with cultural, social and political agendas as she surmounts the creative challenges she often gives herself.

Her vessel forms have a formal simplicity and her responses intuitive and emotional rather than prescriptive and defining as she expresses her feelings about her surroundings and her country.

Her surface painting offers far more than mere decoration. Its vigorous intensity strengthens and gives emphasis to her wonderful forms. 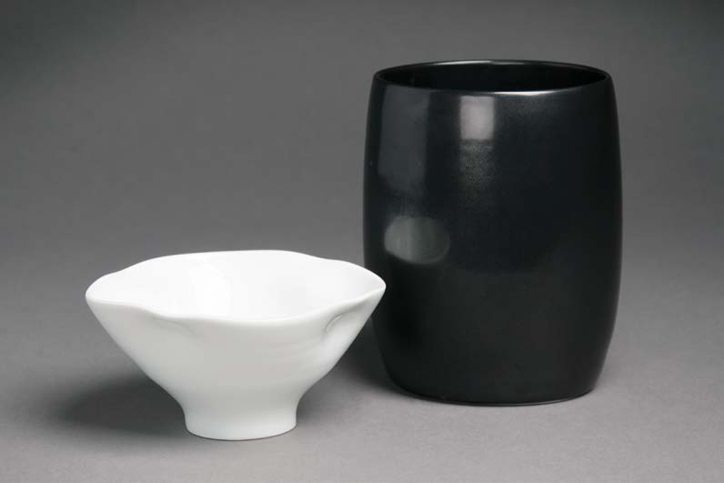 Prue Venables the curator of the show, is also offering examples of her own work. Initially studying music and science, her career in ceramics began when she attended a course in London.

She loves the translucency of porcelain, which captivates as light dances on its surface and invites an exploration of the perfection of form.

She is all about ‘a search for simplicity and quietness, an essential stillness that she finds in the porcelain made in France in Limoges and at Jingdezhen, China, where the very best of the Chinese ceramics of the famous Ming period were fired.

Her graceful forms, like many others in this very stylish show, will embody an interaction between sculpture and space and give us all an opportunity to contemplate or reflect on an inexhaustible exploration of place and natural elements. Mansfield’s colleague, potter Owen Rye said of her after her passing; …‘her devotion to ceramic art, personal vibrancy, intelligence and generosity of spirit made the work of makers, thinkers and writers throughout the world feel more connected, thoughtful and meaningful’.

The group of talented artists gathered for this terrific tribute show by Mossgreen will be honouring Jayne Mansfield’s legacy. *The Waste Land by T.S. Eliot

Captivating free-spirited violinist Patricia Kopatchinskaja is a joy to watch as she performs Bach and Mendelssohn concertos in her signature barefoot style.