Debuts are important; life events that help us measure time – before or after: first day at school, first kiss, first marriage and could be, first divorce, are all easily recollected timeframes which allow other memories of people and places to be revisited in a logical order.

Recently I enjoyed an outstanding item on my ‘Debut Clipboard’; attending the Mother & Son Media Event.

I clicked on ‘Sounds like Fun’ and accompanied The Circle Ed. Carolyn to the Comedy Theatre, Exhibition Street, Melbourne for a preview of selected scenes from the new play, Mother & Son.

We also had the chance to interview stars of the show – Noeline Brown, Darren Gilshenan, Shane Jacobson and Nicki Wendt.

With these really, really, great Australian actors performing vignettes from the show along with the possibility of an interview with them, my media event debut was shaping up to be a stellar happening.

A little early, Carolyn and I were greeted by friendly staff from the Comedy Theatre and the well organised media rep, Linda Freedman.

Linda, explained the program, the actors would perform two scenes, there would be a break between scenes to capture stills or take videos and then it was okay to request to do interviews. The Comedy’s foyer filled up with media people; journalists and photographers, mostly guys carrying what looked like extremely heavy cameras – happy I write the words and don’t do the images.

Ushered inside, we were invited to choose a seat. Seated on the aisle, three rows from the front it was seriously thrilling to be almost able to touch Shane Jacobson as he chatted with the producer while waiting to be called on stage.

I tried not to stare and if you would like to know, Shane, in the flesh, looks exactly as he does in his television and movie roles – a touch overweight, with a friendly relaxed manner and fresh faced good looks.

The play, based on the popular television series of the ‘70s which starred Ruth Cracknell and Gary McDonald. The stage had been set to reflect the life of a mother and son; the mother, elderly, cantankerous and demanding, the son, long suffering but unable to escape the role of carer, neither interested in updating the outdated prints and tatty furniture which surround a relationship flawed by frustration and misunderstanding.

Noeline Brown, who plays Maggie Beare, (the mother of the title) walked on stage aided by a walking stick. We were all shocked to hear that eight weeks previously, Noeline had broken her femur and the walking stick wasn’t a prop but a necessity.

An Australian entertainment icon who has performed on stage, television and film, Noeline is also Ambassador for Ageing and generously devotes time to fund raising for charity.

Noeline was joined on stage by Darren Gilshenan, who plays Arthur Beare (the son), Shane Jacobson, (Robert Beare, Maggie’s eldest son) and Nicki Wendt (Liz Beare, wife of Robert). The actors chatted quietly while waiting to begin the scene. It was quite amazing to see when at a sign from the director they dropped effortlessly into character.

Maggie frail but determined to have her say, Arthur quietly spoken, trying to get a point across but pretty much ignored by everyone.

Then there was Robert, self-important and blustery. 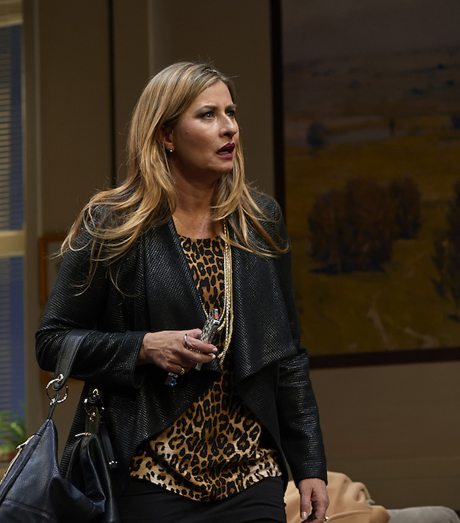 He was reduced to red-faced apology when confronted by wife, Liz, on the reason for and the calls recorded on his second mobile phone.

They were all believably great but Nicki Wendt as the affronted and confronting wife really lit up the stage – pity husband, Robert, if he didn’t come up double-quick with an answer to why he had need of a second mobile phone.

A break was called for photo opportunities. Then Noeline Brown and Darren Gilshenan took their places on stage to perform a scene from the life of a mother touched by Alzheimer’s and a son, who is forced by his brother’s selfish behaviour to put his chance for happiness on hold to care for his mother.

Noeline and Darren worked well together. I really wanted to say to Noeline as Maggie ‘Stop being such an old pain’ and advise Darren as Arthur to ‘Man-up and get a life’. More photo opportunities and then it was interview time.

We were lucky enough to catch Nicki Wendt as she came off-stage and we were delighted by her open friendly attitude during our interview. Have to agree and must add that Nicki Wendt does ‘awful’ very well.

I wasn’t surprised when Nicki revealed she teaches voice to students at the Victorian Opera. Liked Nicki’s performance a lot and hope to see her in future roles.

Producer, Spencer McLaren, nearby, we chatted to him about the appropriateness of the set and asked him where he sourced the stage fittings; among them, truly ghastly bird prints and a drabber than drab standard lamp which set the scene of black comedy and loneliness surrounding Maggie and Arthur’s lives.

Yes, we were right, they had trawled op shops looking for just the right pieces, the only modern furniture, a grey sofa which in colour and shape blended well with the other past-its-use-by furniture and accessories. Easy to talk to, Spencer told us that he didn’t start looking for a venue for the show until he was sure he could cast Noeline, Darren, Shane and Nicki in the play.

Darren Gilshenan, started his performing career in musical comedy. Quite surprising for an actor who has won awards for performances in serious drama both in Australia and internationally. To the role of Arthur Beare he brought a wonderfully mobile face and great comedic talent.

Loved his hopeful expression which morphed to uncomplaining depression at yet another example of his mother’s lack of appreciation and preference for brother, Robert.

We would have liked to interview Noeline Brown but time had moved on.

Noeline needed to rest before, as we discovered, a performance for a crowd waiting in the foyer.

So, did I enjoy my debut Media Event and will it be a benchmark for future events? I certainly did and it certainly will.

Debuts – you are never too old for them. Hope to share lots more of them with you.

Vengeance is mine saith the Lord. That’s not how the head of the Borgia family Pope Alexander VI aka Rodrigo Borgia (Jeremy Irons) sees it – ‘Vengeance is ours’