The Motya Charioteer is a very rare surviving example of an original Greek victor’s statue and is believed to represent the winner of a chariot race that took place some 2,500 years ago.

He was found in 1979 amid excavations on the tiny island of Motya on the western tip of Sicily, which was a Phoenician stronghold in ancient times and a region renowned for breeding horses.

Based in Motya the Phoenicians were able to raid a number of the Greek cities in Sicily, looting statues and taking them home to Carthage in North Africa.

It was excavated from amid what appeared to be hastily constructed fortifications, which the Phoenicians could have rapidly built when Dionysios I, the Greek ruler of Syracuse, invaded in retaliation.

In ancient times it wasn’t unusual to utilize statues or any other stonework at hand to hastily build up a barricade in times of siege.

He has been identified as a charioteer because of the long tunic he is wearing, the xystis.

It was a garment that covered the entire body, and was fastened with a simple belt. Two straps crossed high at the racers back preventing the fabric from “ballooning” during the race.

The broad belt on to which the reins would have been fastened – on the statue were secured via fixings in the two holes in the belt at the front. This prevented the reins from being pulled out of the hands, but also dangerously, prevented the charioteer from being thrown free in any crash. 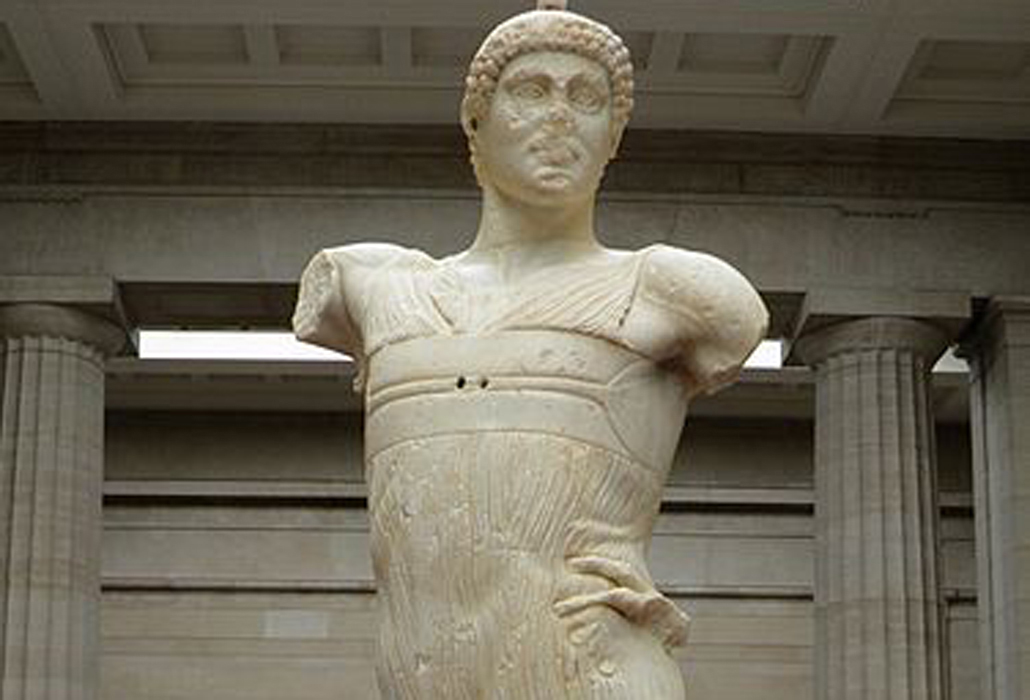 Today this amazing sculpture is regarded as a national treasure by Sicilians and thought by many to be one of the finest surviving examples of a classical sculpture anywhere in the world. 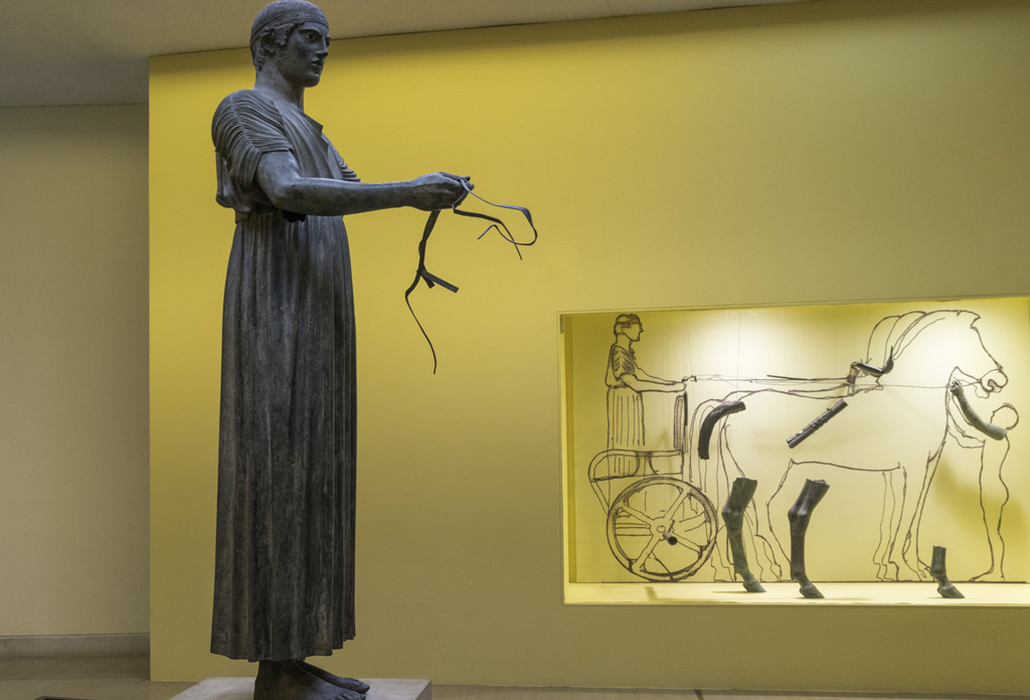 It resembles the more famous Delphian charioteer, which is not very much older.

Greek statues were created in three main materials, bronze, marble and chryselephantine (gold and ivory on a wooden base).

When they were produced originally they looked very different to the natural state of the stone we see them in today.

Their sculptors sought to imitate what they saw before them and coloured their flesh, hair and clothing as it would have been. 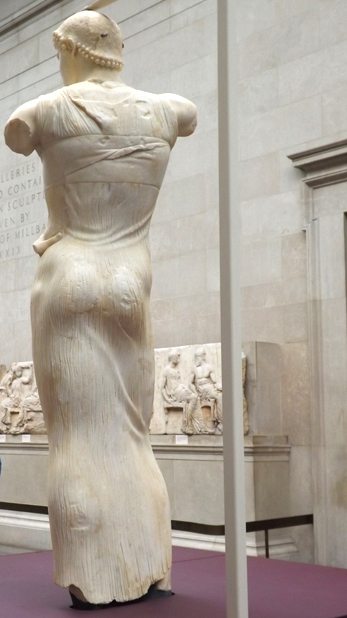 Ancient Greek poet and writer Homer’s Iliad includes an account of a chariot race, as part of funeral games held in honour of Patroclos, the Greek hero Achilles beloved comrade and brother at arms, before the walls of Troy.

Charioteering could be described as being the equivalent of today’s Formula One car racing with owners and sponsors – the race complete with laps, safety rails, etc.

The sculpture is believed to have shown a winning charioteer at the conclusion of a race, his body exhausted, yet standing proud and triumphant with a pushed out chest and erect head.

His hand digs into the flesh of a thrust-out hip, pulling the fine cloth of a long tunic into incredibly realistic folds.

The virtually transparent cloth clings to his body with the sweat and effort of the race.

He must have been formed by a very capable artisan. The veins on his upper arms still stand out with the blood coursing through.

Greek sculpture was the first, the only ancient art to break free from ‘conceptual’ conventions for representing men and animals, and to explore consciously how art might imitate nature or even improve upon it.

There was no conscious striving toward realism until it was understood as a possible and desirable goal and this began to happen during the sixth century BC.

Winning athletes in ancient games became super-heroes, were given massive home-coming parades, and public honours such as free meals and theatre tickets for life. Some were even thought to have healing powers.

They became celebrities, and could command prize money for appearances at festivals. The winner here would find a lot in common with our 2012 sporting heroes.

By the beginning of the fifth century before Christ the Greek pantheon of Gods were complete and the great myths about them had acquired a definitive form. Religious life revolved primarily around the cults of the ‘Olympian Gods Zeus, Hera, Poseidon, Athena, Aphrodite, Demeter, Artemis, Apollo, Hestia, Hermes, Ares and Hephaestus, and their place of abode was Mount Olympus in Northern Greece.

The Olympian Gods were honoured with offerings of various forms, from animal sacrifice to splendid festivals lasting two or three days. The God of wine Dionysus in particular, who may have seemed a shade marginal, was part of a concept or religion if you like far more concerned with ritual than dogma.

For over 1000 years, between 776 BCE and 395 ACE, citizens from all over the classical world flocked every four years to Olympia. Spectators came from as far away as Spain and Africa; long distances when travel was mostly on foot.

There was a public banquet for victors, and various private celebrations where the wine flowed and songs, revelry and victory hymns, celebrated the occasion. Athletes competed as individuals, although victory brought great honour to their home city.

Prime rewards of victory at the ancient Olympic Games, much as today, were fame and celebrity Victors were granted the privilege of having a statue made to be set up at Olympia, the oldest sanctuary of Zeus, which became a sort of athletic ‘hall of fame’. However, unlike in the modern Games where participating is considered a conquest in itself, in antiquity winning was the only objective. Coming second or third did not come into it at all.

Because of its thrills and dangers, chariot-racing was hugely popular and it was also the only Olympic sport in which women were allowed to take part, although only as owners of the teams of horses.

The Motya Charioteer is normally displayed at the Museo Giuseppe Whitaker, Motya.

With the Olympic Games set to start in London on July 27 I thought it only fitting to check out the designer that has been charged with the role of creative director of Team GB, Stella McCartney. This is the first time a high end designer has created sportswear for…