Author Arthur Conan Doyle’s masterful creation British detective Sherlock Holmes has been revisited artfully over the past decade through defining contemporaneous performances on television of his legendary character given by British actors Benedict Cumberbatch and Jonny Lee Miller and Robert Downey Junior at the movies.

Not all of us enjoy a favourable epitaph, especially when we have drifted away from the centre of action as Mr. Holmes has now done and it’s only his contemporaries who remember his famous cases. It’s that old adage, out of sight, out of mind, especially when in your dotage.

Mr. Holmes would be in danger of being completely forgotten, except that he has been immortalized by his friend by Dr Watson in his books, and in today’s world on his blog. We believe he’s perhaps still living at 221B Baker Street although in reality as we discover in this delightful movie, he really lived across the road to fool fans and followers until he retired to the country.

The book the story comes from is A Slight Trick of the Mind by American author Mitch Cullin, which has been adapted brilliantly for the screen by experienced playwright and screenwriter Jeffery Hatcher.

Mr. Holmes features acclaimed award winning British Actor Ian McKellen (b.1939) as our favourite detective during the closing chapter of his life. He is struggling while seeking to re-write the story of his last case before the mists of time ruthlessly descend upon him. As the film progresses we go in and out of the past and present with relative ease, such is Academy award winner William ‘Bill’ Condon the director’s fine achievement.

He has been on stage and screen throughout my lifetime moving and thrilling with his fine performances.

This one for me however, could be likened to a luscious rich icing on the complex cake of love and life. Close ups of McKellan’s face with all its crags and crannies are unsettling, giving us a feeling of our own mortality, especially as we witness his energy sapped by all the aches and pains; the physical inconveniences that come with ageing.

He convincingly captures a portrait of a man aged 93, despite being in reality a sprightly 76 year old, also perfect when you’re wearing a top hat and carrying an elegant cane.

Mr. Holmes has always been fascinated by nature although not really embracing it until now when we find him living life in a rambling old English farmhouse full of books and antique furniture.

He’s tending bees in the glorious obscurity one can only count on when living along the spectacular coast of Sussex overlooking the sea where there is a view of chalk white cliffs in the distance. 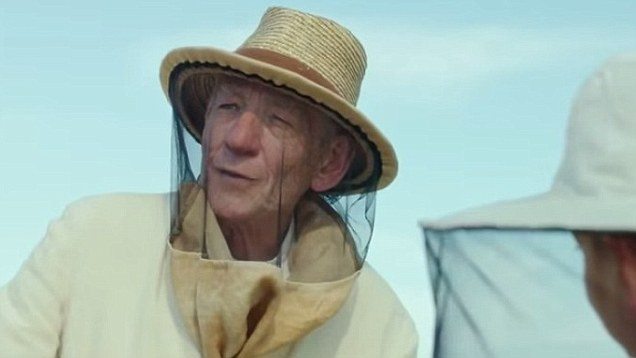 Roger’s mother is also worried her employer may be giving her son ideas above his station as they tend bees together and Mr. Holmes teaches him about the difference between bees and wasps and how to follow only the facts in order to solve a mystery. He wants and needs Roger’s help to discover why the result of his final case forced him into fleeing London for early retirement because for the life of him he cannot remember why and it is driving him to distraction. Even writing people’s names on the cuff of his shirt do not help him remember, especially once they are laundered.

Mr. Holmes is at that point in life where he’s been made aware that what he has achieved will ‘see him out’, and what has been is done, but as we also understand Holmes, we know he would never be content to go quietly or without having resolved his final investigation.

As voyeurs on this unfolding event, we first encounter our elegantly dressed hero as he returns home to a very green England from a long adventurous journey to Japan bearing a gift box wrapped in a textile as is the Japanese custom. It’s 1947 and he’s travelled there to meet a man who has written to him claiming to have an ability to extend life through a restorative natural remedy Prickly Ash, which he claims to be far better than the Royal Jelly that Holmes harvests from his beloved bees at home.

Mr Tamiki Umezak (Hiroyuki Sanada) asks all sorts of questions, including one for his mother who wants to know if he brought his famous hat” “Oh, the deerstalker” says Holmes, “… that was an embellishment of the illustrator of my book. I’ve never worn one!”

Mr. Holmes has many adventures in Japan, including a moving and distressing trip to Hiroshima to see the devestating results of America’s decision to drop the atom bomb and end World War II.

From the twitch of his eyebrows to the feeble gestures with his hands, the tilt of his head and the lost sorrowful expression he conveys as he struggles with his memory, we offer Holmes our empathy especially when he has a fall and we realise just how frail he really is. The ensemble cast surrounding MacKellen as Mr. Holmes are impeccable in their roles, especially the young Milo Parker who equips himself with distinction.

Laura Linney gives a beautifully paced understated performance, perfectly channeling an invisible English housekeeper who when she does become visible, lights up the screen with her smile and softness.

I loved the humour of casting Phil Davis as Inspector Gilbert, having been the villain in the first modern episode of Holmes on television with Benedict Cumberbatch. 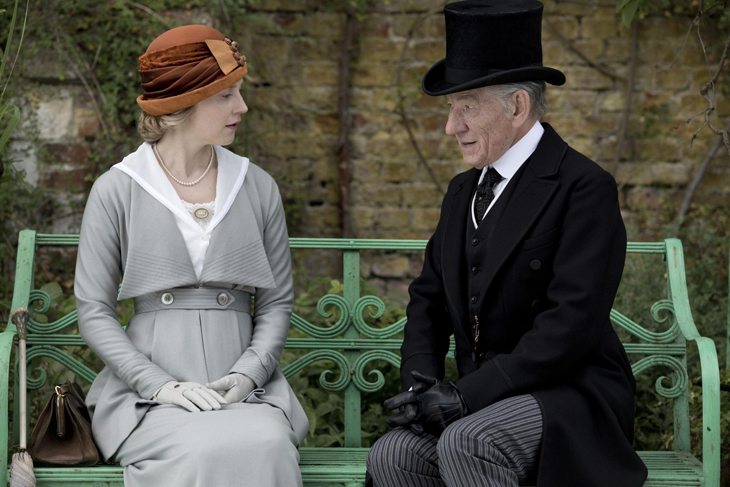 Roger Allam is Dr Barrie, Frances de la Tour is Madame Schirmer, John Sessions is Mycroft Holmes and Zak Shukor features as Masuo Umezaki with Patrick Kennedy as the awful Thomas Kelmot and the lovely Hattie Morahan as Ann Kelmot, the woman and wife who is the key to this mystery. None of us can censor our feelings but we can control our actions and in this tale, Mr. Holmes is in charge of his own, reliving a sad story of two people that met one day for only an hour really, but who within a short time discover their intellectual interests aligned as did their ability to recognise each other’s intense loneliness.

They should have forged an alliance for their mutual benefit, which would have gone against societal rules. It was discussed. However they turn each other down without understanding what their decisions will mean for those around them in the long term.

J’adored this movie for its fine craftsmanship and intelligence.

This is a mystery well worthy of the myth.

The Music Trust in Australia are working with energy, imagination and authority establishing a deep information source and advocates for school music education